The plan for the weekend was a long cycle down to Glen Affric, but Saturday morning was filled and Sunday didn't look like good bike weather. So I decided to brave the hags and bogs of Carn Tri-tighearnan again. To my mind, this is one of the most challenging Grahams about, particularly approaching from the north. This has more to do with the amount of deep peat hags to be negotiated than any kind of technical difficulty. In fact I doubt many go for a second ascent of it. Probably puts me in a pretty exclusive group, this being my 3rd visit to the summit. I wasn't going to bother writing another report for it, but these are the best photos by far I have from any visit.

The proper way to do this for me is by bike, as the starting point is less than 5 miles from home. The car was available though, so I decided to make a run of it, starting from the parking space just across the burn from the Finglack track. I jogged up past Finglack and through the woods until I emerged on the moorland. The track had been much improved since my last visit. 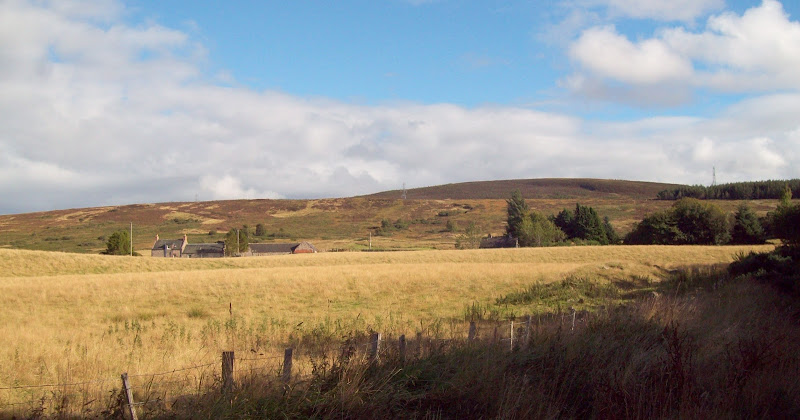 Strathnairn and the Black Isle:

The track leads right up Beinn Buidhe Mhor, making it quite a popular summit in its own right, particularly with locals. It took me 40 minutes to reach from the car, with great views out across the Moray Firth. 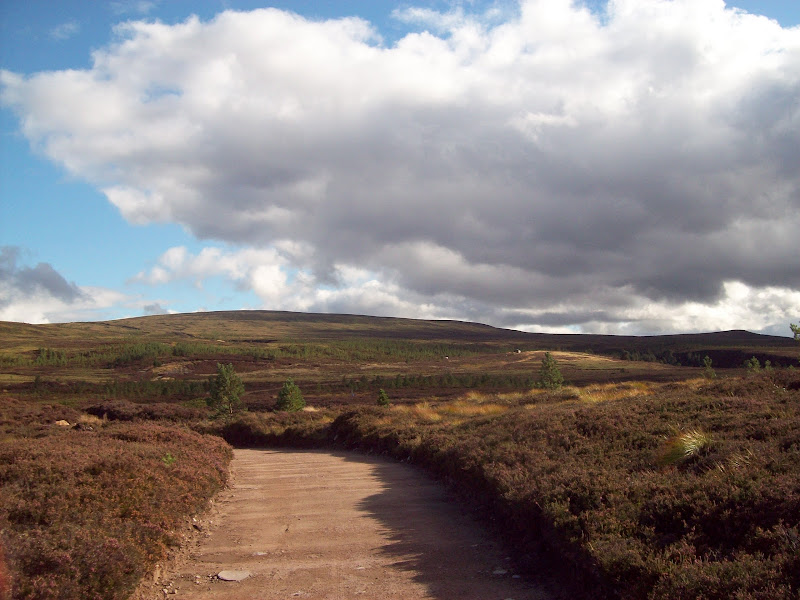 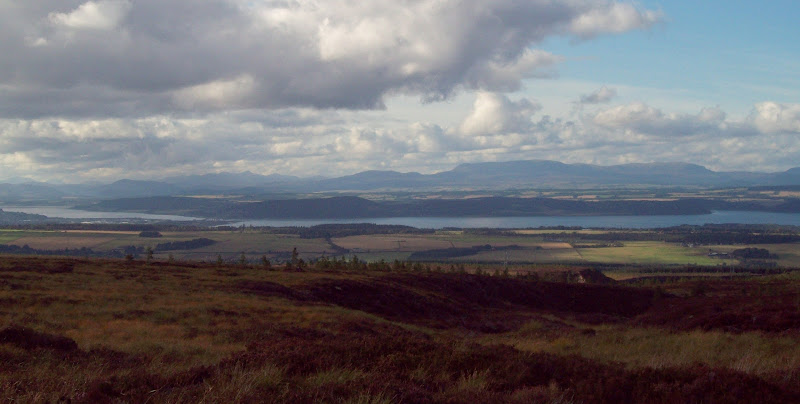 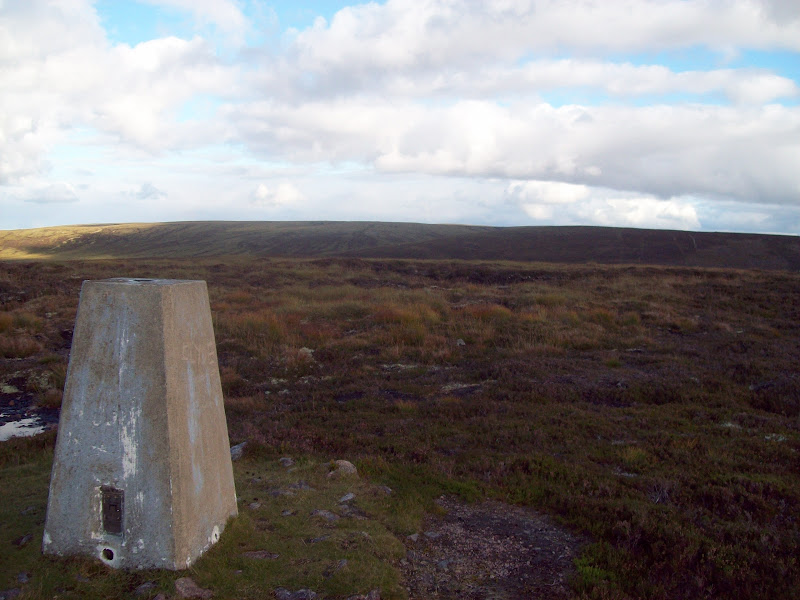 The air was reasonably clear and the earlier showers had passed, and I could see all the way north to Sutherland, with Ben Klibreck, Morven and Scaraben all clear.

Klibreck is fairly clear from here: 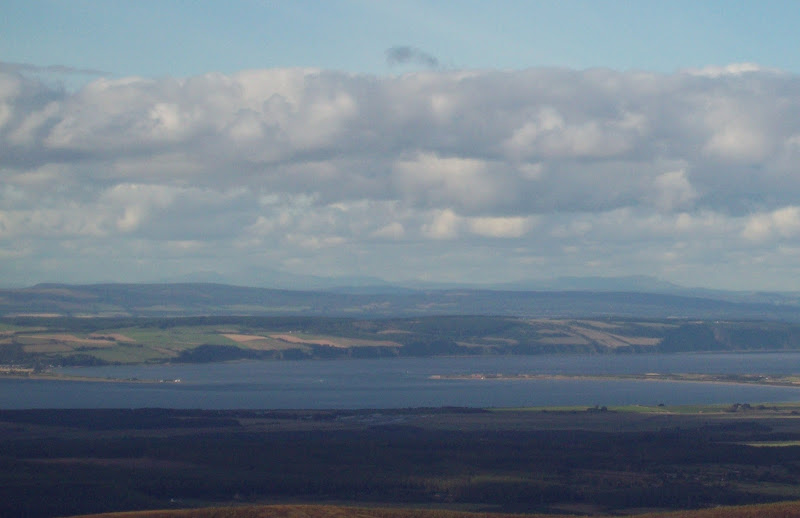 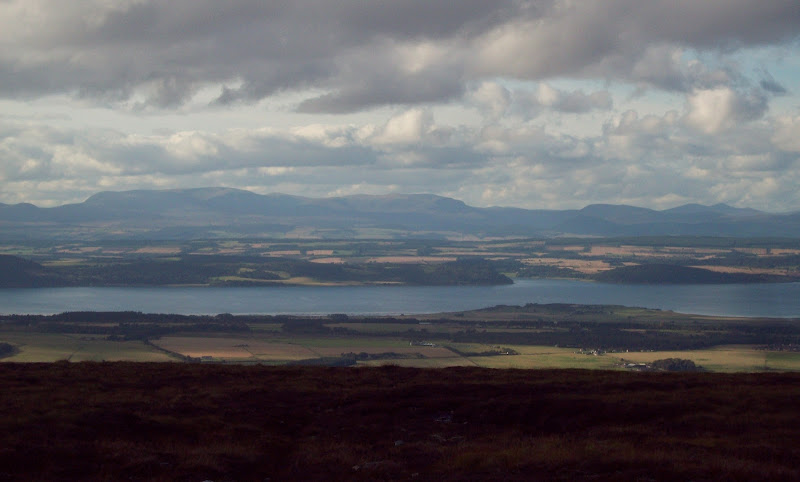 I left the track here and carried on jogging over short heather, using the occasional path cut through the deeper parts. presumably to ease access for grouse shooting. After crossing the Dalriach Burn, the steepish ascent up he side of Carn Dubh Mor put paid to the jogging nonsense.

Looking back to Beinn Buidhe Mhor: 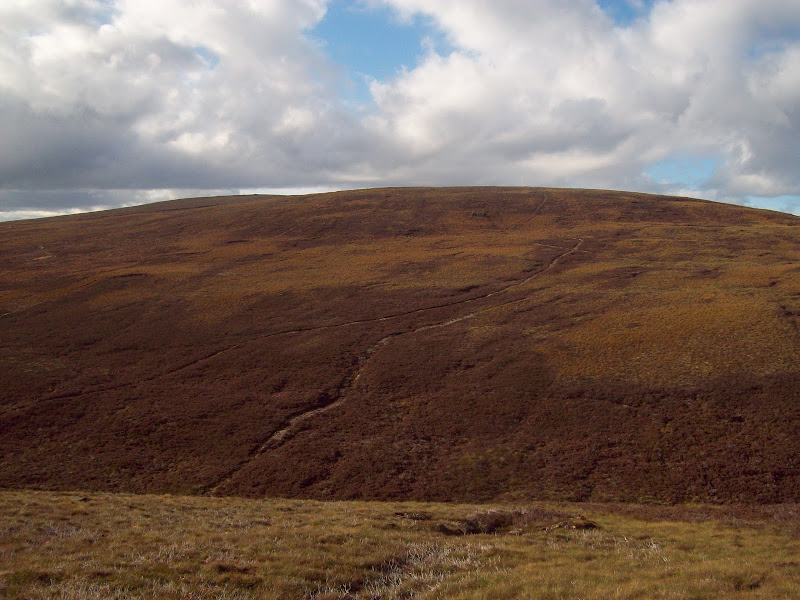 Back to the Moray Firth: 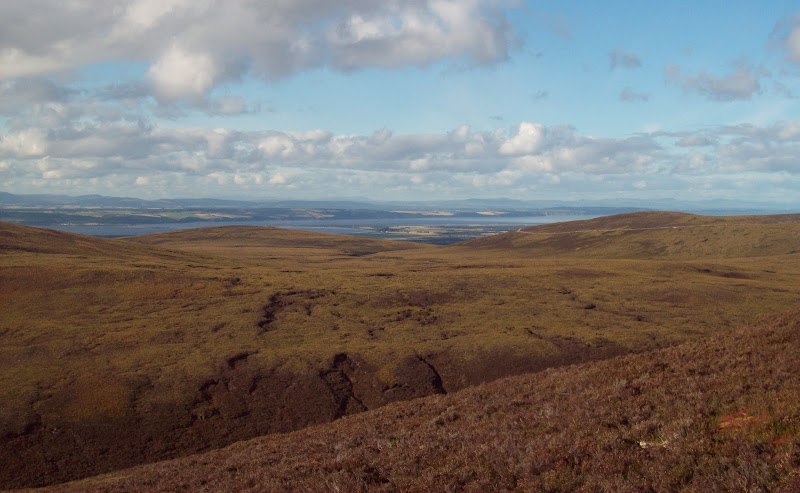 On Carn Dubh Mor, most of the route to the summit was visible. It looked a long way! Last time I was up here, there was no visibility and I had to take bearings the whole way across the plateau.

On the main plateau: 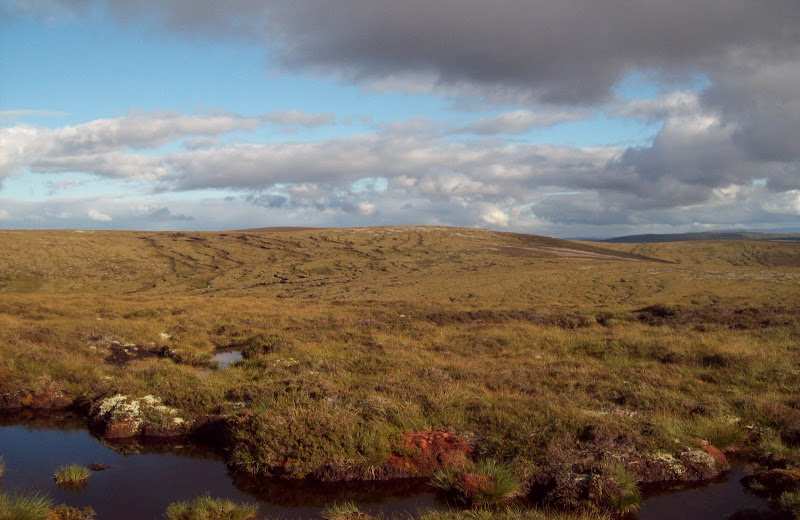 Once on Carn Dearg, he summit looked closer, but it was peat hags the whole way. A couple of new fences have appeared on this plateau in the last few years, although none of them are really worth following. Not sure of the purpose, as they aren't even proper deer fences, and there is nothing else up here. 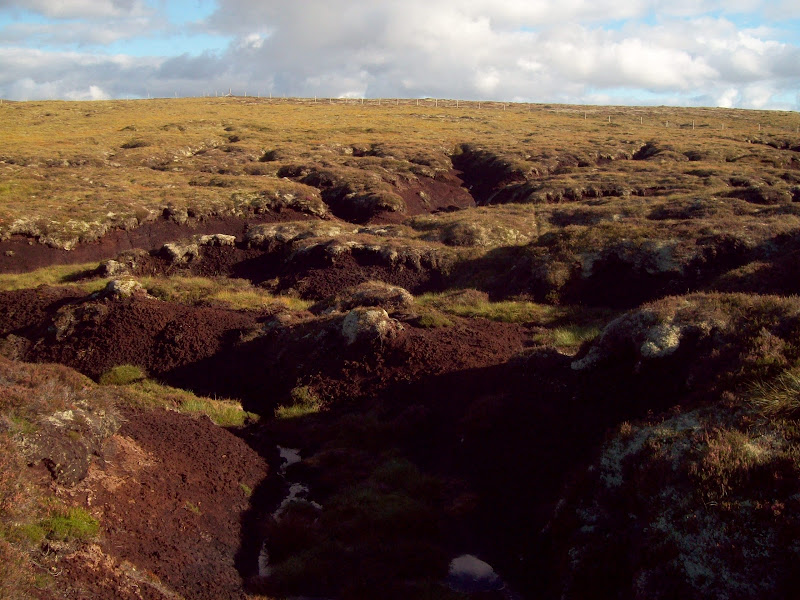 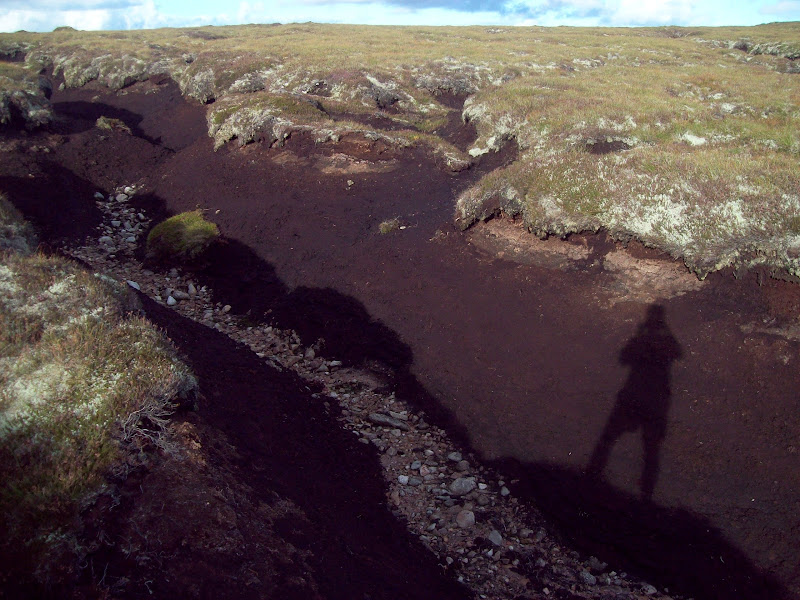 The Cairngorms finally appeared to the south as I arrived at the summit, with sun on Ben Avon and Beinn a Bhuird. I had jogged the occasional bit of plateau, but it was mostly about jumping in and out of hags, and hat taken me 90 minutes from the car. For all the roughness of the route, it wasn't particularly wet, and I still had dryish feet on top. 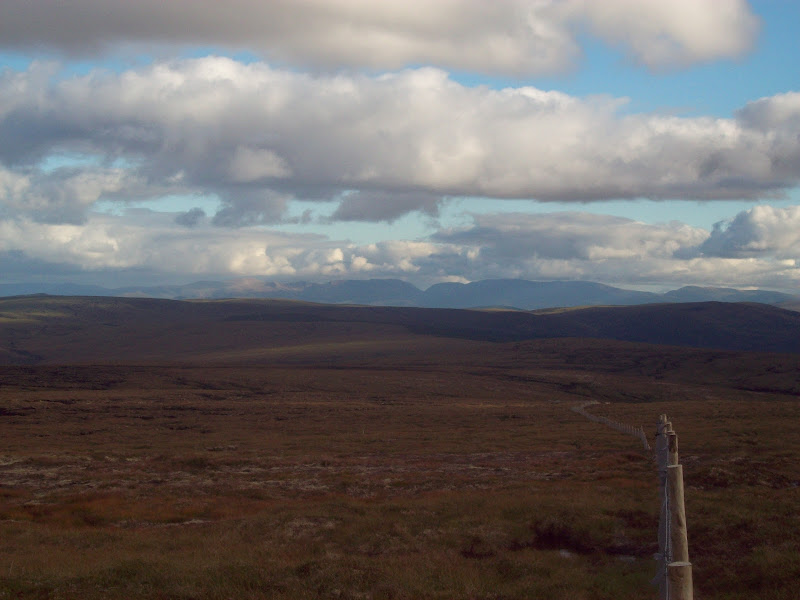 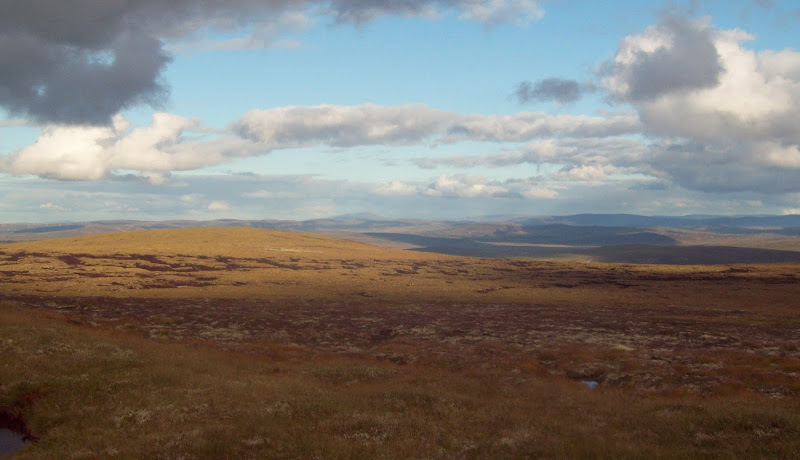 Can’t believe I got to the summit without getting too wet or muddy: 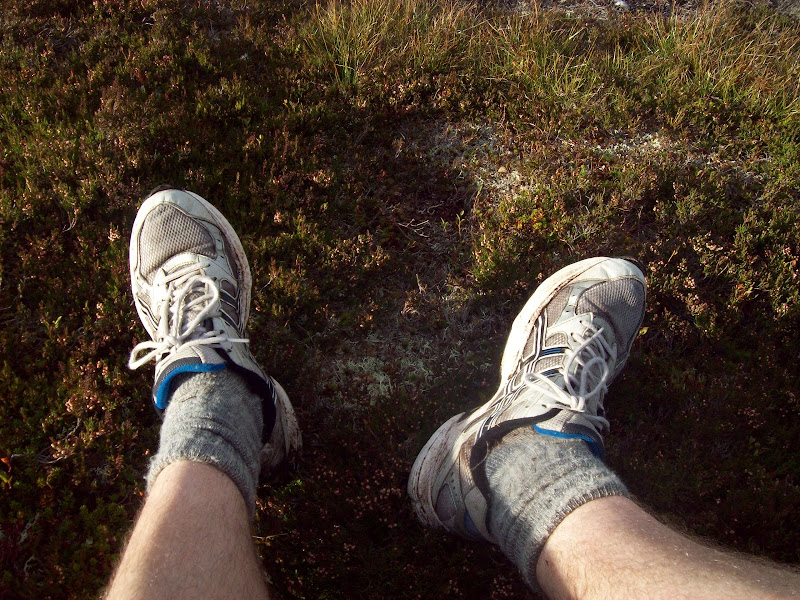 Rinnes and the Hills of Cromdale: 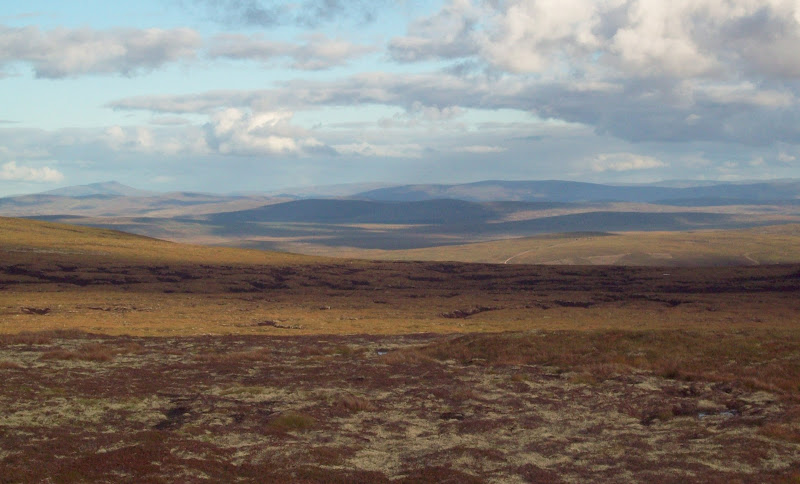 Zooming into the Cairngorms: 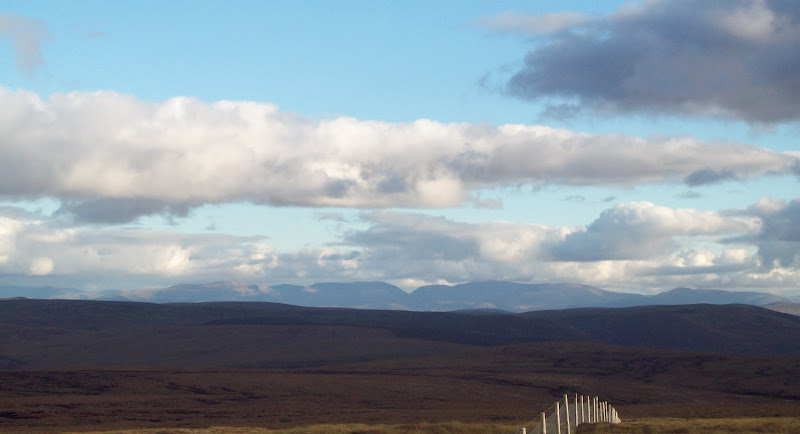 There's a satisfyingly remote feeling to the top, as no tracks approach it from any direction, however that is soon replaced with the dread of having to hag-hop for another 40 minutes or so to get out again. Admittedly there are easier approaches from Drynachan, but this is another 15 miles of driving away for me.

I stuck to the highest part of the plateau on the way back, not that it made much difference. There were some markers to help out with the route. I had missed these on my first visit (good visibility but deep snow) and ended up drifting too far east.

Shortest route across the plateau is marked by white posts: 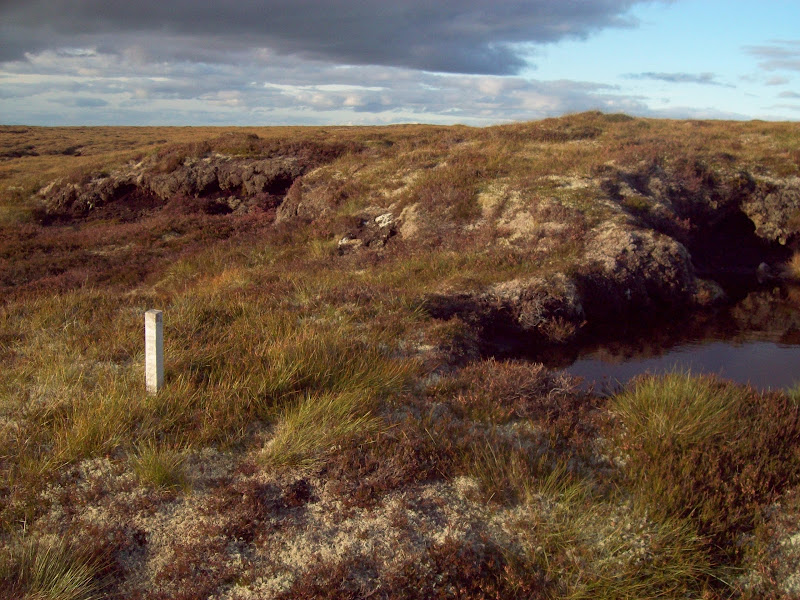 …helps to find the way through the hags: 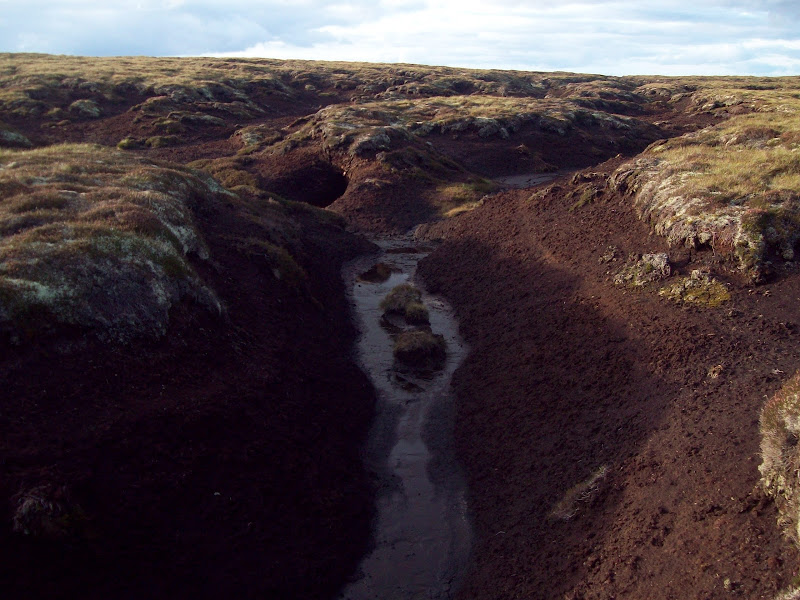 Some of the hags are deep enough to shelter small trees: 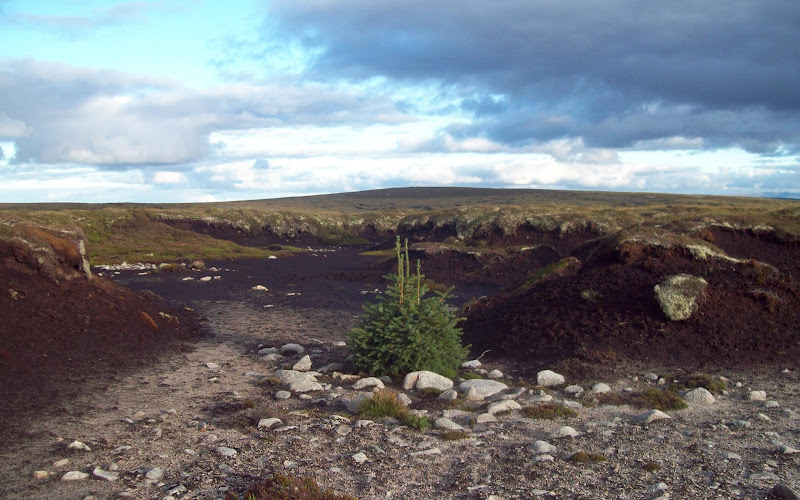 Then it was off the plateau and back up onto Beinn Buidhe Mhor for a quick descent to the car.

West from below Beinn Buidhe Mhor: 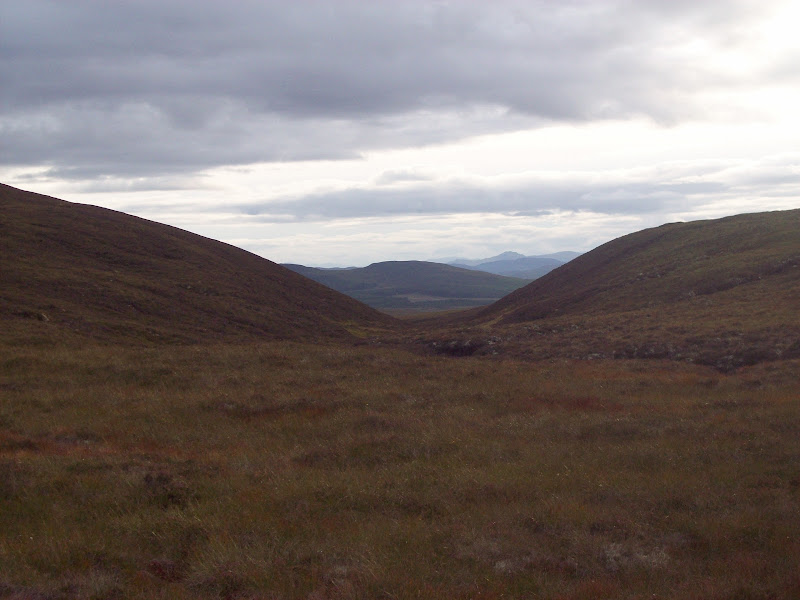 Thanks for posting! SAVE FOR A DAY AFTER AN EXTENDED PERIOD OF DRY WEATHER OR HARD FROST

Malky, you are the Tri-Triple Peat Hag King!

Kevin says he doesn't want to do this Graham, maybe I will convince him one day... Especially after seeing your photos. Doesn't look that bad after all. Or did you only post the drier-looking pics

Kevin says he doesn't want to do this Graham, maybe I will convince him one day... Especially after seeing your photos. Doesn't look that bad after all. Or did you only post the drier-looking pics

I'm with Kevin there

Will pick my day very carefully!

. I suggest you have a look at the Drynachan/Daless approach (there is one photoless report here, but quite a few detailed write-ups on a similar website

), as this probably has the minimum amount of hag-hopping. Slightly more scenic too, as the Findhorn goes through a nice narrow section of valley there (never gone up from there, but I've followed the Findhorn on my mountain bike past Daless).

General consensus from other reports is that the hags dry out quite quickly - it's more the tedious up and down that's a problem, as the hags are endless.

Peat hags can be great when they're very dry and you can just wander through them........but wet and boggy