Setting off from Fochabers on Saturday at silly o'clock in the morning, I arrived Loch Cluanie just as the group of 6 happy campers

from Walkhighlands were finishing breakfast and after dropping a couple of vehicles at the finish line and returning to Cluanie we set off at 7am on what was to be a fine ridge walk. 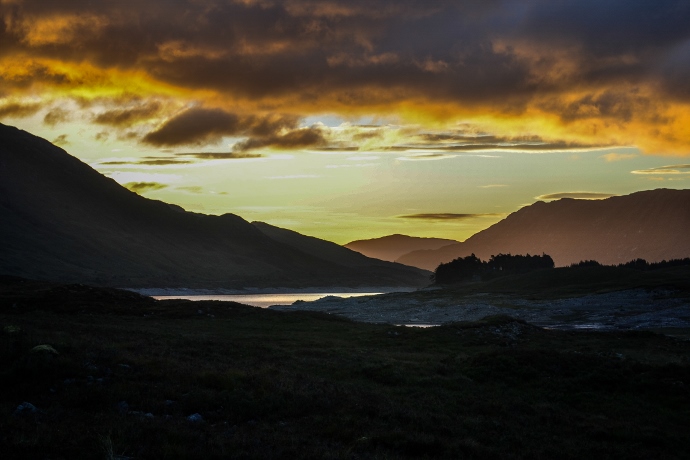 Our group of 7 were, Gary,Gavin, Moray, Dorata, Jim, myself and Dave (the official photographer) 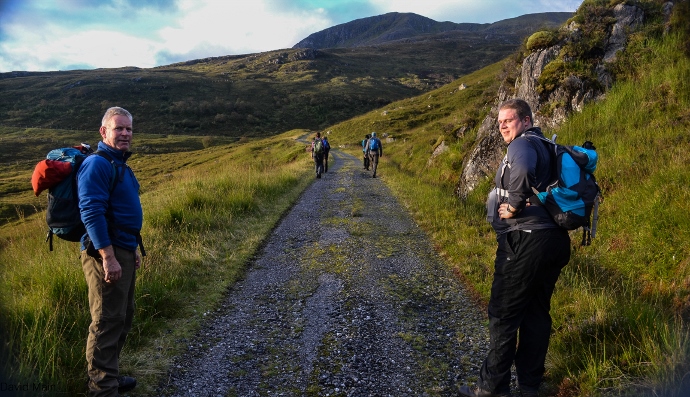 Heading off along the excellent track

We took the private road heading SE for a couple of miles with beautiful views of the breaking dawn and on the waters edge a herd of deer silhouetted against the flat calm of the loch.
Leaving the road we made our way up onto the ridge by the zig-zag stalkers path as height was gained the views across Lochaber opened up It was to be a day of mixed weather, with some heavy showers, some clag on a couple of summits but best of all a measure of sunshine along with the visibility to allow for jaw dropping vistas. After about 2 hours we reached our first summit of the day Creag A'Mhaim, where we were joined briefly by Thelma and Louise, two spritely mountain goats who after a quick touch of the cairn and a muesli bar were OFF !! Only to be seen again in the far distance as a couple of dots on the horizon. Of course I might have been able to see them more clearly if I had 'laser' vision - in fact if Jim were to be believed, I would have been able to see what they had in their sandwiches from two miles off 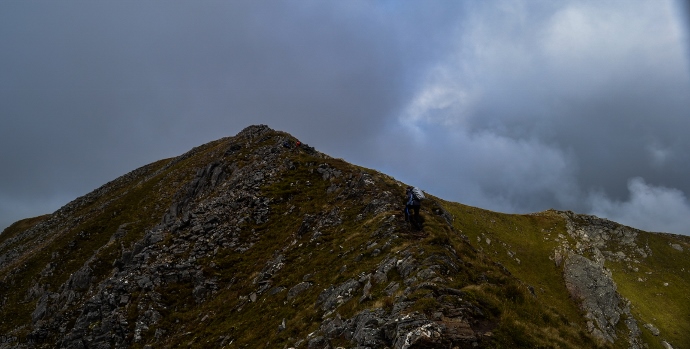 The approach to summit no. 2 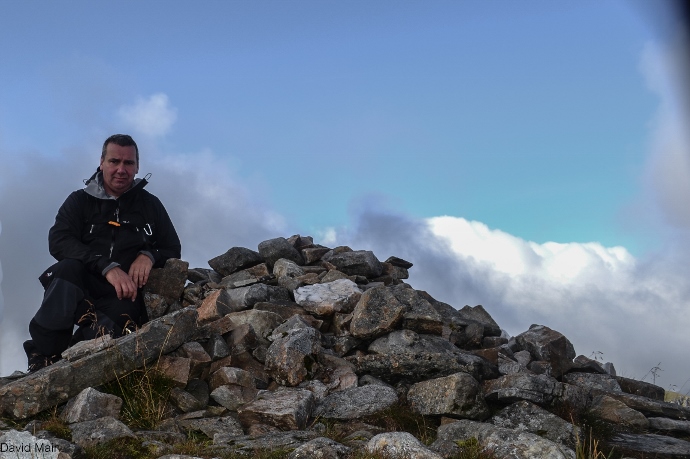 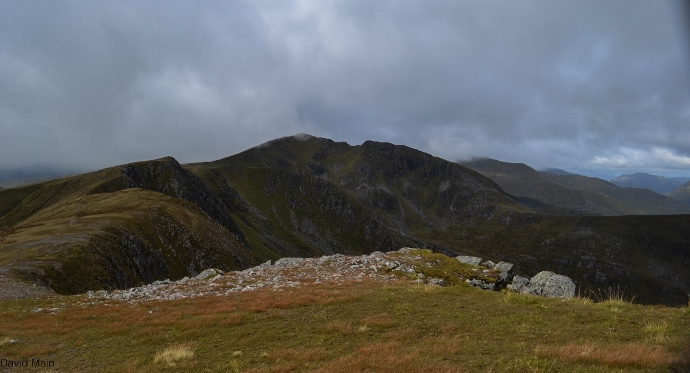 Along the ridge to Aonach air Chrith 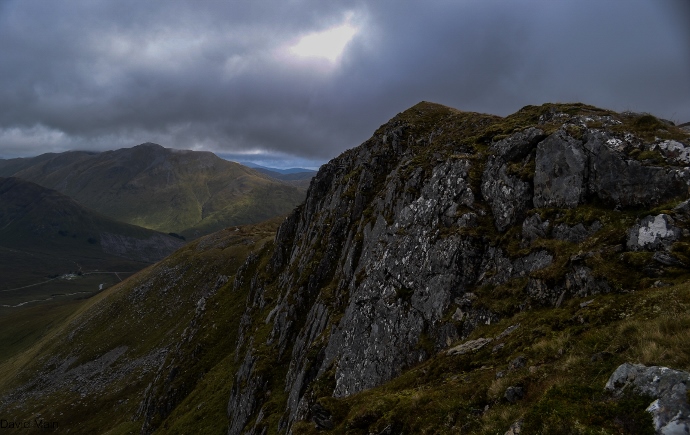 Looking back towards Cluanie Inn 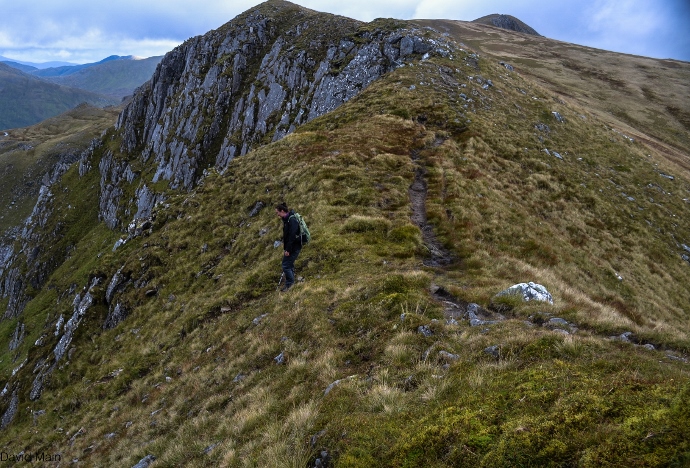 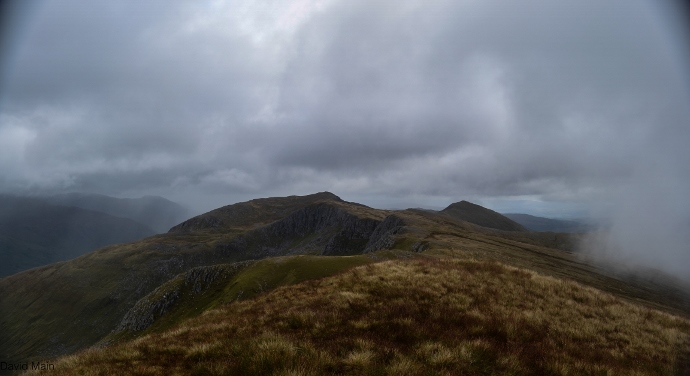 The approach to Aonach air Chrith

Aonach air Chrith at 1021m is the highest on the ridge and a big one for me as I clocked up 50 munros. When I climbed my first Munro last year I had a target in my head of doing 20 - so I guess I must have caught the Bug along the way 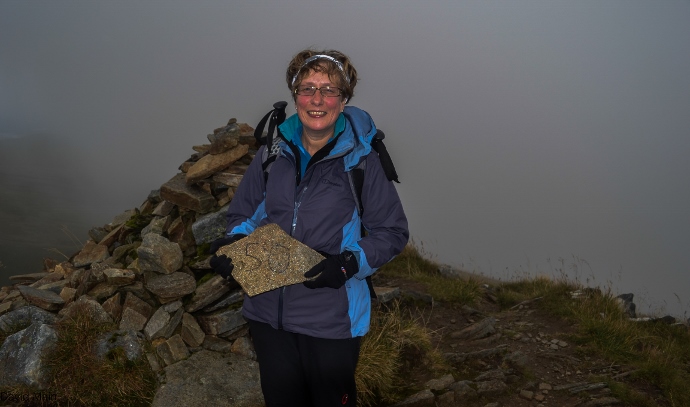 Coming down from this summit there is a narrow rocky section which I found a little tricky but fortunately the clag had moved in so I couldn't see over the edge clearly - whew ! 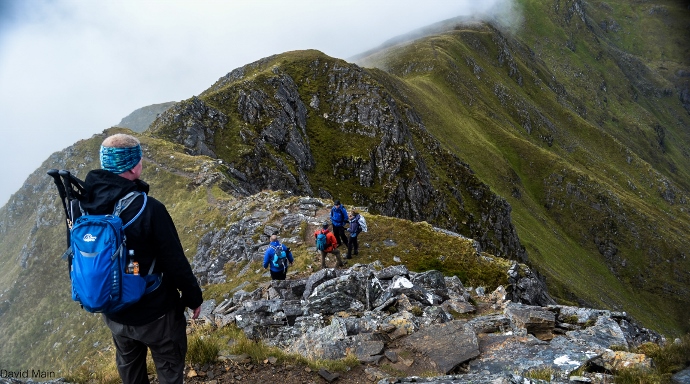 Gary checking out the scrambly bits

When the clag again lifted the views south were lovely looking down to Glen Quoich and the loch beyond. The path again widened out and became more grassy and we were soon on No 4 summit, Maol Chinn-dearg 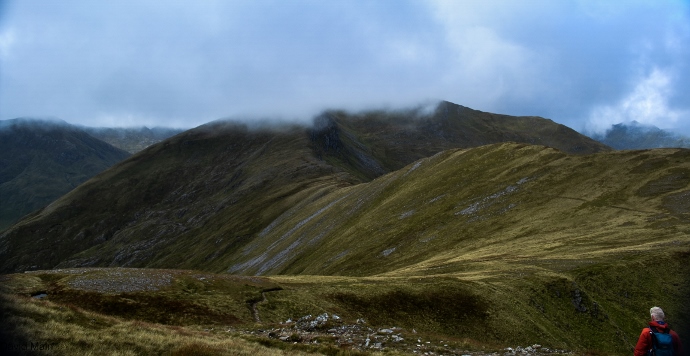 At this point no 5 Sgurr an Doire Leathain was in the cloud and unfortunately remained that way so we had little views from this summit however not much further along the ridge the sky cleared once more and the northern side of the Glen was once more in view, 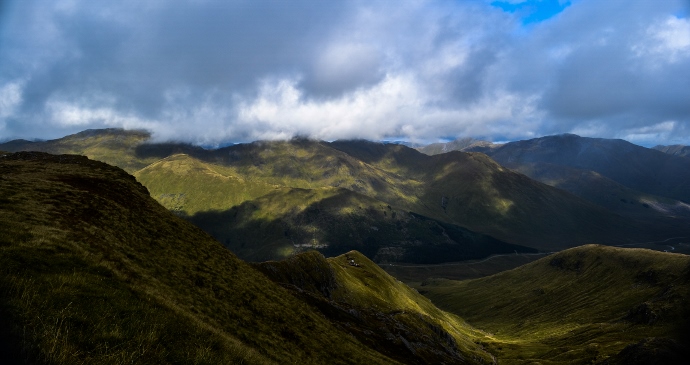 Brothers and Sisters to the North Along Glen Shiel to Loch Duich Soaking up the views on summit no 6

The final climb up to No 7 Creag nan Damh was easier than I had expected and it was such a great relief to reached our final summit of the day. No. 7 the final summit

Six happy hillwalkers, all smiles now, though that would soon change as the long, long, long descent began

Well that was a first - arriving back at the cars on the road side Dave provided me with a plastic bag to protect the car seat ... what a gent

It was a tough but brilliant day, my thanks to Gary (backpacker) for organising, to Moray and Jim for seeing me safely over the 'spikey' bits and to Dave for not photographing the look of sheer terror that must have been on my face at various times throughout the day.
Cheers guys

So glad you got some decent views. All I remember about this ridge was the cloud and rain.

The following day we went to skye and climbed Blaven, we then returned to the mainland and completed the North ridge in glorious sunshine.

Congratulations on the 50 milestone.

hutchy1 wrote: there must be something about this ridge because I met 2 others hitting 50 and 1 reaching his 100 glad you had a good day

Thanks Hutchy1 - I expect so many reach milestones on this ridge just because of the number of munros along it - of our party of seven , Gray chalked up his 40th, Moray his 20th and Jim his 60th

Great report Eve, definitely one to go back for at a later date.

I'm glad Dave pushed on at the end, there's no pics of me falling in the river right at the end

Hi again Eve! great report and wonderful photographs especially like the first one

Good effort all concerned and congratulations on reaching the half ton

Well done on ramping up your total so far in such a short time!

Thanks all - glad you enjoyed the report. I can't take credit for the photos though as these were all kindly supplied by David-Main.
Lightfoot - it was a glorious sunrise, a portent of the day to come

some lovely photos there.

Next challenge Brothers & Sisters across the road?

Great report Evie, sums up the day we had and great to meet many new friends. Thanks for compiling the report your an angel.
Yes Jim we could all do the brothers and sisters

Jim, Dave definitely, I'm thinking a long weekend for those

Hi Garry what are we all doing 12th&13th of October? My first available weekend after I come home?

brothers and sisters eh ? I will need to check out the contours and get back to you on that one!