The Forest of Birse - reflection in verse (apologies)

The Forest of Birse - reflection in verse (apologies)

our_route.gpx Open full screen  NB: Walkhighlands is not responsible for the accuracy of gpx files in users posts
If you're used to walkhighlands, you'll know how it goes -
a lot are obsessed with the height of munros

But Scotland has many rewards for the feet,
and not all are higher than 3,000 of those

We left that grey city with broad golden sands,
and took the A93 through familiar lands

The Waters of Feugh rise just west of Finzean,
in the Forest of Birse, which not many have seen

Parking up at the end of the narrowing track
we laced up those boots, grabbed maps and a snack

It was great to be out in the sun and the breeze
with nothing for company but fields, water, trees

Rabbits and sheep scampered past, here and there
whilst lapwings wailed loudly from both land and air The track disappeared, making us wonder just whether
we'd be struggling all day through this deep boggy heather!

The ascent began here: a sharp, stony climb
the views back behind us increasingly fine 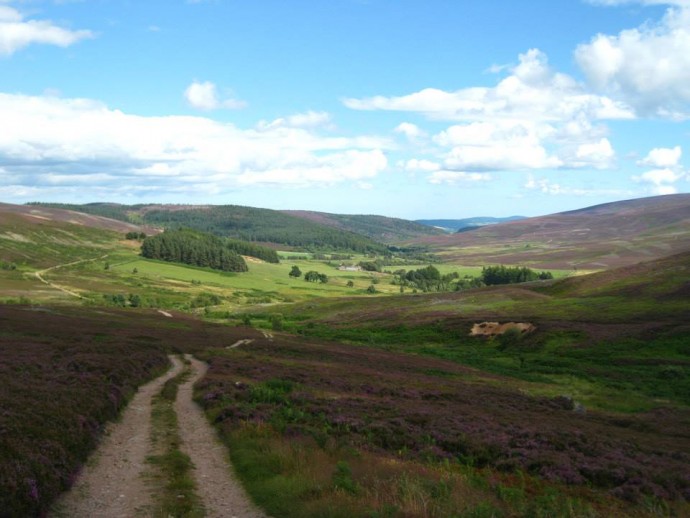 Departing from Burn of Auldmad's rocky cleft
the gradient soon eased; the track turned to the left

Looking back over Deeside and Birse to the east,
no more hustle and bustle; from the city, released, Dark clouds were now building; over Deeside, it rained
but the summit of Gannoch was easily gained

South east to Mount Battock, north east to the Dee
beyond them, behind in the distance - the sea!

A fact about Gannoch: by most walkers it's missed
its prominence too small to appear on a list

But count 800 years or so back from today
and it was ascended by travellers many; on their way

to Glen Esk, and to bustling markets afar
on the old Firmounth Road - by foot (before cars!)

The old byway is littered with snapshots of history
like old St Colm's Well, gushing forth on the hillside reliably

And old granite markers, on some which are known
to be letters, just visible, etched on the stone If anyone knows what these letters might mean,
please let us know, right here on this screen...

But travelling forth, we passed from old onto new
where a scar of a track muscled in on the view No doubt snaking up from Glen Esk, which is cursed
with tracks left, right and centre - for this, it's the worst

Next to the unusually named summit of Tampie
More lovely views, but the track spoilt them badly With relief we turned off, cross country, and soon
to the Fungle Road leading us northward, gravel strewn

Plenty of interest, again the odd stone -
The Fungle has plenty of history of its own. Beautiful views, ahead framed with a "V" -
but take care as this section is hard on the knee This way and that way, the path zig-zags down
hugging the contours cloaked in purple and brown

Make no mistake, it was good fun to hike
but the singletrack here lends itself to a bike!

On the glen floor the path faded and was boggy in places
but the end was in sight, so this would not phase us

Over the bridge which bypasses a ford,
back past the grounds of Birse Castle (restored)

And finally back to our welcoming car,
patiently waiting on asphalt (...tar)

to escape from confusion and chaos in life
to flee from those kids / those commitments / the wife?!

to leave behind lists of Munros, Grahams, Corbetts;
Marilyns, sub-2000s; Nutalls and Hewitts

And value the hills for what most of them are -
something we love to explore - because they're there.

Thank you - sorry for some of the terribly corny rhyming...

Reply to an earlier posting Chris W.
Regarding the inscription on the Cairn not far from the Castle of Birse. You wondered who these people were. Joseph Robert Heaven was my Great grand father and Robert was his son who I'm afraid shot himself as he had an incurable illness. I have a photos of them both. The lady in question my G grandmother Marquise de Braseras (Spanish title). They owned Birse estate for sometime after returning from Mexico after a couple of generations and were responsible for rebuilding Birse Castle. Although I've always known about Birse from my father who visited regularly as a young boy, I thought both castle & cairn were ruins but thanks to the internet and your lovely walkers I have photos of both. My G grandmother lived to a great age and ended her days in Wales.

Grandpa and his brothers were quite a wild bunch and he had a lump on his back from his horse falling on top of him whilst chasing his brothers up the staircase in the Castle with six shooters involved! They got on very well with the Scots !

There's many great tales about them but I hope Chris W and your members enjoys this little bit of info. I'm also determined to see both places myself before I get much older but preferably on horseback!

Wow this is amazing. My father was a gamekeeper on Birse Estate during the 70's when Viscount Lord Cowdray owned it. I grew up there. My mother worked in the Castle as housekeeper and I would play tennis on the courts and explore all the nooks and crannies of the castle. It was a beautiful place to grow up in. My dad would take me out the hill with him and I remember him telling me that hill was "heaven". I used to laugh and tell me mum "I'm going to heaven today mum". How wonderful to hear the story from descendants. Thank you for posting, I found this site purely by chance.

Just back from Hill of Cat today, went up this way via Gannoch and Tampie. It's a bit of a plod, but well worth it!

Right on our doorstep too... cherry popped in this area, will definitely be exploring more of these hills!

I've passed the sign to the forest of Birse so many times but never been along to it! I think I'll be visiting at some point now

Hope you don't mind me saying it reminds me of the Rupert Annuals where they had pictures and two lines of verse (you need a pic to each couplet) which everybody read, and as an alternative, the long story written out in prose, which nobody read.

Sure poetry is a way to hook in the readers..

Looks a nice walk too.