Share your personal walking route experiences in Scotland, and comment on other peoples' reports.
Warning Please note that hillwalking when there is snow lying requires an ice-axe, crampons and the knowledge, experience and skill to use them correctly. Summer routes may not be viable or appropriate in winter. See winter information on our skills and safety pages for more information.
Post a reply
60 posts • Page 1 of 4 • 1, 2, 3, 4

27 people think this report is great. Register or Login free to be able to rate and comment on reports (as well as access 1:25000 mapping).


Well, it had been a long time coming, my last Munro. I did my first one, Buachaille Etive Mor, in 1974 with my late husband. I hadn’t spent much time in the hills until our honeymoon in Snowdonia in 1972 when to my shame I ascended various hills, including Snowdon, in a pair of Woolworth’s plimsolls and Marks and Spencer’s anorak. But I caught the bug and after that we spent all our holidays and weekends climbing and walking, particularly in Snowdonia and the Lakes. We only came to Scotland twice: once we spent a week on Arran and then we had a couple of weeks in Glencoe and the Gorms. The arrival of children in the late 70s and early 80s saw us having more “civilised” holidays at the seaside until, for his eighth birthday, our eldest decided he wanted to go camping. So we borrowed a tent and headed for Langdale where we had a splendid muddy time. On the way back through Elterwater we dropped in to the new timeshare development and bought a week. We had a couple of visits there, carrying our youngest up such hills as Haystacks and Helm Crag, before my husband died in 1989. I continued to take the children to the Lakes but it wasn’t until they were old enough to be left to their own devices that I was able to really take up climbing and hill walking again. When I came up to live in Scotland about 8 years ago I had still only ticked off a handful of Munros but since then I have been steadily working through them. And here we are – the last one. With my daughter, Katie, who, thankfully I did not put off mountains by dragging her up hills during her youth.
Sitting on the summit of Carn Mor Dearg having a celebratory cup of tea we reminisced about some of the hills we had done together. Her first Munro, Ben Na Lap, which we did in a ferocious wind, our expedition to the Fisherfield Six (I don’t care, there will always be 6 in my book!), long walks up Glen Tilt, river crossings, blizzards, sun burn, horrendous midges in Glen Affric, cheese sandwiches (we always eat cheese sandwiches!) and wild camping, not forgetting (how could you?) Torridon, Kintail and Skye. I have had a brilliant time.
I’m not going to bore everyone with a route description except to say that if you use the bridge to cross the Allt a’Mhuillin just below the dam you won’t stub your toe very painfully on a rock crossing higher up. But here a few photos to mark the occasion. 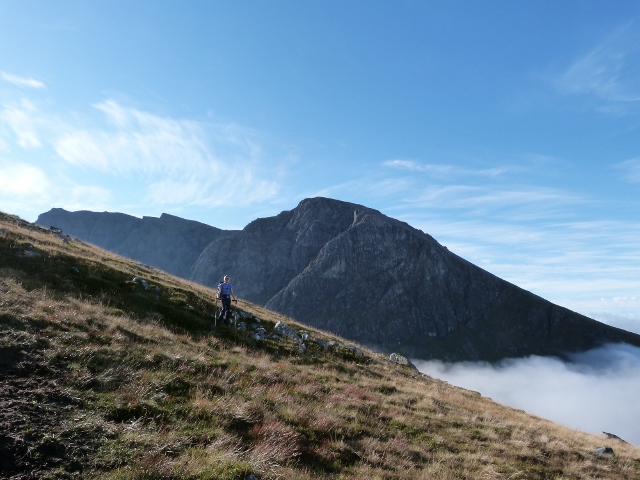 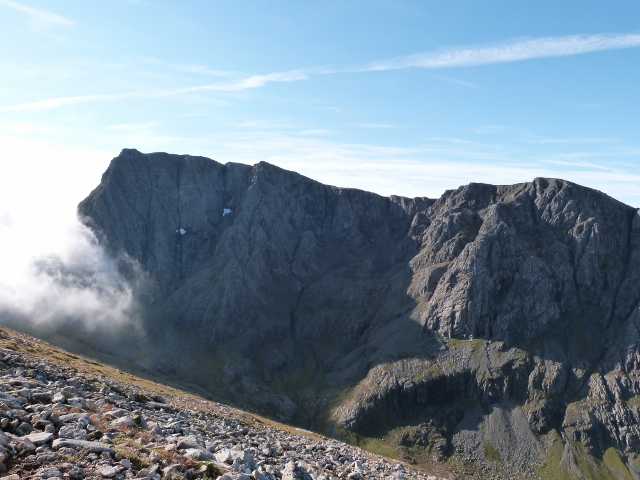 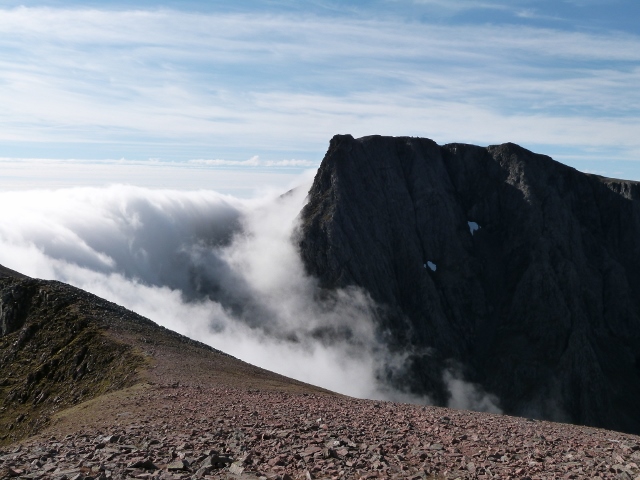 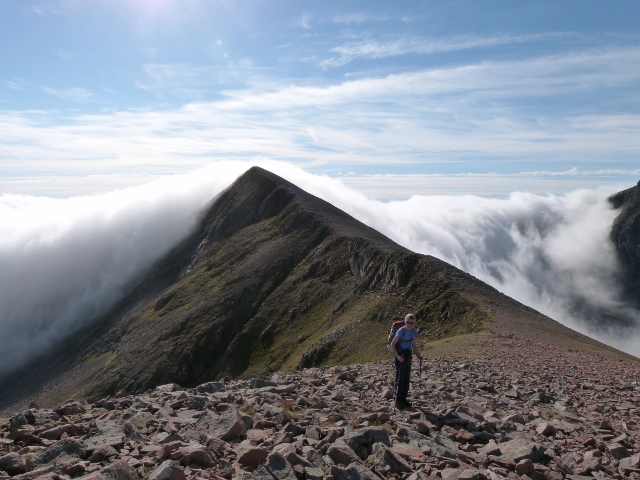 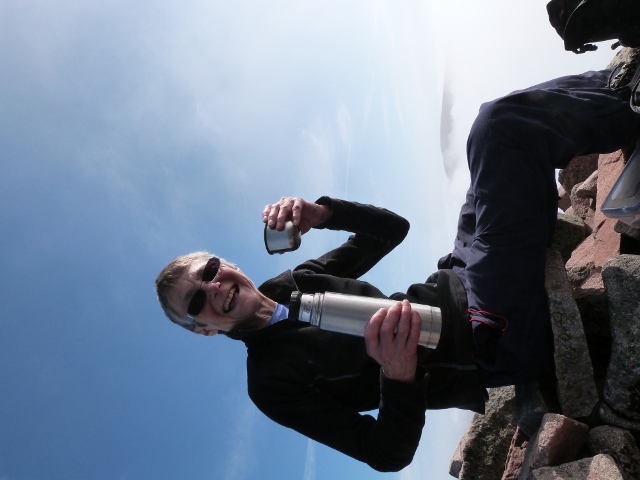 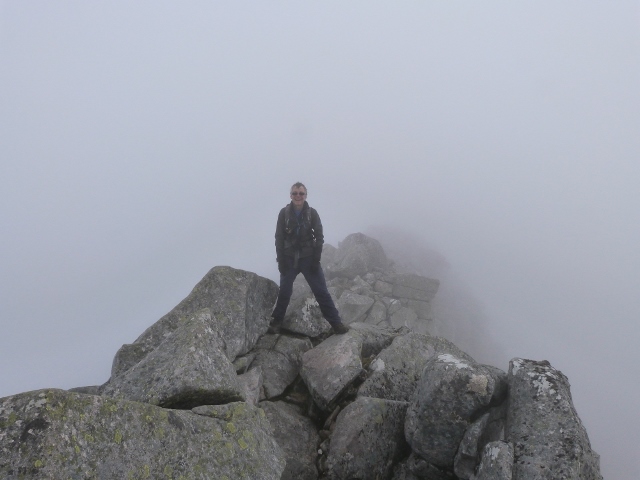 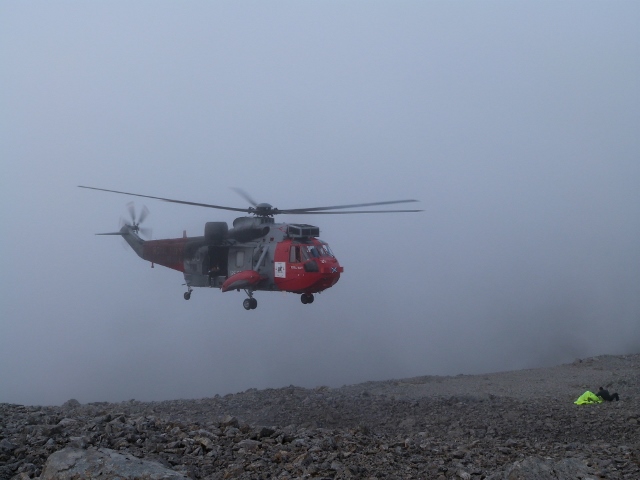 I didn't drink my tea lying down. The photo is the right way up on my computer but seems to come out on its side in this walk report.

Congratulations, arete looking good with the cloud pouring over.

Well done on your compleation.

Well done on your compleation

Very well done, b and p. Your husband would have been so proud of you.

bootsandpaddles wrote:I didn't drink my tea lying down. The photo is the right way up on my computer but seems to come out on its side in this walk report.

I was going to say are you sure it was just tea in the flask.

Well done on your completion. Did you do them all save Buachaille Etive Mor in the past 8 years?

Great stuff bootsandpaddles, and well done! Many congratulations on your Compleation

Now just go out and enjoy yourself with days on any hill, no pressure!

Some achievement and impressive tale.

Top
27 people think this report is great. Register or Login free to be able to rate and comment on reports (as well as access 1:25000 mapping).