Ben Tirran in the mist and murk.

Ben Tirran in the mist and murk.

our_route.gpx Open full screen  NB: Walkhighlands is not responsible for the accuracy of gpx files in users posts
We walked from the Clova hotel. There was initially a little promise of the cloud lifting, but it started to get lower as we climbed the path towards Loch Brandy, lower and lower until it completely hid the loch from view when we got to it. From there until descending from Loch Wharral was all in the clag. As good as Clova got today

Part of me was quite happy about this as it meant that I had to practice my navigation and pacing in featureless hills in 20/30m visibility. As I'm planning on doing my SML assessment in October that was very handy. It also made us look at all the creepy crawly things that appeared on the walk and some of them were truly wonderful. 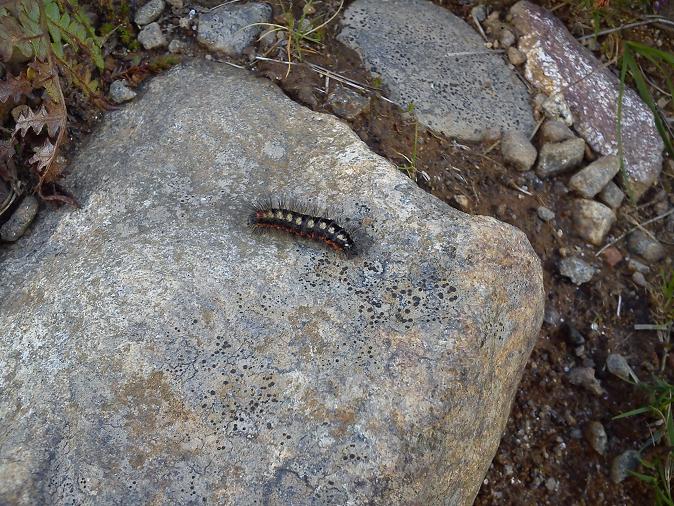 Caterpillar #2 - a speedy one this, hence the blur. Spider on a stick This fence runs from the lochan in the dip to the north-west of The Goet to within a short distance of the summit. A handy handrail in the mist, but quite an obstruction to coming and going across the tops. There is a gate, however, both at the lochan and near the summit. Coming our route, there is no need to cross it anyway.

Part of me was less happy. Being in cloud is rarely warm and today it was a bit chilly. My walking partner has poor circulation and got hot on the way up in the sun, but when we hit the clag got a bit worryingly cold and white as we progressed through the walk. We put up the shelter when we reached The Goet in an attempt to warm her up a bit, but as this was not proving hugely successful I settled on the 'get down to warmer climes as quickly and safely as possible' technique of warming her up. We managed to miss the path on the west shoulder of Ben Tirran on the way down and ended up going along the very tussocky and heathery side of Loch Wharral, still nearly invisible in the clag even when standing next to it.

They're building some structure at the south end of Loch Wharral but I don't really know what or why, but it means that the path on the map is now a decent sized vehicle track offering an easy route off the hill. We cut off this onto the path to the west of the Adielinn Plantation to cut the corner off the way back to the Clova Hotel.

On walks generally, I entertain myself by counting the number of slugs and frogs I see, in the usually vain hope of seeing more frogs than slugs. As we were descending this path, it looked like it was going to be the same old story of slugs triumphing over their foes, as they were leading 14 to 3 (including one dead frog as I was desperate). By the time we made it up the road to the Clova Hotel, the frogs had turned it around to win 32-14. There were loads of tiny frogs on the road, just a few cms long (and also many squished bigger ones (which I ceased to count)). Am I sad "I really am warm and looking forward to the 3km walk along the road..."

By the time we reached the Hotel again, it had stopped serving food (after 8pm) which was quite disappointing at the time. However, we were well and truly compensated for this lateness by the quality of the fish and chips in Kirriemuir.

Hi there wjshaw2, a graet pity about the clag, under fine weather it's a cracking wee walk, my local one infact, just up the road from Carnoustie. I must re visit soon as this appears to be a new track since I last climbed it in 2012, as you say pity about the hotel being closed as you get a fine bowl of homemade soup and fresh bread/butter, which would warm anybody up. Glad you found a good chipper though

Nice walk this - I did it a couple of month's ago but was luckier with the weather as it was a cracking day.

The fence on Ben Tirran reminded me of the one on The Great Escape so I kept wondering if Steve McQueen could clear it on his motorbike.

I travel from Forfar - Perth for work Mon - Thur and over the last few weeks I've started to count the juggernauts coming in the opposite direction (statistically, Tuesday's are the busiest days you know!!). Now, I know this is sad, and I am trying to wean myself of this habit but, frogs v slugs..............come on

The slugs have won every subsequent walk by a distance... At least I'm getting some exercise while counting small beasties.

Try a walk to Deuchary Hill in late May, at Mill Dam the frogs will win by a couple of thousand as the hardest part of the walk is trying to avoid standing on all the tiny young frogs.