Another addition to my mountain porn collection - the Corbetts - was given to me by my other half. A new book to read in bed and fantasise about. Fabulous. I had trawled through it in some depth, murmuring my approval while my other half told me to get out and satiate the hill-beast. I had decided on Ben Donich, only an hours drive from Glasgow and at 0645, I was on my way with the forecast of high pressure but with plenty of snow still on the hills. As I drove up Glen Croe, I had forgotten how beautiful it was. My last trip up here had been an 8-hour 'epic' trying to get a friend off Beinn Bhuidhe who had taken unwell on the way down - I thereby christened it Beinn Spewie. As I parked in the Rest and be Thankful car park, I made a stupid error and got the car stuck. Luckily for me, a truck driver had stopped to take a photograph of the fantastic vista on offer and he managed to get the car out, while I pushed - I actually thought he was going to drive the bloody car off but he was helpfully taking it back to the roadside - the cynic that I am. Appropriately I was thankful in that car park and the actual Corbett could begin. I walked along the B828 until I came across the Forestry Commission track. Even at this height, the views were stunning from the Cobbler to Ben Donich itself and Beinn Luibhean across the A83. This was going to one of those memorable days. I had recently bought 2 walking poles and I have to say, even in this short excursion I was converted. The rhythm was good and there is something quite special about walking through virgin snow with no other footprints (save the wildlife). It wasn't long before I reached the stile and the ascent began in earnest. I made good progress but I decided to sit down and relax during this walk rather than melt the snow with my after-burners. It lives longer in the memory. As I ascended, the scenes before me were breath-taking and I snapped happily on my camera - thankfully with a fully charged battery this time. I know Doogz had previously said in a post that all he could hear was the traffic on the road - I was lucky as they had closed the B828 to traffic and so the only music I heard was the crunch of snow and the beat of my blood.

I had read in the book that in deep snow, care should be taken with several rock fissures forming quite deep crevasses further on. As I approached the first crag, I was literally stopped in my tracks as the rock became split into quite large chasms full of snow - who knows how deep some of these fissures were but I certainly wasn't going 'direttisima'. I headed around the gaps as best possible but it did involve down-climbing, a little rock-climbing and a wee jump on to slippy rock to get past this - quite cerebral and I have to say an unexpected but pleasant surprise. This took me about 10 minutes to get round. Once past this, there are no difficulties and I began to relax. I had been conscious of keeping well back from the edges in case I was walking on any cornices. Without word of a lie, I was literally 0.5 km from the summit when I heard this almighty boom and rumble and I burst into a run quicker than a steroidal Ben Johnson. Anabolic Pollock? I don't know if I set an avalanche off down the N face but I didn't hing about to fun oot. It was very unnerving and I began to think it had been in my mind. I crossed the flat plateau to the OS trig point and sat and admired the view while getting stuck into my hot minestrone soup - one I had prepared earlier. Arran, the Paps of Jura and even Mull could be seen. Was that Newfoundland?!

The descent was less remarkable but still required care, reversing my route through and over the fissures. Once down and back at the car, I looked back and took in the view once more. I never saw a soul on the hill all day - wonderful. Corbetts? Yer damned tooting. 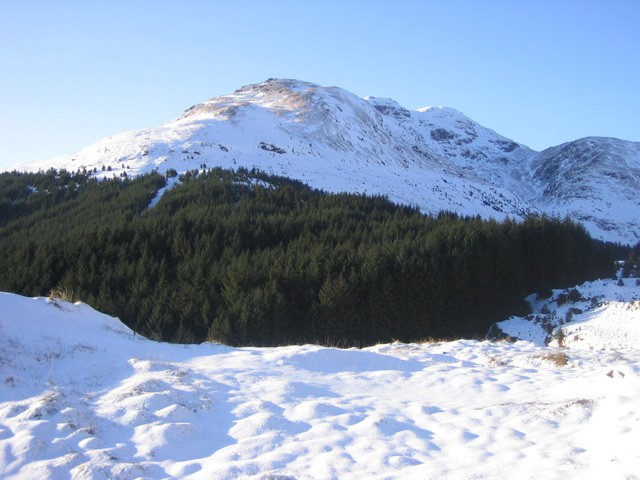 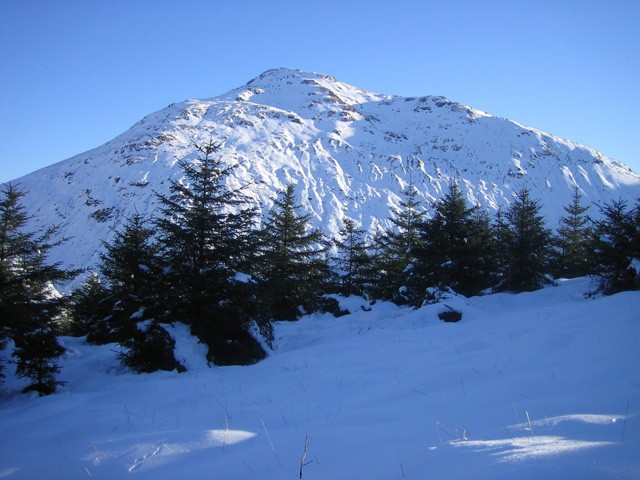 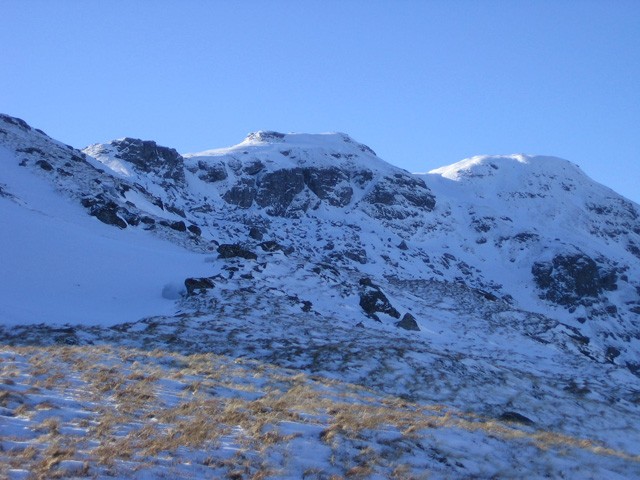 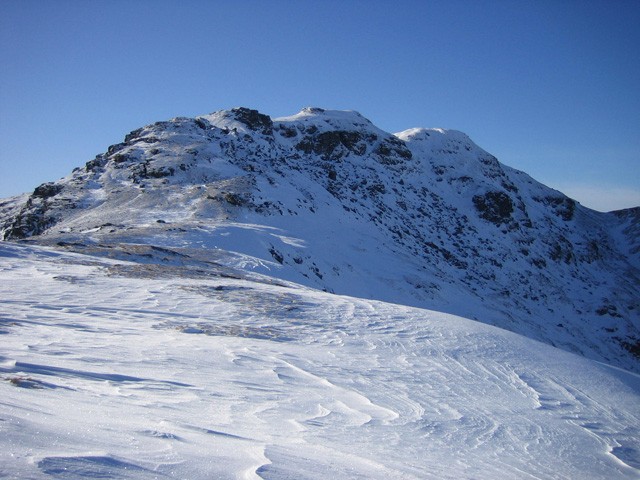 Ben Donich - the problems begin at the nearest crag 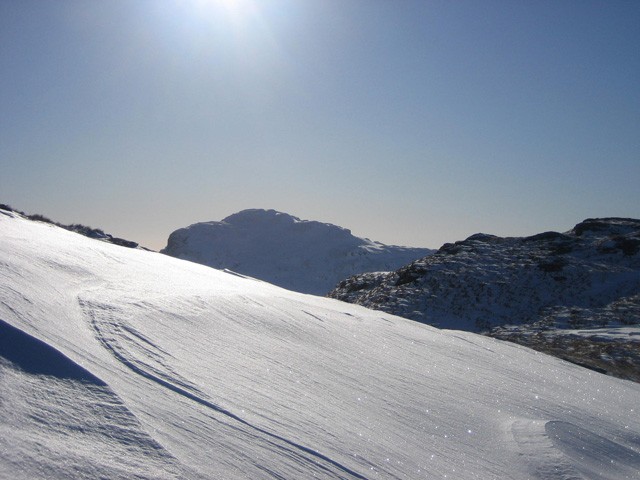 The Brack juts out 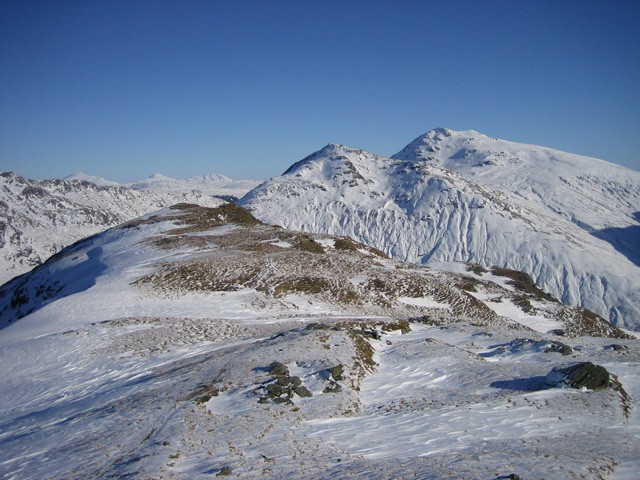 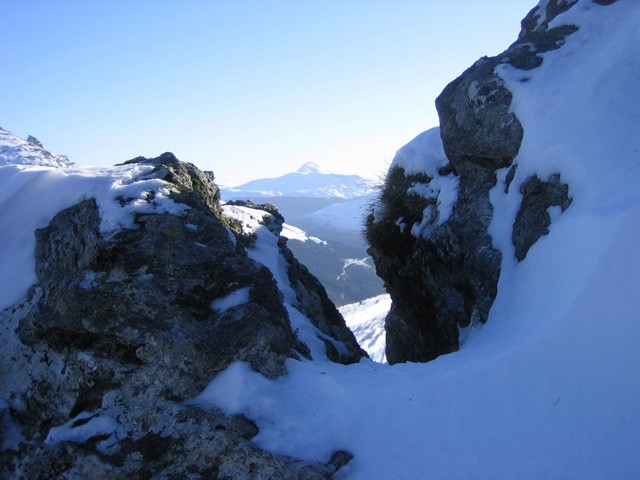 Ben Lomond in artistic shot - I thenk you! 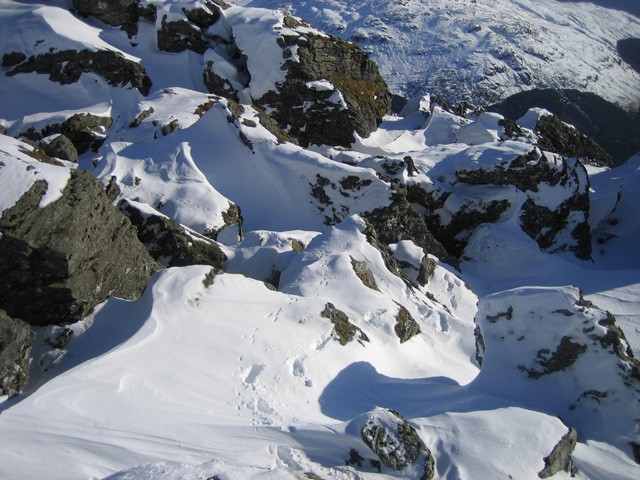 Looking back over the fissures - not actual size 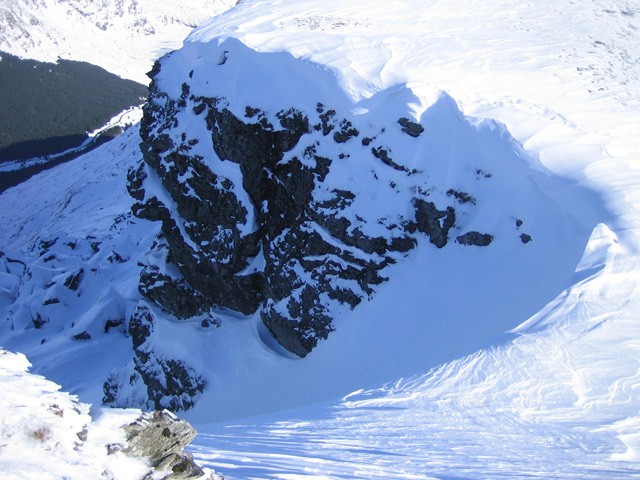 Just past the crag where I near shat maself 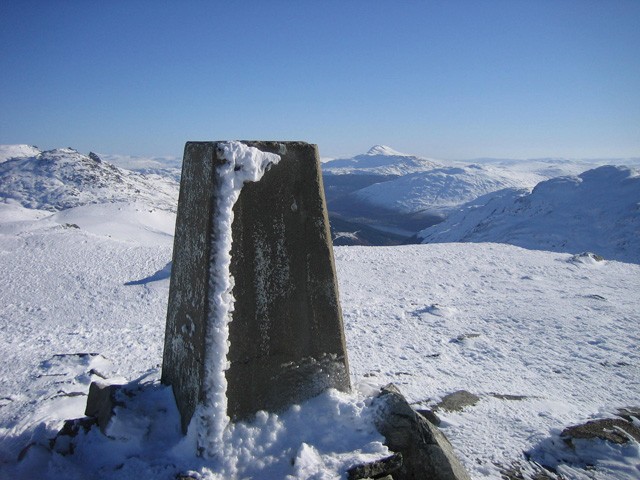 A fantastic vista from the OS trig point 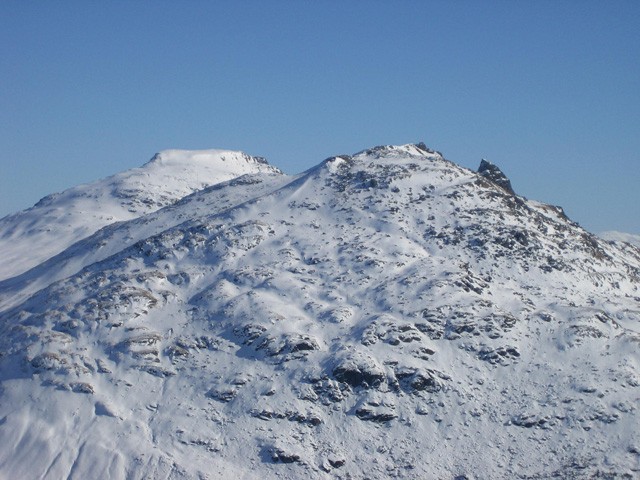 Hi Kev,
As usual a good report with that rare topping of weegie humour hahaha. I take it your doin the wee wans in prep for the big wans in the summer?

Me and Danny went up "The Law" in the Ochills on Sunday and it was a harder walk than many of the Munros I have done. Must be gettin auld.

Brilliant, another convert and if you thought Ben Donich was quiet try the Assynt Corbetts.

Nice report and I can empathise with re that crag as it was really icy when I did it last March, and not having taken crampons, I had to chop out the ice with the axe.

Great photos and I can recommend the Brack which, although a steep slog, is quite a hill.

If you do get the Corbett bug, you'll love days like Rois Bheinn (Moidart) and the traverse of Foinaven, just magic.

Nice one Kev - a double conversion: Corbetts and walking poles! Told you!

I know CurlyWurly raves about The Brack so I might try to do these two together during the Easter hols. Scary avalanche feeling - maybe we're all just getting a little jittery with the number of them gong off recently.

Hmmm - not sure about the poles but I'm a new convert to Corbetts too - courtesy of taking my Corbetts book into the bathroom (I've had it ages).

Know what you mean about crevasses - there's some strange and very nasty ones on the back of The Cobbler too as you try to get round to the South Summit. I can imagine there could be problems in thick snow...

Great photos - don't like the sound of the awkward bit though so think I'll have to wait till summer to do this one!

mountain coward wrote:I'm a new convert to Corbetts too - courtesy of taking my Corbetts book into the bathroom (I've had it ages).

Brilliant - one of the great quotations of literary critique!

MC - not one i'd recommend for you until the snow's gone. It just covered the fissures and some of them were about 15 foot deep - leg-break material. I wouldn't get away with taking either my Munro or Corbett book into the bathroom.

GD - wish I'd started on the poles sooner. I'd be up for the Brack - it looked stupendous and really towers over Glen Croe.
Cuillin - cannot wait to do some of the Corbetts up North - especially near Torridon - infinitely more character than many of the Munros.

kevsbald wrote:MC - not one i'd recommend for you until the snow's gone. It just covered the fissures and some of them were about 15 foot deep - leg-break material. I wouldn't get away with taking either my Munro or Corbett book into the bathroom.

GD - wish I'd started on the poles sooner. I'd be up for the Brack - it looked stupendous and really towers over Glen Croe.
Cuillin - cannot wait to do some of the Corbetts up North - especially near Torridon - infinitely more character than many of the Munros.

And groan to the pole conversion - pretty soon I reckon I'll be the only one on here refusing to use them (unless I decide to use them to give my poor underworked upper body a workout!)

I thought you were going to burst into a rendition of "The hills are alive, with the sound of music"

As for walking poles, I am sure you were mocking me up in the Mamores for using mine

Go on MC, give them a try. Takes the weight of the old legs

I've tried them - found it really hard work/tiring! But my leg muscles are good enough to support all my joints so I don't have any trouble, despite bounding down hills at speed most weeks...

mountain coward wrote: But my leg muscles are good enough to support all my joints so I don't have any trouble,

If your leg muscles, especially around the knee,are good enough, they do they job of poles so, providing you keep your muscles good, you won't need them... I'm 52 already and haven't had any problems yet so don't really envisage any until perhaps when I get really old and everything wears out anyway!

The way I see it, we're designed to walk almost constantly but we're not designed to use poles!

would this be the offending HOLE you were talking about Kev..?
about a gazillion feet deep ....if you went in it ...ttfn see ya after the thaw

was indeed a gr8 day for me as well...the traffic thing was only the first half an hour ..then wow...

Aye - kent it was deep Doogz - just glad I didn't walk across it cos there were bunny footprints there. I could have been tatties.

An interesting day out full off booms, crags, scrambling, the lot...

By the way I'm tooled up for winter now. Doing a tiso day course next week. If you find yoursel passing by Inverness and still up for showing a winter novice the jokes, i mean ropes, then give us a shout