Beinn Sgulaird on my bended knee

Beinn Sgulaird on my bended knee


There's something about climbing a Munro on a day that should be a working day so when I checked the MWIS website on Sunday evening and the forecast for the West Highlands on Monday was perfect for a day in the hills it was the hills that won and on Monday morning early I was heading north towards Oban rather than the short drive across Edinburgh to work.
This walk had a special significance as 10 days earlier I had a cortisone injection in my right knee, the purpose of this walk was to see if the injection had done enough to my knee to give me a chance of climbing Aconcagua in Argentina at the end of the year, more about this later.
The starting point for this walk is just past Druimavuic House which is reached by taking the minor road prior to crossing the Loch Creran bridge which is north of the Connel Bridge on the A828 north of Oban.
It took me almost 3 hours to drive up from Edinburgh although my journey was slightly delayed by coffee and a bacon roll at the Green Well in Tyndrum. It's difficult to pinpoint this location on a map as it sits right in the bottom corner of sheet 384 and the top corner of sheet 377, but it is easy to find.
The view of the approach route was spectacular from alongside Loch Creran on the drive in. By the time I reached the start point it was almost 10.00 and the sun was shining bright; what was once a track alongside Druimavuic House is now a construction road as there are major works and pipelines being laid further up the glen, so follow the construction road through the woods and continue walking for about 10 to 15 minutes until you reach a small cairn alongside the track which is the start point of the climb. The start of the track from alongside Druimavuic House

It's a good steady climb up from here to the first of the smaller summits and the view back down to the Loch gets better and better the further up you climb. Loch Creran from part way up

The track is fairly easy to follow and you can easily make out the route which follows the ridge line up to a large "house" shaped rock on the sky line. After crossing the first summit the path veers around to the left to avoid a rocky outcrop but again its very easy to follow the path which takes you down a short zig zag path and across a fence before heading up towards the summit of Meall Garbh at 848 metres. There are great views from here of the summit of Beinn Sgulaird and of the summits all around. I found a sheltered spot out of the wind just below the summit of Meall Garbh and stopped for coffee and a sandwich, it was great just sat there in the sunshine taking in the view with not another sound to be heard. 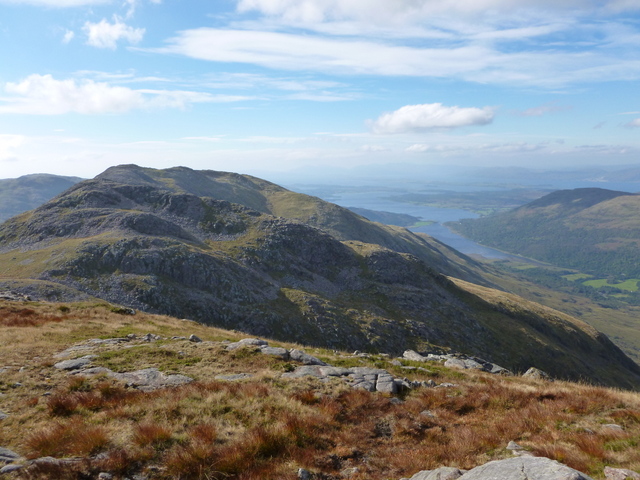 After coffee I pushed on towards the summit of Beinn Sgulaird, the path was easy to follow and it was exactly 13.00 hrs when I reached the large summit cairn. The wind was quite strong on the top so I only stopped long enough to take a few photos before heading back down the way I had came. me on the summit of Beinn Sgulaird

The fleece I had put on towards the summit was soon back in my bag and I could feel the sun burning my face which for the last day of September was amazing. I stopped again on the way down and had a good look around with my binoculars; I'm pretty certain I could see every Munro I have climbed this year and a lot more from my view point. I reached the start point in the lay by at 15.00 and was soon heading back down the road towards home.

So how was my knee; it was great on the way up but not quite so good on the way down. The bad news was the following day my knee was swollen up like a balloon and by the end of the week I could hardly walk

, it felt like I was walking bone on bone. So sadly it's the end of my plans to climb Aconcaguar with Jagged Globe at the end of December (if anyone wants to take my place contact Jagged Globe I'm sure they will be pleased to hear from you) and this was probably the last Munro I'll climb for a little while. I saw my GP on Friday morning and now I'm waiting for an appointment to see the Consultant, I'll hopefully (I don't think that's really the right word) get a knee replacement op before Christmas with the aim of being back in the mountains by next spring, wish me luck.

Re: Beinn Sgulaird on my bended knee