This was the second day of our week in the Lakes. The previous day we had done Great Borne and Starling Dodd from Ennerdale and after a bit of a misty start the clouds had gradually lifted throughout the day. We for hoping for similar fortune today as we drove towards Buttermere from Lorton.

20130923Grasmoor.gpx Open full screen  NB: Walkhighlands is not responsible for the accuracy of gpx files in users posts
We parked at Cinderdale Common and booted up. Although a bit grey it was very mild as we headed up Rannerdale, which has a nice secluded feel. As we hit the main path going up to Whiteless Pike we got our first view of Buttermere, looking very still. Looking back down Rannerdale towards Crummock Water Buttermere with cloud on High Stile

Not much sign of the cloud lifting yet and we were into the murk before we got to the top of the pike. Here we caught up with a chap from Teeside for whom this was his final northwestern fell. We took his photo and had a chat and then he headed back down and we headed on up. Into the cloud on Whiteless Breast Actually I don't mind walking in these conditions once in a while. It was dry and occasionally the sun would add a bit of extra luminosity without actually breaking through. The fact that you can't see far gives you time to observe things on a smaller scale, the plants , the colour of rocks, the sound of streams and so on. Well, we continued on to Wandope and the extremely undistinguished pile of rocks which marks its summit. Just past here we stopped for lunch hoping to get a bit of a view into Addacombe Hole but without joy. Although not far away we decided to miss out Crag Hill this time - we'll do it on a Coledale round someday - and decided to head directly for Grasmoor. We'd only just started the ascent when, very quickly, blue sky started to appear above our heads. The top of Crag Hill was almost clear and it suddenly got very warm indeed. Breaking through the cloud on the slopes of Grasmoor, Crag Hill behind As we neared Grasmoor summit the cloud drifted and on and off in a tantalising way - would we get a view or not? It was one of those Wow! moments - a sea of fluffy white with only the very highest peaks showing. We stared gobsmacked and continued a little way down to the westermost cairn and then back up to the summit. Judith, west of the summit We sat by ourselves on our stony island summit in a sea of cloud looking out towards the Scafell archipelego for twenty minutes or so just soaking up the sun. And, boy, was it hot - not a breath of wind. We had tea and maltloaf but, to be honest, sitting on deckchairs with icecreams under a beach umbrella would have felt more appropriate. 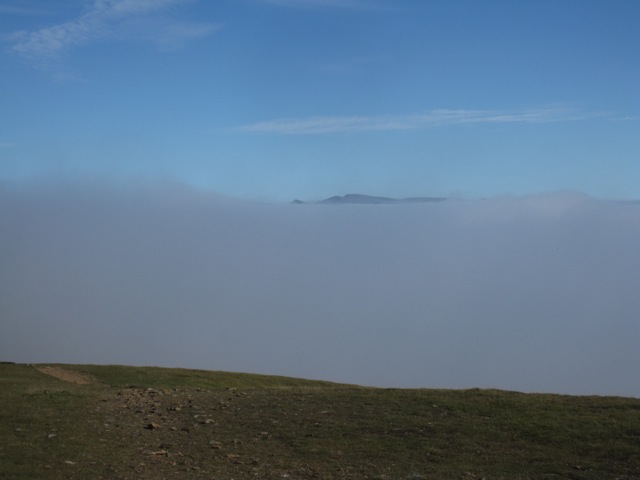 A brief glimpse of Skiddaw

Finally time to go - Skiddaw was briefly visible as we left the summit plateau and then we headed down Lad Hows, grassy at first, then a bit loose and stoney on the steeper bits until eventually Crummock Water became visible. Emerging below the cloud layer

It was very grey under the cloud with not a hint of the delights to be enjoyed above. We've done enough walks in clag in our time so today's fantastic views felt like a well-earned treat - certainly a day to remember.

Looking good there - you picked just the right spot for the Monday (we were stuck in the clag, with just hints of sun trying to break through on Glaramara/Allen Crags). Did Grasmoor on the Friday in the sun.

Its a good walk. As for the views if you can't have clear weather and valley views this is the next best thing. Only once have I walked through the cloud to a similar scene to yours.

Some fantastic sights to see

Thanks Stevesey - some nice pics in your report too. Yes the Friday of that week was a stunner so we were up Scafell Pike that day (which I might do a report on shortly).

colgregg wrote:Only once have I walked through the cloud to a similar scene to yours.

Cheers both. It doesn't happen often so it feels special when it does.