Stob Dearg is a walk that needs no more technical coverage from me, its great! So here is just my wee story of a fab hill day.

Having met only a few of the WH peeps previously, (Ben Challum and AE) I decided to step out of my comfort zone and join the hordes for Scoob and Fionas last Munro, Stob Dearg on 28th September. Tomsie reminded me about it earlier in the week when I was considering what to do at the weekend.

Having courteously introduced myself to Fiona on the TH page, I kitted up for a camping trip to the Red Squirrel, new sleeping bag and camp bed for the occasion. I was out on the Friday night and with a 5 am start, I was a bit dubious about getting camped up before the walk, but, made it to Glencoe before 8, tent up, boots on and rushed off (so much so that I discovered later, I hadnt zipped my tent up,,leaves everywhere lol but at least it was dry)

The layby at the start was already full with cars pulling down into the cottage track instead. Pulling hard and too quickly in here, i was met by someone (Wullie, I think) waving his arms, good job too. Early warning of the fact that the road disappears into great big holes in the road and as my exhaust already lies about 6 inches off the road,,it could have been nasty. Awful conditions but a few laughs every time we heard a bump or a loud scrape,,followed by about 30 sharp intakes of breath lol OOOOOOOFT!

Logistical nightmare trying to get everyone down this and back up / over at the end of the day too.

Met JP at the start, so far the only person I knew,,but everyone was so friendly, introductions made and good chat for a while. The camp was split, some taking on the Curved Ridge, others up the corry. (me the latter, I was in two minds but on the day, just dont know if I had the confidence)

As we all headed up the path and over the bridge, the low cloud that had been hanging around Dearg was lifting and moving off. Forecast was good, and I was looking forward to a Clachaig dinner,,,days like these are hard to beat. 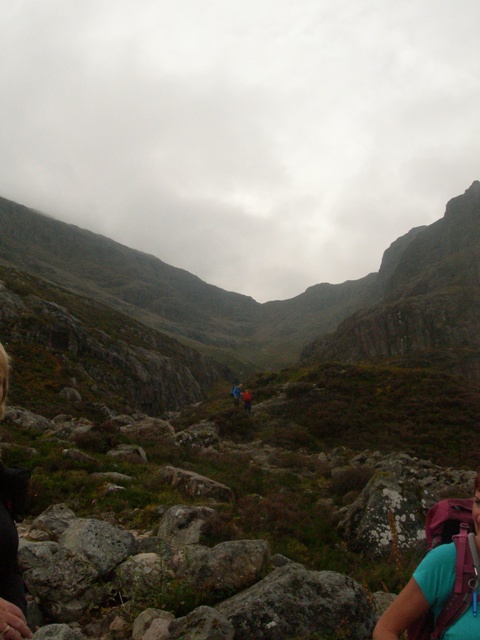 Crossing the burn a little higher up was easier than my last attempt, about 2 years ago, when the water was pretty high and we had to borrow a couple and their poles to get over. Water levels today were pretty low. I'd forgotten just how totally rocky the corry ascent is, with its stone staircases and loose scree. The views back down to the car park and over to the Devils Staircase just improved as we climbed higher and the field of walkers was pretty spread out up Coire na Tulaich. 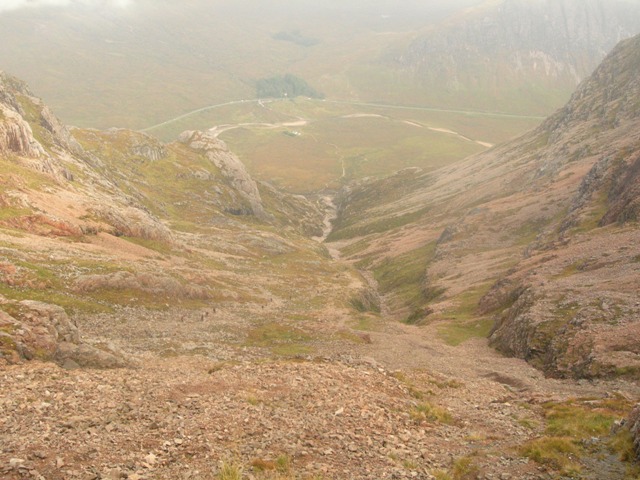 Looking back down to Alt na Feadh

Reaching the Bealach at around 900mtrs, the views South and West opened out. The hill was really busy in all directions and after a wee catch up, regrouped and headed back Eastwards towards the summit. 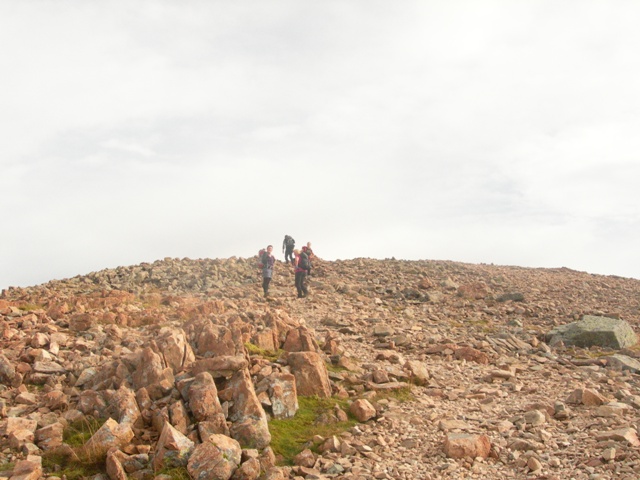 Heading up from the bealach 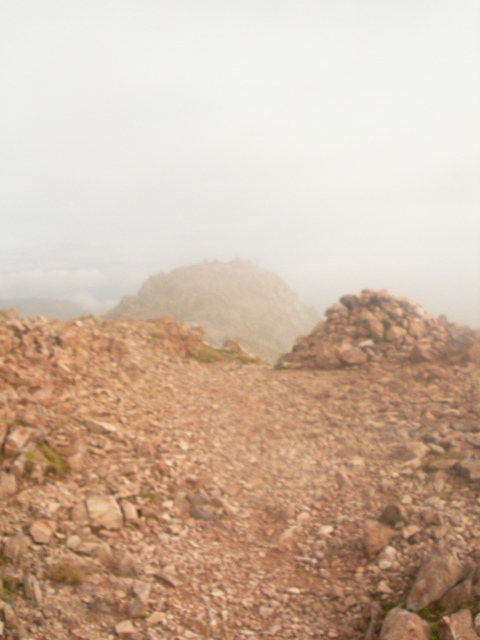 The top, shrouded for a moment in mist, 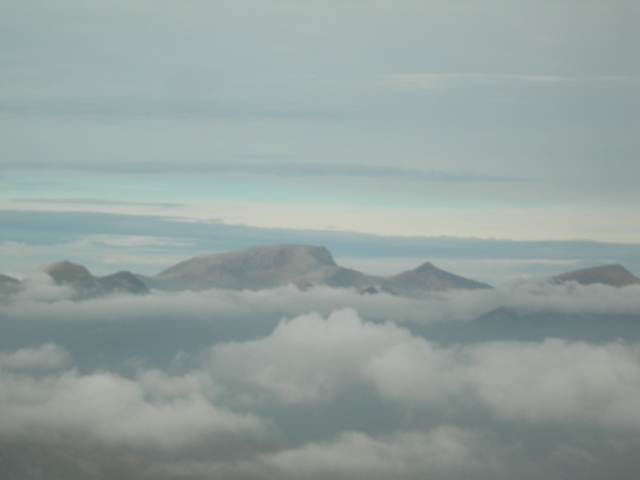 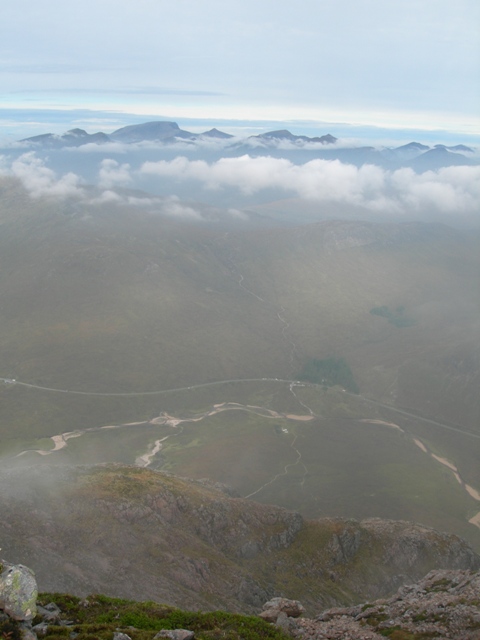 Heaven and Earth! Lovely views down to the road, the Devils Staircase and over to Nevis and CMD

What an absolutely glorious day to spend time on top of the most iconic Scottish mountain around. Fantastic time, wandering, hill spotting, chatting and watching the intrepid climbers coming up the ridge and nipping over to the top of Crowberry tower for their “done it” pics lol (you know who you are lol) 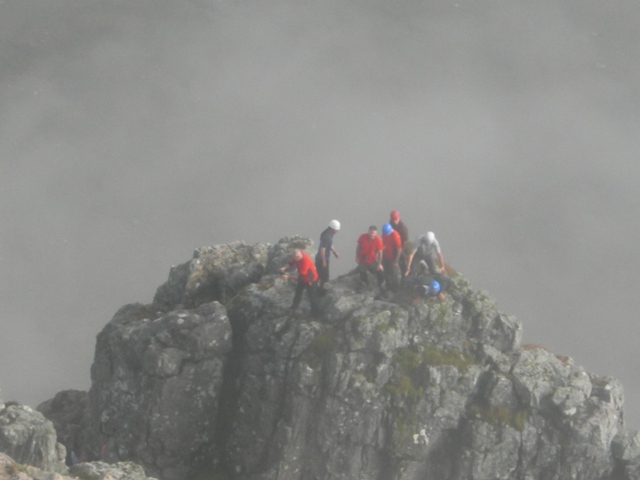 Party party on the Crowberry Tower 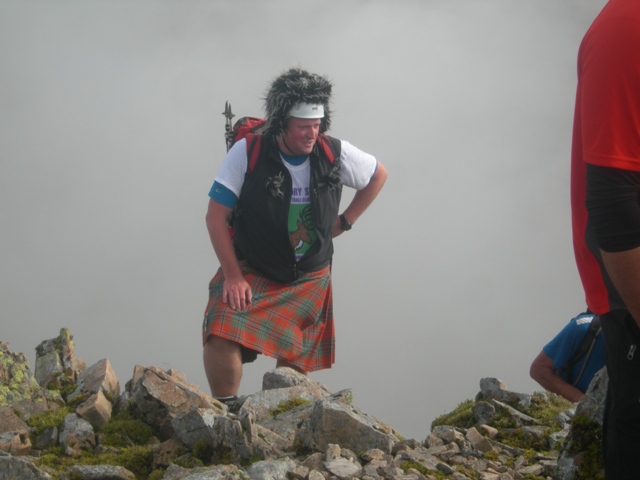 As you are probably all aware, on arrival, Scoob and Fiona were applauded on the last few mtrs, at which point Fiona was scooped up, deposited on the cairn and swiftly proposed to. (Scoob, you are a big romantic,,well done and congratulations to you both) So, having completed their Munros together they now start a new chapter in their life together. On such a perfect hill day,,with a huge crowd cheering them on, this really was a day to remember. 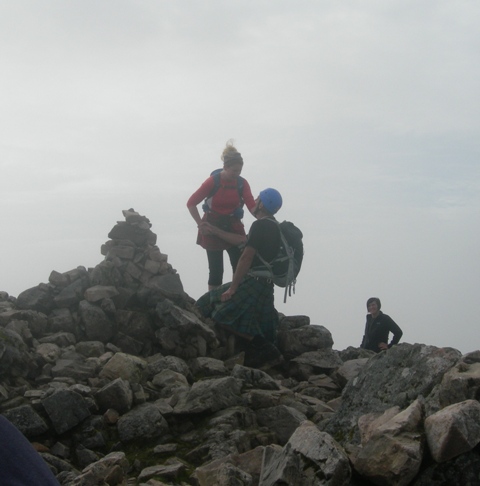 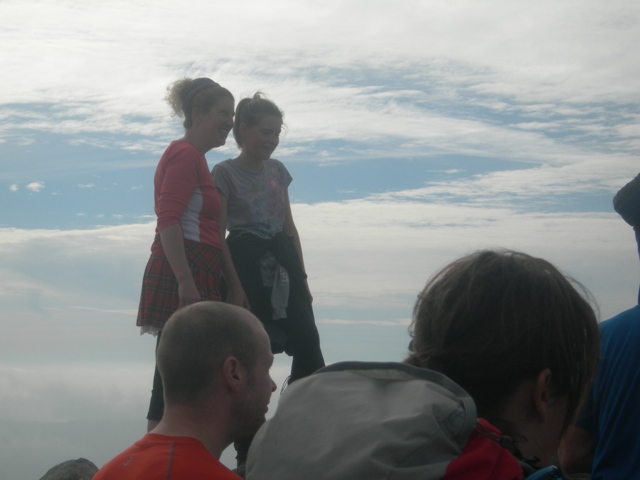 Fiona on her last Munro, with a young girl on her first. 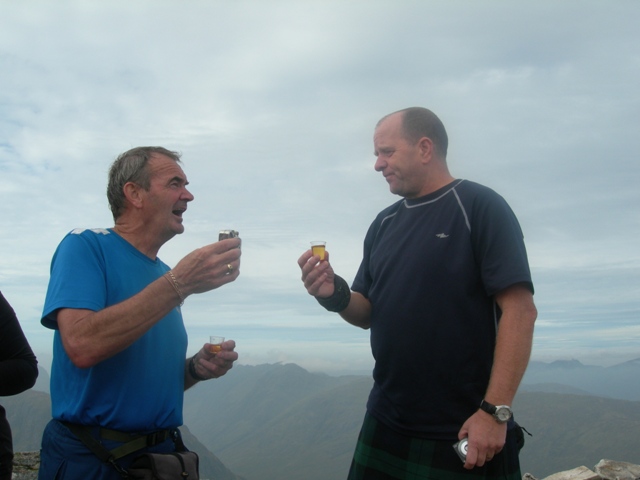 We all headed off the hill, with plans to meet up at the Clachaig (why the heck wouldn’t you?)
The downward trek over rocks and stairs was tricky at times with a couple of boys from another party having a bad fall,,much blood running down an arm lol. Nothing too serious but some grumpy faces as we passed by.

Our party numbered about 20+ and again we were pretty spread out on the way down. As ever, picking your way downhill on rubbly scree is much harder than climbing UP so I just took my time and let people pass etc when necessary. 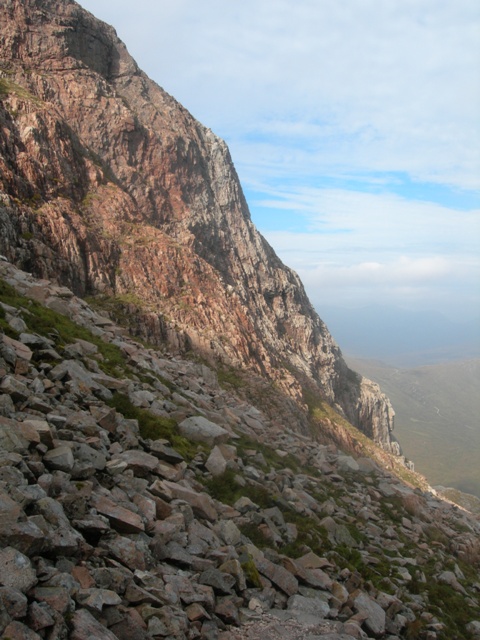 The northern side of the corrie on the way down after a fabulous day.

Pretty soon, back down to the burn and passed the cottage to the car park.

Getting out of the car park is a logistical nightmare,,again, due to the poor road surface. I had to walk the route to work out how my narrow wheelbase and low exhaust would get out and thanks to Scoob and Tomsie, guiding me, I made it back to the main road.

The drive down to the Clachaig was glorious, sun shining, colours of browns and greens all around and Am Bodach (AE) having me straining to look up ,,not a good idea when following a line of traffic on a winding road)
Smashing dinner at the Clachaig, too many beers and back to the campsite. A fine day all round.

Well done Gill on producing yet another engaging ( can you see what I did there??

As one of the unfortunate peeps who missed out on this unique day on the hills, I can honestly say I was totally gutted to be somewhere other than with you guys and gals

Looking forward to meeting you on a hill sometime soon.

Good to meet you too, glad you joined us. I've always found WH folks such a friendly bunch.. and you never know who you'll meet

One thing to say about this report, photo of the tower everyone's wandering about and Ceaser is posing hand on knee