I'd been checking the forecast for a week prior to our outing and for nearly a week all the websites I use, including WMIS had told me it would be a great day for walking around Ben Lawers, warm(ish), clear views, and almost no wind...brilliant, was really looking forward to it, but would they be right????
We met at the Ben Lawers Hotel car park at just after 9am, funny how getting up at 5am is a REAL bummer when you have to go to work, but it's ok when you're hitting the hills!!
The walk up to the base of Meall Greigh was fine, quite an easy walk up through the wooded area, we'd missed the path up to the right and ended up at the footbridge, but a few mtrs hike over some rough terrain brought us back to the correct path, and so we headed up the fairly steep climb to the summit of Meall Greigh. Loch Tay at the start of the walk. Just in case we'd got lost! The path up through the woods, quite a lot of bracken! Looking over to Meall Garbh and An Stuc, I was sure the cloud would liift before we reached them...it didn't! The trek up Meall Greigh.

As we got higher the temperature noticably dropped and the wind picked up.....a lot! When we reached the summit it was bl**dy freezing and by now I'd put on as many layers as I'd had in my pack, except my gloves...which I'd left behind on the kitchen table as I didn't think I'd be needing them! A few pics at the top and we set off along the path to Meall Garbh. 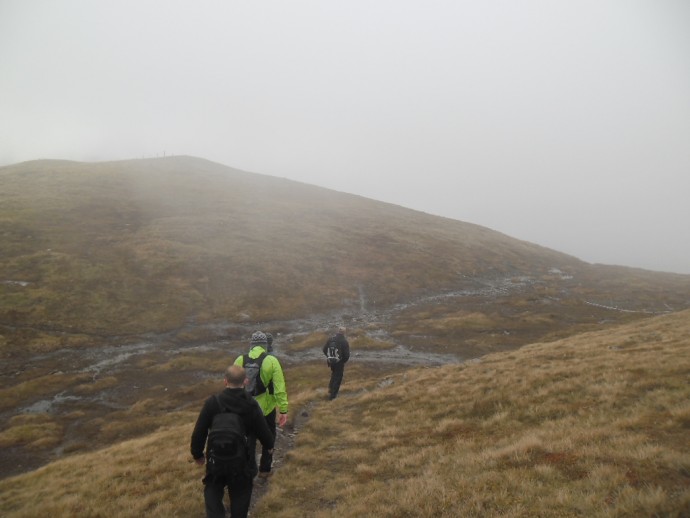 The path over to Meall Garbh. Our group on the way down to the bealach between the two Mealls. We followed the fence almost to the top as per the instructions on the WH route for this walk and we soon found ourselves at the top...summit No2. At this point I put away my walking pole and headed along the path towards An Stuc...or so I thought, we soon met the couple who'd left the summit a few minutes before us, both groups had lost the path we were following, we soon met another group of three guys and a dog coming from the opposite direction who were also looking for An Stuc, so 11 of us and 1 dog were looking for the path off Meall Garbh onto An Stuc, which was eventually found, thanks Malcolm, his Garmin GPS, and an OS map. We very quickly found ourselves on the steep ascent of An Stuc, not quite as scary as I'd expected,apart from one wrong turn, we soon made it to the summit. Going up An Stuc.

We considered going for Ben Lawers but when we'd reached Bealach Dubh, and the cloud hadn't lifted we all agreed that a descent down Raven Gully out of the cloud and back to the cars was the best idea...so off we went! It is a steep climb down but it soon levels off but is quite boggy, so watch your step! Going down Raven Gully...there were Ravens here, at least three! 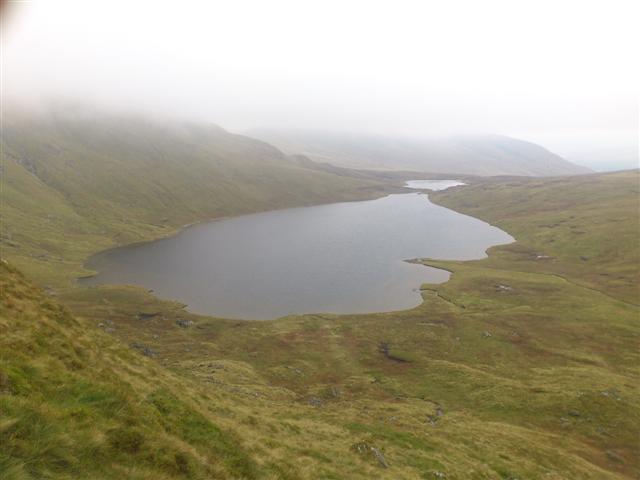 Lochan nan Cat on the way down the gully.

Once down next to the lochan, we followed the rough path, which was very boggy in places, so watch your step, this path eventually becomes better after the dam on the burn, and soon crosses the footbridge to join the original path up through the woodland. 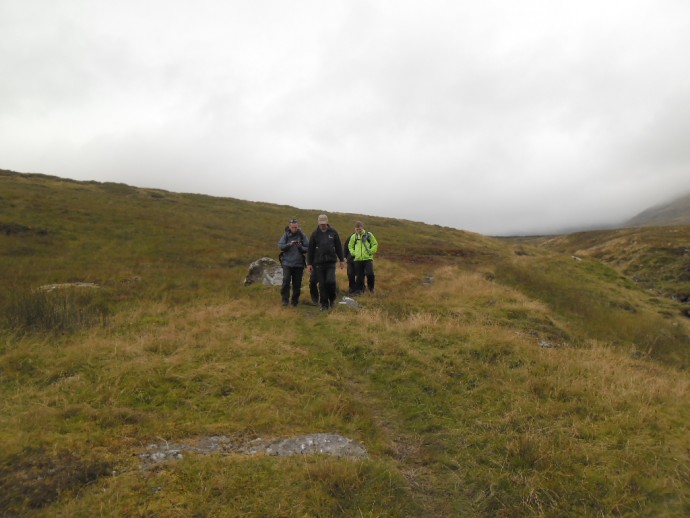 The trudge back along the path. Dam on the Lawers Burn. The footbridge...it was easier to cross the burn on the rocks! This wee chap crossed our path on the way back down through the woods. In the Ben Lawers Hotel bar...cheers!

A great walk even if the forecast was wrong, no views which was a bit disappointing, but never mind, gives us a good reason to return someday!