I chose Ben Cruachan for today’s Munro bag due to A: The fine walk description. (I’m a sucker for a ridge walk) B: Because I was staying in Luss so only a 1hr drive away (as apposed to my normal 4hr drive from Durham, and C: Because I have toured the power station underneath so was looking forward to viewing it’s exterior rather than its bowels! 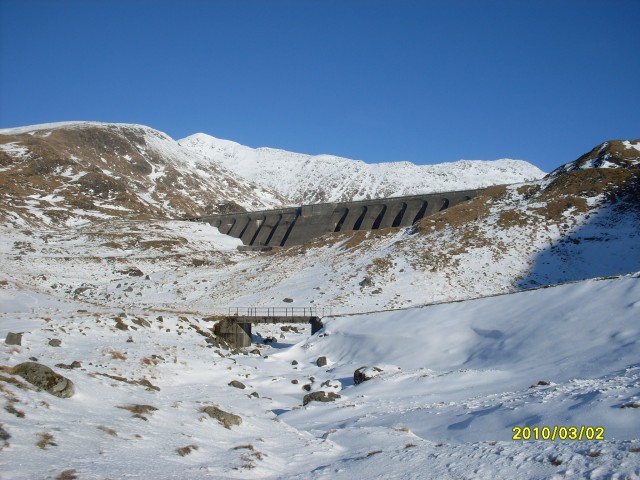 I was not disappointed. Once you get up to the dam through the woods the views are awesome. Especially on a day like today. Not a cloud in the sky, the water was like glass and the air surprisingly warm considering it was -9 when I got in the car at 7.30am. Normally the reading changes on the dash when to car heats up but not this morning. It was still -9 when I got to Cruachan station at 8.40am! As usual I donned all clothing for warmth and had to remove it within 5 mins because of the relatively steep ascent through the woods. Textbook error overdressing at the start of the walk! I do it every time and never learn. 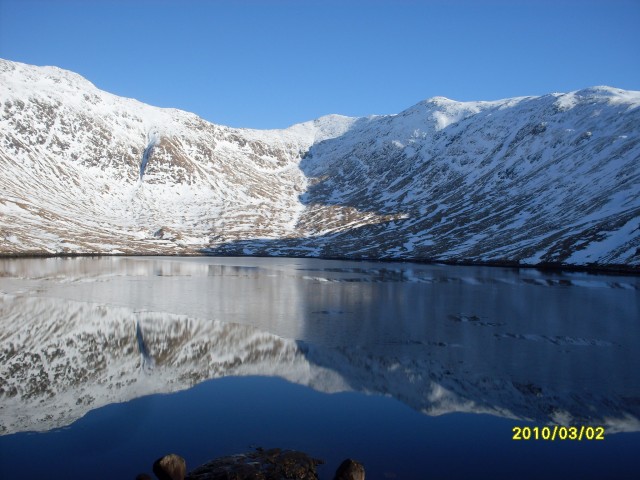 Anyway once the fashion was corrected it was onwards and upwards to the mighty dam wall. When I reached it I was boiling, I was almost down to my T-shirt probably because of the radiant sunshine which had increased the temp to +6 but somehow it felt a lot warmer perhaps due to sweating from the climb. 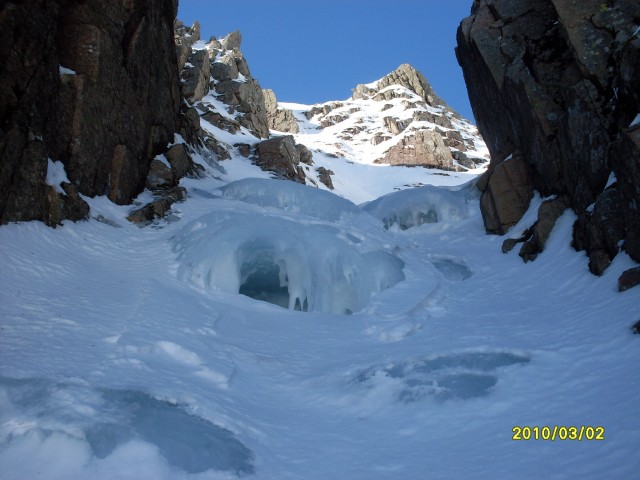 I liked the look of the dam. Pretty cool striking structure if you ask me. Enjoyed climbing the metal steps. It reminded me of a Bond film set. I had visions of Roger Moore chucking some baddy off the top. Overactive imagination strikes again! 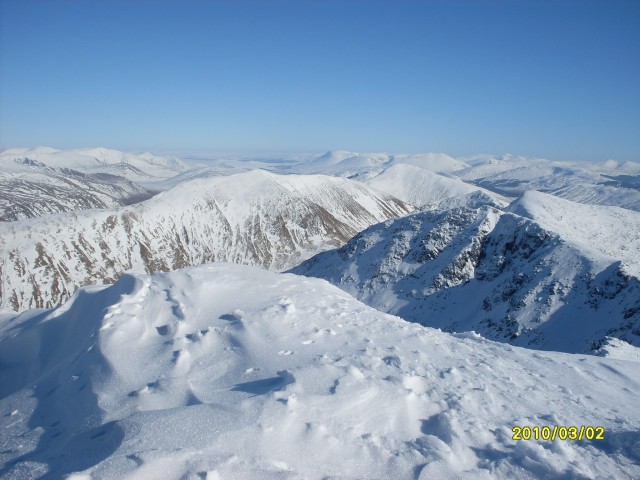 I took the walk descriptions advice, after walking round the reservoir, and headed West after the small cairn up towards Coire Dearg. Once reached I enjoyed a 2 day old ham sarnie. Not sure if enjoyed’s the word but anyway after a 2 hr slog to get this far owt would do! I was struck by the silence while having my lunch. You could hear a pin drop. It was amazing. I decided to don my newly purchased crampons and swap my cheapo walking pole for my snazzy new ice axe. As soon as these were on I spotted a gully worth investigating just right of where you would normally ascend the first part of the ridge. It looked a lot easier than it was to climb and I started feeling a little unsure of my ability to continue. The thought was a bit late however as I was now over half way. I continued tentatively upwards and soon grew in confidence as my gear was proving to be great to use and doing the job nicely. 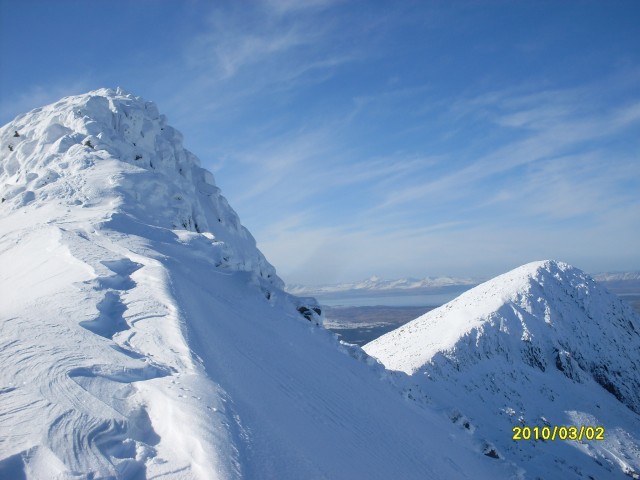 After completing about 75% of the gully I came across some interesting ice formations and removed my also new sunglasses and popped them though a loop on my backpack strap so I could take a photo. After struggling, even with my ice axe, to climb another 10% I realised that they had decided the head back down the gully themselves without saying tarar! To my horror they had stopped about halfway down which meant either A: leave a brand new very expensive pair of glasses behind (No! they were not stolen, it had been a good month ok!) or B: well you can guess. After much cursing, sweating, aching and another 50% ascent I flopped out onto the ridge exhausted but looking cool as out, all shaded up! Later, after a hard slog (which wouldn’t have been so tasking if I hadn’t climbed the gully 1.5times…whinge!) I reached the summit. What a view! I am sure I could see Ben Nevis in the distance but my geography isn’t great so don’t quote me on that. I was amazed at the number of summits all around me. I took a few snaps then headed along the ridge impressed with the ease my crampons were carrying me. I didn’t take long to tire though. I was quickly starting to flag and my legs were all over the place. Soon I was sick of walking like Stevie Wonders **** puppet! I found it really difficult to quordinate my feet I was so tired. I had to wade through some pretty deep & thick snow which didn’t help.
I stopped for dozens of rests then I ran out of water. Funny how you suddenly become extra thirsty when you have nowt to drink!! During what felt like a million more stops, and still blaming the pummelling gully for killing my legs, I reached the summit of Drochaid Ghlas before traversing to the top of Stob Diamh. Loved the views but was plagued by the seriously sore legs so I decided to head down the grassy flanks to the dam ASAP. I was glad to reach the car shortly after at 4.30pm. A complete time of 7.5hrs in total. 2 Munro’s in the bag and some of the finest weather and views on the hills I have had the pleasure to witness. A tiring but excellent day. Stroll on Ben Vane tomorrow.

I was roasting walking up past the dam as well. It is a little bit of a heat trap with the water and shelter all round. Fantastic day you got up there!

Also that gully looks cracking. Can you identify it on the map? I love gullies!

I know what you mean on the exhausted staggering - I do quite a bit of that myself sometimes!

You don't need a drink with all that snow - just eat some of that - before you do though, make sure you keep yourself warm when you do it as hot or cold substances in the mouth are the quickest way to heat up/cool down!

If you look at the OS map the gully is located in square 29/06 just north along the ridge 20m above the Bealach an Lochain. Sorry i can be more specific, i hope this helps. If you follow the walk route you will see it on your right as you near the ridge.

mountain coward wrote:I know what you mean on the exhausted staggering - I do quite a bit of that myself sometimes!

You don't need a drink with all that snow - just eat some of that - before you do though, make sure you keep yourself warm when you do it as hot or cold substances in the mouth are the quickest way to heat up/cool down!

Nice Tip about the snow MC cheers Buddy. I did atempt to eat a little bit but i wasnt sure if it would be ok. I remember watching the Cairngorm surivor episode of Bear Grylls but couldnt remember what he said about eating the snow or drinking mountain water. Now i know!

actually... I read something about your body actually uses more water to provide energy to melt the snow than the water it gets