Last monthI read a report on the Ochil Hills and thought I would write one of my own, on Sunday 28/2/2010 I set out to go to Ben Cleuch by way of the Law it was not a bad day exept for the wind which was very strong infact I read another report from a guy called Monty about him and his pal Donny and I am sure he said the wind was about 50 mph any way he had skis on which made coming down easy, anyway I spoke to them for a few minutes they said they had turned back at the top of the Law because of the wind, I carried on for a wee bit further then turned back not even getting to the top of the Law. Then on Tuesday I had another go, what a difference, the weather was glorious but I could have done with the snow being a bit firmer as it was hard going, anywaygot to the top of Ben Cleuch in 2hrs 15min which I thought wasnt to bad, had my tea and set out for the Andrew Gannel Hill and down to the Blackford path there was one set of footprints which I followed, that was a bad idea the snow was up to me knees I should have gone up onto the ridge under Kings Seat might be Elistoun Hillthere had been a lot of people on it earlier so the going might have been a wee bit easier, still got back to the car at Mill Glen safe and sound and had a great day. Seadog These are some photos I meant to include with my last post.
Seadog 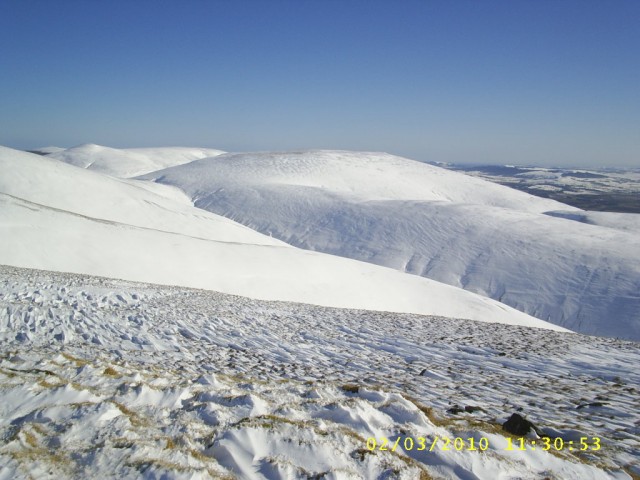 Top of the Law Blackford path and the way home Hi Seadog. Me and Danny (danrun) were up there on Sunday and the wind at the top was terrible. I suggest it was about 50mph but I am only geussing. It certainly was strong enough to discourage me and Danny from continuing onto Ben Cleuch. I took ski's with me and ski'd some of the way down. Was it you we spoke to about halfway?

Its a tough little hill