The second in my new series of "Only a..." walk reports describes an outing designed for visitors who, although reasonably used to walking, are not accustomed to highland terrain. The idea was to find a walk covering a variety of environments, some height but no precipitate edges, and providing them with a sense of achievement. Oh yes, and not too far from home, as well as entertaining enough for The Whippet. So, open hillside, forest, bog, river crossing, and deer should do the trick. And off we went to Glen Orchy, two visitors, The Whippet and myself.

visitorsloop.gpx Open full screen  NB: Walkhighlands is not responsible for the accuracy of gpx files in users posts

Parking at Eas Urchaidh presented no problem and, after the standard photographs of the Falls we head off up the trail signposted to the Pinewood Reserve. 2km it says. This is a lie. 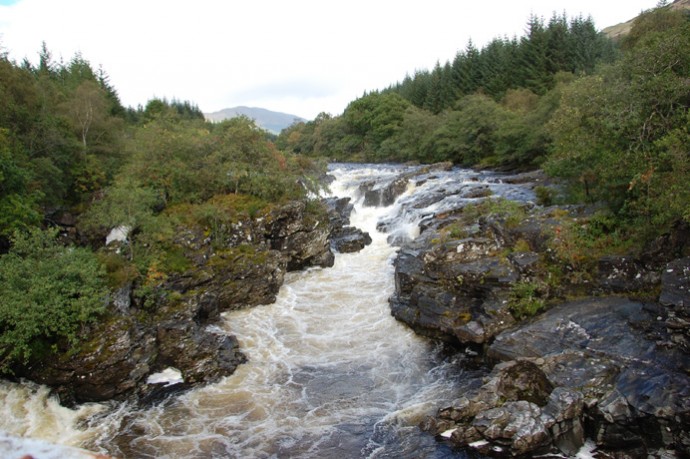 The Falls of Orchy (though shot on another, more rumbustious day)

The excellent track undulates but rises steadily, shortly (well, not so shortly with the visitors) arriving at the somewhat surreal sight of a solitary picnic table in a glade by the Allt Broighleachan, just after passing the turn-off for the cycle track to Bridge of Orchy and the route to Beinn Mhic Mhonaidh. From here the climbing is steadier and the track a little less defined, though still good. As usual, The Whippet wanders hither and thither on the end of his long lead - he would be away in pursuit of deer and rabbits if I let him off - and he is puzzled that we have to keep stopping to wait for the visitors to catch up. This is not his customary walking style. "It's only a visitor walk" I tell him by way of comfort, but he seems little comforted. The path now enters the fenced off section of the reserve, crosses a stream which presents the visitors with the excitement of their first challenge of the day, and climbs through some wonderful trees now surrounded by autumn bracken which is golden in the (patchy) sunshine. 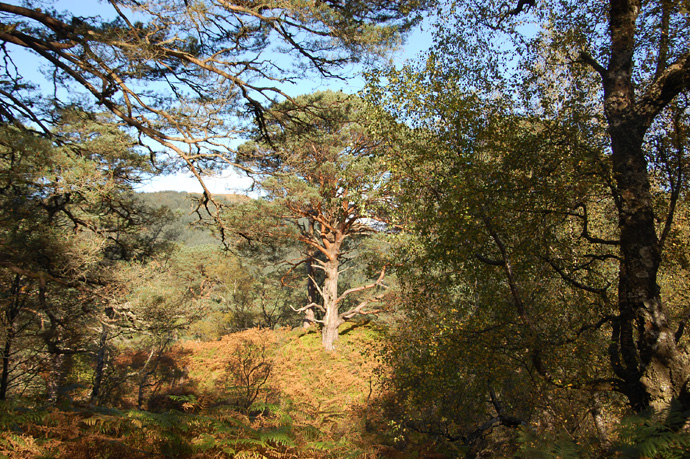 After leaving the reserve through another gate, the track heads up the hillside with excellent views of Glen Orchy opening up behind. 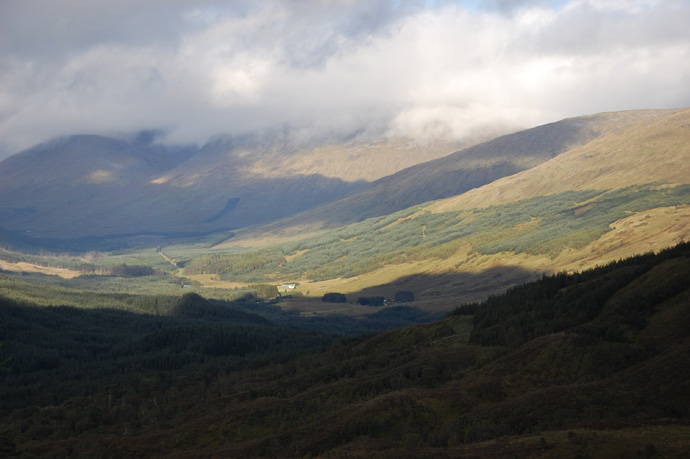 Across on the east side of the glen there are good views of part of Coire Daimh on Beinn Udlaigh, so beloved of ice-climbers in winter but sadly left in lonely neglect at this time of year. It's a lovely coire, well worth a visit if you are in the area, 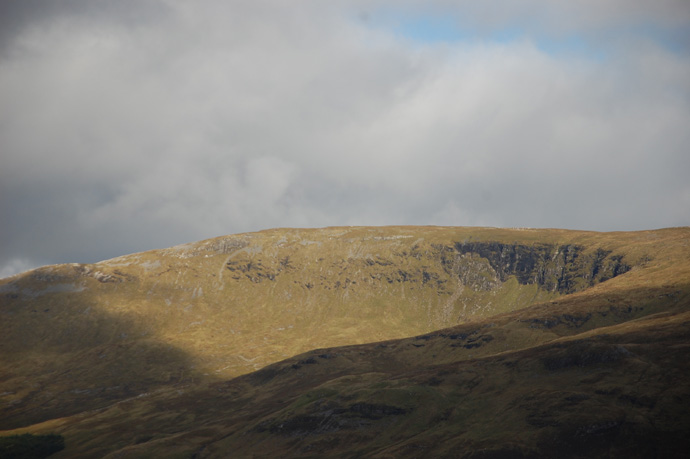 As the path climbs along the open hillside we look for deer, a consummation devoutly to be wished for by the visitors. But they remain hidden, and we have to be satisfied with the roaring of the unseen stags echoing around the hills. I say 'roaring', and sometimes it does indeed sound rather leonine, but often it's closer to a noise somewhere between a moo and whooping cough. Anyway, first failure of the day - no deer. Upward we continue until the path levels out and heads back into forest where it becomes rather less distinct and boggy. The visitors are guided across a particularly boggy section which requires swinging around on a tree branch to avoid wet feet (The Whippet and I have recced this walk) and, exquisitely, the focal point of the walk suddenly comes into view and draws ooohs from the visitors. For tucked around a corner of the trees lies Lochan Coire Thoraidh, a lovely place which I first encountered by accident when idly following this track without consulting the map. 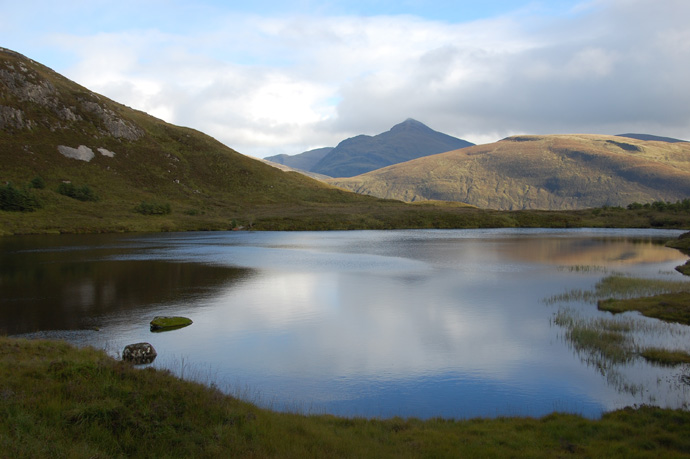 After much photography we work our way around the left side of the lochan where there is a trace of a track interspered with boggy sections. On the east side lie the remains of what the OS map describes as Boat House in barely merited large letters. The Whippet inspects it in the hope of ancient biscuits. 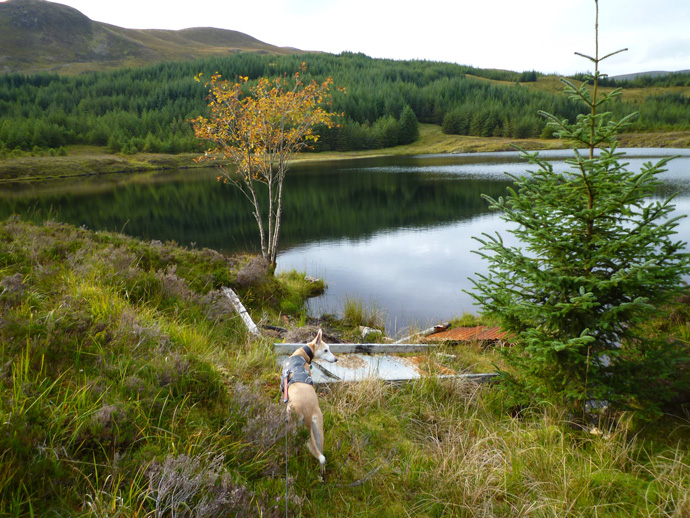 Now it's time for the downhill, though should you follow this route with more adventurous and less height sensitive company it is possible to head out along the ridge to the summit of Creagan Glas and then drop down to the path. 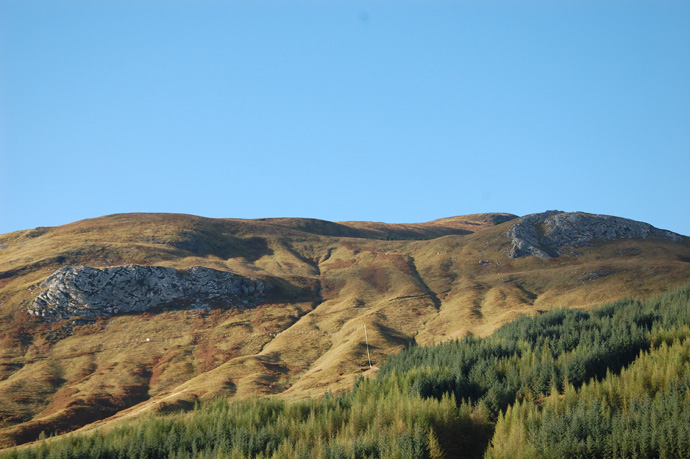 Creagan Glas is the crag on the right, and the downhill route can be seen as a line below it and running below Creag Ghlas lower and to the left. The lochan is away to the right of the picture which was shot from down in the glen. 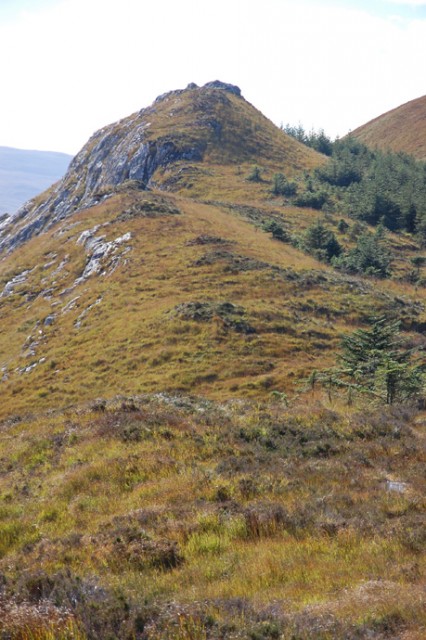 The route from the lochan up onto Creagan Glas

You might even include Creag Ghlas, though that I haven't done and I suspect that there is an awkward fence in the way of that route.
The downhill path is slippery and wet, at times more like a rivulet, not easy for the visitors. 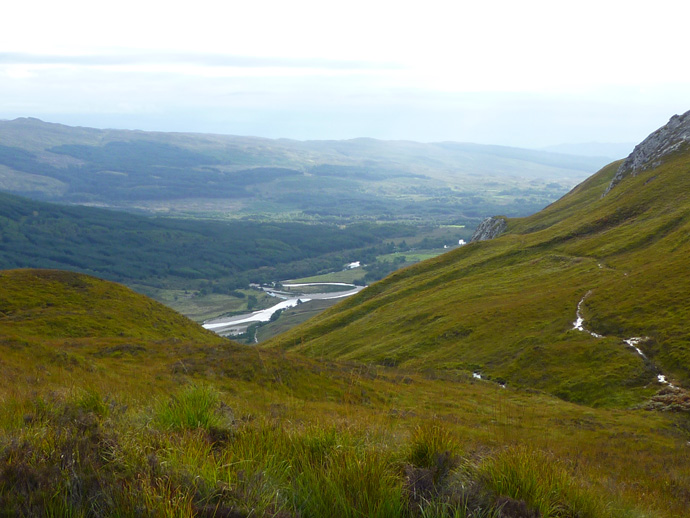 The streak of silver is the 'path'

Half way down one of the visitors realises that she has lost her scarf somewhere up above. I swear that The Whippet rolls his big brown eyes at me at this failure of proper hillcraft. He, of course, never loses anything. The dogtoys that I find scattered around the garden are not lost; just parked, for future use. Anyway, the visitors are not keen to retrace our steps back up the slippy path and I promise to return the following week in search of the missing item (which I do, The Whippet finding the scarf nestling happily in a bog). Slowly, slowly we work our way back down to the Orchy. Our self-appointed guide, The Whippet, amazes my by finding the indistinct route across a broken fence at the bottom of the hill (it's at least a week since we walked this route the other way), but then lets us down by heading through a gate and along the fence at the river's edge. I think he has the scent of something because, although the gate is right, the route then should turn uphill a little to pick up the proper path. So we have to struggle through undergrowth to get back on route. We pass the bridge at Catnish - closed unfortunately - and follow a route through the forest which is clear enough though boggy in parts and requires us to negotiate several fallen trees. Navigational care to be taken here should you try this walk. Finally, after a decent sample of varied highland terrain, we are back at the Falls. It has taken over 5 hours to walk a route that The Whippet and I have done previously in 3 hours 15 minutes. But the visitors have enjoyed it, so all is well (except the scarf which will lie lonely and wet up there for another 10 days, waiting to be rescued).