Day 2 of my initiation into the Torridon hills. After an unforgettable day on Liathach yesterday. Tomsie and I had a slightly later start for Maol Chean-dearg. Breaking camp, packed up and over to Annat for about 8:20am. The local deer population were making their way back from the waterside, and a stag ran across the road in front of me, a few of the hinds were already up on the wee rocky outcrop to the left. Parked up and after a couple of false starts, did I lock the car?, go check, NO! Have I got my poles? Go check, NO! Finally headed off at 8:30am for Munro 43. 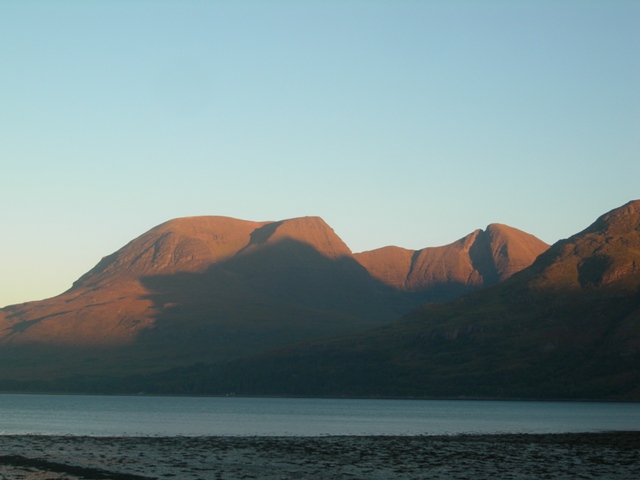 The path is clearly signposted, beside East Lodge and marked for Coulags. The route for this hill on WH comes in from Coulags but John had investigated an alternative from this direction and thanks to Scoob and Fi, had this on the GPS. The path in is great, climbing gradually over the landscape with great views over yesterdays achievement and on to todays target. We stopped often for pics, a look around at the scenery, lochans, beaches , boulder fields etc. There are a few small rivers to ford, 2 with very large stepping stones. The path was boggy in bits but we managed to get over and round fairly easily. 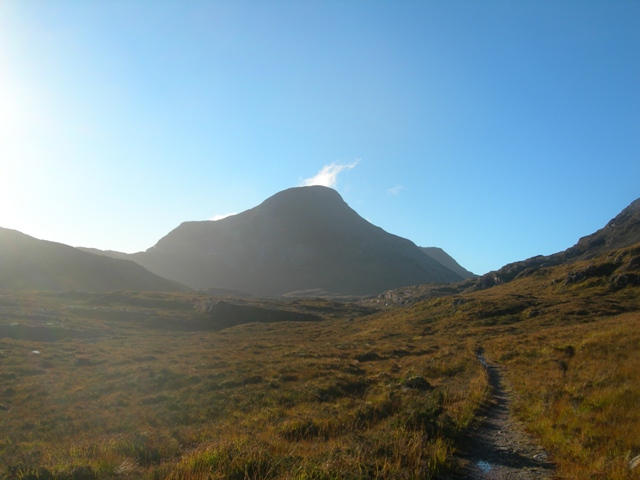 Boulder field with Liathach in the background 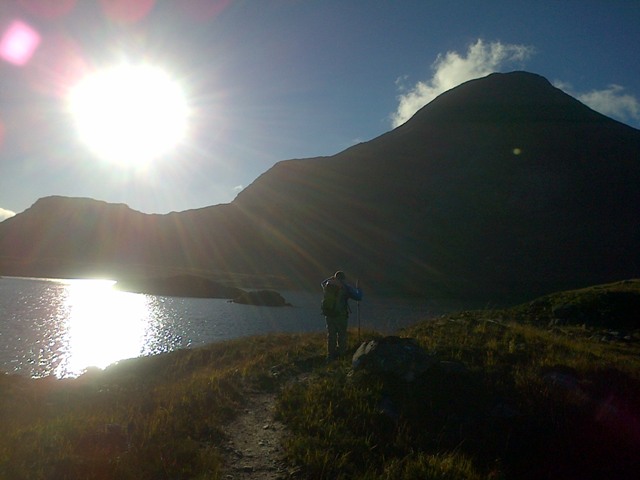 Jet passing over the hill

We carried on, around the hill until we passed a cairn, marking a route up or down the hill. This still looked very steep but checking the bearing etc, we moved on a bit further.

Almost at Loch Coire an Ruadh Staic, we looked up to a couple of gorges and a possible route up. We opted to head up Fuaran Mor then cross diagonally back to the first of the gorges if it proved to be too steep. This made sense and we zig zagged our way across and up. A local corbet , Stuc an Coire Laoigh I think(!)

John signalled to keep low, having spotted a stag up ahead, who had obviously seen or heard us too. When I caught up,,he was moving back and forth, staring in our direction, (the stag,,not John!) We then spotted the rest of the herd who quickly moved off to the right, below the second gully. At this time of year, stags need to be given a bit of respect, breeding season etc,,,dont want to step on any antlers.

We had to negotiate a few bouldery areas, where rocks were unstable and moving. Picked our way over then started on the steep section. At one point, the grassy, rock covered face was so steep, that when we were standing upright, we were about 18” from the ground, so we just hung on, scrambled up and gradually it eased.

The top of the gully is around 820-830 mtrs and its then just a gradual climb up the side of the summit,, reminiscent of the Pap of Glencoe with the rocky scrambly stuff all over. John had gone ahead,, no surprise there lol so when I reached the top, had to have a good look around for the cairn. Our fab views all the way up had now disappeared in clag. No sign of rain etc, just low cloud. Reached the big broad cairn with not a view to be seen. Was really looking forward to seeing Liathach from here, as we had cracking views to here yesterday. No such luck. Wind had whipped up and we hunkered down, extra layer on and a bit of lunch. As we headed off, we added a few rocks to the marker cairn for the descent, hopefully in the snow, it might be better seen.

As soon as we started to descend, the cloud cleared and we were able to see both gullys down. We got to the one on the left, not our ascent route, and speculated using this to get down, narrower and steeper, but would let us drop height a bit quicker. Rocky in the middle with grass and heather to the sides, I opted to stick to the non-rocky stuff, John, a mixture of both. Progress down was a bit faster than I anticipated. The last section of steep stuff was pretty much a series of small rivulets running down,,very boggy, muddy and wet. I stayed off my bum for most of this,,cant say the same for Tomsie lol The route down the gully

As the slopes lessened and the path grew closer I had a chance to look back up at the descent, challenging but hey,,we were down. Back to the path, quick intake of fluids and a change of socks for Tomsie. 2:40pm Headed off down the path,, no real stops here so able to knock about 50 mins off our walk in. Tomsie on the road home

Back at the car at 4:40pm. Change of clothes, wee munch on the leftovers and both headed off for home. 4hrs back to Glasgow for me, non stop, shattered, petrol tank on fumes, me too also! But, this has been a totally BRAWSOME (new word) weekend. Great hills, great company and a pat on the back for me. lol Thanks again to Tomsie for a great day out. Well done on #48 Gill. I watched the Munro Show episode earlier on Liathach.
The Torridon mountains just look brutal, for want of a better word. So many sharp ridges between peaks. I'm not worried about heights or scrambling, but the views on those bad boys give me pause for thought.
I suppose your an expert at exposed ridges now, after the AE though, eh Gill.

Some great photo's there. Like the one of the stag in the morning. My favourite has to be the cloud over the summit, making the hill look like a volcano though. Very cool coincidence.

(although The Proclaimers were no bad on Saturday

Another good day, only bad point being the clag at the summit.

Advice would be to turn off at cairn on path, still havnt looked to see if it was a Corbett.

Thanks for a great weekend

, hope I wasn't to fast on walk out

Your link to photo's isn't working

Another good reportGillG, pitty about the clag Tomsie on his arse i would have been laughing all the way home

quoman wrote:Another good reportGillG, pitty about the clag Tomsie on his arse i would have been laughing all the way home

Im now reliably informed,,his arse did NOT touch the ground!!!!

quoman wrote:Another good reportGillG, pitty about the clag Tomsie on his arse i would have been laughing all the way home

Im now reliably informed,,his arse did NOT touch the ground!!!!

Just as well would have being in for a right soaking

There is an easy route up from the south east if you carry on the path to the col!

Yes, better known as Beinn Damh, a Corbett and another very fine hill!

There is an easy route up from the south east if you carry on the path to the col!

Yes, better known as Beinn Damh, a Corbett and another very fine hill!

Easy schmeezy,,,,we are intrepid persons of adventure and will not bow to a challenge

Easy schmeezy,,,,we are intrepid persons of adventure and will not bow to a challenge

Quite right, too! I also have something of a reputation for "off-piste" routes......

Oh, some tasty photos in there!

And "steep fecker" - is that a recognised hillwalking term? It's just that I've never heard McNeish use it on TV or in any of his books!

Hey,,McNeish thinks you can do the AE in 3-5 hrs,,, translated,,,that means "the lying fecker" lol

Hey,,McNeish thinks you can do the AE in 3-5 hrs,,, translated,,,that means "the lying fecker" lol