Liathach the leviathan, oh what a day

Liathach the leviathan, oh what a day


My introduction to Torridon - Day 1

Tomsie and I had agreed to meet up again for a walk after Glencoe, and 2 areas were on the table. Crianlarich, (nearer me ) or Liathach, (a lot further away! Lol)
Since I have so much more to tick off, let him decide and Liathach it was to be.

Driving up on Friday afternoon/evening with an early start planned for Saturday I was a bit wary of my first venture into the mighty Torridon. Heard a lot, read a lot,, was I up to this?

I turned off the road at Kinlochewe as the sun was getting low in the sky. So low, I couldn’t see a bloomin’ thing. Couldn’t raise John on the phone, so just kept driving,,was about to turn back, thinking I’d gone too far when I saw the sign for the campsite. I’d left it up to John as to whether we used Torridon or Kinlochewe, the former being a wee council run field with public toilet and shower block. Torridon won and apart from being a tad waterlogged around the track, it was fine (and free!)

The campsite lies in the shadow of Creag Dubh nam Fuaran, which was more red than black in the setting sun. The weather forecast for the weekend was great, but it was decidedly chilly, even at 6pm. Camp set up, chicken curry on to heat and a wee can or two from Tomsies boot! Accompanied by the sound of rutting deer, Bliss!

Early night and up around 6am. Booted up and parked up at the start point about 2 miles or so from the campsite at 6:55am, still dark and the sky full to bursting with stars,, amazing. My first hill start in the dark. We had our head torches on but once your eyes got accustomed to the dark, no need to have them on. This was magical, the sky beginning to brighten to the East and off on a fab day. Sunrise to the East Sunrise colours to the west

The path climbs up and across Allt an Doire Ghairbh with the sky brightening by the minute over our shoulders. Lovely big waterfall and great views up to Spidean a Choire Leith getting more like Ayres rock by the minute in the rising sun. 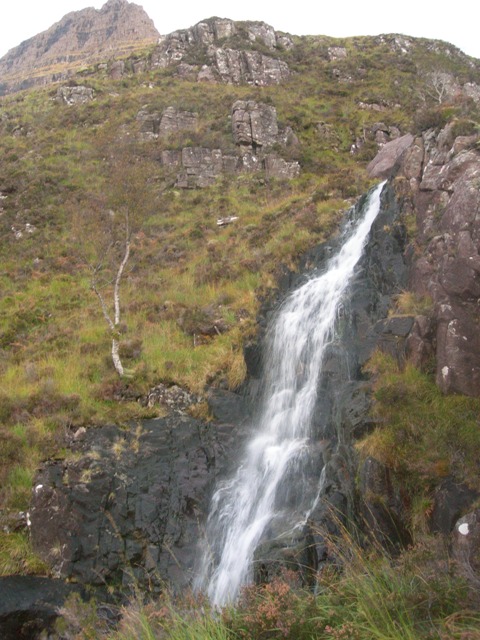 waterfall under the crags 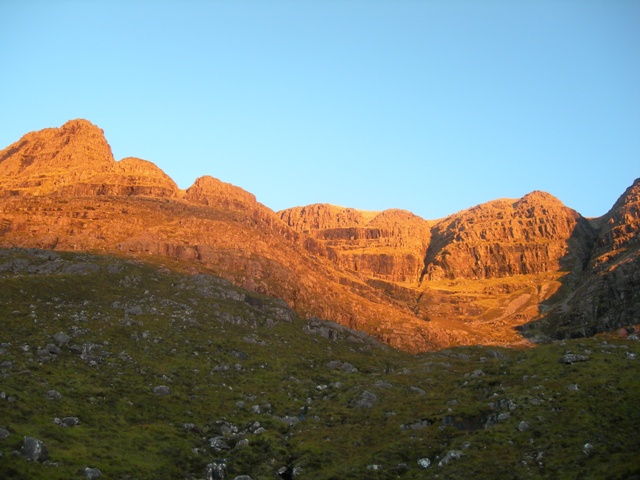 As we approached Coire Liath Mhor, we decided not to take in the tops,,just the Munros. Earlier, we had seen a car pull in to the layby down below, and could now see people on the path below us. Taking in the views at the top and then heading West, The deer were not to be seen but we could still hear them, echoing around the great stone walls of the hills. Just beyond here, we had some swirling cloud with the sun shining through. John suggested we might get a broken spectre and literally seconds later, there it was, with me right in the middle lol I couldn’t believe it, I’ve only ever seen this in other peoples pictures. It disappeared, only to re appear and grow larger several more times. Managed to get a few pictures, a seriously special moment there. (Thanks for the heads up John) The top under Spidean, looking West There was a group of 3 who had passed us on the way. Later identified as Mark, Deirdre and Sue. As we sat at the top taking pics, having some food etc., up popped some more WH members , Davie Sothern, Dean Souter and friends, Weaslemaster and Alison . Great to meet some new WH members and some I’d met before. We ended up all banding together and continuing on in a group of about 11, this was VERY helpful on the pinnacles, lots of helping out on the footholds etc. The first kick up the pinnacles, a smoothish slab of rock, brings you up to a point where you either turn sharp left,,or go down,,straight down, not recommended. Views over to the second Munro of the day Continuing on over the pinnacles, lots of fun, picking routes down, I only used a bypass once,,when John advised it wasn’t worth going over, like one point on the AE, it was like climbing off your fridge freezer lol. A bit of scrambling fun When the last of the pinnacles was clear, we could see the path ahead, up the side of the North facing crags of Coire na Caime and veering round to the North before reaching Mullach an Rathain. This was a good walk round, a gradual slope up and a chance to chat to the rest of the group and take in the stunning surroundings. Give us a wave! Me, Deirdre and Sue

The Northern Pinnacles of Mullach to the North were looking fantastic. There had been a snow fall earlier in the week and only parts of the North faces still had a powdering, a reminder of the time of year, belied by the amazing clear sunny day we had. Munro # 42 and Loch Torridon and the sea beyond Great time at the top of Mullach, taking pics, chatting etc, before heading off for the descent. This route goes down Toll Ban and eventually meets up with Allt an Tuill Bhain. A VERY rocky, rubbly way down, so a careful descent, picking your way through the moving rocks and scree. Looking up,,to the route down.

The party pretty much spread out over the field.
Nearing the bottom, car keys handed to John,,let him run ahead and pick up my car, to drive to the start point for his. Good plan!!!
Dean and I reached the bottom and about a minute later, along comes Percy Puma....good timing or what. We then drove past everyone else on the way to the start point, honest we WOULD have stopped but there really was no room lol.

Thanks to John for suggesting this, and for putting up with my plodding pace. Thanks to the other WH members and friends at the top for their company and encouragement along the way. I still find it hard to believe I do these things, especially when I drive along looking up at fierce big hills, knowing I’ve been up there and thats what makes it all the more special. Very special indeed.

Fabulous, Gill. Really enjoyed reading that and seeing your great photos. I was up on Beinn Alligin at the same time - report to follow tomorrow. Wasn't the weather just the best? Glad you like the area! I still think the pinnacles look scary......

The pinnacles look worse from below Annie,,get yourself up there lol

Twice I'v being to Torridon and what a place.

, now to read the steep fecker

thanks john, didn't quite know how to incorporate our bicycle impression with lights on the way back from the pub but oh that's still making me giggle. Lol.

thanks john, didn't quite know how to incorporate our bicycle impression with lights on the way back from the pub but oh that's still making me giggle. Lol.

I think it was more of a train impression

Cheers W, it was a terrific day and the pinnacles were fab.

fantastic day ,was good to meet up with you again Gill ,glad you were there to notice my jacket being blown over the cliff

ceaser wrote:fantastic day ,was good to meet up with you again Gill ,glad you were there to notice my jacket being blown over the cliff

Haahahaaa forgot about that,,,all I can say is "it wisnae me!!!"

Awesome report Gill. Torridon is beautiful, I hope i get a day on Liathac as good as yours!

What a great day you all had for this beauty

. Thanks PeteR. Certainly was a fantastic experience. I'm in love with Torridon, can't wait to go back, G