Day_2.gpx Open full screen  NB: Walkhighlands is not responsible for the accuracy of gpx files in users posts
Day 2, Barnsoul to Moniaive

This day had the best weather and the promise of some interesting sites to visit on the way, along with the firm promise of a hearty meal from my Mum at the end

Getting out of Barnsoul campsite and onto the open hill proved to be the most difficult bit of navigation for the day. I ended up going up to McNaughton cottage, doubling back through the woods to avoid people's gardens where my map had suggested there was a track, crossing a few fields, avoiding a pheasant filled conifer plantation and at least one bull-filled field to finally hit the open hillside going over Skeoch Hill towards the Communion Stones on the south slopes of Bishop Forest Hill, my first objective for the day. 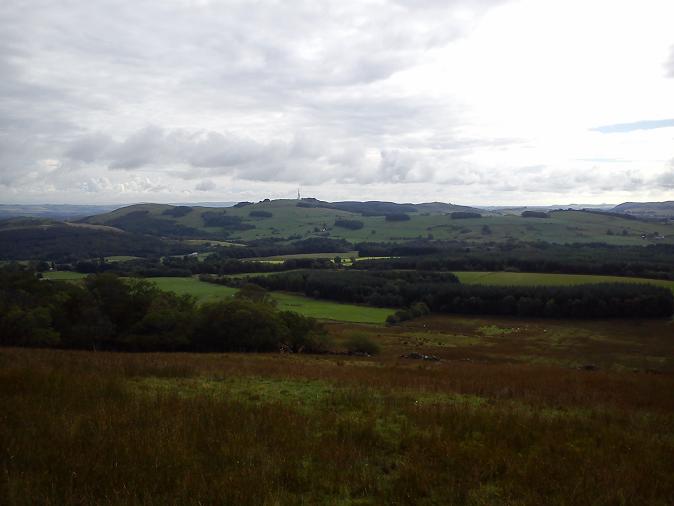 Looking back to See Morris Hill As I approached the Communion Stones, it turned out there weren't just sheep, but also cows in the field, and inevitably, the bull was in there as well. He seemed to have taken up residency around the Communion Stones themselves. So I sat in the sun doing morning prayer while waiting for him to move. If you've ever sat silently near a bull while it eats, it's amazing just how much noise it makes, even when compared to the surrounding girly cows. Anyway, having been there for nearly an hour hoping he'd push off, I eventually gave up and edged closer. It turned out he couldn't care less about me so I got my poke around the monument and the stones themselves and retreated back to the wall line. Communion Stones , the monument, and the bull

The stones are placed in lines for Covenanters to be seated to receive communion during a conventicle, a secret worship gathering. The story goes that 3000 people attended communion here in defiance of the threat to their lives. A quite incredible strength of belief and an amazing number of people for a rural place like this. The persecutors themselves didn't live far away, Robert Grierson of Lagg being a noted persecutor (aka Cruel Lagg) whose abode at Lagg Tower is on the Glenmidge road from Dunscore.

From there it was a simple walk along and over a few walls (distinct lack of gates here) to the top of Bishop Forest Hill. It's a great viewpoint on a day like this - from the Lake District, to the Galloway Hills, and the Lowthers. Bishop Forest Hill top with Queensberry off to the east

I descended the northern slopes, past lots more belted galloway moo cows, and rather than go round the roads, went over the little tops of Muil Hill and Darngarroch Hill. Short grass (compared to the large tussocks at the top of Bishop Forest Hill) made the going pretty easy, although again I found walls and fences needed to be climbed rather than crossed at gates - there just weren't any anywhere near where I needed them.

From Darngarroch I descended through a firebreak in the woods to the track leading to Whiteside and then down onto the road and started going up Bogrie Hill from the road junction. This hillside has such a large array of archaeological features - lots of field clearance cairns, some burial cairns, burnt mounds, shielings, old field systems, a hillfort, etc. My first ever archaeological dig was here on a shieling - we didn't turn up much as far as I remember. We found a belt buckle in the spoil heap, ooops. There's a 1994 RCAHMS report on the survey done on the area (Glenesslin, Nithsdale: An Archaeological Survey). This richness has probably saved the land from forestry and I would suspect is actually fairly typical of what lies under much of the forestry in the Southern Uplands and is now gone forever. Even if we leave a trace for a long time, it doesn't mean forever. Beautiful mosses making up for the dull conifer plantation Ruby tiger moth caterpillar hitching a lift on my rucksack Castramon - this wee hill, with it's lumps and bumps, is a great sight off to the west of my walk Approaching the summit of Bogrie Hill from Knockoure presents you with a particularly ridiculous wall and fence combination to cross, and the summit itself is probably under a fence post - no gates at the top to aid access either. They obviously don't expect walkers. But clear views in the early evening sunlight. Back across today's route to Criffel, the Solway Firth, and the Lake District

I'd spotted a "Mon" on the map at a farm on the other side of Dalmacallan Forest so rather than descending straight towards Moniaive I thought I'd check it out - "Mon" often equals a Covenanter memorial around here.

This meant getting to the main track through the woods. It looked easy enough at the start, but felling has started and they really don't clean up in areas that they plan to replant. I'd orienteered a couple of times in this wood and remembered the woods as generally being pretty tough going anyway, but with the uncleared undergrowth in these felled areas, it'd be unusable. From the top, the way down looked alright Having crashed through the felled area and sunk in the swamps that always seem to follow on from felling, I made it to the track and, on exiting the woods, crossed the fields to get to the Ingleston Farm track. Bulls weren't an issue here. Friendlier beasts lurked here, but I suspect they'd be equally dangerous on a bad day. It's clearly an established farm. The buildings have a well used look, the landscape flows around them. But the landscape is starting to grow all over the Covenanter memorial stone which is hidden behind a wall beyond some rusting farm machinery. It was probably the most poignant memorial I found - the captured Covenanters were shot in the farmyard by Lord Douglas, whose castle home I would pass in a few day's time in Sanquhar. Neglected Covenanter memorial - it says: "In this yard were shot John Gibson, James Bennoch, Robert Edgar, Robert Mitchell, & Robert Grierson April 28, 1685 by Colonel Douglass and Livingstouns Dragoons for adherence to Christs Kingly government in his Church against Tyrannie perjurie and prefaciae [not sure about the last word].

After pulling myself away from there it was a straightforward wander along the back road to Moniaive as the darkness fell. My Mum's food was calling. I'm not sure if many other people have visited their Mum for a retreat, but the pork she made meant that the lack of silence was more than compensated for. Thanks Mum. Scotch mist creeping over the fields near Moniaive