Halfway mark, Disneyland and cars up the Drumochter hills

Halfway mark, Disneyland and cars up the Drumochter hills


I love it when a plan comes together! Easier said than done, specially after my last nightmare on the hills, but then there are the days when the hills make up for it.

Well at least that's what I keep on telling me anyway.

4 Munros away from my 'Halfway' mark, made my feet even more itchy than usual. The Drumochter 4 sounded like a good plan to get the missing 4 under my belt.
The weather did not look that promising, but at least dry and 30% of cloud free Munros was at least a 30% chance to get some views.

I did not fancy much doing the whole trip alone, but as luck had it, everyone I asked to come alone was off sick or busy.

I had managed to leave the house just after 7am (I am not one for getting up early) and after a 3h drive I finally arrived to a beautiful cloud free day (the weather forecast could not have been any more wrong). Setting off I crossed the railway line and made my way along the track. The ground was frosty and the lonely cries of birds of pray could be heard in the distance.. Getting deeper into the hill site, the constant hum from the A9 faded and the rutting roars of the stags broke the silence...magic sound! Deer and stags were everywhere, but the stalking season had made them cautious and trying to get pictures was difficult. 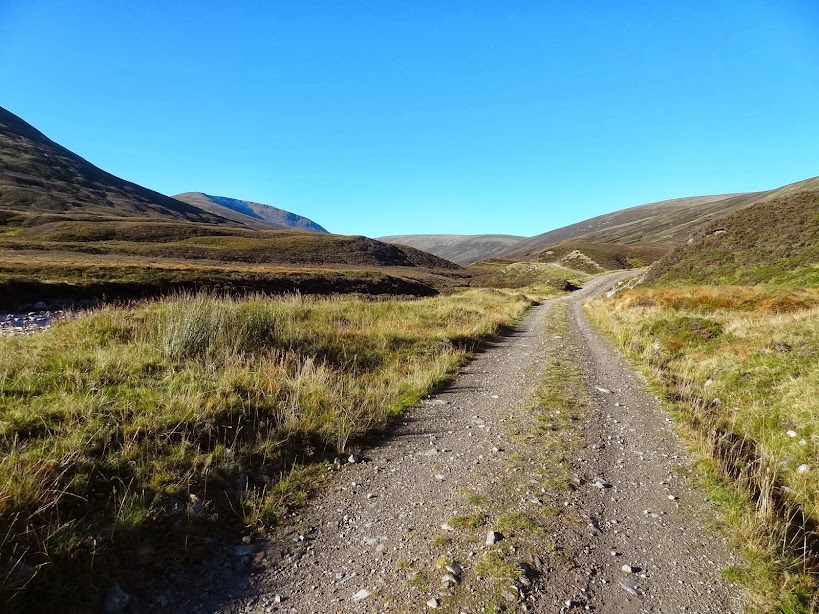 The start of the path in glorious weather

made me realize I would not attract anything but strange looks, if I would ever make that sound near friends.

Moving along I had crossed the new bridge and followed a faith path leading towards Sgairneach Mhor. The path faint in places lead me through deep heather and Ptarmigans who have the annoying habit to simultaneously shriek and fly up in the air by the time you nearly stand on them, left me with many jumpy heart stopping moments - I shall never get used to them!!! 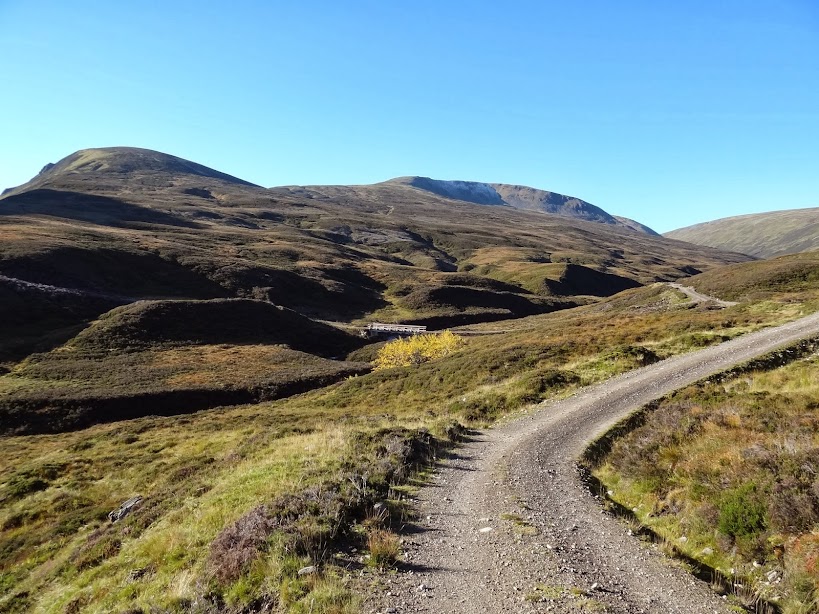 The bridge and first Munro towards the right of it 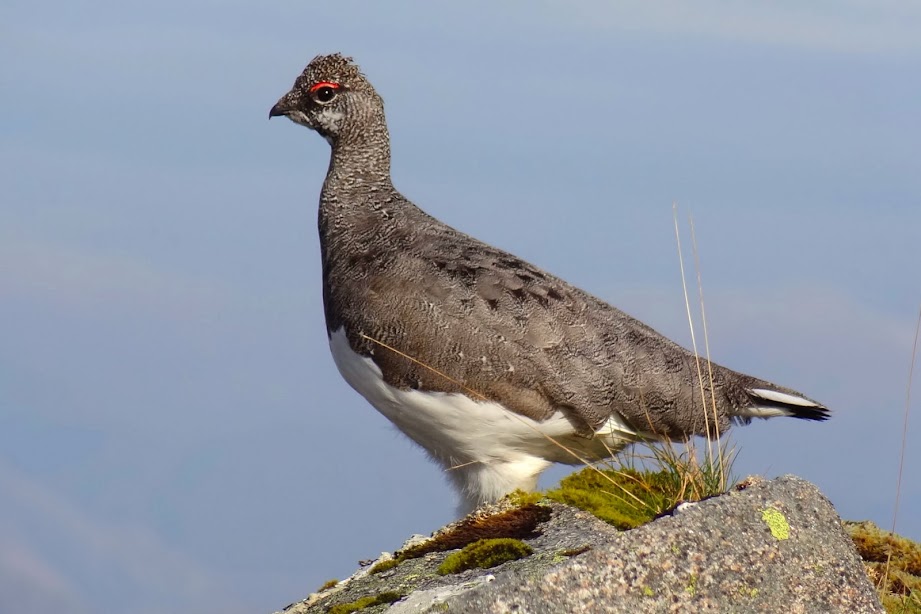 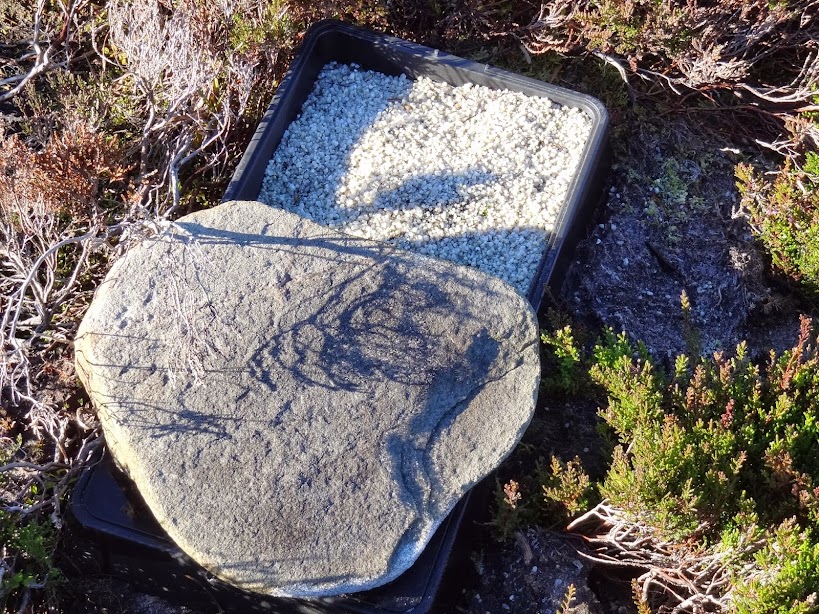 Salt for the deer??

Having reached the top of the first Munro I met the first other hill walker of the day. After a chat I moved along towards Mam Ban and having reaches the highest point found a spot to have my lunch. I realized later that I had actually come too far, which resulted in a walk through peak bog, but time was made up quickly again and soon I stood on Beinn Udlamain. Here I met another set of hill walkers and realized that most people must do the hill from the north to the south...that explained the missing cars when I set off! Having a chat and the chance to get my summit picture taken I moved on. 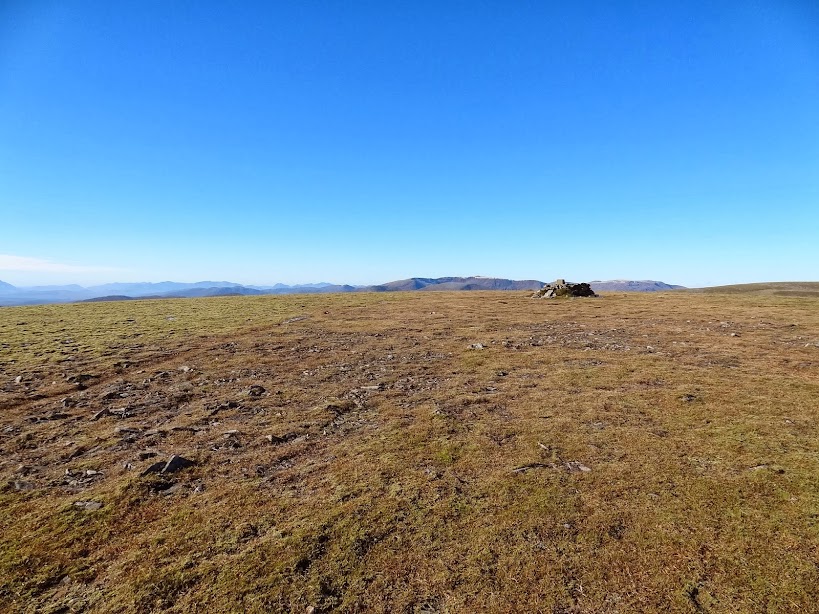 The first top comes into view 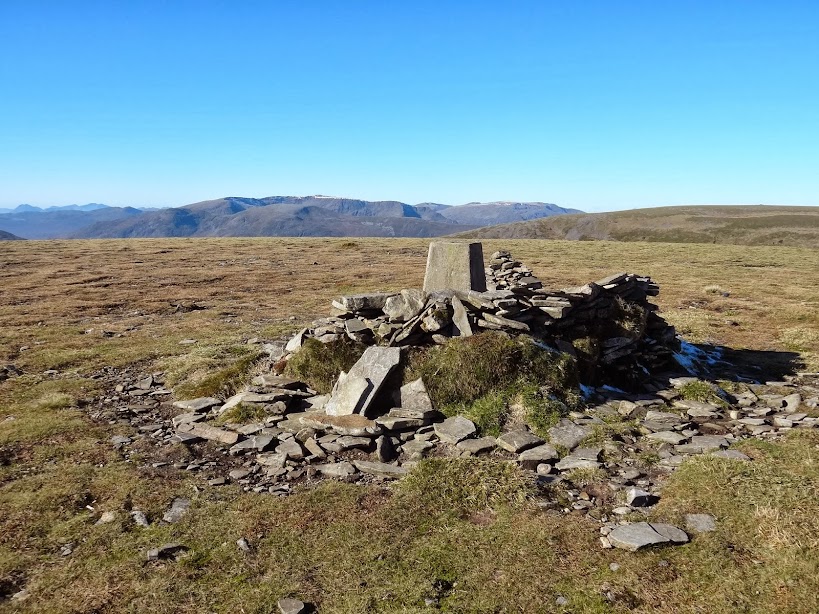 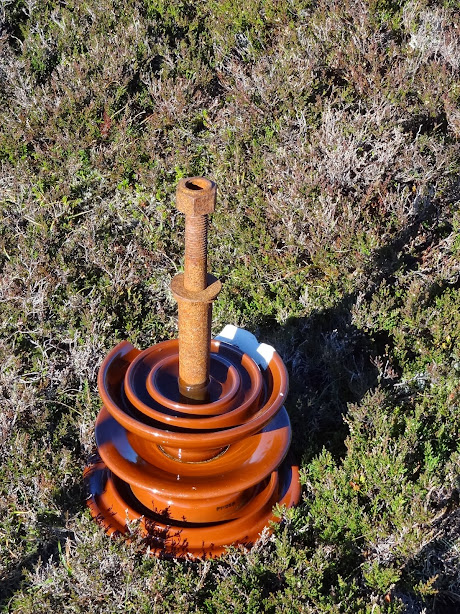 Wonder what this does up the hills? 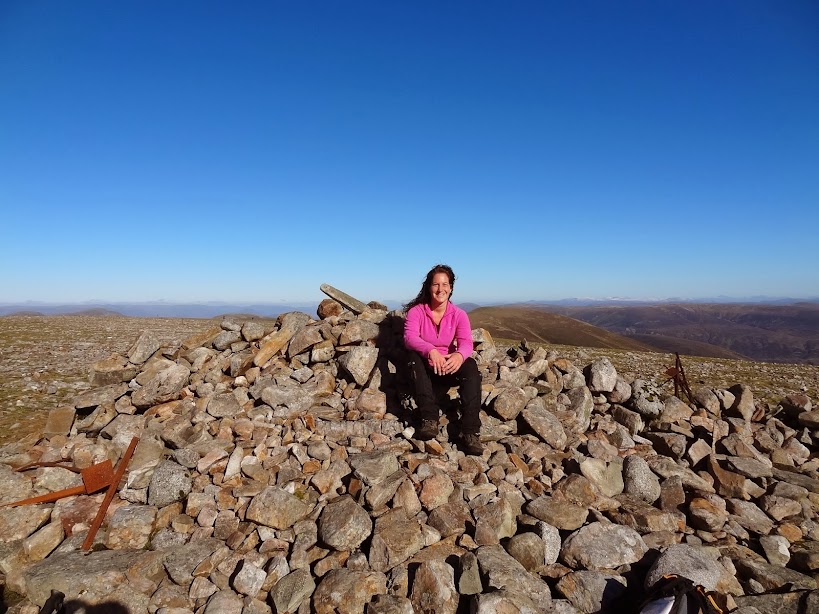 The second Munro of the day

The area is pretty uneventful on a clear sunny day and walking briskly the Disneyland of Scotland came into view.
Two other hill walkers told me that it was build by a Swiss millionaire who build the chapel specially for his daughters wedding (great dad)
The following link will give you further information about it...including the £3000 spend for roll of wallpaper and the £8000 wooden doors. 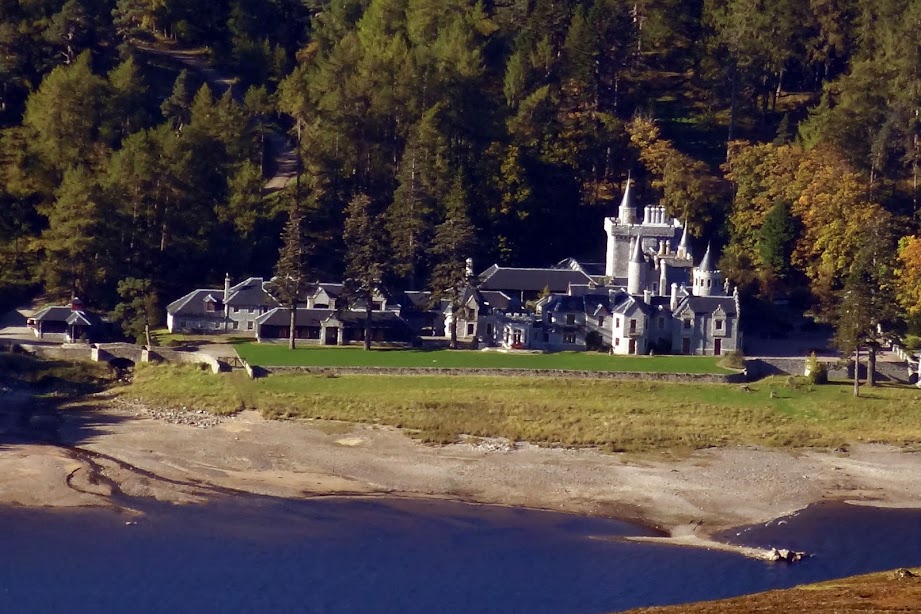 Disneyland of the north...the main building 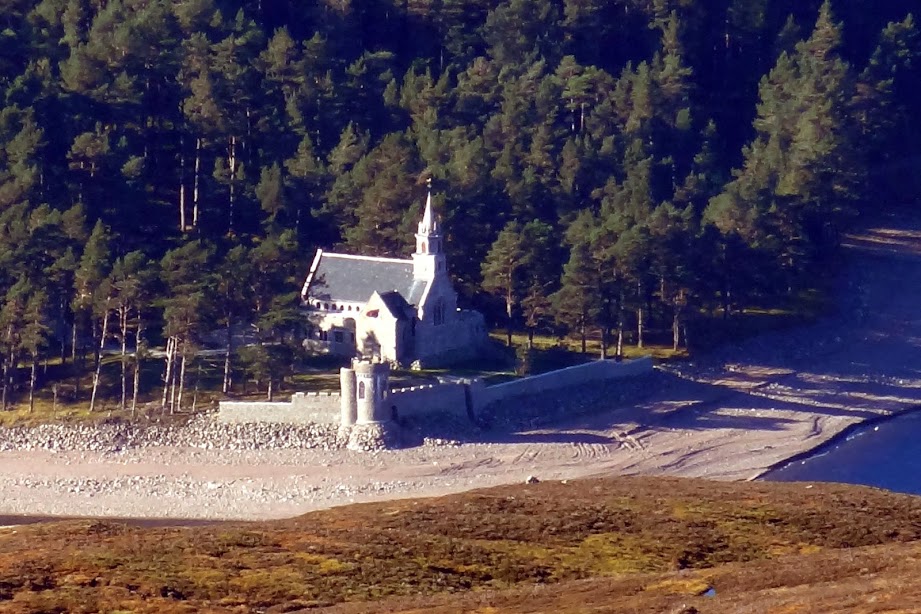 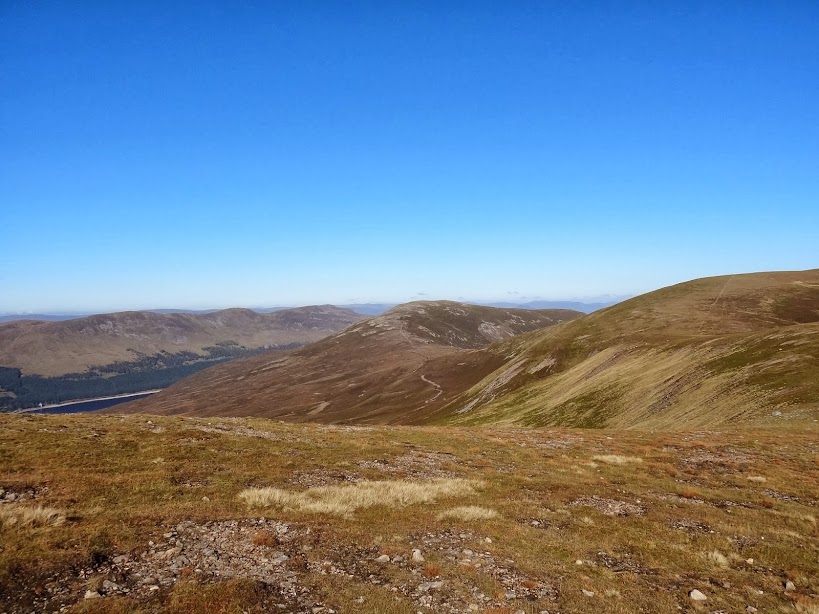 View towards the last Munro and No 141 for me 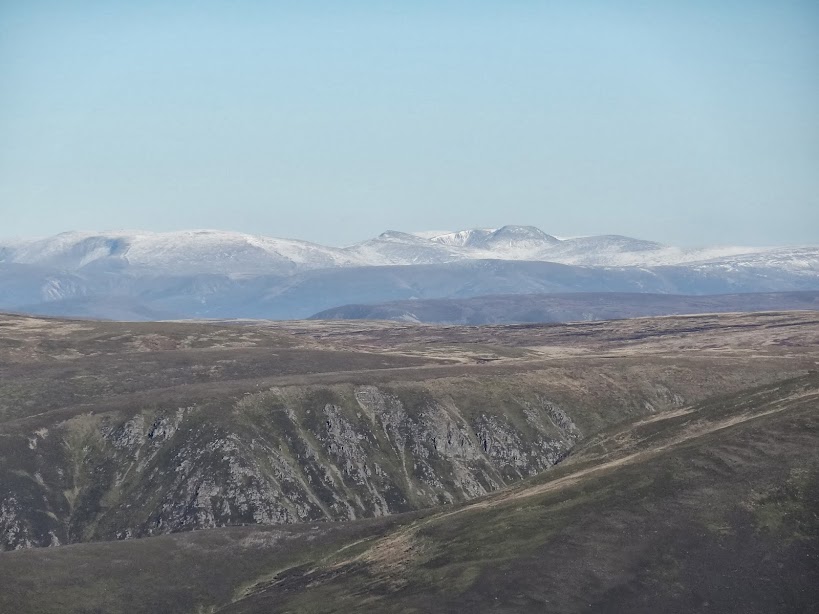 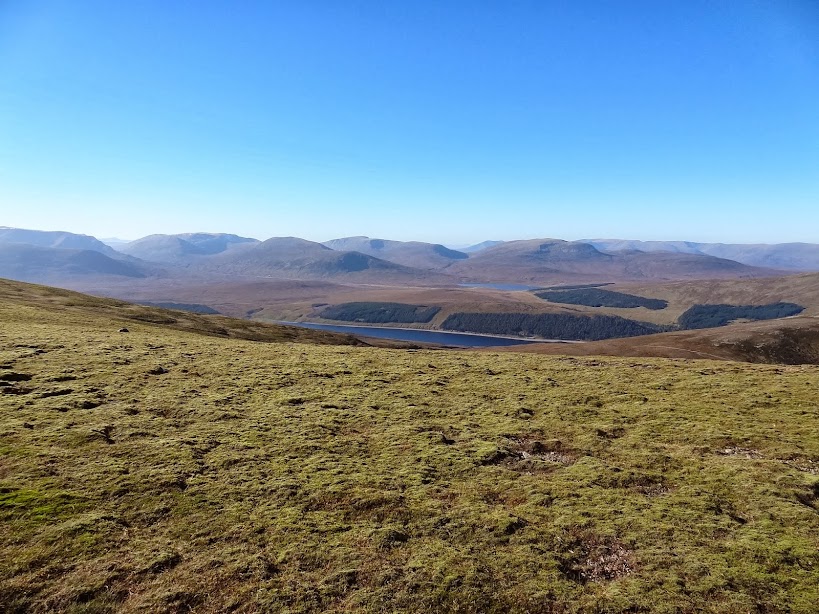 My heart nearly stopped when after the third Munro I saw a LandRover and another hill vehicle on the path below me.
Having read about stalking season and grumpy landowners lately, I really hoped that they would not prevent me climbing the final Munro of the day. Approaching the vehicles the driver of the LandRover got out of the car. Mentally preparing myself for a begging session, I watched him retrieving something from the back and sitting back down in the car. By the time I approached (a bit anxious at the time) all I got was a nod and a 'Hi'. Relieved I moved on.
It made me think why encounters of stalkers and hill walkers can not always be that friendly...after all the stags tend to stay in the quiet valleys we hill walkers hardly approach.

Climbing up Munro number 141 I felt great and climbing up the cairn I shouted out a happy ' Halfway'.

I stayed for some attempt to take some photos of myself. 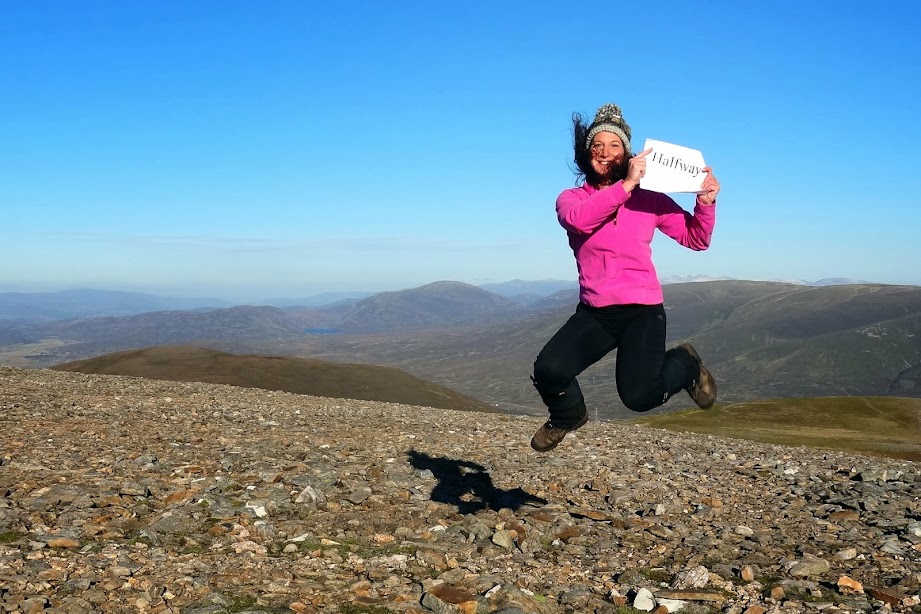 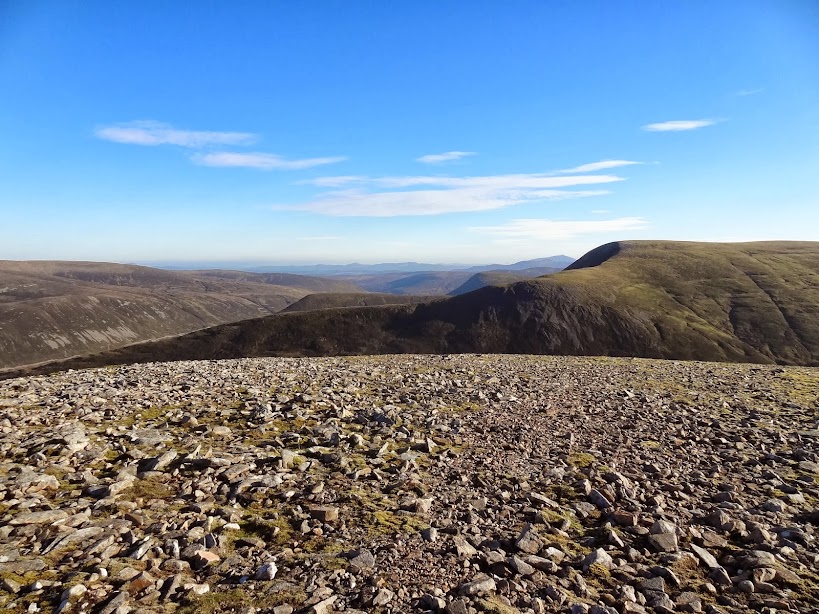 Shortly after I had left the summit I heard the sound of an engine behind me? 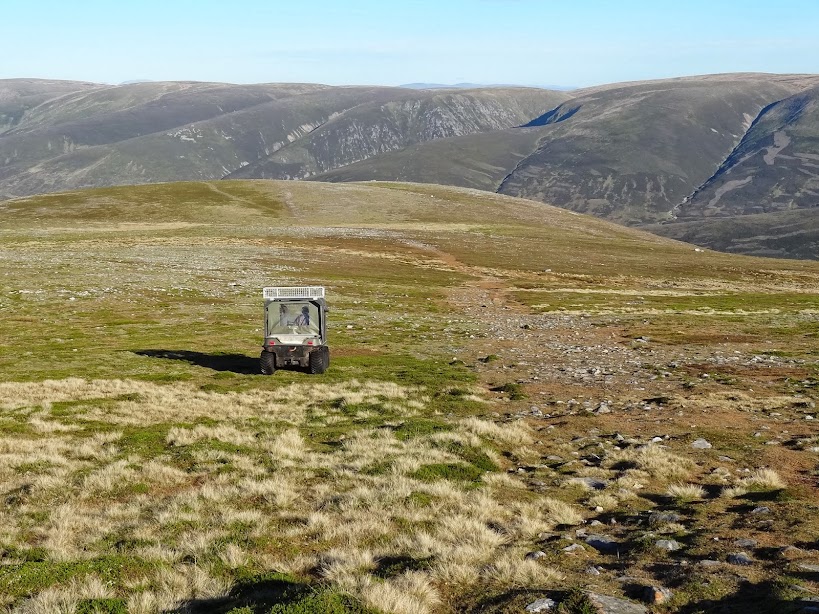 No lift down the hill

Looking around I saw the other vehicle which had stood empty next to the LandRover and two hunters inside it. The thought to stick my thumb out to get a lift down the hill was great

It was for sure the first time I saw a vehicle up a Munro! Giving the drivers a wide beam, they dared to drive past me without offering me a lift. Lol. Maybe just a s well, as it looked like a rather bouncy ride and the only space would have been in the bath like trunk in the back. Watching it making its way towards the left hand site of the hill . I continued down towards the A9. 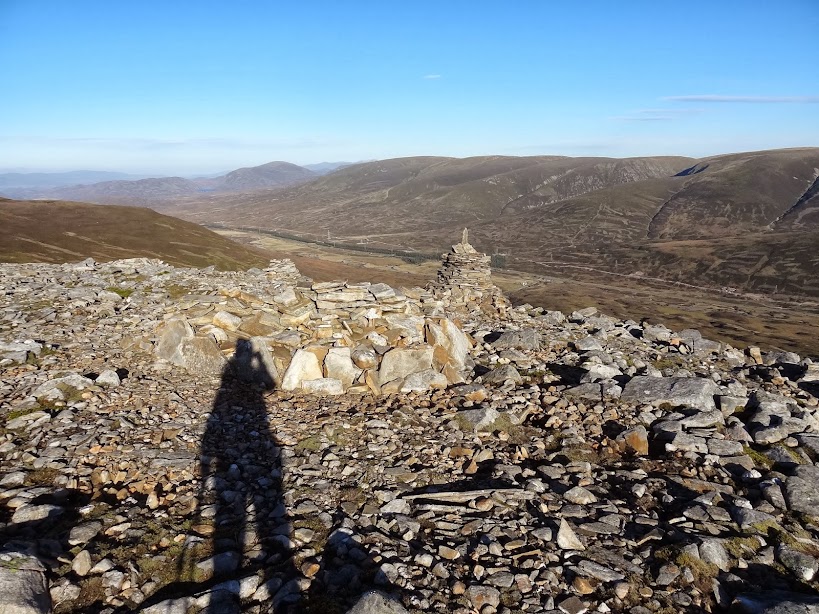 The last cairns of the day

Close to the bottom of the path I met 2 hillwalkers who kindly offered me a lift back to my car, but when we reached the bottom car park, we also met the group who I had met on the second Munro who equally offered me a lift....made me think that karma repaid itself for all the times in the past when I offered lifts to hill walkers.

Nice one: congratulations on reaching halfway!

Looks like an insulator from power lines. Dunno what it's doing up there.....

How many goes did it take to get that right???

Regarding the photo...it took 3 goes to get it done (could not believe it myself that it turned out ok with a self timer...hard enough when another person tries to capture it)

Mountainlove wrote:it took 3 goes to get it done

Come on admit it how many times did you jump in the air to get that photograph at the Halfway point?

Many Congratulations on reaching 141!

Some great photographs by the way.

Congratulations on hitting the half way point

Much maligned these hills, but I like them. Yours are some of the best photos I've seen of this area too

Yes grit for the crops of the grouse. Two different parts to the tray.....one with the medication and the other with non medicated grit. The medicated half should be blocked off at this time of year ( looks like a flat stone is used for this purpose here) when the 'little breasts' can be extracted for human consumption.....as it is with chicken.

The Rodmiester wrote:Come on admit it how many times did you jump in the air to get that photograph at the Halfway point?

Many Congratulations on reaching 141!

Some great photographs by the way.

PeteR wrote:Congratulations on hitting the half way point

Much maligned these hills, but I like them. Yours are some of the best photos I've seen of this area too

Thank you...what I like about these hills is that they are pretty easy in comparison to others . Hopefully the weather forecast will keep on doing the same...if it is in favor to us hill walkers!!

gaffr wrote:Yes grit for the crops of the grouse. Two different parts to the tray.....one with the medication and the other with non medicated grit. The medicated half should be blocked off at this time of year ( looks like a flat stone is used for this purpose here) when the 'little breasts' can be extracted for human consumption.....as it is with chicken.

I am glad now that I took a picture of it...would have never been able to get all these valuable information otherwise

Never knew they get medication (but it makes sense now why)

Great photos and what a stunning day you got

I love the pic of you jumping....it sums up how good you must have felt at reaching this fantastic milestone. We'll done

Smashing pics of a cracking day on the hills,,love the jumping pic,,,well done,

Users browsing this forum: 54kgx2, Big_Bouncer, Lucky-Luce, Owen b, past my sell by date, poolewe, Sick Kid and 62 guests