My first blog! Having been a bit of a Lake District, low level stroller, while bringing up 3 children, last year we decided it was time to complete a munro. 18 months later, 63 munros completed and a motorhome purchased, it was time to go for a big bagging weekend! Fresh food and clothes were thrown into the van, aka Bella, and 4 hours later we arrived at the Cluanie Inn carpark at 11.30pm on Friday night. The forecast was great and there would be just enough hours of daylight, or so we thought, to go for the big one. The South Glen Shiel Ridge.http://www.walkhighlands.co.uk/Forum/posting.php?mode=post&f=9#
We had a reasonable sleep, though disturbed by deer – who would have thought! What a racket all through the night! We set off at 8.30am, a little mist on the summits, but otherwise plenty of clear blue sky. We opted for the easier ascent, following the long road round to the shoulder at the end of the first munro. It was a fairly easy climb and we arrived at the top just before another couple of parties who’d taken alternative routes. 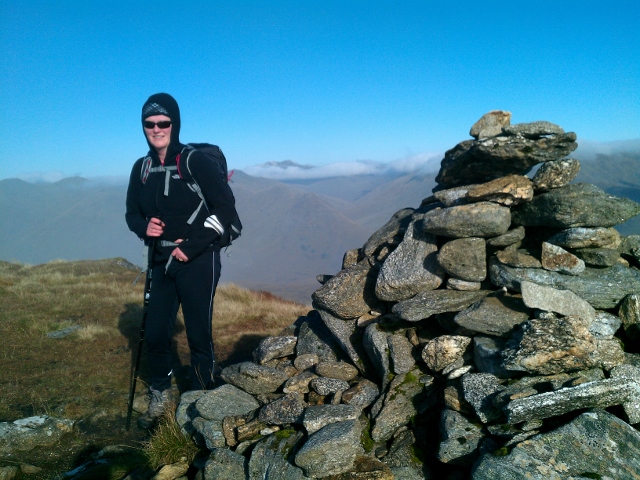 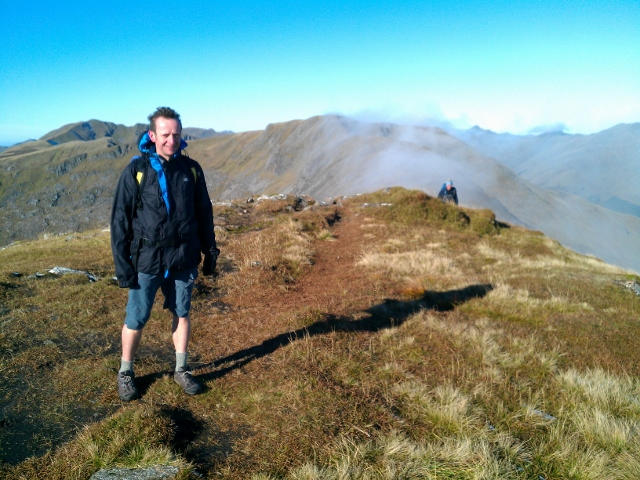 Who's that popping up in the background? Turned out to be our driver home, but more of that later..!

From here on , the cloud lifted, though not before we'd had some fun with our shadows in a broken spectre.
The views were amazing. We could see the ridge ahead, the Cluanie Inn below and even took time to turn around and see the Nevis range behind us. Later, we could see the Cuillins, living up to their description of 'black'. 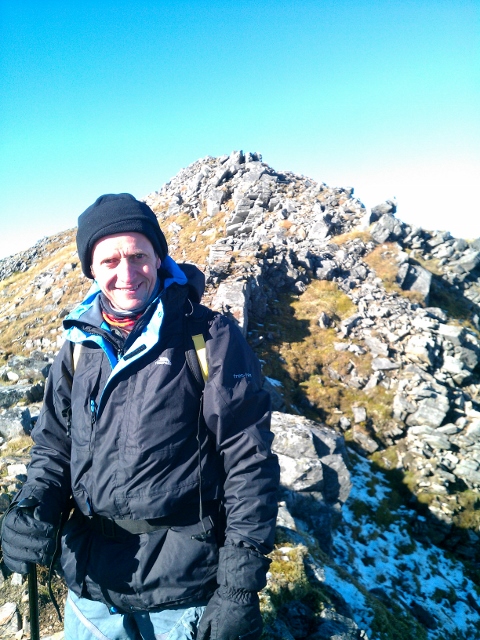 A few smatterings of snow, despite the sun.

By the time we'd got to the 4th munro we were feeling pretty pleased with ourselves. We stopped to chat to a fellow walker who turned out to be celebrating his 70th birthday by increasing his munro total to 1700. Not only that, but he told us about his friend who was just turned 85 and was going to slow down a bit, now that he'd clocked up 3000 munros! We assumed he wasn't a lift attendant at Glenshee, going up Cairnwell daily, and carried on, feeling a little less pleased with ourselves! Could we manage 2930 munros in the next 40 years??? Cheesy grins all round at completing 7 munros in one day!http://www.walkhighlands.co.uk/Forum/posting.php?mode=edit&f=9&t=37244&p=216020#
The hard work was over...wasn't it? Down we went...and then back up a rock wall. Not sure how that would have been going the other direction.
Time was beginning to get on. We normally manage the walks in the shorter time that Walkhighlands gives as a guide, but we'd rarely walked in such good weather before. Maybe we shouldn't have spent so long stopping to take photos and admire the views. Darkness was coming and we were still at 3000ft. Time to get a move on. We got to the Bealach cairn and down the very rough and slippery path before the darkness really set in. Time to get the torches out and head for the road. http://www.walkhighlands.co.uk/Forum/posting.php?mode=edit&f=9&t=37244&p=216020# We followed the path...we think...though it was very, very wet in places! Time for our mantra: Thank goodness for goretex boots! How often have we said that over the last couple of years? Now we just had to thumb a lift! Hmmm! Wet, muddy, pitch black out? How's this going to work? Luckily, there were 2 cars parked up in the layby and a set of torches following us down the hill. Sure enough, 10 minutes later and the chap who'd suddenly appeared in our first photo of the day reappeared and offered us a lift back up the road! Phew. It seemed a long drive back - very, very, very pleased to get a lift!
We'd had an epic day out and to top it off we were parked up beside a pub! Two quick showers and steak dinners later and we were able to go to the Cluanie Inn and hold our heads up high as we chatted to fellow walkers. Think we're getting the hang of this now!http://www.walkhighlands.co.uk/Forum/posting.php?mode=edit&f=9&t=37244&p=216020#

Wonder if we'll get a better sleep tonight? Anyone got a shotgun???