Ben Starav 5.gpx Open full screen  NB: Walkhighlands is not responsible for the accuracy of gpx files in users posts
So, take 2 (with boots this time), after yesterday’s minor mishap

These five had been bugging me for a while. I like to string hills together. For practical reasons: having only two weeks per year to get out into the Scottish hills, tends to make my bagging exploits efficient (bracing myself now for the comments). For lazy reasons: once you’re up high, you might as well stay high and bag some more. And last but not least for enjoyment: me likes me long days oot!

However, trip reports of other, faster walking WalkHighlanders were a testimony of how long a day it would actually be. So in the past few months the plans had been changing from a one day trip, to an overnighter, to a two day trip and back and forth again.

I really shouldn’t have bothered with the dithering. I knew all along that I really wanted to do them in one day. Anyway, there would be plenty of opportunities to cut the day short and get off the hill if necessary, without the need of a long detour back to the car. So with enough calories and fluids packed for a loooooong day I parked up near Colleitir in Glen Etive at 6.30am, where I was greeted by Mr. Handsome, who quickly lost interest and continued eating. Stag at the start

From the road a good track goes across the river Etive, through a nice wood with bluebells, to just before the cottage, where there is a diversion. Thanks to the recent dry spell it wasn’t too boggy. 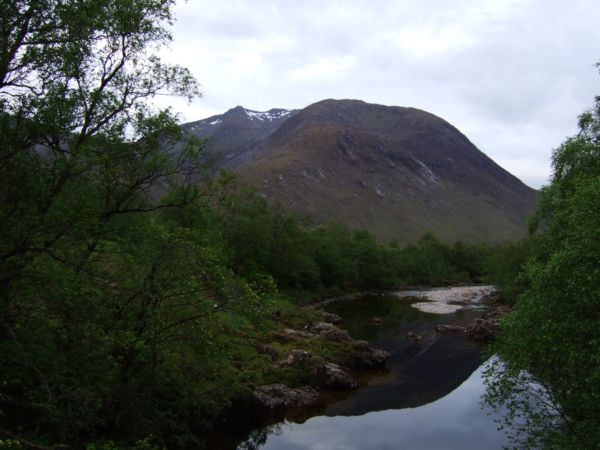 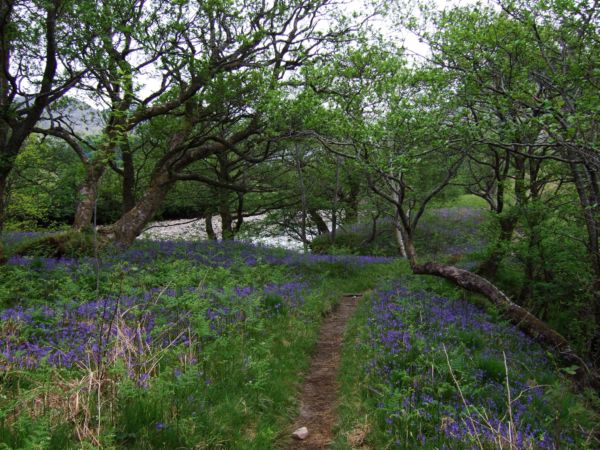 Once back on the track there is more foliage along the way making the going very pleasant. From the bridge over the Allt nam Meirleach, the massive bulk of Ben Starav looms up long and steeply. Someone’s showing who’s the boss! To start with the path is very rough but it improves higher up. Head down and get on with it! Near Coire da Choimhid the views opened up and the hills started poking their heads up. 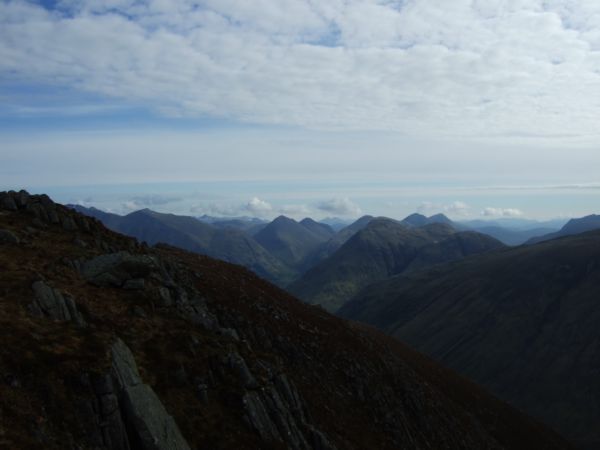 Views to the southwest opening up 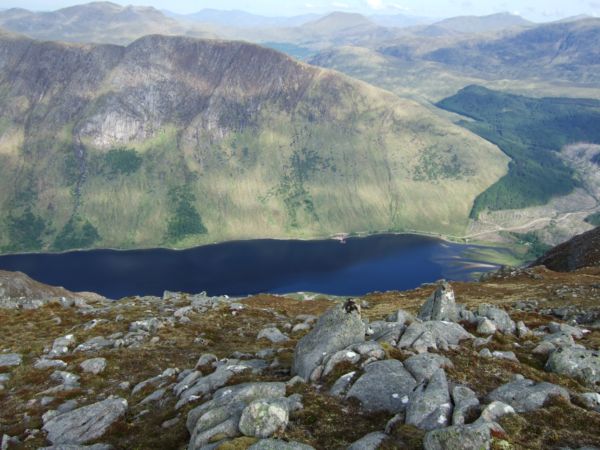 From 850m upwards I really started enjoying the climb. The ridge got steeper, rockier and narrower, offering a welcome change from the plodding. There were good views all round. The corrie in between Ben Starav and Stob Coire Dheirg looked impressive.
Finally the summit came in sight! 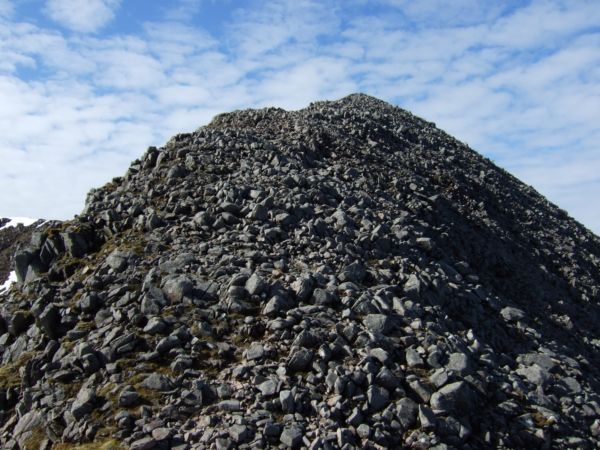 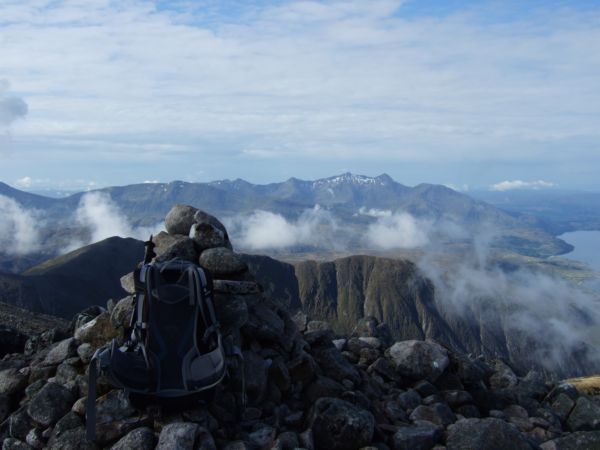 It was 9:45hrs when I got to the summit. A few wispy clouds were drifting up. The sun was out and the air was nice and crisp. My kind of morning! 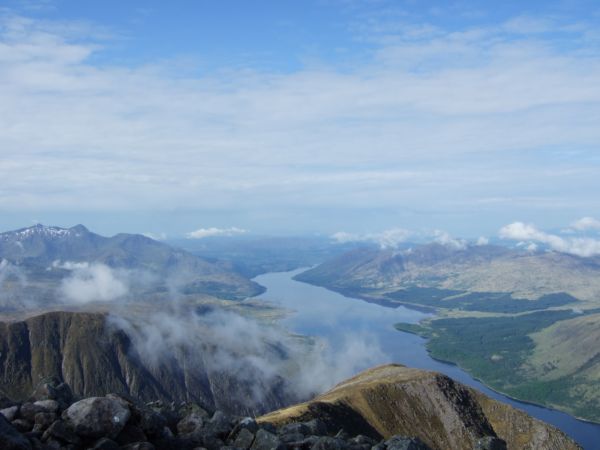 Onwards to Stob Coire Dheirg along the bypass path. In hindsight I think I would have preferred to stick to the ridge as I lost the path and spent quite a bit of time awkwardly traversing the boulder littered slope. 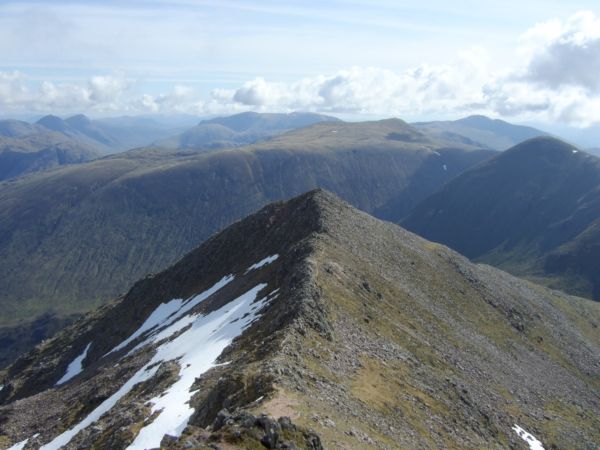 Anyhow, I managed and got to where a path branches off to Beinn nan Aighenan, my next target. Looking close-by and being close-by are two entirely different things, as I was about to discover…. Moving at a decent pace, but seemingly not covering any distance.
Ben Starav was looking very fine from the bealach and the wide open views towards Ben Cruachan were stunning. 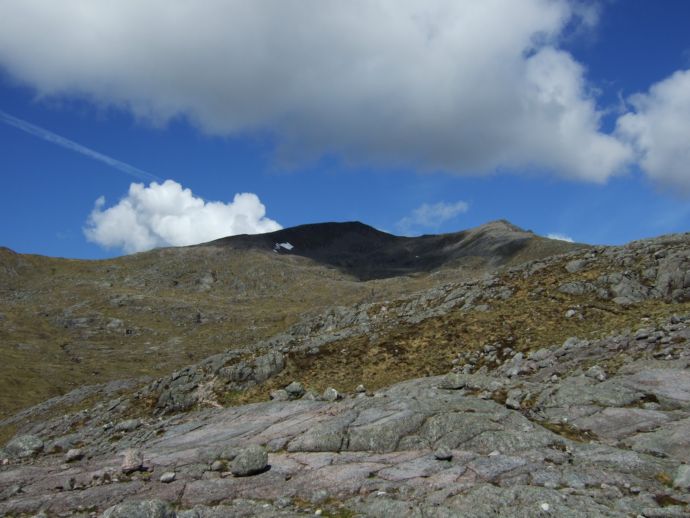 Ben Starav getting some shade 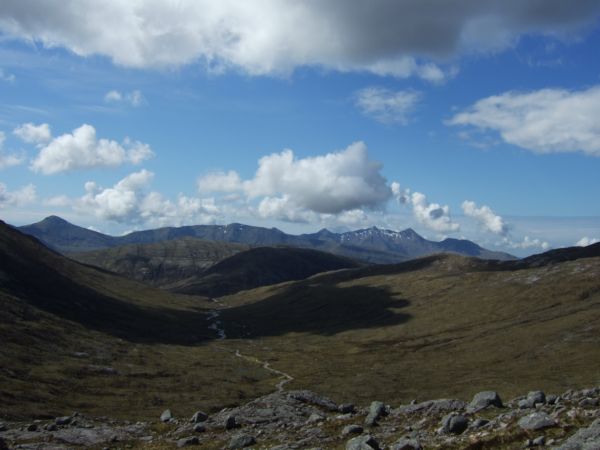 From the bealach it was an hour to the summit of Beinn nan Aighenan. Doing the maths confirmed that indeed today would be a long day. 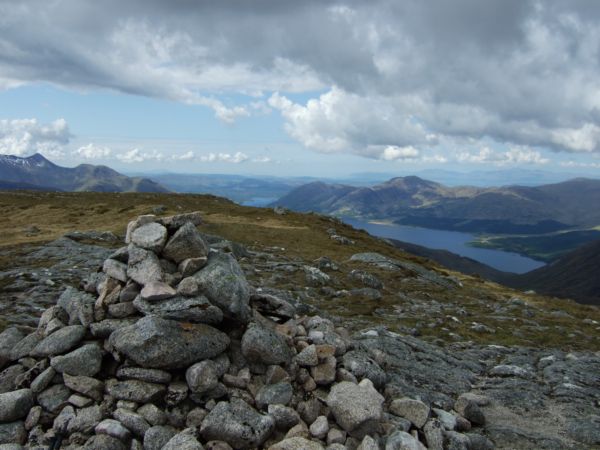 Interestingly the way back to the bealach and up the ridge towards Glas Bheinn Mhor went quicker than expected. Once back on the ridge it was easy walking to the next munro. In the distance ahead I spotted another walker. I wondered what their bagging plans for the day were. 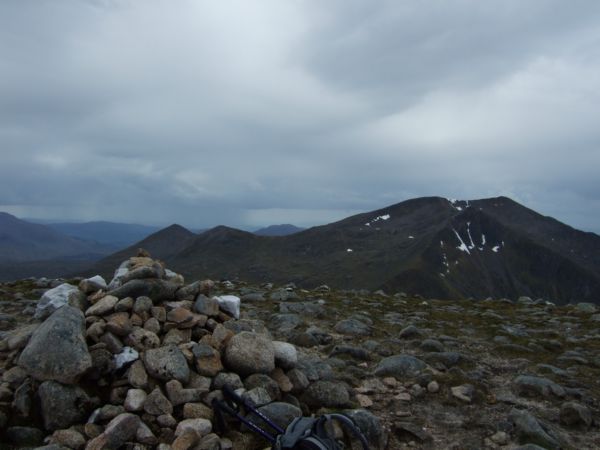 The weather was getting a bit darker, adding to the sense of loneliness on the hill. The other walker was now nearing the next bealach. What would they do? Continue to Stob Coir an Albannaich? No they went down the Learg Mheuran. Definitely on my own now.
The first part of the descent is easy. Then the ridge steepens, narrows and becomes very stony. Perhaps not straightforward, but at least there were no worries about sliding downhill. Unlike the head on ascent up the smooth dolphin-back ridge of Stob Coir an Albannaich. 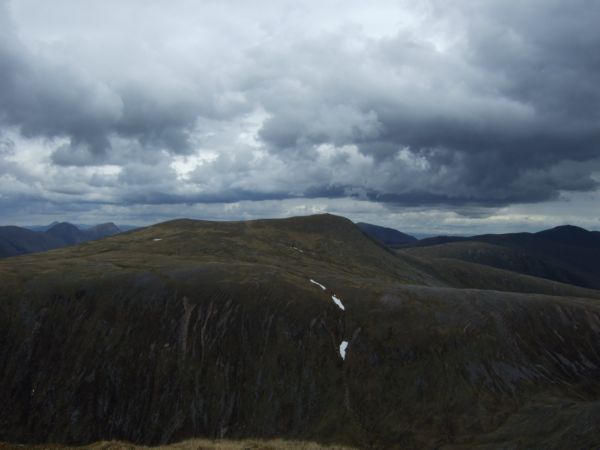 I could just about make out a zigzagging path, going up from the bealach, but it was still steep and very gravelly. Summit number 4 was pocketed at 4.00pm. Excellent going! The legs were feeling OK and plenty of daylight left for Meall nan Eun! 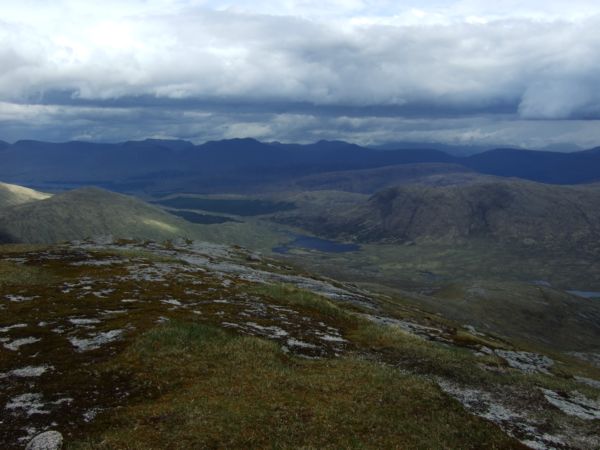 With the weather not looking that great in the distance, I made a move on down the east ridge. The point where to leave the ridge and go down the rake was easily spotted. In mist this may be a different story. Looking down to the bealach at point 754

Some very steep bits there, but lots of rocky steps made it very much doable. It looked very desolate on the bealach with its tiny lochans, helped by some dark clouds rolling in. Better get on with it. The walk to Meall nan Eun over to Beinn Tarsuinn was straightforward and soon I was on the summit. Hurrah all 5 done! 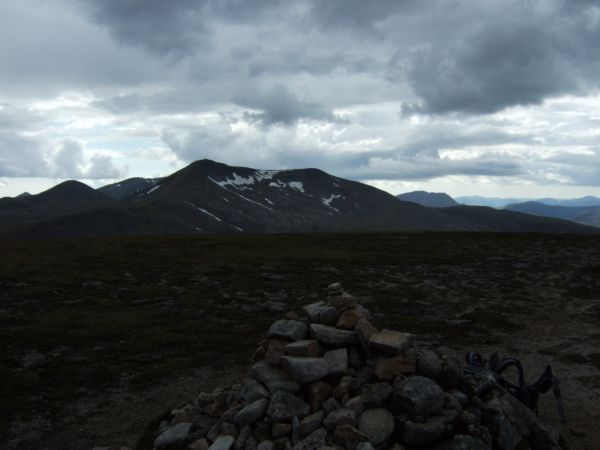 It had now started raining. The wind and moody clouds definitely added to the atmosphere. Where it not that I was getting cold, I probably would have stayed a bit longer to enjoy the melancholic scenery. As it was, I wanted to get off the hill and out of the wind. Taking a NE bearing I made quick work of the first flattish section of the ridge. Further on a bit more thought had to go into finding a suitable route down avoiding the crags and some wildlife.

In the space of half an hour the weather had changed again: the sun was back and I was roasting. The way ahead was very obvious, but my did it take long to get off the hill and down into the glen. 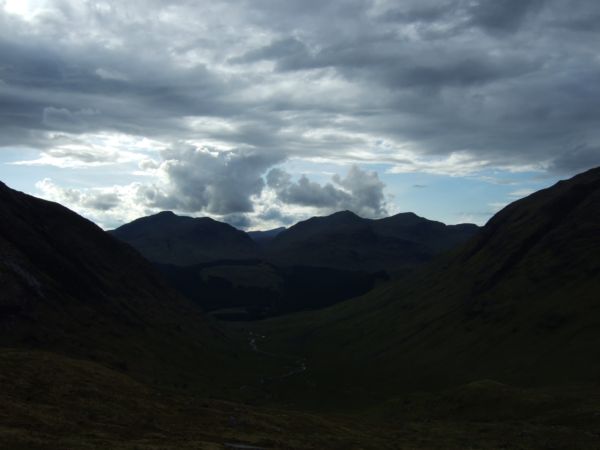 It looks so close!

As this is farming ground I expected the terrain to be very rough going, with lots of mud and cattle trampled surfaces. But it was OK.
The views back to the sunlit glen were great. Ahead it still looked a bit dark. 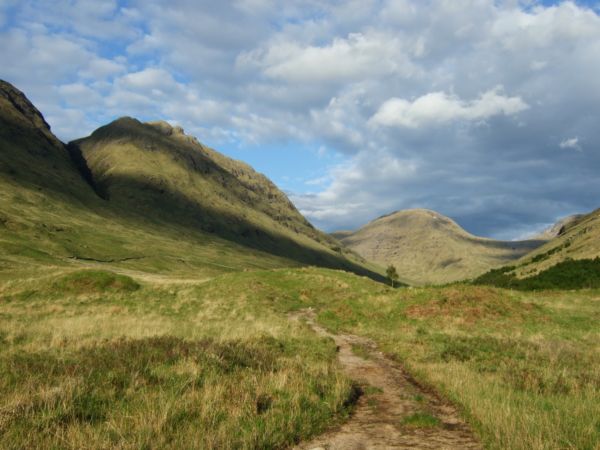 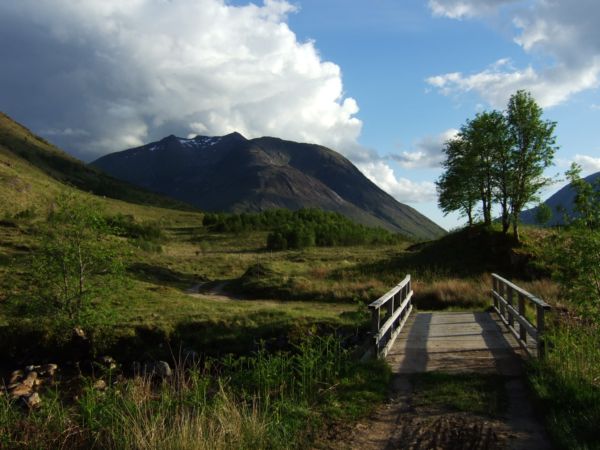 The final walk back to the car was enchanting. The sun was out, the birds were twittering, Ben Starav looked good, lots of bluebells. 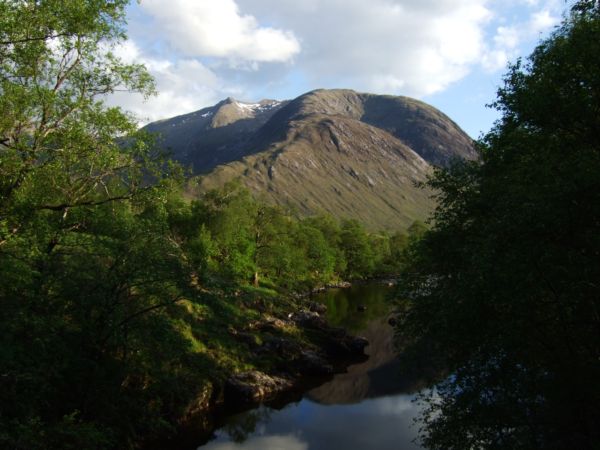 One last look at Ben Starav

Three trips for me

My word, that's impressive! I just about managed the first three in a long day, and I thought I was doing OK by my standards... Lovely pics too

. They are all great hills, these Glen Etive Munros

Thank you both for the comments

They are majestic hills, I think I'll return!