The first day of our week's holiday in Lochcarron and I was raring to get into the hills. My two main goals for this week were Liathach and Maoile Lunndaidh, the two remaining Munros for me in this area (apart from Lurg Mor and Bidean a Choire Sheasgaich which I was planning to leave for a long summer day next year). The only trouble was, The Bruce was knackered after a week doing landscaping work in our garden, and only wanted to laze around: "It's a holiday!" he cried. ** marital strife alert**

After some 'discussion' it was decided that we would drive up to Craig with our bikes. I would head over to Maoile Lunndaidh while he cycled around the Caledonian pinewoods for an hour then caught the train to Kyle of Lochalsh for the day - railway enthusiast that he is. We would rendezvous late afternoon at the car. What could possibly go wrong??
I set off at 9.45 in bright sunshine and the cycle in from Craig was as lovely as I remembered - here's a photo from our trip last year to give some idea: 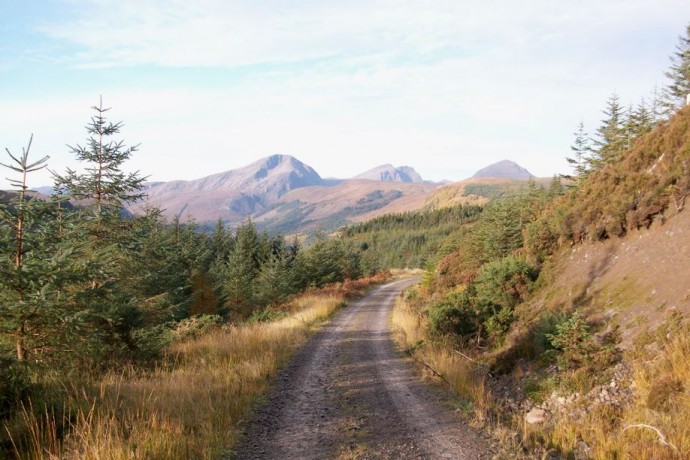 Route from Craig looking back to Achnashellach mountains

It was fairly steep (the only way to get up this slope is to anticipate the return trip - yee ha!), and a bit bumpier than I remembered, but I got to the patch of forestry near Glenuaig lodge at around 11am. (map below starts/finishes from where I left my bike).

our_route.gpx Open full screen  NB: Walkhighlands is not responsible for the accuracy of gpx files in users posts
With a herd of cattle gathered around the lodge, I didn't want to leave my bike there as planned so I left it by the woodland and after another 200m on the road I turned right and headed across the bog to climb up the steep heathery slopes of Carn nam Fiaclan. Luckily it wasn't too wet underfoot and the rivers were easily crossed. Unfortunately, however, by this time the lovely sunny morning had gone and cloud was lowering on the bulk of Maoile Lunndaidh. It was down to about 500m and all looked a bit threatening, so I ended up slogging up the mountain without getting the compensatory views. Not so much fun, but at least height was gained quickly.

I was actually a bit nervous - I'm not one for solo Munro-bagging and these are pretty remote hills really. Would I manage to navigate in the mist? I had read that Maoile Lunndaidh's summit is a flat plateau and the cairn can be hard to find. Gulp!

I stuck close to the edge of the Fuar-toll Mor corrie to help find my way as I went upwards and soon the slope was levelling out. Weirdly, for a moment the sky above me cleared even though there was cloud all around, a strange sort of inversion, and I saw the summit cairn of Carn nam Fiaclan 100m off to my right so headed over there. It was around 1pm, I sent a text to The Bruce to update him, and had a quick sandwich. So far, so good. I then had to go 700m to a narrow neck of land between the Fuar-toll Mor corrie I'd been walking alongside uphill (or at least I'd been walking beside a swirling mass of cloud in an abyss beside me!) and another corrie, Toll a'Choin, which led in the opposite direction down towards Loch Monar. I needed to get to that narrow neck in order to take a bearing to Maoile Lunndaidh's summit, another 500m further on. There was a thick wall of cloud starting just beyond the cairn where I was, so I took a bearing and headed into it. This was my big mistake. I should have returned from the summit cairn to the edge of the Fuar-toll Mor corrie and taken a bearing from there - 700m is a long way to walk on a bearing when you're in a bubble of thick white clag with soft green, mossy ground underfoot - no distinguishing features at all. After a while, I felt I'd been walking long enough and should have come to the neck of land by now. Strange. Suddenly I found a corrie's edge on my left. Hoorah! I must have come up to Fuar-toll Mor corrie and now I just needed to follow it for a short distance and I'd be in the right place. I carried on walking. The ground seemed to be going downhill. Well, that's OK, mountains aren't exactly flat and mist's a bit disorienating so I wasn't too worried - until it really started going downhill. That wasn't supposed to happen. Help! Where on earth was I?

I sat down, took some deep breaths and got the map out. Remembered my long-distant Glenmore Lodge training course and checked the aspect of slope. Somehow I was going due SE instead of SSE. I realised I was heading down beside Toll a'Choin, following the WRONG CORRIE EDGE and would be at Loch Monar if I didn't turn round! Yikes! I must have been slightly bearing too far to the south and when I saw the edge of a corrie I had jumped to the wrong conclusion. I worked out that if I followed this corrie's edge uphill, it should take me to exactly the neck of land I was looking for, right? Off I went for another 5 minutes and, thank goodness, there was a small cairn marking the spot. The relief!

Heart pumping somewhat, I made myself sit down, eat another sandwich and a chocolate bar in the thick clag. I now had to go for another 500m through this mist across the flat summit plateau to Maoile Lunndaidh. Careful lining up of map, setting the compass, checking the time and off I go - compass brandished in front of me. Amazingly, after 5 minutes, two guys loomed up out of the mist, walking in the opposite direction. Great to see them and we had a brief chat. They assured me the summit wasn't far away and I was SOOO relieved when the cairn came into view. It was now 2pm. Quick text to The Bruce and I was outta there, heading swiftly downhill. By 800m I could see a bit more around me and picked up a sketchy track which then turned into a really good path all the way down the mountain past some lovely waterfalls. The sun even came out a bit under the cloud! Sun emerging from cloud above Glenuaig

Below the waterfalls I followed the burn then crossed over and made a beeline for Glenuaig lodge where I had a look back at the way I'd ascended the mountain. The cloud was a fair bit higher than earlier but that ascent looked as steep as ever! Checked out the little bothy next to the lodge (electric heater!!) then managed to find my bike by 4pm, enjoyed the downhill and got back to the car 4.45, 7 hours in all. Amazingly, The Bruce was sitting in the car reading the Sunday Herald, all had gone to plan. He'd had a lovely sunny day in Kyle so he'd had a great time and I guess I had too. A learning experience, and I think I feel a bit more confident about my abilities to get myself out of a potentially difficult situation.

I have to admit, my thoughts on the way home were: "I wonder if he'll be feeling up to Liathach tomorrow ...?"

Really enjoyed your report and photos. Great the way you recovered from your 'mis-step' - I'm signed up for the SMC navigation course in just over a week. Hope I'll gain the confidence you had as I always walk the hills alone!

Thanks RTC - hope you get a better day than I did. The views from Sgurr a'Chaorachain and Sgurr Choinnich next to Maoile Lunndaidh are stunning so I'm sure ML is the same in clear weather.

And thanks AnnieMacD - good luck on your course! It's good to have those skills even if you don't get to use them too often. Mind you, it's one thing knowing what to do and quite another thing actually doing it in the middle of a howling gale when the map is flying around and getting wet and your fingers are freezing to death! The guys I met near the summit had got a GPS, which could be quite handy back up in thick mist.