First Munro ever and what fun it was. Cloudy day in the highlands, with a lot of snow. Made my way up from Invergeldie up to the dam where I decided to explore off to the left...it was marked on the map!! What a mistake, within a few hundred metres I was stuck in drifts of deep snow and bog, but I pressed on, having made it this far in about 40 mins, I thought I was making time. I was disturbing many wild rabbits and eventually, the deer. I stared out toward Creag Tharsuinn and saw about 30-40 deer on the rocks running up and down the crags staring at me. It was truely an amazing sight, all thoughts of being stuck in drifts in the middle of nowhere vanished quickly. What a spectacle of nature to behold. After feeling unwanted in their land I pressed on making it to the bottom of the hill about an hour later. I then started up the track towards the bealach where I walked straight up the hill. The clouds lifted and the views out toward the West were great. Not too sure of what hills they were, but what a sight to behold! A few metres further near the top and the wild hares appeared, having a white coat looking very cold! Once at the top, it was a matter of following the fence to the summit, when it clouded over. The cloud level dropped to 800m just as I reached the top. Sod's law! I quickly made my way down, going the traditional route! Reached the bottom at around 1400.

I tried again the following day with a mate when a blizzard closed in, giving pure white out conditions. With visibility to 2 metres or less we had no idea where we were and turned around havign gone far enough to around 700m, just shy of the bealach. The pictures below are a combination of both days, although the majority were the first.

A truely great experience on what has been dubbed Scotlands most boring Munro! The Deer at the top of the crag 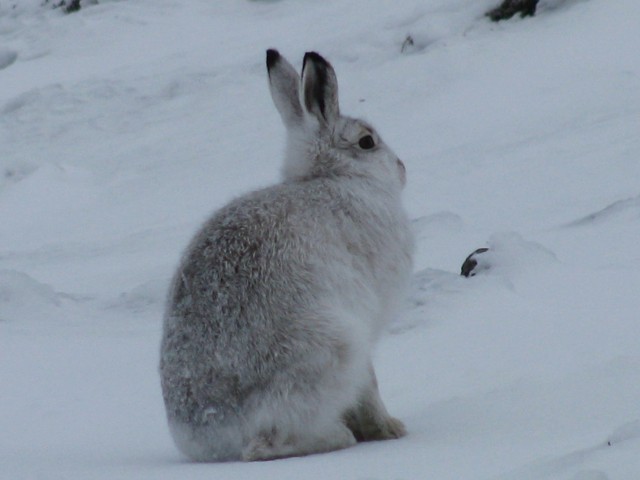 View out to the West View to the Summit Back down into the glen

Nice pics - love the hare! and the deer are good pics too... I didn't find Chonzie boring at all (I did it from Glen Turret) - I thought it was very pleasant...

This could be the first of many.....I don't think that you will find any hill journey boring ...there is always something happening the upland areas. Look how many wild creatures that you came across. Looked like a good day out and from an unusual approach. On my first visit, when I was at school, we plodded up Glen Turret, no dam in those days and no road. The weather turned very wet so we dropped down into Glen Almond on the Northside and camped there for the night hoping for a summit visit the next day.....ended up walking out down the glen in even wetter conditions then hitched back to Crieff. It was maybe twenty or so years before I got back to this area.

I have great memories of Ben Chonzie, it's a fantastic lump. All the people who say there are millions of hare up there arna exaggerating, it's infested with the tasty little buggers

If I am ever in the area again, might do it from Glen Turret, it sounds a little bit more interesting than the track up.