A Wet Carn a' Mhaim

A Wet Carn a' Mhaim


We started our wet walk from the Linn of Dee car park (063898). It was my first time into the Cairngorms from here. It can always be a tad confusing when folks try to be helpful, and provide a sign "Path to Glen Lui" at a T-junction but doesn't indicate which path to take

...Never trust a sign in a carpark, i've learnt this from experience....puts you into a false sense of security

Luckily a couple of the group had been there before, and after some head scratching and ...what can be said as soul searching....we went right (north to those with the compasses out already!) A pleasant track leads through an old Tolkienesque wood which was full of mushrooms and lichens on the barks of the trees. Unfortunately it was chucking it down so much, I couldn't get a photo. Coming out of the wood after 10 mins the track again has a t-junction. Going left (north ) takes you on the track to Derry Lodge. Again the track takes you through some stunning wooded Scots Pine scenery. This old tree was an example again adding to the Tolkienesque theme..... The track eventually takes you to the River Lui, with a large bridge. Head left (north) to continue to Derry Lodge.

The weather was pretty miserable, and the forecast wasnt too hot. After about an hour we got to Derry lodge which would make a fine highland residence if I were to become a millionaire! I wonder if anyone had any plans to do it up? Dunno... After getting our bearings we found the other bridge taking us over the river heading in a westerly direction. A decent track continues on for some time following the Luibeg burn on the northern shore. The track then crossed the river. We looked at it seeing the path on the other side, and looked again.....it was too deep and too fast flowing to cross.....again a quick look on the map shows a footbridge (Luibeg Bridge) 300m north further up the burn (013943). 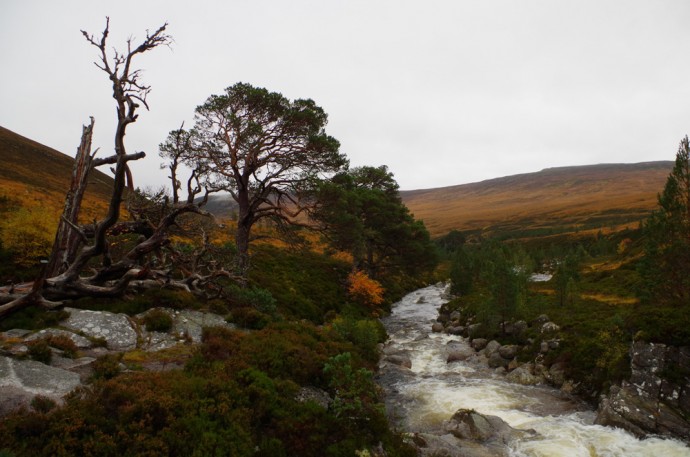 The path led back on the main path again, and started climbing slowly. A good track follows the ridge line up Carn a' Mhaim and takes you to the summit. We reckoned around 3 hrs to get to the summit from the Linn of Dee carpark. Climbing up the ridge path

No views unfortunately after 600m... Getting near the top We pootered further along the ridge for a bit, which must be quite a view (when you get one) and realized that we didnt want to make a big day of it given the conditions, and instead of traversing round to Derry Cairngorm, we returned home the same route. Descent back down to Glen Lui

25km in all, in around 7hrs....The alternative is to leave your bikes at Derry Lodge which would shorten the long walkin. Still a nice walk!

Our experience of this hill was similar but being fools we carried on to bag Ben Macdui and Derry Cairngorm - I swear the big grey man followed us all day. http://www.walkhighlands.co.uk/Forum/viewtopic.php?f=9&t=15864

SMRussell wrote:Shame you didn't get the views but hey the clag adds atmosphere

I had exactly the same thought

We did this route three weeks ago and luckily got a clag-free summit. The view across the glen to Devil's Point is something to remember! 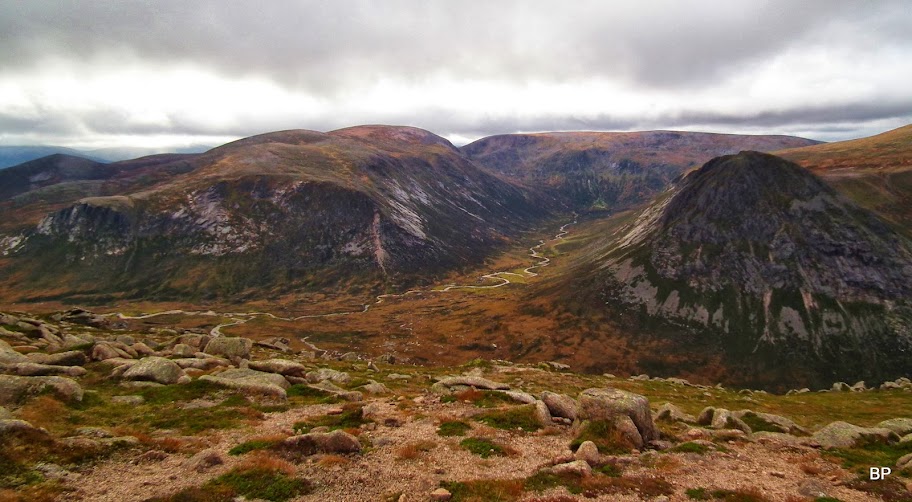 The Big Grey Man is hiding out there somewhere