meall ghaordiadh.gpx Open full screen  NB: Walkhighlands is not responsible for the accuracy of gpx files in users posts
Decided on a big day for our first trip in recent weeks. Weather forecast was looking promising so we decided on Meall Ghaordaidh up Glen Lochay (most people recommend this for a winter outing) and later in the day planned on doing the Tarmachan ridge ….. again.

Alarm set for 4am we were left Brechin by 4.45 a bit of a record for us, and by 7am on the dot we were making our first steps up Meall Ghaordaidh. All indications were good weather wise and the sun was making a on off appearance every now and then, but by the time we reached 700m/ 750m the mist had came in very thick and unfortunately views were non existent. From 750m to the summit visibility was really poor ended up walking on the compass N W until the summit was reached. Spent all of a couple mins up there before heading down the way we had come managing a few bum slides on the way down.

One reaching about 850m mark the sun was out and the temp was up, looked like all those lucky people heading up would be getting the best of the weather. Still my fingers and toes were X that our luck would change on the Tarmachan ridge. 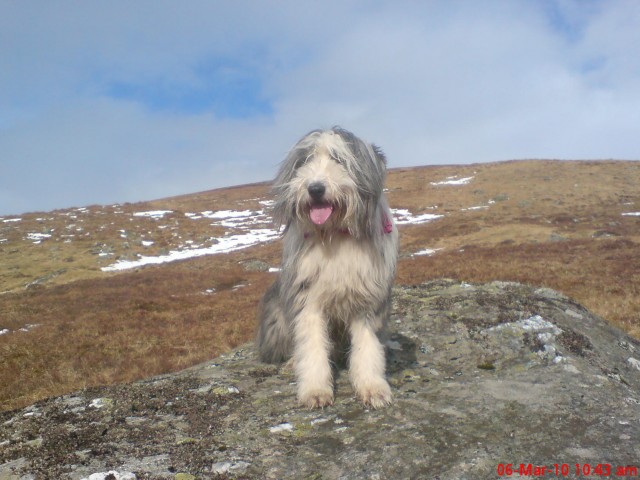 the ridge.gpx Open full screen  NB: Walkhighlands is not responsible for the accuracy of gpx files in users posts
Finished our lunch at Glen Lochay and its time to head for the Lawers Visitor centre. Still loads of snow on this road, there was no way we were getting the car near the start point just south of the loch, we ended up having to park about ½ km south of the centre. 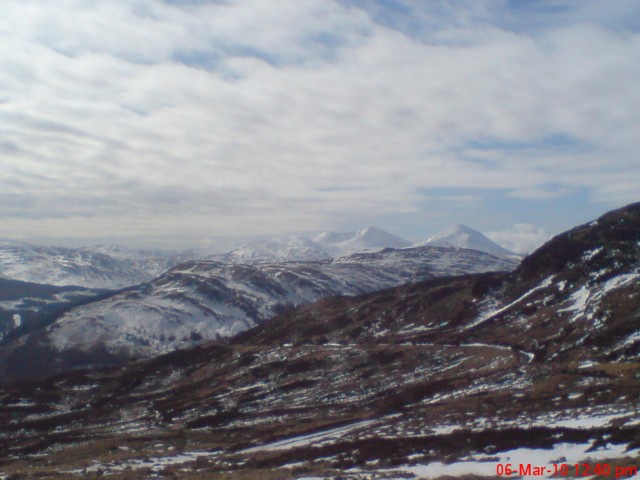 Anyway soon we are ready and bang on noon we are on our way Again I decide to head right along the track towards the old quarry and climb through the breaks in the crags to reach Beinn nan Eachan our first top of the ridge.

The track was holding plenty drifted snow that was very wet making for a slightly tough walk, once we reached about 850m we decided on using the crampons. Met 2 groups as they were descending Beinn nan Eachan they claimed they had a fantastic time on the ridge with beautiful views. 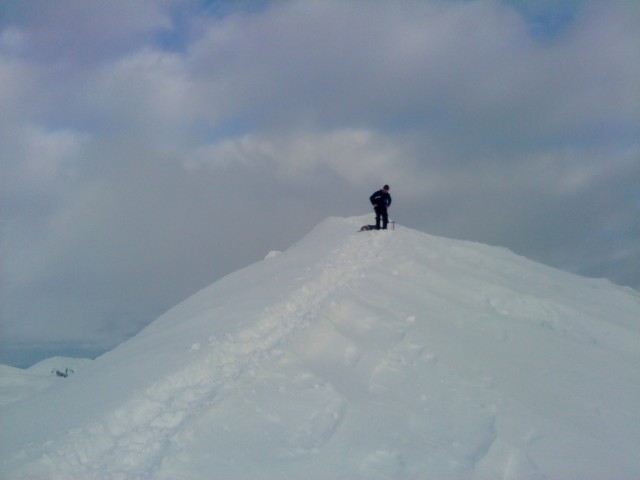 We descend Beinn nan Eachan as best we can with more lessons in sledging. Now we are heading for Meall Garbhs N W side and make our way back to the ridge. Plenty care was needed here especially the narrow area near the summit, then it was a case of climbing the frosty knoll to its peak. Just a word on the N W face of Meall Garbh this was pretty tough snow/ice all the way to the ridge so we really did have to kick the spikes in . I really think I will have to sharpen the spikes on my old salewa’s………

The climb to Meall Nan Tarmachan seemed a little easier thankfully. I was pretty much pooped by this time, but the wife she had seemed to find her second wind and was putting me to shame. Arrrrr

Got a few pics then had to get going as time was getting on, we soon left the summit and instead of heading for the 923 spot height we descend mainly by our bums yet again between Gam Chreag and the 923 spot and carried on south below the ridge before heading east to meet up with the track. 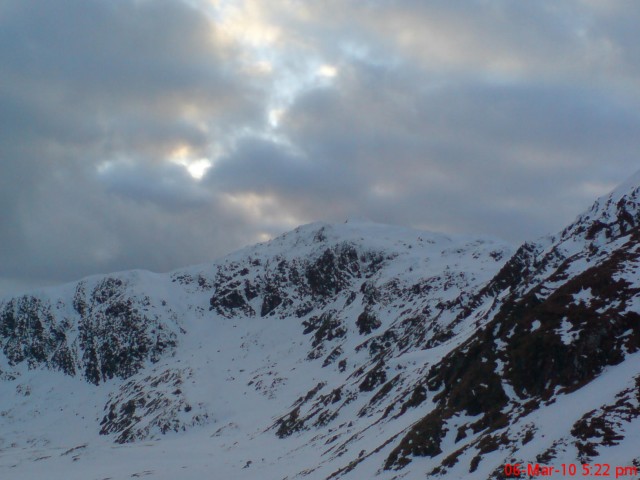 Due to the snow, and not reaching the preferred start position this route was about 3km longer than we hoped………………. Fantastic day though.

David,
Thanks for the comments on the pics. Its only an old sony mobile phone i use....... Hopefully treat my self when funds become available.

As for the legs, well i dont know if they are sore or not...... have not felt them since i woke up in the morning.

Well done Dave, wife and wee doggie. You certainly like to test yourself

Looks like you had some nice weather in the end. Lovely pictures

Quite some effort that. I have planned this sort of double walk thing a few times, but once I am back at the car, I can never be bothered doing the second walk!

Good photos, particuarly from the Tarmachan ridge. The ultimate challenge would have been to do Beinn nan Oighreag and join the two walks together, although I can't work out if that would have made the day longer or shorter.

monty wrote:Well done Dave, wife and wee doggie. You certainly like to test yourself Looks like you had some nice weather in the end. Lovely pictures

Thanks Monty
Had a word with you recently about your route up Meall Ggaordiadh. Time was spot on we also completed it in 4 hrs. Glad we managed the ridge as the weather was much better in the afternoon.

malky_c wrote:Quite some effort that. I have planned this sort of double walk thing a few times, but once I am back at the car, I can never be bothered doing the second walk!

Good photos, particuarly from the Tarmachan ridge. The ultimate challenge would have been to do Beinn nan Oighreag and join the two walks together, although I can't work out if that would have made the day longer or shorter.

Malky,
We very nearly changed our plan as we neared the summit of Meall Ghaordiadh, i thought it would be a good idea just to carry on and catch the corbett Beinn nan Oighreag as the weather was not great at that time of day.
The wife thought about getting a B&B and then doing the ridge on the Sunday Morning, that sounded like a good idea, but with the dog trying to find a room may have been a problem at short notice.
so glad we stuck to the plan though as the ridge was by far the highlight of our short walking career.