"My name is Earl": Seeking good karma on the Fintry approach

"My name is Earl": Seeking good karma on the Fintry approach

our_route.gpx Open full screen  NB: Walkhighlands is not responsible for the accuracy of gpx files in users posts
After an well-embarrassing navigational blunder back in August, I thought it was time that I invested on one of those newfangled GPS gadgets

...I was lucky enough to get an old one second-hand from a friend, who had upgraded to a state-of-the-art one and offered me his old one. and I was keen to get out for a wee walk to try it out, as well as to brush up on my map-and-compass work (the GPS can run out of batteries after all, innit

?). The weather forecast was mixed: there had been torrential rain on Saturday, and Sunday was to start well, but with a whole lot more rain on the way around noon

. I thought a wee walk up the Campsies might therefore be the order of the day, aiming to get back home by early afternoon. I'd never been up Earl's Seat, and fancied having a look at it. Now, the standard approach - as described on the website - starts at Glengoyne distillery and climbs Dumgoyne before approaching Earl's Seat from the south, but I'd heard that the northern approach from Fintry via the Corrie of Balglass was spectacular, and I fancied giving that a try. Anyway, I'd been up Dumgoyne before as a student, as part of a long day of celebrations after the end of the second year final exams ... at least, I'm fairly sure I dimly remember a team ascent of Dumgoyne at some point before the Tequila Slammers set in

I got a reasonably early start, and there was plenty of kerbside parking in Fintry Main Street. The route up the Campsies from here starts up Dunmore Gardens, which is the street off on the left of the Main Street (coming from the east), right at the main road junction in the centre of the village. Just as Dunmore Gardens takes a bend to the left, an unpaved road (signposted as Quarry Road) keeps going straight ahead, looking at first unnervingly like someone's front drive I persevered however, and sure enough, the track cuts in front of the big white hoose and carries on past the quarry into Fintry Wood. Just about a hundred metres further on, there is an obvious fork where a clear path branches off the track to ford the burn to the right, and carries on to the right of the burn up to the top of the trees. My route today was broadly as described in the Cicerone guidebook on "The Ochils, Campsie Fells and Lomond Hills" - it's Walk 26 therein. The guidebook describes this as a "wide but shallow burn", but after all yesterday's rain, it wasnae so shallow today: wet feet already

!
At the top of Fintry Wood, a stile with a signpost gave access to a clear path that climbs to the right of the burn, quite steeply at first, up the northern escarpment of the Campsies just east of the obvious rocky prominence of Dunmore. Dunmore comes from "Dun Mhor", the Big Fort, and it apparently does have an Iron Age fort on top, although I didn't linger for any archaeology today. The sun was out although it was well squelchy underfoot, and there were grand views down over a still-sleepy Fintry below: 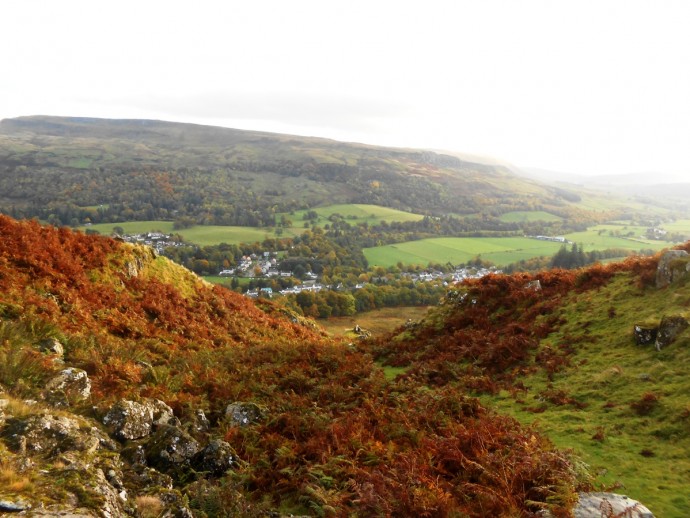 At the top, the path cuts west round the back of Dunmore, and continues more gently uphill before fizzling out just a bit east of the steep wee gorge of the Kilewnan Burn. There's a fierce-looking fence just across the burn that the Cicerone book warns is electrified - there was certainly a suspicious-looking wire along the top, and I didn't fancy trying my luck with it

. However, there is a small gap just where the fence crosses the burn, where the possibly-electric top wire doesn't continue, and I got across there easily enough, although I got wet feet again in the burn which was in spate. Lovely autumn colours all around, though. I headed on to the west, with no path to help now, and a fair bit of ascent still to go to reach the eastern edge of the Corrie of Balglass. The Corrie itself soon came into view, however, and provided plenty of distraction to ease the pain: it is indeed spectacular. I'd like to understand its geology: it doesn't look typically glacial - in fact, it looks like nothing so much as two-thirds of a massive volcanic crater. Anyone know? In any case, it is well impressive - I had no idea that there was scenery quite this grand so near Glasgow. It was fantastic just to walk round the rim of the thing, enjoying the changes in the scenery as I progressed. A path had reappeared by this point, easing progress. As I got round to the western half of the Corrie, my target - the S2K Marilyn, Earl's Seat - rose hazily into view with its head still in the clag. At this stage, it was looking fairly undistinguished. The Corrie's biggest crags are on its western rim, and there were delicious drops to my right, although no real exposure. I wouldn't want to walk this route in a high wind, all the same! As I got to the westernmost end of the Corrie of Balglass, the next corrie along - Little Corrie - came into view, with Earl's Seat looming above it and looking much more impressive now - in fact, it looks a genuine wee mountain from here, amidst this strange lunar landscape There's a pleasing sharp wee cairned rise, known as Jock's Cairn, just at the end of the Corrie of Balglass, looking over Little Corrie. I went up it for the views The onwards route to Earl's Seat looked obvious from here. A path continues right round Little Corrie, to end at Ballagan Tops, the next cairned rise at the western end of Little Corrie. From there, by the looks of it, a path cuts back up sharp left (south-east) towards Earl's Seat. This looked a bit of a detour to me, however, so I opted for a more direct ascent from about halfway round Little Corrie. This did save a bit of distance, but it was a fairly steep plod up. It was about noon by now, and the promised rain duly arrived

: in fact, it was fair p***ing it down by the time the cairn and trig point finally came into sight, and I was glad to see them. Time for the navigation practice now: the aim was to make my way back a bit more directly to Dunmore over the moorland, bypassing the two Corries on the way back. I played about with the GPS thingamajig, trying out all its various screens and buttons

and it did definitely help a bit, although I was certainly glad to have the good old-fashioned map and compass too.
Although I think I managed to steer a pretty direct course back, it took me a lot longer than I'd expected, mainly because of the rough, pathless and swampy terrain: after all the rain yesterday, and the fresh rain now, it was one massive Bogfest

- just as well I already had wet feet! There were some grand hazy views back north to the Corrie of Balglass on the way, though: Eventually, after a long pathless trudge across a couple of boggy troughs, I reached another fenceline that was heading in the right direction, to reach the edge of the Campsies' northern escarpment just to the west of Dunmore. Unfortunately, although I picked up the path to the east of the Kilewnan Burn fairly easily, I then missed the top of the direct path back down to the top of Fintry Wood. It starts off downhill fairly steeply just to the left of a drystane dyke (when approached from the west) and is easily missed (by me, anyway

!). Ah well, at least this varied my return route a bit. I continued beside an obvious electric fence (unequivocally signposted as such, in fact) and eventually had to do a bit of limbo dancing under this to reach an ATV track on the other side. Eventually, after a gate, I was able to cut down steep brackeny ground to the right of a burn, to splash over said burn and reach the stile at the top of the path back through Fintry Wood. One more burn crossing (yet more wet feet

) and I was back on Quarry Road, in Fintry Village.
This was a long walk on some fairly rough terrain, and it took me longer than I'd expected - the Cicerone guidebook quotes an extremely optimistic "3 hours 30 minutes"

... it took me two hours longer. This was a grand walk all the same: the Corrie of Balglass really is spectacular, especially at this time of year with all the autumn colours to enjoy

Re: "My name is Earl": Seeking good karma on the Fintry appr

I did this walk a few years ago and I can vouch that it is an electric fence. (bit like a sign that says wet paint. Ye got tae touch it tae find out)

I enjoyed reading that, brought back memories.

Re: "My name is Earl": Seeking good karma on the Fintry appr

Managed to reach Earls seat on 3rd attempt earlier this year,,from Glengoyne, seriously bad clag and the closest we have come to being lost, (my theory was, its the Campsies,,2 hrs in any one direction and you get to SOMEWHERE lol)

Fancied this route in from Fintry,,maybe a good way to try out my navigational skills , well , im reading a book lol)