A stunning autumn day in the high fells.

great gable.gpx Open full screen  NB: Walkhighlands is not responsible for the accuracy of gpx files in users posts
The amount of development around Honister Hause probably isn’t to everyone’s taste – while there are old mine-workings everywhere that seem part of the scenery now, and you’re often thankful for the paths and tracks that go along with them, the living version (and more especially, its tourist trappings with their ubiquitously garish orange branding) is a little different. But it’s certainly doing a good job of bringing visitors in – the big carpark was full, and the well-made old tramway heading straight up to the Drum House is as busy a hill-path as I’ve seen midweek in a long time. It’s hard to see quite where they all go though (on up to explore the mines perhaps? Although several dozen just seem to halt at the highest point of the track…), as there were very few people around for the rest of the day – no-one at all between there and the summit of Kirk Fell, and barely a handful even on Great Gable.

Moses Trod gets a terrific write-up from Wainwright, and justly so – it’s a lovely easy path contouring quietly around the head of the western valleys, with wonderful views down to Buttermere and Ennerdale and (albeit straight into a glaring sun this day) up to the vertical northern crags of Great Gable. The only downside, if heading to Kirk Fell, is that it drops you off quite well above Beck Head, on the Gable side, with a fair bit of ‘bonus’ up/down left to do. The path up from there is steep and quite loose in places but over pretty quickly, to be replaced by an easy stroll across the broad flat felltop. 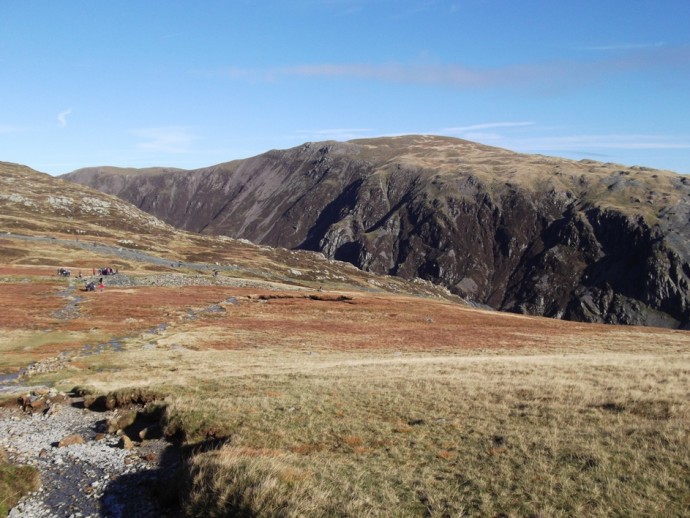 Dale Head, over a crowd at the Drum House 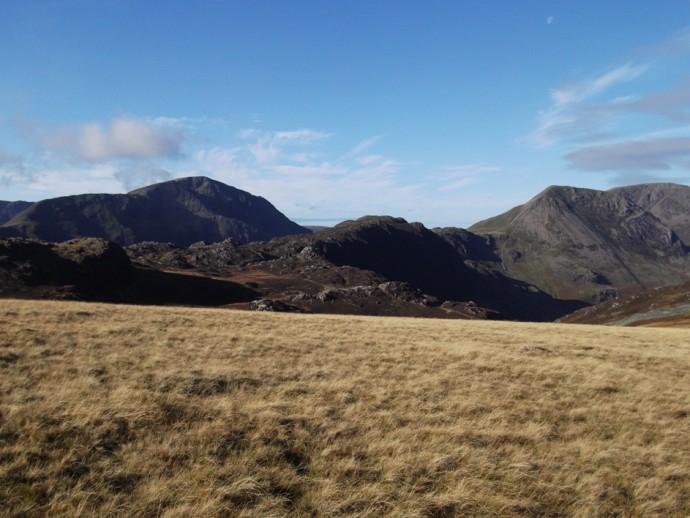 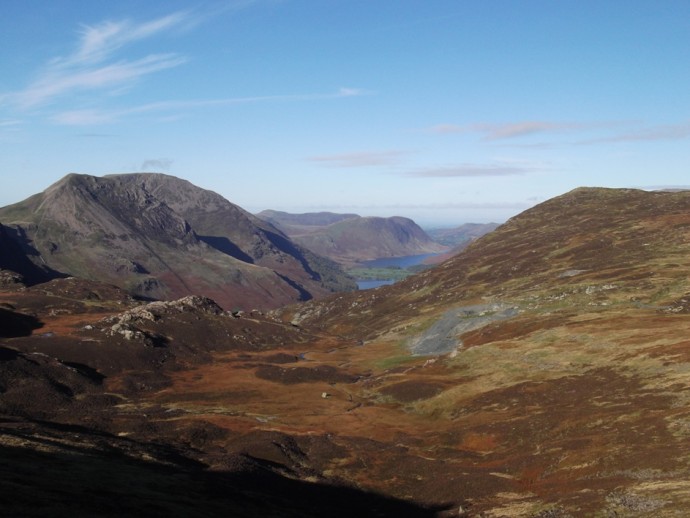 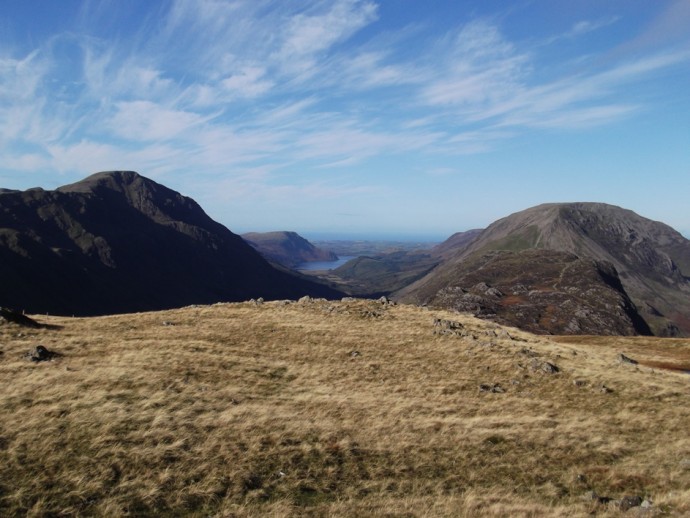 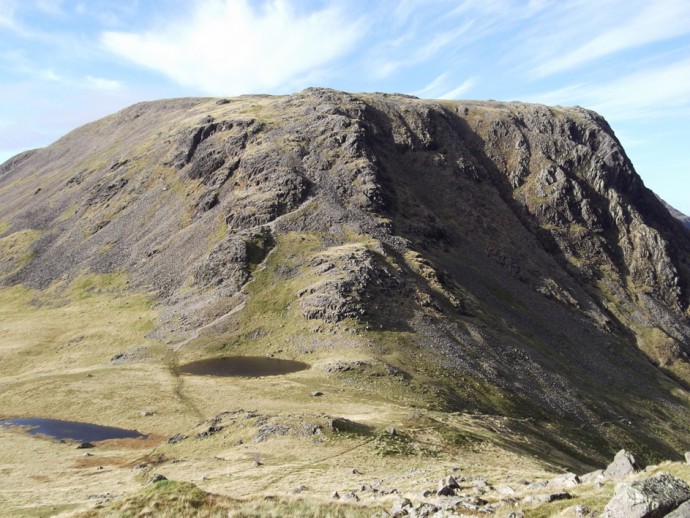 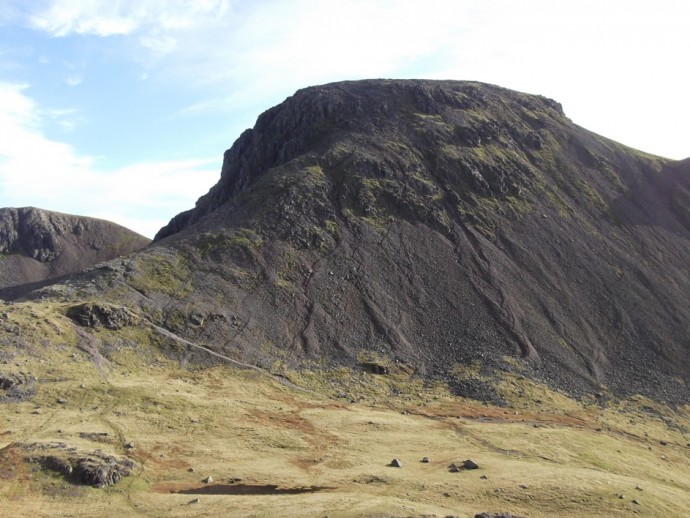 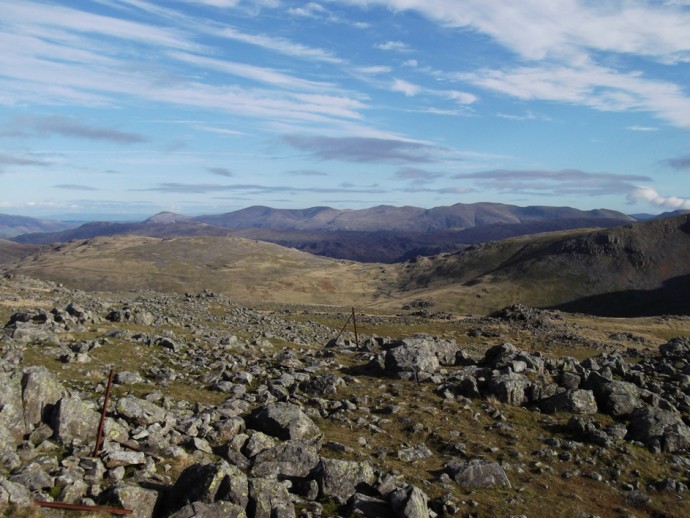 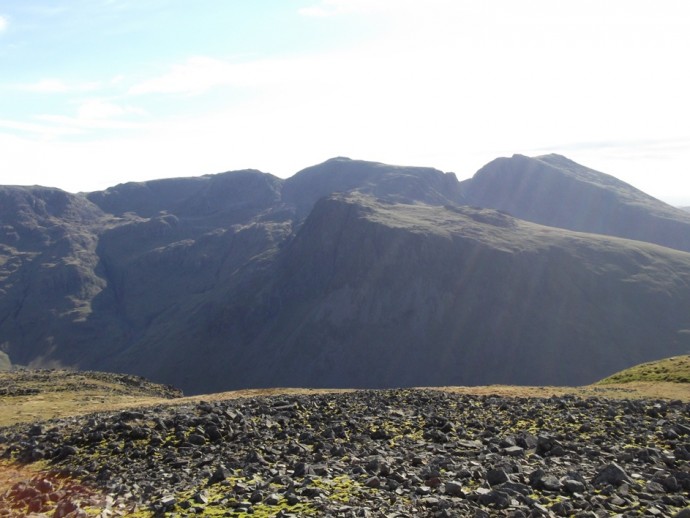 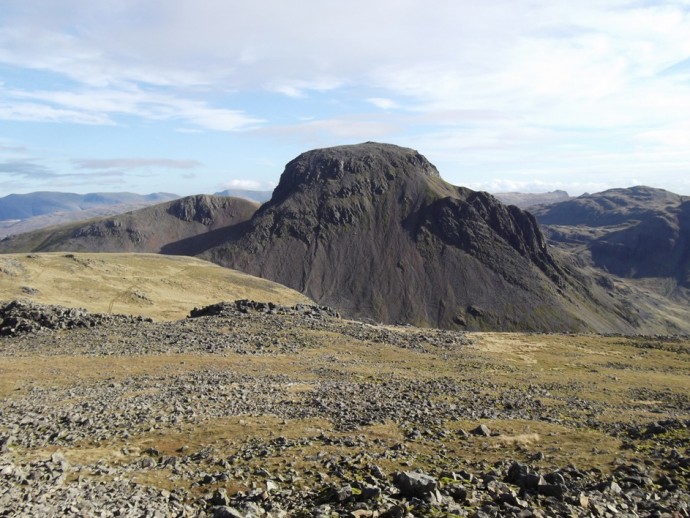 Great Gable is a striking sight from this side - its west face looking daunting and quite impossible to climb. So many things do until you get closer though, and this is none too hard beyond its steepness, and actually really enjoyable – a little loose early on but then a good zigzag path through the rocks and a final long easy scrabble over the boulders depositing you right by the summit: a bit slippery in places (and probably quite horrible as a descent route) but never at all exposed or dangerous. 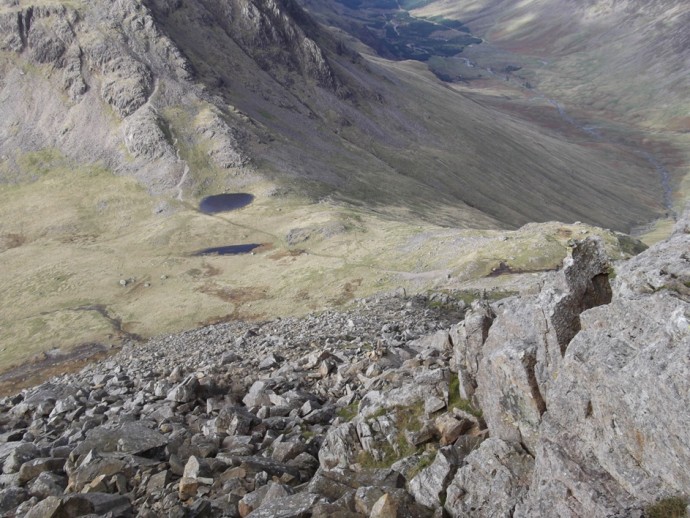 Looking back down to Beck Head & Ennerdale from the ascent route 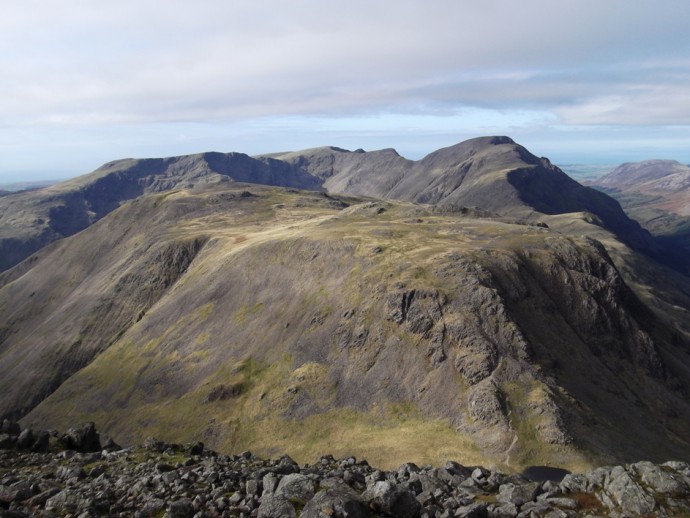 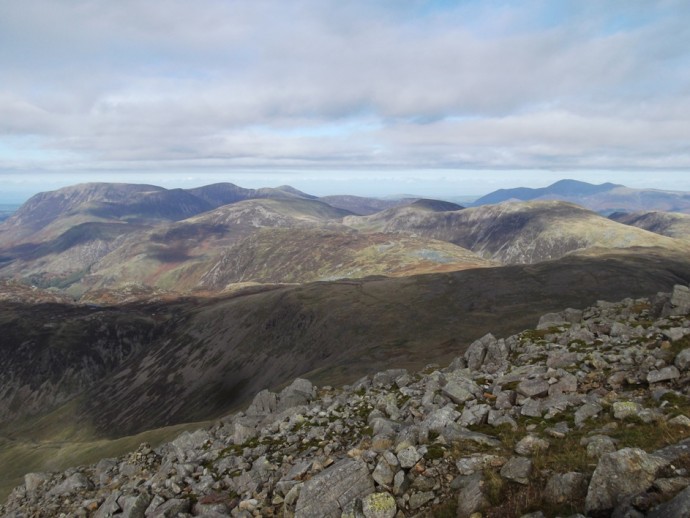 The North-Western Fells from Great Gable 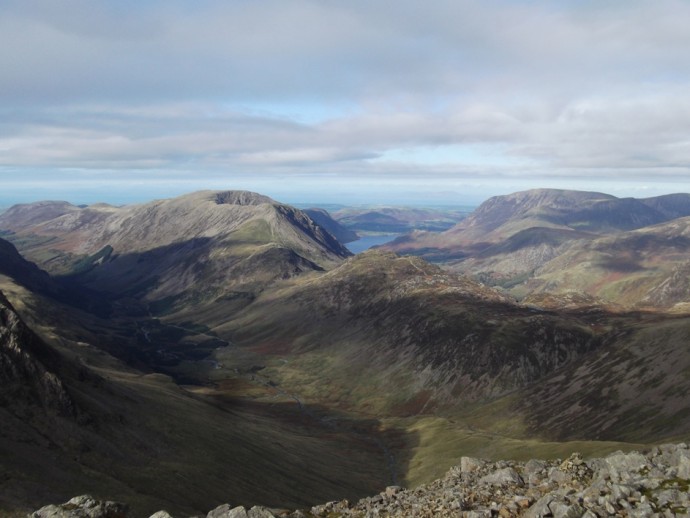 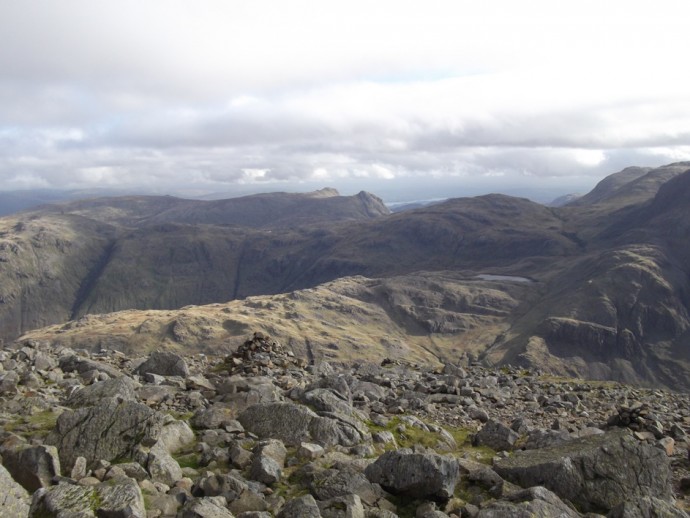 Great Gable is a wonderful place but I’m not quite sure what – if there is one? – the good way down is… The route down to Windy Gap is again kneejarringly steep and rough in places, needing rather too much care to enjoy. That’s the end of anything difficult between there and Honister though – the path over the fine little peak of Green Gable and down (on a short ‘bagging’ detour) to the more nondescript one of Base Brown is easy, if a bit of a splosh towards the end. 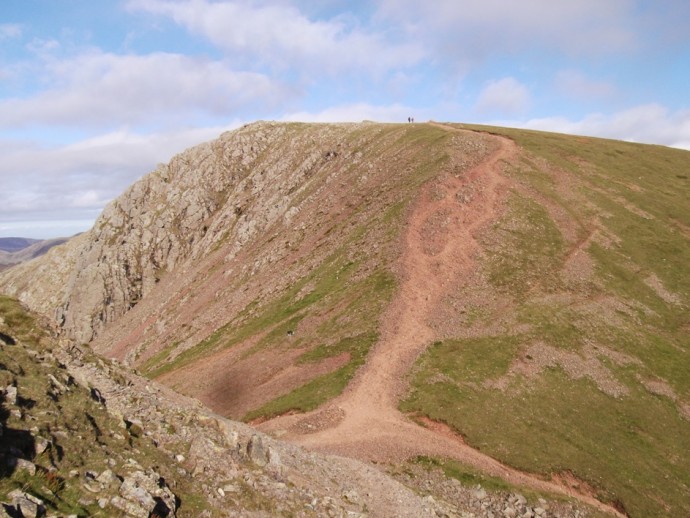 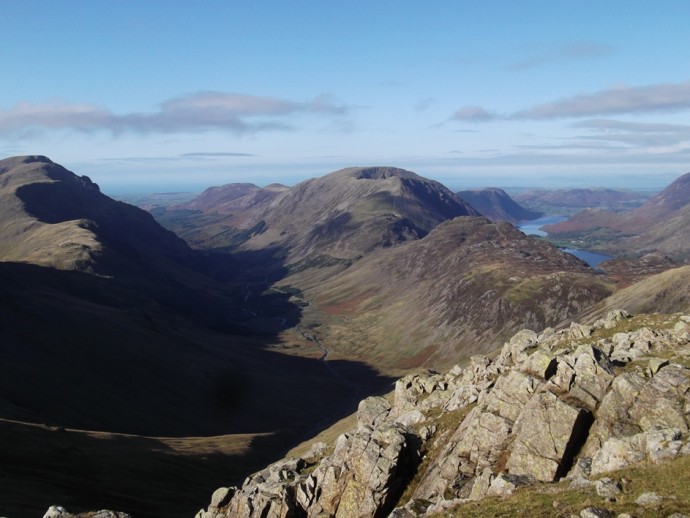 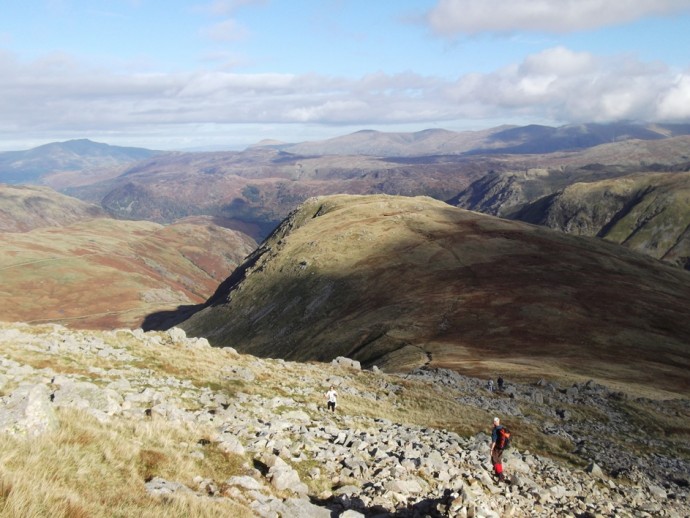 There’s probably a quicker way back to the Brandreth ridge than nearly reascending Green Gable first, but it wasn’t obvious on the ground – a thin little path contouring below Gillercomb Head didn’t have an obvious start and looked a very hairy prospect on a slippery day... That peak and Grey Knotts aren’t as striking as the early hills, but it’s still rather a nice rocky ridge with a fine reprise of the earlier view down Buttermere, and only a few downhill yards from a return to the easy tramway back to end the day. 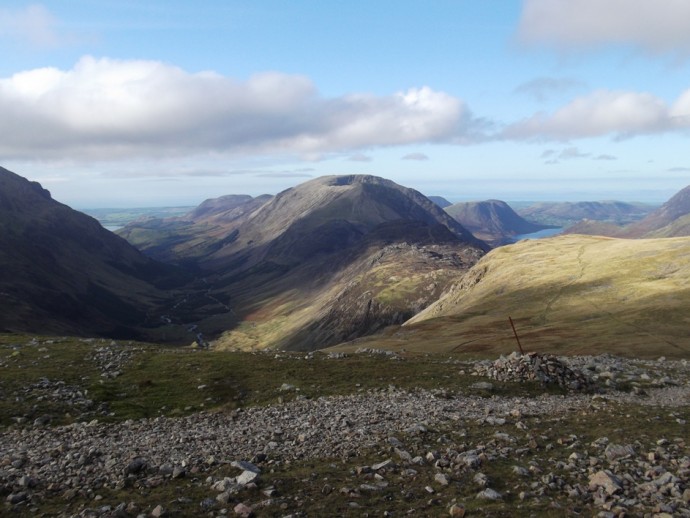 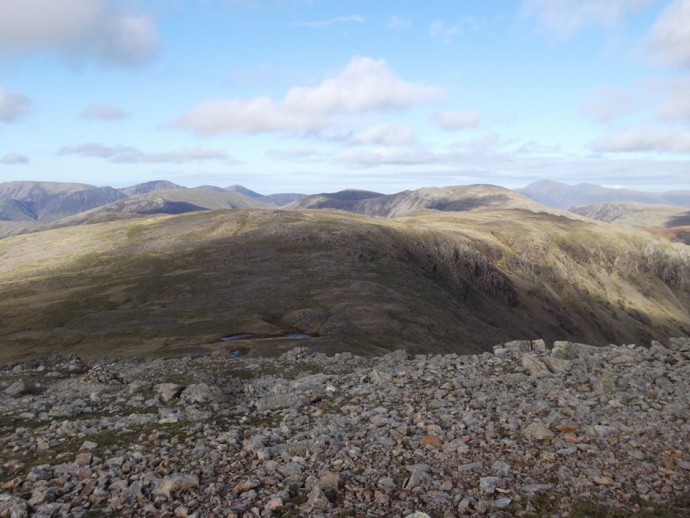 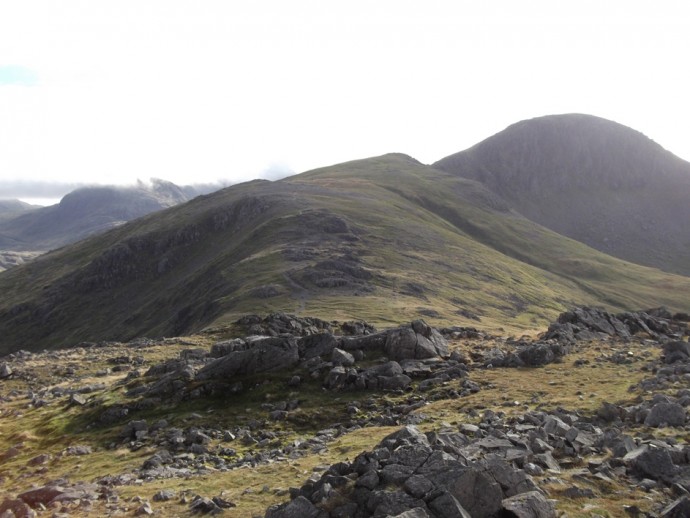 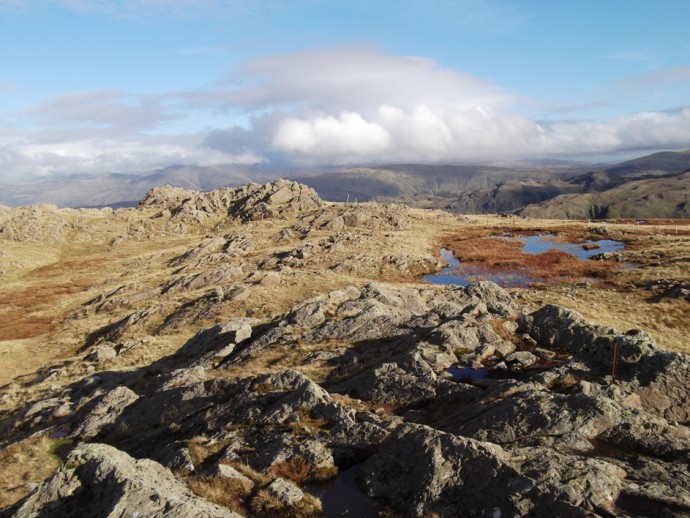 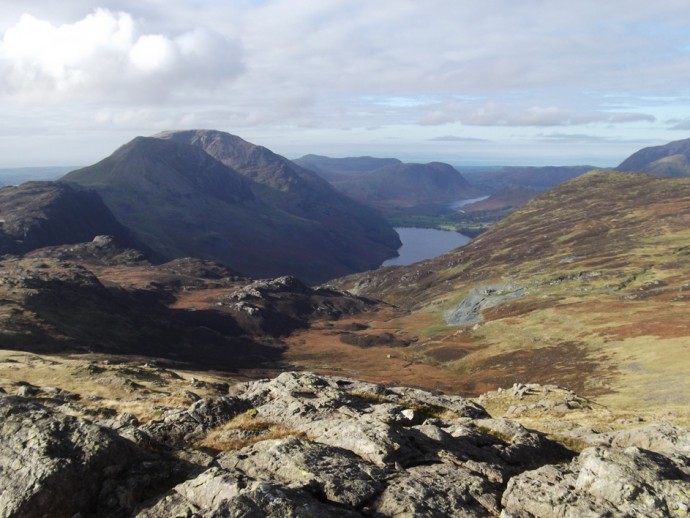 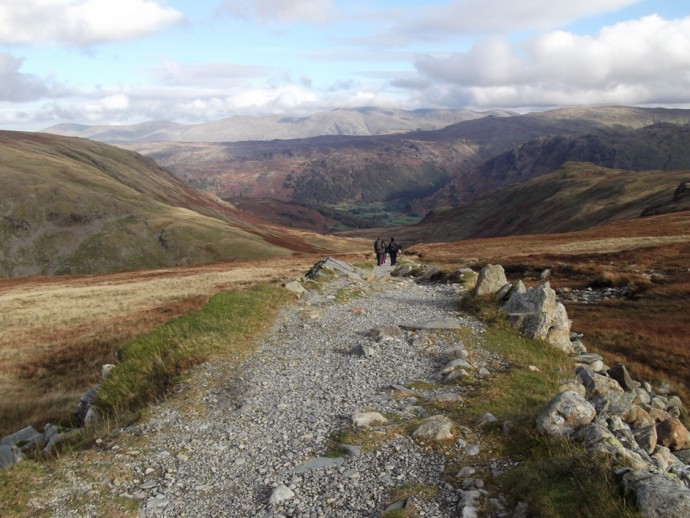 Wow. What a day you had for that!

Thats the exact walk that AJ and myself did about 5 months ago. I will remember that walk up the North ridge of Great Gable for quite some time. I had pretty much ran out of water by that stage.

Very nice,think you chose the best day of the week

Another excellent report, poppiesrara, and you certainly had a great day for it. We've still to do these so always useful to get ideas of how to combine different routes. One thing's for sure though, we'd take a lot longer than your four and a half hours!

Thanks, all! Really pretty highly recommended this way, perhaps even more so without the couple of little detours I took.

think you chose the best day of the week

Got very lucky - it now looks rather like the only decent day in the middle of a lot of awful ones...

we'd take a lot longer than your four and a half hours!

It's a pretty easy-going route, bar a couple of steep bits, really. I could almost guarantee that you'd beat me in a race down off Great Gable though - that must have been about the most painstaking half-mile of wrong turns and backtracking I've ever walked!

A great day spent in a fine part of the Lakes. Strangely I found that way down off Gable to be quite entertaining

Looks like you had a beautiful day for it. Great photos too.

I've always had a bit of a soft spot for Honister and the walks that start from it.

richardkchapman wrote:I've always had a bit of a soft spot for Honister and the walks that start from it.

Always feels like cheating to me (starting that high up)

stevesey wrote:Always feels like cheating to me (starting that high up)

No such thing as cheating when it comes to enjoying the fells... especially when trying to get young children to the summits. The first Wainwright I took the children to was Haystacks from Honister (which may explain at least part of my soft spot for it).

Great report and wonderful pictures. We're planning to complete our 214 on Kirk Fell from Moses Trod in September.

Nice report with wonderful photos. The one from Kirk Fell to Gable is superb.

Well done and a great effort