The forecast didn't look too bad so we packed up the wee car and set off up to Contin and along the scenic single track road towards the Loch Luichart Power Station and Dam. Our destination for today was the Marilyn Sgurr Marcasaidh. As we neared the parking area the heavens opened and we wriggled into our waterproofs, gaiters and boots while still sitting in the car

We eventually ventured out and as we walked up past the large white house we noticed a sign that said the gate there was open between 9am and 5pm Monday to Friday, so we could have got the car a little higher up the road, to the dam. Its not much of a time saving though and the walk to the dam only took about 10 mins and was breathtakingly beautiful.

We followed the initial part of the route Malky_c had posted last year, knowing there was no path up this hill. Once over the dam we left the landi track and made a bee-line up through the crags and bracken. With the rain everything was wet, and the bracken although starting to go a coppery colour was still about shoulder height so it was a pretty wet and very steep start to our walk! Derek managed to find a route avoiding the worst of the crags and we were soon up the first section of the walk and wading through knee high, sodden heather. The rain had stopped and a watery sun tried its best to dry us out. Ahead we could see the next craggy summit to be climbed, and about 20 stags stood proudly on the steep slopes watching us. I wondered where all the hinds were? A beautiful rainbow hit the herd and they headed round the side of the hill away from us.

We climbed over a gate, our attempts at trying to untie the houdini style rope failing miserably! Derek managed to rip a hole in his waterproof trousers in the process so spent the rest of the day slightly damp

However the good news was that we found a track of sorts heading in roughly the right direction, so we followed that for a little way, before diverting across to look at something strange on the hillside; something which resembled a huge outdoor broadcast TV screen. I've no idea what it was, but it was enormous!

I checked my map, nothing but a river was marked. Derek took out the GPS and there it was, a lovely big track heading almost to the foot of the hill. It was too late to retrace our steps down the hill now but at least we wouldn't have to reverse the steep climb up through the crags and bracken

The next part of the route looked really scary in the wet conditions. The rocky summit was reached by following some very wet deer trods up between slippery, lichen clad rock. I was really grateful for the strength of the heather and grabbed handfuls of the stuff as I pulled myself up the steep slopes. I was really nervous that we might have to downclimb something similar on the other side.... We finally reached the 2 little cairns marking Pt 506 on the map and to my HUGE relief a wonderful wide, flattish summit ridge lay ahead of us. On a good day the views would have been spectacular, but in the watery light we had today everything looked as though we were seeing it through a window covered in condensation. We could see the huge Loch Luichart windfarm clearly enough though

We made our way happily across the springy, mossy terrain. Some little peaty sections are easy to pick your way through. There were several little rocky outcrops before we saw the welcome sight of the trig in the distance. Luckily the rain stayed off while we were at the summit, but started to fall really heavily and we ended up sitting inside our emergency shelter to eat our lunch. That's the second time we've used it and it makes a really cozy, dry lunch spot

We wandered a little to the West of the summit and followed a stream down to the road. The going is good, a bit of heather that has been burned for the grouse, but otherwise much easier than the ascent. We finally reached the track and walked out, the rain finally abating and the sun eventually coming out

It would be really easy to cycle all the way to the sheep fank on the left of the road and a little ford crossing the road (Grid Ref 360 579) and then head up to the summit that way, if you wanted to avoid the steep, pathless ascent we had taken. Having said that, on a good day the summit ridge would be a wonderful walk Lots of parking space at the start of the walk You could actually have driven up to the dam itself Rain falling on the dam The start of the pathless ascent, looking back to the dam The next craggy summit Derek pointing out the landrover track in the glen below! Wee cairns at the top of the craggy Pt 506 Derek at the summit 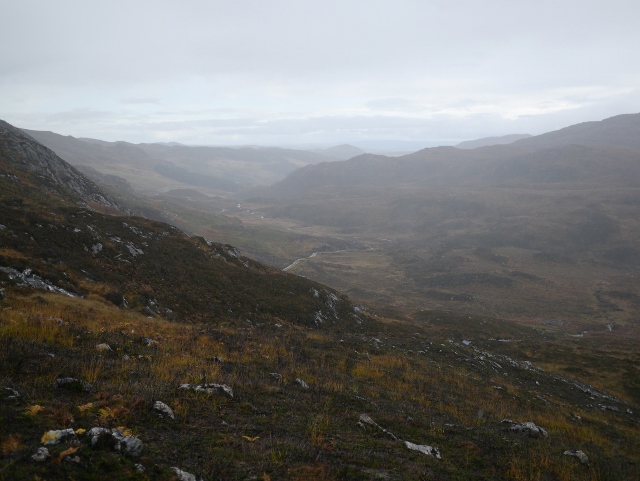 The much easier descent 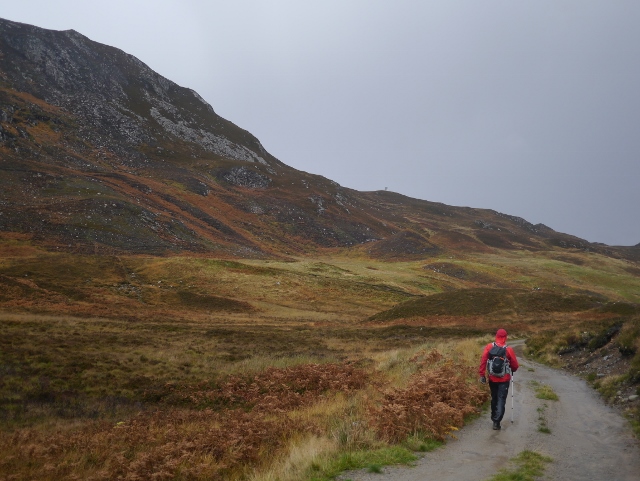 The last section back to the car 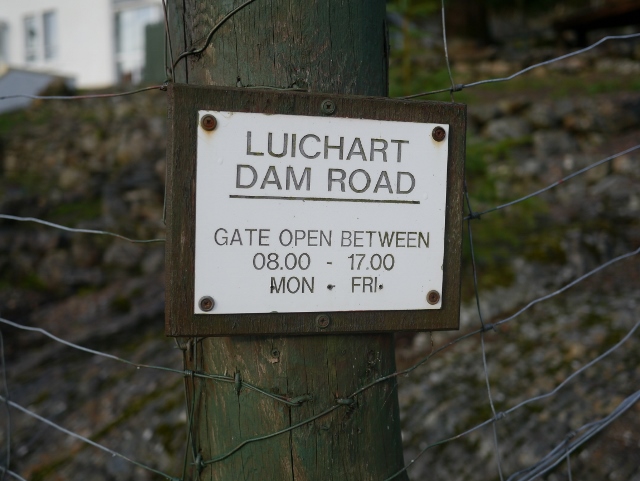