So many places in Scotland deserve far wider recognition than they currently receive, and Caithness has scores of such places. So many gems, little known outside the area, but worth a journey for anybody drawn to the outdoors.

The famous John o'Groats is an exception to this rule. Even on a sunny summer morning, the sweeping expanses of tarmac and portacabins selling greasy food failed to create a positive impression. Fortunately, just along the coast is Duncansby Head, close by in miles but a world away in character from John o'Groats.

Rather than walk the entire five miles that this report is tagged under, we drove to Duncansby Head and opted for a there-and-back walk to the Stacks of Duncansby. Even from the car park there are good views over John o'Groats and Dunnet Head, with Holborn Head in the distance. Beyond the fence in the foreground is an enormous geo, which is worth a look before heading off to the south. Despite being mid-August there were still a few chicks about, clinging to the cliff sides of the impressive Geo of Sclaites. A quick shortcut missing out the next headland and we were back at the cliff edge, with the perfectly shaped stacks dominating the view. Luckily we remembered to look directly down at the bay below too, where several seals were swimming about in the shallow water (no decent photos sadly!). 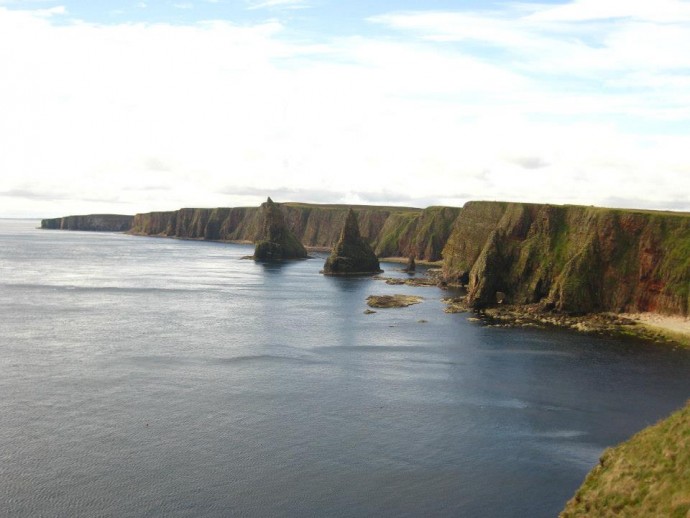 Add in the arch of Thirle Door and it makes for a truly captivating scene. It's fascinating to see how their profiles have been affected by the different degrees of exposure to stormy seas depending on which way the rock faces. 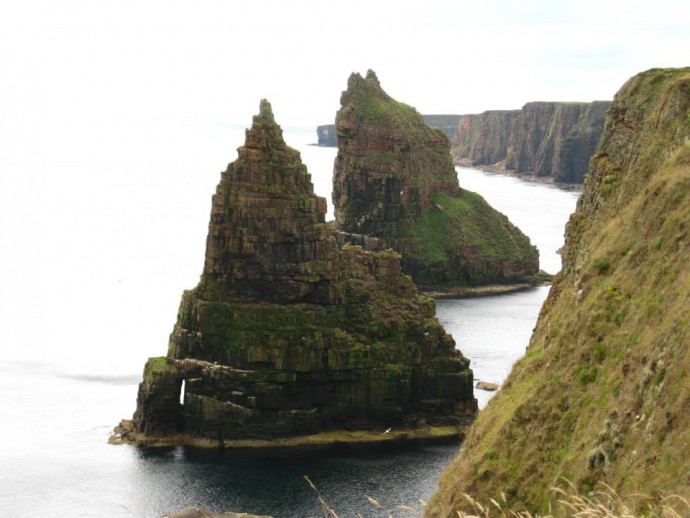 Just as amazing is how little the stacks have eroded vertically over the years - they're still virtually as high as the mainland, rising to razor-sharp points which make them look a little like sails.

Imagine how they would dwarf the real thing... The area around the Stacks was almost deserted, especially compared to the dozen-or-so vehicles at Duncansby Head car park, and the coach-loads at John o'Groats. So many people must miss out on what has to be one of the crowning glories of the far, far north-east.

Also don't miss: the Castle of Mey, which we headed to next. Whoever left that car there... Nice wee walk! As you say, quite amazing how the stacks eroded. I must go and check them out some time. Thanks for sharing.

Love the pictures of the fluffy chicks.

We thought it was a great walk too and also got some eerie wailing from the seals.