A wee bit windy on the Wyvis

A wee bit windy on the Wyvis


So, MrsR was off on a long weekend to Blackpool with her sister for a family friends birthday bash. Blackpool

Mmmmm, I’m off to the hills

In the weeks leading up to this I’d hatched plans to try and get maximum Munro out of my four days, but of course I hadn’t banked on the great British weather

It seemed to suggest my plans might not work. And Friday ended up as a washout, with the walking down to start on the Saturday.

It was actually a bit of a later start than planned and arriving at the parking area just before 9 a.m. I was surprised to see I was the only one there. It was looking like I’d have the hill to myself then. Heading along the path a short way from the car park

Initially the conditions were overcast, with the day’s target hiding behind a shroud of clag. Not too windy by the looks of it at this stage. It’s an excellent approach path and as I walked along it a goodly number of chinks started to appear in the clag leading to an increase in the amount of blue sky. Actually, I was surprised and also pleased by just how good the weather was turning out to be given the forecast and Met office app suggesting more cloud than I was actually getting. 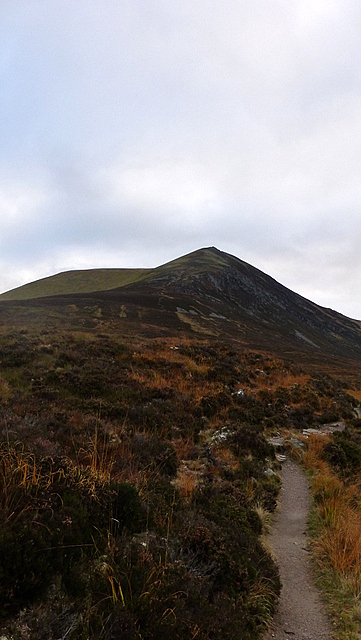 The wind as I made my way remained pretty benign and remained so for the toil up An Cabar. Thankfully the compensation for the slog up this slope was some great views to An Teallach, the Fannaichs, Strathfarrar and more. Views that just got better as height was gained and cloud cover receded Ignore the windfarm. Not sure what this hill is, but it caught my eye 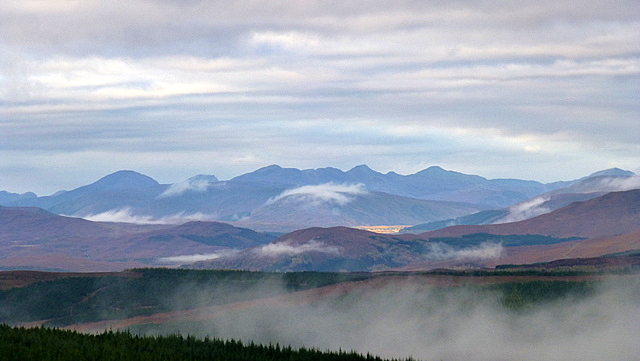 An Teallach appearing out of the mist And a few moments later The An Cabar path

Arriving at the cairn on An Cabar and I was thinking my luck was really in. Blue sky, great view to the summit and it was as calm as you like

Warm even, with the sun on my back

The reputation for Wyvis to be a windy hill seemed simply untrue to me at this point. That would soon change, as I was to find out Over the top of Little Wyvis I thought I had a gentle stroll to the summit and then to enjoy cloud free views. Unfortunately as I ambled along, doing my best to comply with the request to walk in the centre of the path so as to restrict further erosion, a great clump of clag rolled in and stole my views from the summit. And by now the Wyvis wind had kicked in

No longer was there a warm sun on my back either. It was f….f….f….f….freeeeeezzzzzing, With little (as in no) prospect of any views I decided to head back the way I had come. An interesting exercise, as the wind, which had really picked up by now, tried its best to blow me into the Atlantic

The initial drop down was made more challenging in the wind with the slope being open with no place to take cover, so exposed in the relentless wind. Leaning back into the wind it took all my effort to remain upright as I got buffeted about. And it wasn’t just gusting. It was constant. Slow progress was made as I edged my way down that initial descent. I was feeling something like the winds play-thing as it whipped around me and I stumbled down the slope.

After this initial section I was at the top of the zigzag section of the path. Arriving at the top of the zigzags I spied a woolly hat, which on closer inspection having been retrieved clearly hadn’t been parted from its owners head that long ago. Turning into the zigzags the owner and their companion were clearly struggling to turn themselves round and head back down, rather than battle the gale to the summit.

At the zigzags it was a constant battle – walking into the zig and my head wanted to be detached from my shoulders as I walked into the wind barely able to breath, then turning into the zag and I was being blown forward stumbling as I tried to head down the slope

This section of the descent was part exhilarating, part "ess ach eye tee"

Thankfully “Frankenstein’s Bolt” did what it was designed to do and ensured my head remained firmly attached to my shoulders, despite the winds best efforts. Eventually I was also able to reacquaint hat with owner as we expressed our enjoyment at what we had just endured

We did pass a few fellow walkers heading up as we continued down, warning about the strength of the wind. One particular couple of lads gave me a look that pretty much said “Yeah, yeah, whatever………old man”

As height was lost the wind finally abated and it was a straightforward walk back to the car. A last look back at Wyvis

I had thought about adding on Little Wyvis on the return, but had been put off by the strength of the wind on the big Wyvis. Even so all in all it was a great day out in the hills

Nice report Peter, I pass this hill quite a few times in the year and always say I must do it. Well done.

It's getting chilly on the tops now as well ,done a Auchnafree hill today and felt it cold on the top too,need to get all the winter gear packed now.Some good pics ,especially the An Teallach one,saving Wyvis for my last munro,hope it's no too windy

Great description of the wind - it's hard to capture in photos. Sounds like it just a wee bit invigorating! Super report and photos.

Nice one Pete, some good images to savour......