Grahams included on this walk: Morven


One on its own, this one - a walk quite unlike anything else we've done before. Morven - the very top of northeast Scotland, visible across the sea from many of our local Aberdeenshire peaks, and Maiden Pap, another Morven but in miniature.

The weather so far for our week in Caithness had been a mix of sunshine and heavy showers, and some blustery winds. Today looked to be the best of the bunch, with fewer showers and a lifting cloud base. We parked up at the end of the long, narrow road to Braemore and began walking along the wet tarmac. Immediately there was a bridge across Berriedale Water. Downstream of the bridge, this initially placid river carves a deep gorge through the moorland, eventually meeting the sea at Berriedale where it's responsible for one of the most notorious sections of the A9, the Berriedale Braes. Today we were heading upstream, however.

After passing the estate at Braemore an estate worker came past in a four-wheeler. He was concerned that we may have been leaving gates open as we passed through them, but we assured him it wasn't us. The track continued ascending gently through a mixture of open fields and plantations. Maiden Pap was prominent ahead to the left, looking scarily steep and a great deal higher than its 484 metres. Morven peeked out from behind, still partially cloud covered. 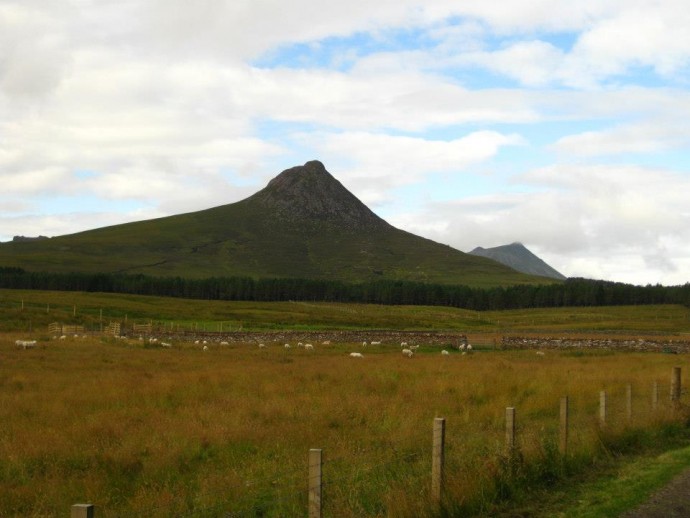 The hills rise out of the peat around here at nearly vertical gradients. The only ways up the front side of Maiden Pap which avoided the crags were via one of a two narrow, wet gullies, which merged halfway up. We went for the right hand gully, which looked to be marginally less steep.

With most of our walking experience being based in the rolling Cairngorms, we weren't well accustomed to such steep inclines. Happily however, the ground was covered by thick, lush vegetation which had transformed the ground into a step-like pattern. As such, despite the steepness, hands were only occasionally required. And despite the wet vegetation, the ground was firm and not boggy underfoot.

We saw scores of these pretty orange plants growing in the gully, which we hadn't seen before elsewhere. We later found out that they were Cloudberries - which make up one of the Kopparberg drinks and are apparently very tasty! This frog must have been a long, long way from the nearest water body. Why it decided to climb Maiden Pap I'm not sure... maybe other animals are sub-2000 foot baggers too? Wildlife was certainly in plentiful supply in this most unlikely of locations - a narrow gully on this random lump of rock in the middle of nowhere. Just focussing on the immediate surroundings, it would be easy to assume you were in a very enclosed, intimate environment. Looking behind, we were reminded of the exposed location and open countryside around! Progress was fairly quick and 200m-ish of ascent later, the gully eventually opened out onto a low bealach between the twin peaks of Maiden Pap. From here, a faint path easily led to the right, up to the top of Maiden Pap. The summit was refreshingly tiny, with amazing views across what must be most of Caithness. To the west, Morven reared its shady head out of the landscape, promising another steep ascent. From here we headed off the back of Maiden Pap - much less steep than the front side and a good route of ascent if you're not a fan of heights or steep gullies. Morven was now catching some morning sunshine. Maiden Pap still looked impressive as we left it behind. The next few kilometres promised to be the make-or-break part of this walk. No paths, and a long section of flat peatland, criss-crossed by water channels - as well as walking boots which were probably past their prime.

Fortunately, the going wasn't too bad - despite this week's rain, there'd been a dry summer preceding it. With some careful route finding to avoid the boggy streams, our feet stayed (relatively) dry. As we began to ascend the side of Carn Mor, we were able to look back with satisfaction on cotton fields, Maiden Pap and the subsequent trudge. The three rolling tops of Scaraben over to the left looked a long way away - they'd originally been planned for the return journey, but this was looking increasingly unlikely. A heavy shower passed over us as we stopped for a break at the top of Carn Mor. This was part of the sub-2000 foot hill of Smean to the south - we planned to visit Smean itself on the way back, en route to Scaraben. Morven now looked absolutely massive. And so it proved to be. After descending slightly, we began the reascent on Morven itself - just over 400m of punishing vertical. The ground was mainly grassy, becoming shorter with height gained, but the lack of any rock features or taller vegetation made for a slightly uncomfortable feeling of exposure - even though obviously any fall would just be onto soft grass!

It really was relentless. And steep... OK OK, maybe not quite that steep. After what seemed to be an age, we emerged onto a surprisingly gusty summit, with a path appearing out of nowhere for the final easier section. The white, stony top of neighboring Small Mount looked intriguing, and was also receiving a heavy rain shower. On Maiden Pap, both the cloudberries and time had seemed perfectly ripe - the time ripe for an ascent of all four listed peaks in this area. However, approaching rain and a gruelling ascent to Morven made us think again. We decided to head for Berriedale Water and join the end of the track from Braemore - in other words, head for the car! The descent from Morven was equally relentless as the ascent, with the ground now slippery from the departing rain shower.

There was a faint path in places as we traversed the lower northern slopes of Carn Mor on the way back, keeping slightly above the flat bogs around Berriedale Water. Again, this was wet but not terribly so - although it was still a relief to reach the dry track at Corrichoich.

We finally reached the car at about 5pm - eight hours after setting off. It was a shame to miss out on appealing-looking Scaraben, and the uglier-sounding summit of Smean (we should have ascended the latter on the outward journey). But that would have made for an extremely long, tiring day. A couple of peaks for the future maybe? The time just wasn't ripe today. And neither was this cloudberry. Nice report there,
Glad you took in the "Maiden Pap" as well. Its well worth the effort for the shortish climb.
I've done those hills many times as being local its a nice wee warm up for bigger hills down south. The views on a good day just go on forever.

Here's a trip trip I did with some visiting relations and a nice wee plug for Old Pulteney.

Thanks, RTC. Trekker - I used your walk report to help plan the route in the first place. We did visit Old Pulteney on the trip too.