So this was the third and final day of my long weekend walking. Having enjoyed two days on Ben Wyvis and Ben Klibreck I decided on a quick Corbett on the route home. The forecast suggested it was looking good for the Braemar area, so I decided on a quick trip up Morrone was called for

Initially things didn’t look good as I drove up and over the Devil’s Elbow, in a misty, claggy rain

By the time I parked up at the large car park on the edge of the village though, while it was still overcast, at least the drizzle seemed to be away.

This is a nice easy route, following an initially way-marked route up to a view point and sign post. From there it was an easy path to the summit, with good views back to Braemar and the promise of good views back toward the main Cairngorm plateau as well as the hills of the Mounth. Well, if the cloud would just lift a bit The next section of track Autumnal view back toward Braemar

Higher up the path deteriorated into an ugly eroded scar and, as with the previous two days, the wind was up Not such a good track now, but a nice view back toward Ben Avon

By the time I hit the summit and the delights of the radio relay hut and mast the wind was well and truly up and quite frankly it was freezing up there. Ugly as it was the relay hut did at least give me some shelter I did meet one other walker heading down off the summit as I arrived, but other than that I didn’t see a soul on the hill.

And as if a switch had been flicked, just as I arrived at the summit the cloud was lifting, giving me the views of the surrounding hills I had hoped for But great views from the summit, despite the mess up there 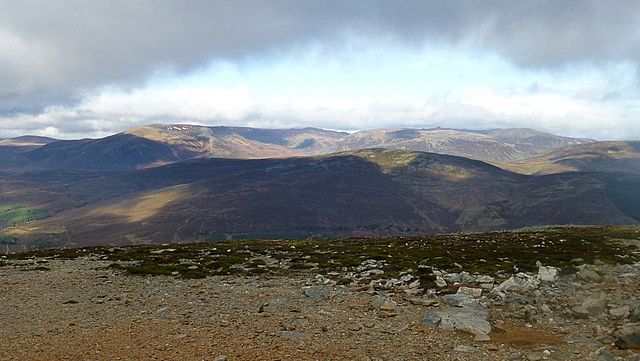 Rather than retrace my route up I opted for the snaking hill track over the 824 point and down to the single track road back to the village. Made for a good little circuit and I was blessed with Lochnagar finally peeking out from behind the cloud Looking back the summit on the way down

Panoramic shot back to the Cairngorms It was still early, so maybe I still had the chance to sneak a cheeky wee wan on the drive home.......

Re: All on Morrone