g39.gpx Open full screen  NB: Walkhighlands is not responsible for the accuracy of gpx files in users posts
There was space to park just over the bridge at Polldubh, next to a Plas y Brenin minibus, they seem to have taken over the Highlands! I could see the group going up the north ridge of Stob Ban, I decided upon the ordinary footpath route. This is a great walk up the glen, there were no footprints before me. The path was banked out with snow in places and the hills ahead looked plastered and potentially dangerous. This is a grand setting with an increasingly dramatic sight ahead as you ascend, emphasised by the snow and frost and looking particularly alpine to the east. plastered to the east

Instead of climbing straight ahead across the final steeper and perhaps unstable slope to the ridgeline I took a curved rising traverse across rockier ground to the west, meeting the ridge closer to Stob Ban. traversing onto the ridge

I was surprised at how steep the final ascent looked to be, exciting-looking along the edge of the cliffs. Still no footprints, I was the first this way today. I took my time to savour the climb bit by bit to the summit. The snow was mostly soft, not having consolidated yet from the fall a couple of days ago. 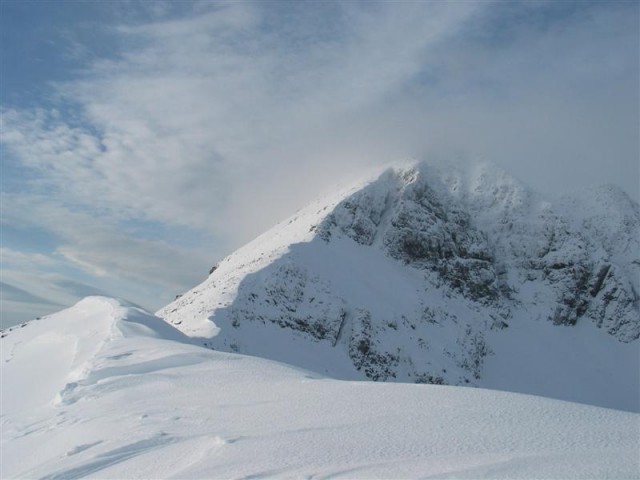 Still blue sky but high cloud was gradually drawing in and the light was becoming flatter. Just below the summit I detoured slightly to climb a 2 metre high vertical bank, just a bit of snowy nonsense! At the summit now, I’d been there just 60 seconds when the Plas y Brenin group arrived. We all had a bite to eat and I had a chat with a few of them. One of the group appeared surprised that I was out on the hill solo and asked whether I was concerned about the risks. Well, most of my hill days, started 18 months ago, have been solo and in winter.

Part of the group decided to go back down the route I’d ascended, others went for the route I was about to follow. I didn’t want to leave just yet and besides, they could break trail! So I followed a bit later, soon taking off the crampons since the snow was so soft on the rocky terrain. The route starts with a descent then ups and downs along the excellent ridge. PYB on the horizon

There are a couple of scrambly sections to add additional interest. Whilst walking the ridge the cloud cover became complete and started to lower so I upped the pace. Just after I reached the summit of Mullach nan Coirean a gale came as if from nowhere, instantly blowing up huge clouds of spindrift and blocking out visibility. wind about to hit

But I was prepared and within 5 minutes of descending the north ridge I was out of it. The descent in the snow was fast and easy, the purgatory started below the snowline down a steep tussocky section that was covered with ice in many places. Not nice. 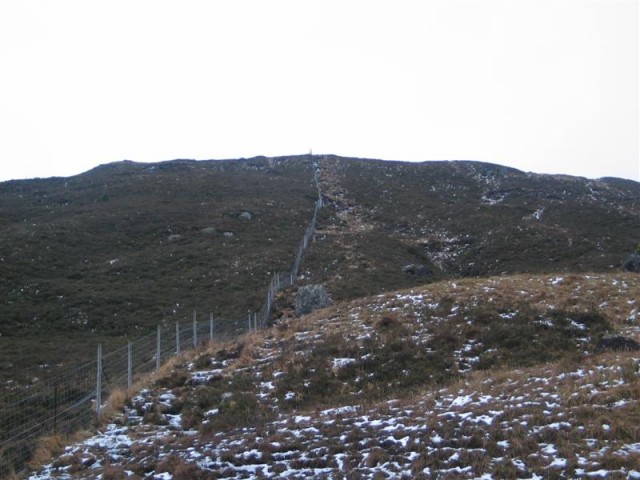 Over the stile this is followed by a grim boggy trek through the trees, before things become better down to a forest track then a final lovely path through the trees back to Polldubh. An excellent day out with many different points of interest, highly recommended.

Hi,
Enjoyed the write-up.
We did this walk in reverse, a couple of April's ago, with very similar weather.
That bit thru the trees and onto the ridge of Mullach was awful but the rest of the walk makes up for it.
Stob Ban is a wonderful mountain and that rocky bit on the NE ridge can be a bit tricky when iced.
We got to the top just a a very heavy snow shower hit. Made the descent a bit awkward to find. A case of trusting one's compass.
I agree, a great walk, especially when the snows down. The Ridge between Stob Ban and Mullach nan Coirean. April 08

Fantastic winter outing! Winter visit to the Stob Ban ridge is on my to do list.