g41.gpx Open full screen  NB: Walkhighlands is not responsible for the accuracy of gpx files in users posts
I was intrigued by descriptions of this mountain, tucked away out of sight as it is. Poring over the 1:25000 map showed a couple of named gullies that I thought were worth a look, although I hadn’t been able to research what they might be like. I headed up the track into Gleann leac na muidhe, taking the path around the cottage as requested on the sign. 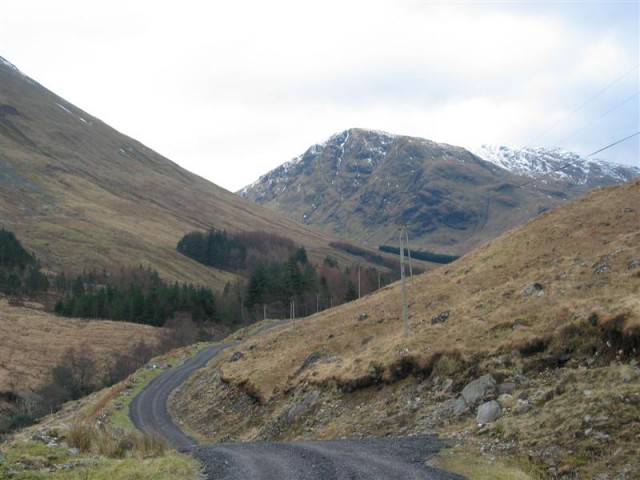 track at the start

There is a path at the end of the track, this gives a steady ascent near the burn. I found this path to be a delight, giving great walking through varied terrain, sometimes in the gully right next to the burn which would be fun in spate I imagine! Little twists and turns and the first proper view of the mountain – and how good it looks, rugged and snow covered. The terrain opens out and the burn continues in a trench nearly all the way to the north-facing cliffs. I could clearly see West Gully but not the other gullies to the east so decided to explore that way. West gully on the right

I was in no rush to move on from these surroundings. So I climbed to the east, reaching the foot of steeper ground. It all looked magnificent; snow, ice and frost covered, but not for me today – too many unknowns. But I will be back. the eastern gullies and cliffs

So back to the west; under the cliffs again and to the start of West gully. I climbed steeply up the turf for a short way, quite difficult, then found a flattish place to stop for lunch and a good look at the gully feasibility and condition. There were animal bones next to me where another creature had had its lunch! I couldn’t see any difficulties, the gully narrowed in a couple of places but the top section wasn’t visible nor could I see if there was a cornice. On the way in though I’d seen that the gully ended below the ridge and no cornice was apparent. So, go or not? I chewed this over with my lunch, the gully becoming spooky and atmospheric as mist drifted down it.

Crampons on, bag packed and on the back, two ice axes today. Onto the snow and it felt great, I’m at home in this, it feels far more secure than boots on the turf! on my way up

On my way now, I kept to the left side of the gully and steadily gained height. The snow was fairly soft and it was easy to kick steps. Past a large rock and into the narrower part of the gully, I stopped to look back as I like to do. 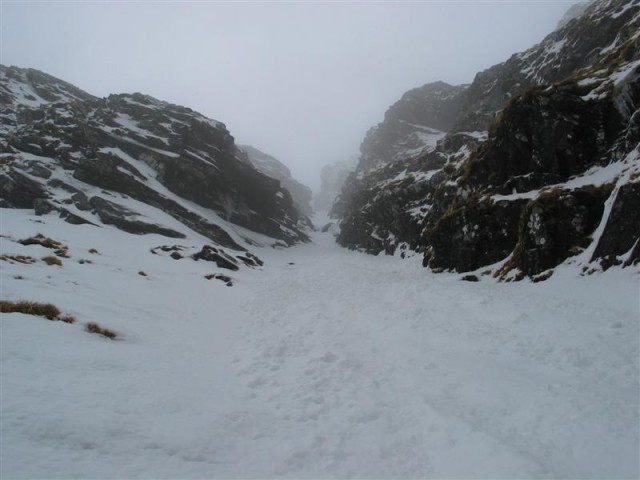 Up to some vertical rock on the left, there are icy rocks on the right. Round the corner where the gully steepens and narrows further. Up to a very narrow section between boulders; a small waterfall in summer no doubt. This was ice covered but was at the same angle as the rest of the slope. A step up was required to start; picks into the slope above and a foot onto a small projection in the rock on the right did the trick. The gully opened out a little then became less steep, the view back from here over the lip was grand. the slope relents, looking back

In a wider part now but the gully narrowed ahead, no apparent difficulties. More excellent step kicking to the next narrow section, I didn’t like the look of the snow here so moved over to the right side of the gully. I stopped here for a few minutes to have a bar of chocolate so stamped out a good ledge at the base of a rock, it gave another good view down. 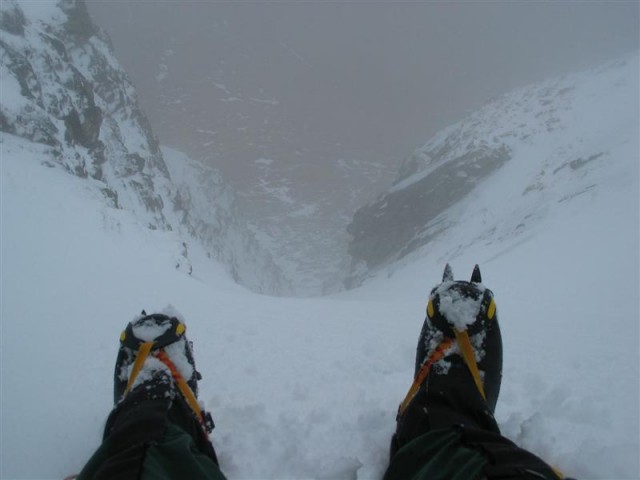 a great place to stop for a bite

On again, I kept to a rock ledge on the right. This was ice covered beneath the snow and was good going. Back into the gully proper, still narrow and with an overhang on the right, what a great place! Ahead I could see something different however, up a couple of small ramps and I was at the foot of a vertical section. This was the part I hadn’t been able to see from below. It was another narrow part, about 3 metres high, ice covered, crowned with iced vegetation. I had a quick look to the right, it might be possible to get to a snow covered ledge and around but in doing this I’d be over a drop back to the gully. No. A higher vertical wall on the left. So I stamped out a small platform at the foot of the ice, a deep hole appeared beneath my right foot. Not good. The left foot was secure though, another quick look and I decided to cut a few steps in the ice. Low down on the right, higher on the left, on up then a couple at head height. Ice chips in my face made me laugh. Both picks whacked securely into the ice above, onto the first step and then up in a few seconds, easy and fun.

Above this section where the wind had got to the slope it was covered in harder snow so back to front points for a while, then the angle eased and I was on the ridge. A final look down this great route. 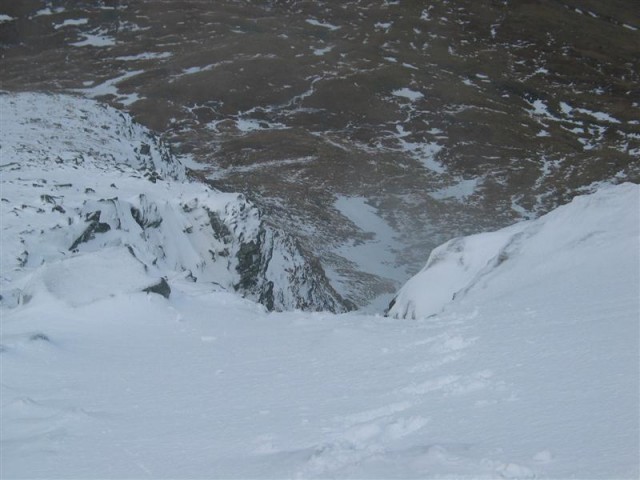 It was a shame that the cloud was low but I could just see the rocky route ahead as I made my way to the summit, following the line of old fenceposts. view to the west

The cairn is situated on the edge of the cliffs and care was needed around the cornice, I carried on past the cairn a bit for a view down the other gullies. just east of the summit

Originally I’d planned on carrying on over Stob an Fhuarain and Aonach Dubh a Ghlinne but my exploration below meant it was now getting late. I retraced my steps to the west then headed down the slope to the north, keeping just a little way left of the old fence. This is steep ground and involved route finding through rock outcrops, tricky in places where the soft snow was sliding away. The setting sun, below the cloud, gave some good colours that the camera failed to capture properly. sunset and the steep descent Down on flatter ground I picked up the pace in order to cross the burn and gain the path before dark, and just made it. I stopped for a snack and drinks as the stars appeared; the cloud was breaking up now. As usual for me I was in no hurry in this setting, eventually on with the headtorch and a marvellous walk down this excellent path to end a brilliant day. This turned out to be a mountain that offers a great deal of variety, scope and character along with a great walk in. Highly recommended.

At home I looked up this gully on the interweb, there wasn’t much but I did come across the blog of Glencoe Mountaineer Alex Roddie – his site here
http://glencoemountaineer.blogspot.com/
Alex climbed the gully a couple of days later so had some useful descriptions for me. Turns out that it is a winter grade II climb because of the couple of ice pitches, so a good step up for me from Grade I to date. One minor point, this site shows Sgor and the OS map Sgurr - which is it I wonder?

If you ever want someone to join you up gullies give me a shout!

This is my favourite mountain in Scotland and the West Gully is a great little route. Myself and Hugh O'Kane climbed this in 1992 or 93, great conditions. Next year I did Vixen Gully, that was wetter and less pleasant. Your report and pictures brought it all back. Thanks.

Not for me, I doubt, but really enjoyed your report and pictures. Raised my pulse a few beats! I remember getting into a minor pickle coming off this one, so know what you mean by the security of snow v turf.

Good work! Do you have an image showing the route? Very interesting climb.