Day 3 (Friday) of our Glen Nevis adventure, and the forecast was looking good for the day at least, it was to be crap the next day, the day we'd planned to go for The Ring of Steall. Michael was hoping to join us later on the Friday, but phoned to say he wouldn't be driving up from the Borders to be rained off on Saturday! Anyway...Neil and I decided to try for The Ring while the weather was this good, so off we went!
We parked at the Lower Falls and walked along the road towards Steall Falls. The road to Steall Falls, with Meall Cumhann at the back and Aonach Beag (?) behind that! 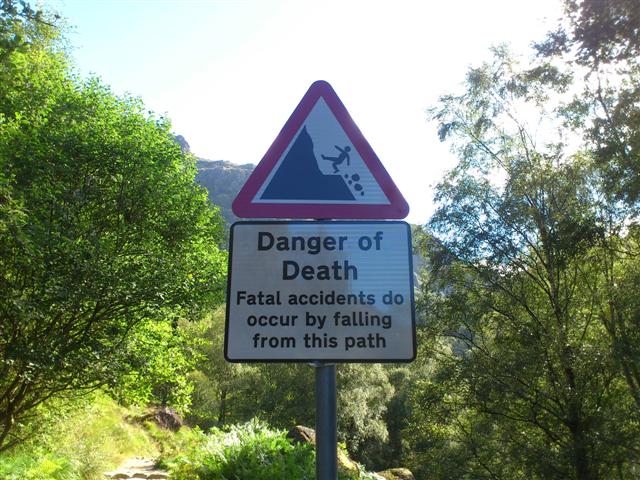 Should we turn back now?? Na!! 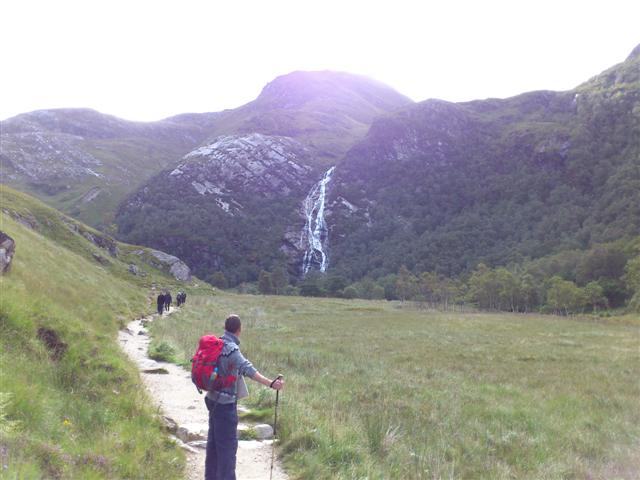 We reached the wire bridge, and decided to leave it ( I cant swim and the pool looked REALLY deep!) and cross the river by wading across at a shallow bit. Where we crossed the river, nice and cool! 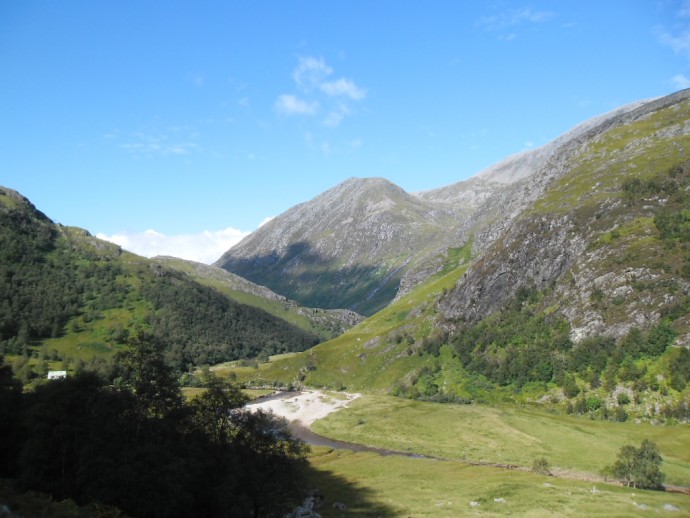 Looking down the gorge to Carn Dearg. A long way down!

The steep path zigzags up An Gearanach and is quite eroded in parts, and reaches a grassy area where we could see the days walk ahead of us, and looking back across the valley we had excellent views of Ben Nevis with Carn Mor Dearg just to its right. 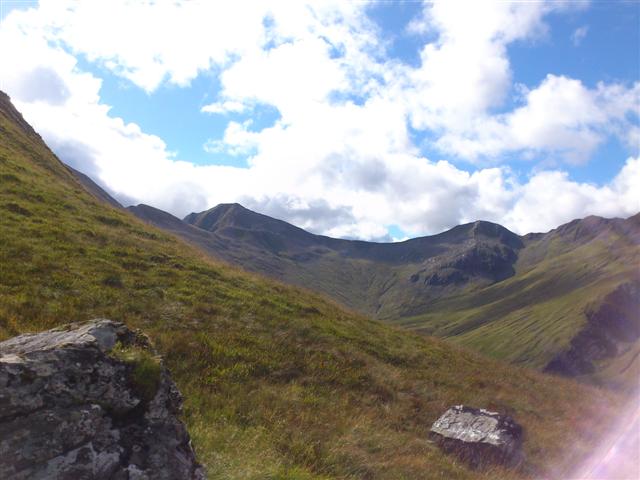 Am Bodach and Sgurr an Lubhair lying ahead. 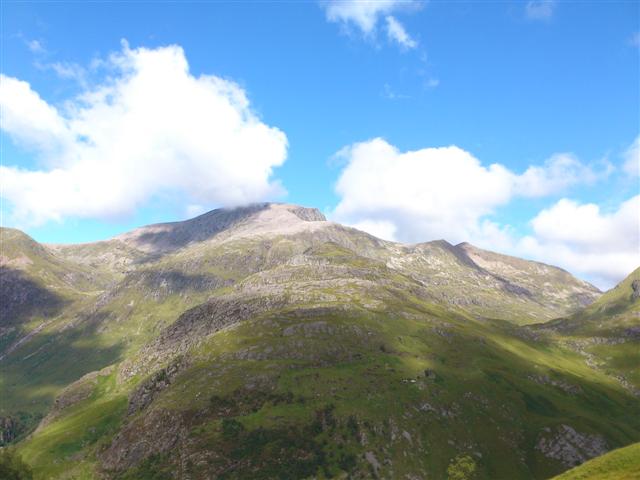 Looking up the valley with a pointy Binnein Beag on the right.

We continued up the path to the summit of An Gearanach where we stopped for a breather and to have a look at what lay ahead. 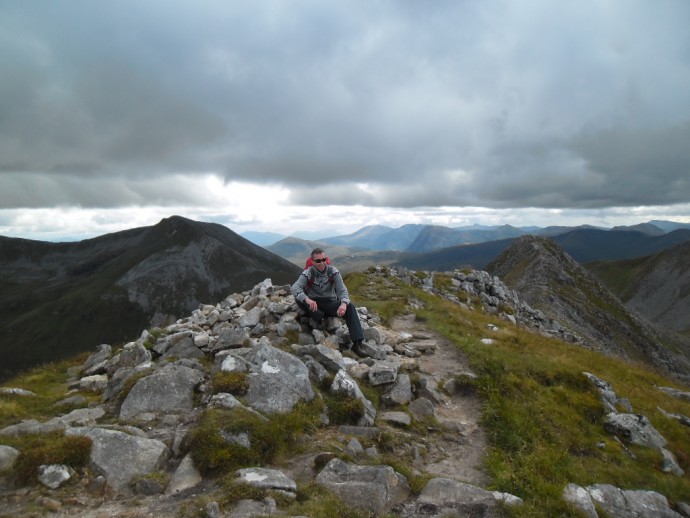 Neil at the summit.

While we sat, we were passed by a walker who we'd noticed a wee bit behind us on the ascent, and a few minutes later we were joined by a couple of his mates who asked if we'd seen him. We found him having a cuppa just along the path, and they explained they'd come up from Glasgow that morning with the intention of doing the Ring, so, as a group we set off along the narrow ridge to An Garbhanach. The narrowing path to An Garbhanach. 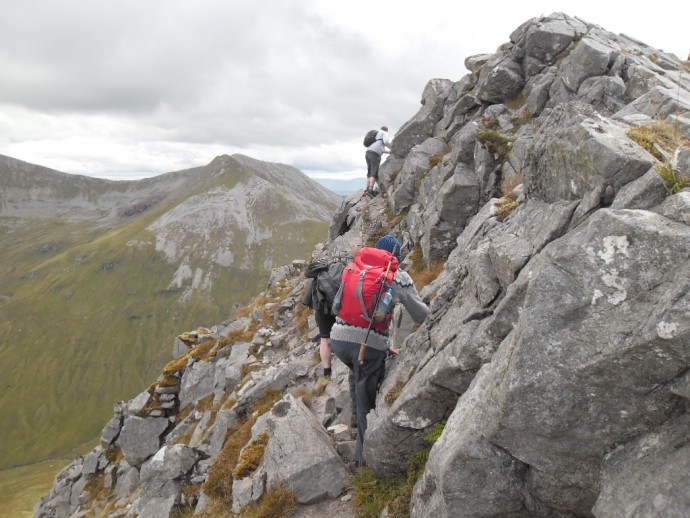 Nearing the top of An Garbhanach.

I have to say that I was starting to get a bit nervous by now as the path ahead seemed to disappear among the rocks, as we approached the summit of An Garbhanach one of the other guys, who'd done the Ring before, had gone ahead and was standing on a pretty non existent path with a big drop, encouraging us to join him! Two of the other guys declined as they didn't feel safe, and that was enough for me, and was with a sense of relief , for me at least, we retraced our steps back down. 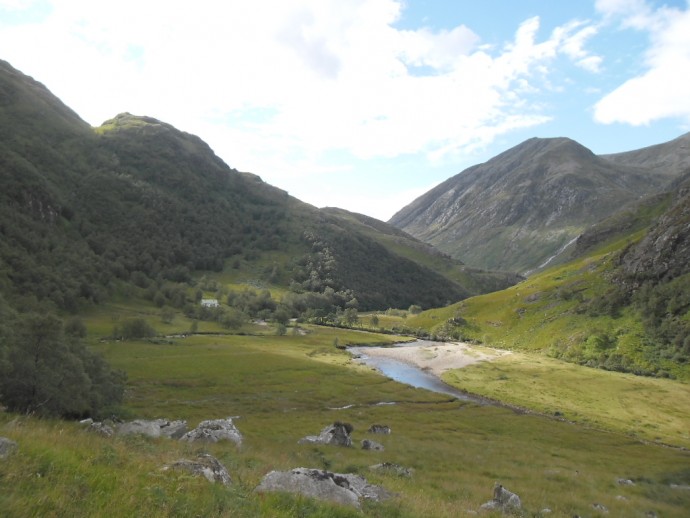 Back on the level.

Once down, a began to feel really annoyed with myself for not at least trying to get further, and I vowed to return and complete what I'd started...roll on next year!

Re: Losing my nerve on The Ring of Steall (Glen Nevis/Day 3)

When you don't feel safe is always the right time to turn back.