Seals, sun & sand: along the beach to Dunrobin Castle

Seals, sun & sand: along the beach to Dunrobin Castle

One last walk on our way back from Caithness to Aberdeen this summer - and it didn't disappoint. Wildlife and stunning views everywhere we looked.

We drove through mist and patchy rain from Helmsdale to Brora - it was still murky and drizzling as we laced up at the beach car park in Brora, and didn't look like it was going to clear any time soon. But I'll leave the photos to tell most of the story...

Onto a narrow, sandy path, pushing back sodden grass blocking the way at knee height. A slug had climbed right to the very top of an exposed branch before realising it was a dead end... Five minutes into the walk and we were onto the beach section. The cloud suddenly lifted, revealing the first of many magnificent views today. 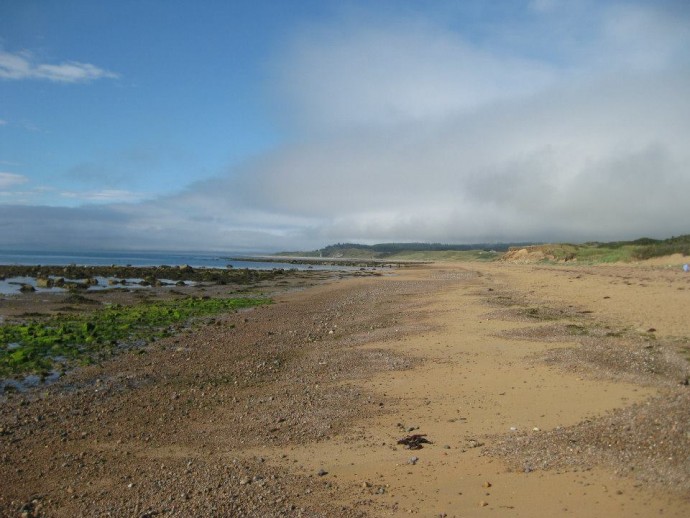 We could see a lot of large boulders scattered around the shallows up ahead. As we approached, we realised that they were covered with dozens of seals! We'd never seen so many close-up before. And there was no-one else around to have to share them with. After a good deal of photos, we left the colony behind, and thought that would probably be the highlight of the day behind us. But further on up the beach, first we just saw evidence... flipper marks on the wet sand... 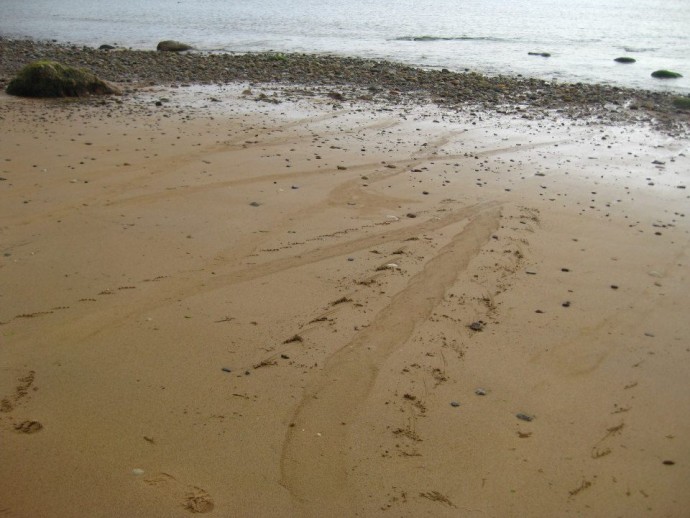 ...but then a quartet of them, right up close, including what looked like a pup. They didn't seem too bothered by us, but we didn't try to go any nearer. Leaving the seals behind after lunch, we immediately took a wrong turning and got slightly lost in a very boggy patch of grass, nettles and thistles. Don't ask how this happened when we were just supposed to be following the coast. But we were soon back on track and approaching Carn Liath Broch. This has to be a much better way to access it than by the awkward track coming down off a layby on the busy A9. From the broch itself, the views were superb. Low cloud still shrouded the hills inland, but the Moray Firth was free of cloud. Away from the broch and towards a slightly more modern structure - the majestic Dunrobin Castle, which looks like it comes straight from a fairy tale. Just a word of caution - lots of cows were roaming freely on this section, which is enclosed between sea and shrubbery and might prove tricky with a dog if you're unlucky. We left the walkhighlands route here and ascended into the castle grounds, past some sort of memorial. The paths around here looked like they were being improved, with lots of new drainage ditches and surfaces etc. All of a sudden we left the tranquil forest and Dunrobin Castle loomed large ahead - completely surrounded by coaches and cars. What a change... We duly paid the entrance fee and went for a tour of the castle. The ancestral home of the Sutherland family responsible for many of the Clearances, this is a controversial place, but admittedly a fantastic visitor attraction today. No photos of the castle interior, but some of the beautiful grounds, with the sea sparkling behind. It was absolutely roasting by now - we could have been in southern France. The architecture would've been more appropriate too! 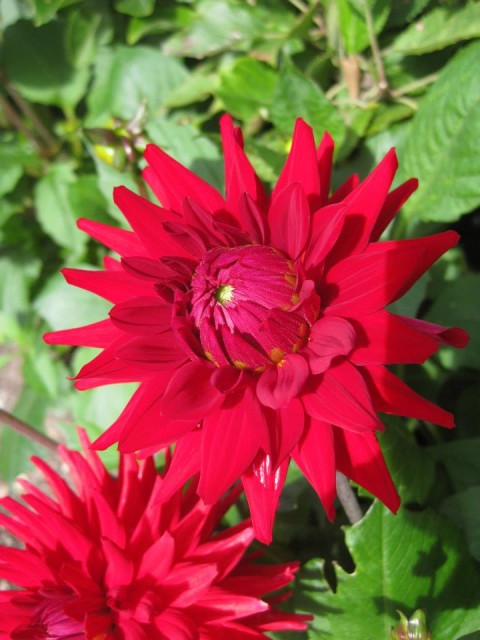 After whiling away time in the castle, gardens, museum and generally enjoying the weather, it was nearly time to continue with our walk to Golspie. But first there was just time for an entertaining falconry display, featuring a whole load of birds of prey, and some unsuspecting audience members. One of the highlights was when a peregrine falcon was unexpectedly joined in the air by a wild one! Apparently it had come down from nearby Ben Bhraggie. Finally, onward through the forest on pleasant paths towards Golspie, eventually back onto the walkhighlands route, and arriving in good time for the train back to Brora - in fact with time for an ice cream in the village centre. Amazing the amount of variety on one walk in this neglected corner of Scotland. Seals, birds of prey, cows, brochs, castles, gardens, woodland, beaches, fields. I didn't even mention the waterfall near Brora. Certainly a walk to be recommended!

Re: Seals, sun & sand: along the beach to Dunrobin Castle

Looks like a nice coastal walk, I was at Dunrobin Castle a couple of months ago but never saw much of the surrounding area. Falconry display was fun though.