An early start this morning so I could be walking by 8am.

A few more clouds in the sky than I was expecting, another surprise was the gradient of the track heading sharply uphill through the woods before reaching the open hill. Car parking opposite the quarry entrance 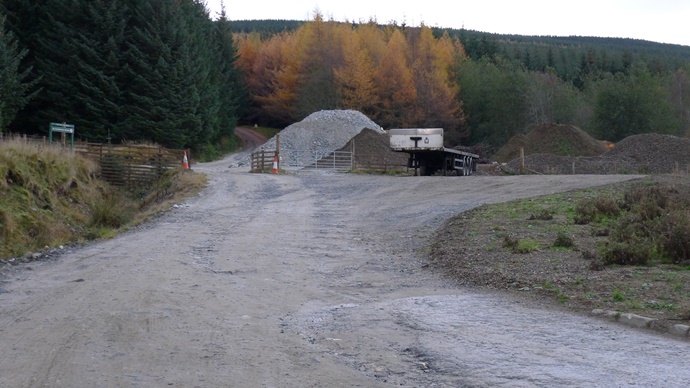 It took me 25 minutes to leave the woods behind and once in the open the track became frozen with a thin layer of snow on top - really slippy from here on. The gradient was now easier as the track headed towards Meall Tairneachan. I was watching out for the metal pole which marks the point where I would leave the track but when I got there I decided just to carry on and do Farragon Hill first and leave a short climb up MT for the way back. quarry track with MT on the right Farragon Hill in the distance The drop down to the quarry was lethal with the sun still below the level of the hills, I was amazed to stay on my feet as far as the quarry and just as I was starting to congratulate myself as I wandered round the south side of the quarry I missed a patch of ice and as soon as my left foot was planted I was off

After the quarry the track turns grassy ands climbs again before another drop down as the track disappears altogether. Looking at Farragon Hill and the ground in between I decided to head over to the right and head for the higher ground to the South. There were some fairly damp patches but not too bad with the frost helping to firm up some of the bogs. I could see an obvious shelf running from left to right so just headed for it. This took me round to the south side of the hill and left a short climb to the summit. Looking down on Lochan a Chait

After a few minutes at the summit I retraced my steps back to the track again keeping to the higher ground to the south. After some heather bashing it was back to the grassy track and a steep climb up before a descent back to the quarry. Once back at the quarry the sun had risen above the level of the surrounding hills so the south facing track had improved and made for easier walking although it's a steep climb back up the hill after the quarry. Track above the quarry

After the quarry it was only 5 minutes to reach Meall Tairneachan. I knew I needed to head down to where the metal pole was situated next to the track but as there was someone else heading up the steeper side of the hill from the high point of the track I decided just to follow him. A tiny little bit of scrambling required and very quickly the summit was in view. It's only a 5-10 minute climb from the track to the summit. Summit of MT with Schiehallion behind All that was left now was the track back down to the car and with it being in the shade the whole way it was a slower finish than it would normally have been.

Really nice day once the clouds disappeared and the sun came out with great views of all the snow clad hills in all directions. A bit unusual to walk through a quarry but with it being a Sunday it was nice and quiet with only a couple of guys on site doing some maintenance.