Here is a short run down on our 5day trip we had on the Isle of Arran on the first week of November 2013.
We booked a 5day stay outside Corrie at a place called the Steading, ideally located for all of our needs for the duration.
This turned out to be a fabulous cottage in many ways and was a massive factor in making this one of our best holidays ever.
The Trip
Had always planned on doing all 4 in one hit, but at this time of year it was always going to be a big ask. Also as it was near 8am when we arrived at Glen Sannox I kind of new that it would not happen on this day.
The plan was to start with Cioch na h Oighe to reach Goat Fell, then back to North Goat Fell before dropping down to the Saddle. From there we would ascend Cir Mhor, drop down to the A Chir bypass path and carry on to Beinn Tarsuinn. We would then return to the foot of Cir Mhor and take the fork in the path and traverse the Hunters ridge to reach Caisteal Abhail. And finally take the NE ridge over the witches step and onto Suidhe Fhearghas before dropping back into Glen Sannox.
What we actually did was change our mind on the way in due to the frosty conditions. Cioch na h Oighe looked pretty intimidating, it looked very steep. And with the frozen conditions and the wind picking up we changed our minds.
Suidhe Fhearghas it was, at least this way we would reach the witches step earlier on, rather than the end of a long day. The only problem being, the frost on the witches step at this time of day would be a tough ask for us.
Well we all made it to the witches step relatively unscathed. I had a look down to try and get a view into the gap and BOTTLED it. I don’t think the dogs would have made it down or me for that matter. So we dropped down to the North just back from the top of the step. Still affair bit of scrambling was involved before we made it into the gap. From the Gap there is still work to do before you can claim the summit of Caisteal Abhail.
We then took Hunters ridge to meet the fork in the path at Cir Mhor. Cir Mhor would have to wait a bit before we took that scalp as our objective was Beinn Tarsuinn via the A Chir Bypass path.
Once we completed Beinn Tarsuinn we would head back along the Bypass and Climb to the summit of Cir Mhor. Easy climb from the SW to the summit, we always knew that the descent to the Saddle would be the tricky bit.
We had to decide whether to try and do Goat Fell or make our exit at the Saddle and back down Glen Sannox!
We decided on reaching the Saddle to head for home due to failing light. We might have had time to reach Goatfell and may have got down off the summit a bit before head torches would have been needed, but we didn’t. On the day it was the correct decision.
Head torches were needed once we got off the steep ground from the saddle. Enjoyable walk out of Glen Sannox was had; we enjoyed it so much we missed the bridge on the way out and ended up having to make our exit via the golf Club. 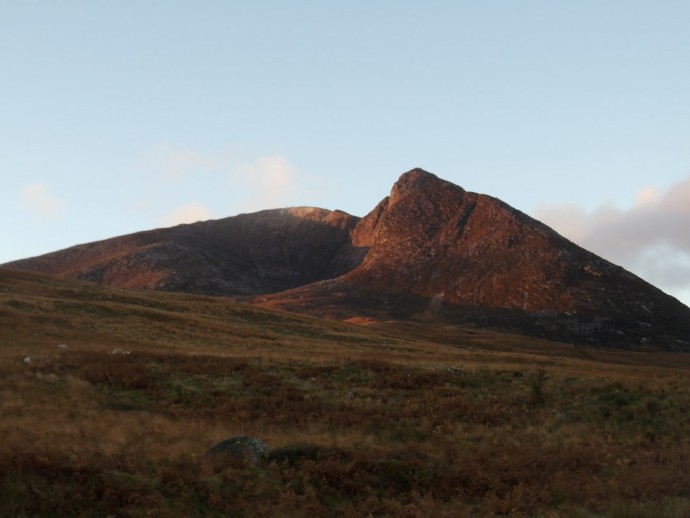 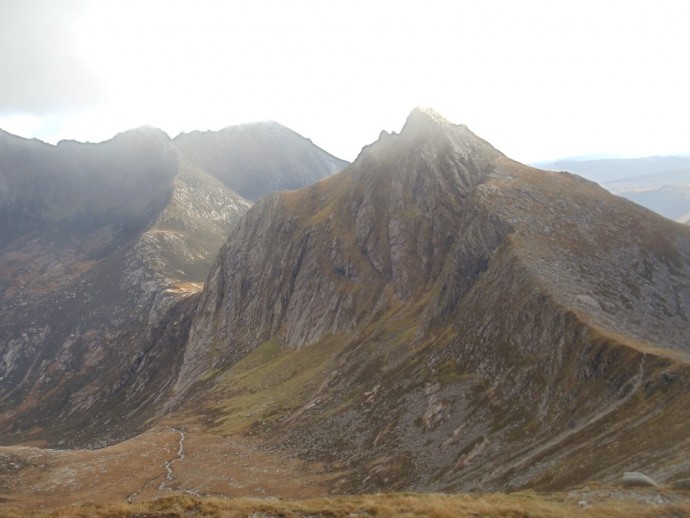 This was a tough route for us, the dogs included. The next day our upper bodies were pretty sore and stiff, and the dogs were feeling it as well. This was very noticeable the next day when we did Goatfell the dogs very rarely left our sides, and tried at every opportunity to conserve their energy.

Cant wait to get back to Arran.

Nice to see yous back out and climbing some moontins

Always safety first so no shame in bottling it, think we've all been there.

Arran is lovely, it's also great for cycling.

Glad you enjoyed the corbetts as they're fab.

Great walk, i wondered how you would get on with The Witches Step, glad to see there`s a safe way around it !

davetherave wrote:This was a tough route for us, the dogs included. The next day our upper bodies were pretty sore and stiff, and the dogs were feeling it as well. This was very noticeable the next day when we did Goatfell the dogs very rarely left our sides, and tried at every opportunity to conserve their energy.

Cant wait to get back to Arran.

. A good effort this in one day

- that's a big walk at this time of year, even without the scramblier bits of the Witch's Step - definitely no shame in having avoided that!
Nice photos, too.

well done dave. tough old walk for the dogs this.

Super day you got. It's a great walk this, one of the best.