Craigendarroch must be one of the most well-known little hills in Aberdeenshire, but surprisingly we'd never climbed it before this summer. A sunny, breezy Sunday afternoon seemed like a perfect time to set this right.


craigendarroch.gpx Open full screen  NB: Walkhighlands is not responsible for the accuracy of gpx files in users posts

Ballater is a lovely, obviously well-off little town - today it was absolutely full of tourists, numbers perhaps boosted by the close proximity of the Royal Family up the road at Balmoral. We had a poke around the small railway-station-converted-into-museum (at £2 you can't really say no), then set off along the route of the road to Braemar, soon turning right. Immediately the crowds were left behind, and residential streets quickly gave way to woodland.

Craigendarroch is shaped like a Christmas pudding - flattish on top but steep at the bottom - so our legs were quickly put to work. It was a warm day, but the oaks surrounding us provided plenty of shade, with a number of benches and information boards on the way providing excuses for a rest. Branching right at a signpost, before long we were at the top, gazing down on Ballater. The full force of the breeze more than made up for the lack of shade. We've done several other walks in the Ballater area, and it's interesting comparing their relative merits. Nearby Sgor Buidhe is probably the best viewpoint, particularly for its views of Lochnagar. Craig Coillich on the other side of the valley perhaps has the best views of Ballater itself. But Craigendarroch looks the most impressive from the base, and it's special for its more immediate surroundings - the terrain underfoot and oakwoods around, and the heathery summit complete with perfectly-positioned bench. Relatively luxurious for a sub-2000... 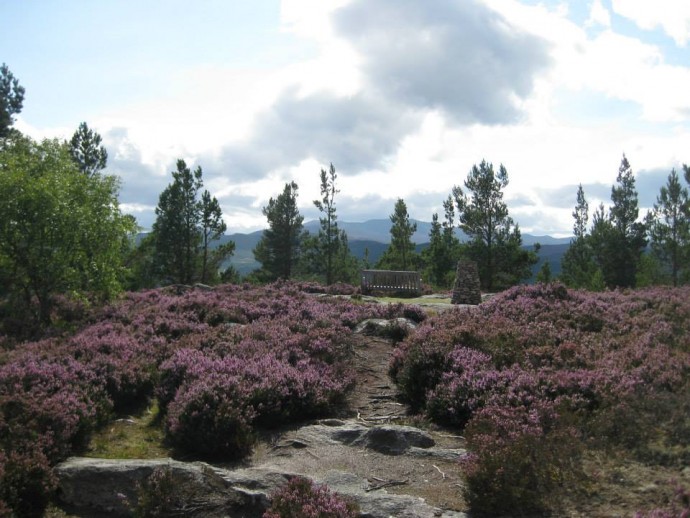 The far side of the hill shouldn't be missed either. We descended on a much narrower path down the back from the summit, zig-zagging then traversing the side of the hill. The sound of cars traveling through the Pass of Ballater below echoed off the sheer rock walls of the other side of the pass, where climbers were picking routes up the cliffs. This section of the walk is narrow and north-facing - atmospherically it was completely different from the sunnier route of ascent. We also came across this bizarre plant sitting on the path, presumably broken off from a branch. Can anybody itentify it? Eventually the path completes the loop around the hill, rejoining the route of ascent near the bottom. This is a decent, varied and short walk. Ballater is unrivalled in NE Scotland as a walker's base if you don't have a car (and aren't a bagger) - so many lovely walks which start right in the town centre.