A Mungrisdale Circuit in the snow

A Mungrisdale Circuit in the snow

A family party meant just a 4 hour kip before heading off on my 1st Lake District walk since the summer. I kept the alcohol intake to a minimum in order to take advantage of that rarest of things in the Lake District; a fine November forecast.

The walk started at the little village of Mungrisdale. It's just off the main A66 road, around 10 miles beyond Keswick. This tiny little place is nestled beneath the fells of Bowscale Fell and Souther Fell, the day's start and end points.

I knew on Saturday that Skiddaw had a fine layer of snow on top, having spotted the white stuff from a distant Workington. I was shocked at arriving in Mungrisdale to find an extensive coverage at the top of Bowscale Fell too, given the much lower altitude. It was going to be an interesting walk today, and a first ever winter outing on the fells.

The route starts just round the corner from the church. It's not clear in the Wainwright guides just how to access Raven Crags and climb up into Bowscale Fell's east ridge. We eventually settled on the gate into the substation enclosure, and another gate out of it. The path up onto Bowscale Fell is obvious from here, but the 1st section as steep as it comes. Once onto the ridge proper the gradient eases dramatically, but it was here, at a relatively low altitude (sub 1000ft) that we encountered the 1st dusting of snow. The ridge the climbed again over the 1st undulation and once past that we had a full covering snow around 1-2 inches deep all across the fell. Bowscale Fell is something of a whaleback and it's a long slog to the subsidiary top, especially in snow. The wind along this section was pretty stiff and given the coldness of the morning it was enough to almost cut through my Polartech fleece. We eventually, after much tramping through snow, arrived at the summit of Bowscale Fell.

The scene ahead of us was something else. Bannerdale Crags looked equally as inviting and also covered in snow and Blencathra ahead was majestic and looked more Alpine or Himalayan than Cumbrian on this fine wintry day. We took or photos at the cairn as the summit, even though the wind shelter was the highest point and we passed pleasantries with a few other walkers who were equally delighted by the surprise snowy outing.

It wasn't long before we were on our way to Bannerdale Crags and the snow seemed to be a blessing, judging by the general bogginess of this col. The snow and frozen ground mitigated the bog almost entirely and it made for relatively easy walking. This part of the walk was mostly spent gawping at the spectacular Blencathra and we could clearly see some folk attempting Sharp Edge.... are they mad? (more on this later).

Bannerdale Crags was duly reached and after some consultation of the map, we figured the best way to Souther Fell was back the way we came, before
dropping down to and following the contour path around the base of Blencathra and onto Mousthwaite Comb. Following the Blencanthra side retained us a some of the height and we emerged on the col, rather than at the bridge over the River Glendermackin. It was a little longer, but allowed us to stop for lunch in the sunshine at the head of the valley and provided some interesting walking. The path was a little icy and microspikes could have been usueful, but it was passable with care.

I promised you more on Sharp Edge. It was on the path near the stone staircase to Red Tarn that we passed not 1, but 2 groups of walkers, who asked if we had done Sharp Edge, and asked if we though it would be passable. Given the difficulty of staying upright on this basic path, we pointed out that it might be a bit dodgy and should probably only be attempted with the right kit. I never saw an ice axe between them, and god knows if they had crampons. Nobody died that day anyway, so they either thought better of it, or were competent enough to traverse it in the winter conditions. Madness.

Anyway, after our amazing wintery walk, we reached the non-snowy Souther Fell. It's much lower than the other 2, and is basically in our way, so it seemed stupid not to climb it. It turned out to be perhaps the most featureless and pointless bog infested fell I have ever climbed on. The summit ridge had no easily discernible summit (or summit cairn). The only thing of note seemed to be some kind of cairn marking a viewing point (which wasn't even the best anyway as Sharp Edge is obscured from it. We raced over this slightly rubbish fell and down the steep descent back to Mungrisdale.

The exit route from this fell is not the clearest either. There is a waypoint near the bottom directing you down through bracken to the wall, marking the edge of the no access field. We turned left here (should have went right). This brought us to the top of the field of no access, but wooden part of the fence was easily climbable, so we hopped over, legged it to the cover of the trees and hoped over the gate outside the The Mill Inn. I have to say, that such access problems really go against anything the National Park stands for. The harm of creating a right of way across "their land" at the boundary of the field, rather than simply creating on obstacle like this is counter productive. I managed to cross the field in seconds without causing any damage. Very annoying really.

The day was capped with a quick pint in the Mill Inn and back home to bed, to catch up on that sleep.

Raven Crags at the foot of Bowscale Fll 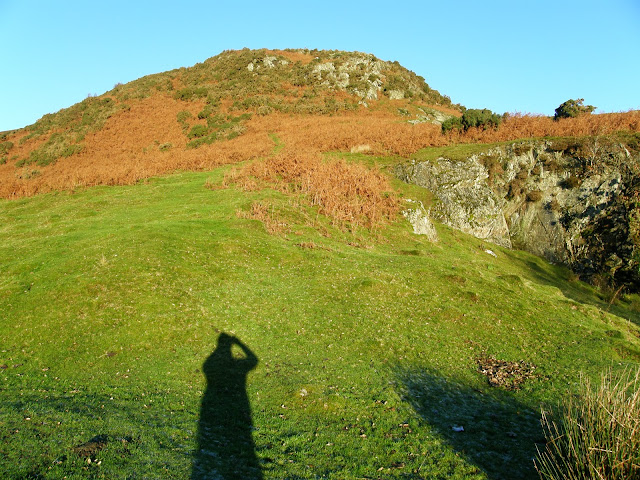 The Tongue and Blencathra behind 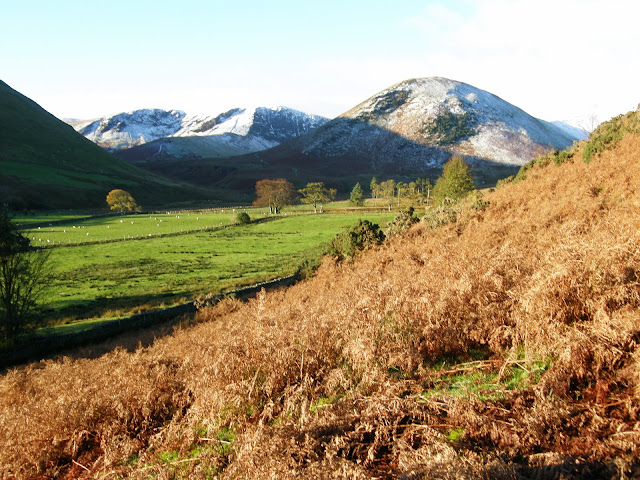 Once past Raven Crags the snow became apparent 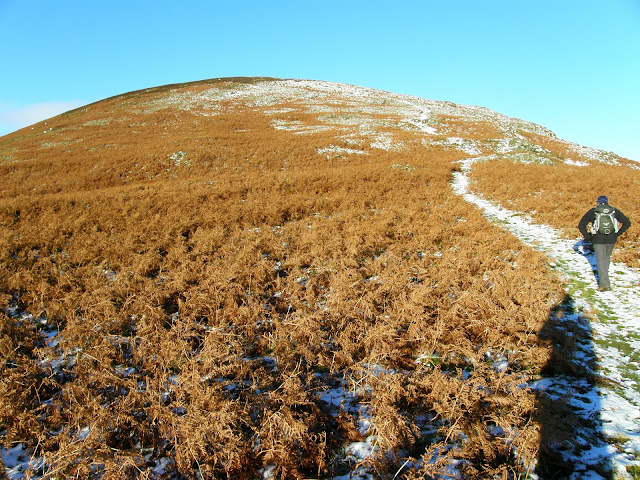 A distant and moody Blencathra 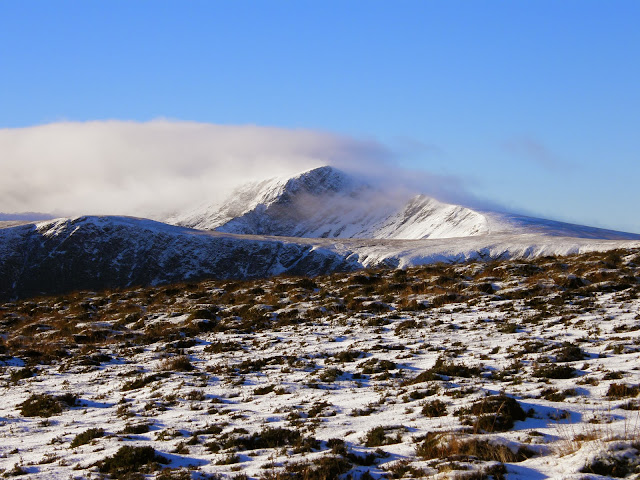 Up onto the main ridge towards the subsidiary top 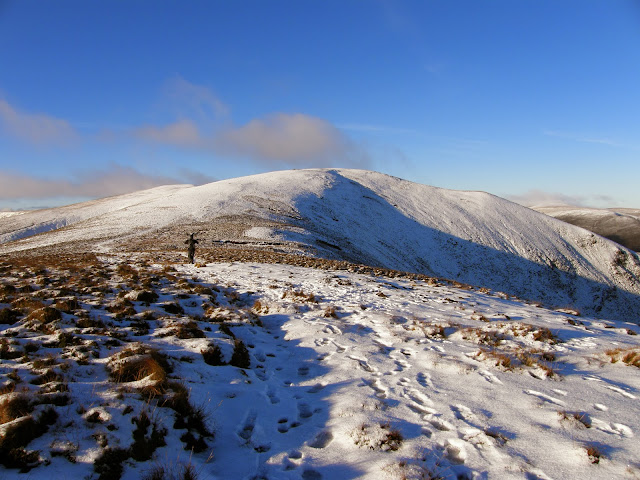 It's getting very snowy underfoot 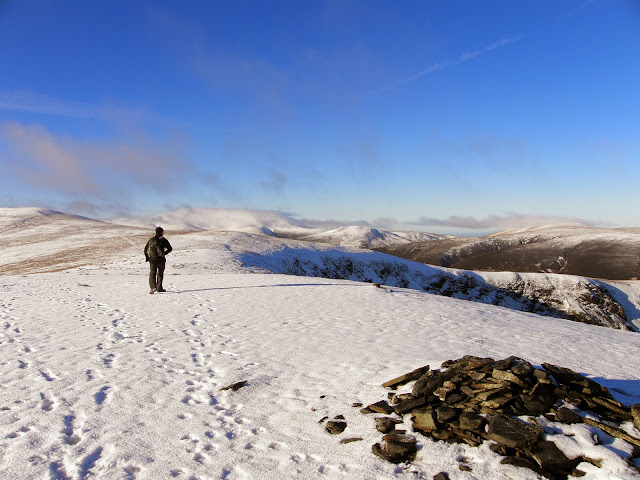 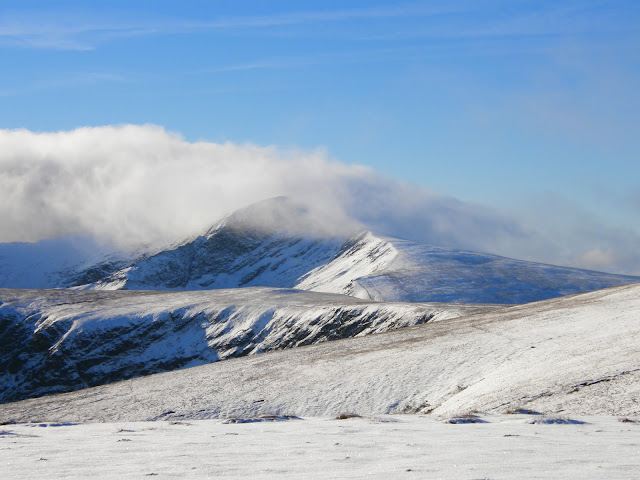 A look back down Bowscale Fell's east ridge. The Pennines are far in the distance. 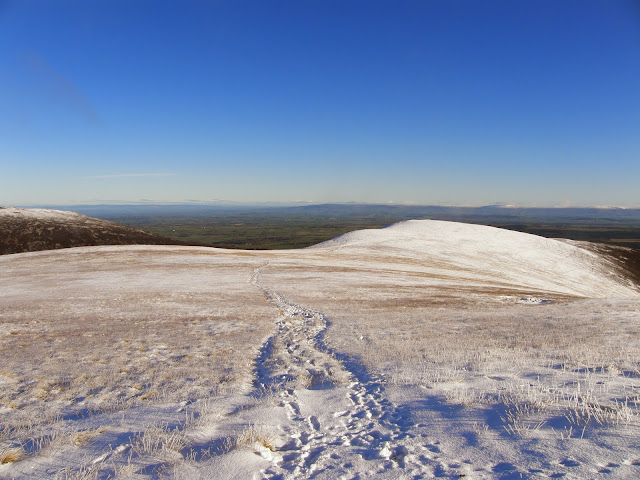 The "not-quite" summit of Bowscale Fell 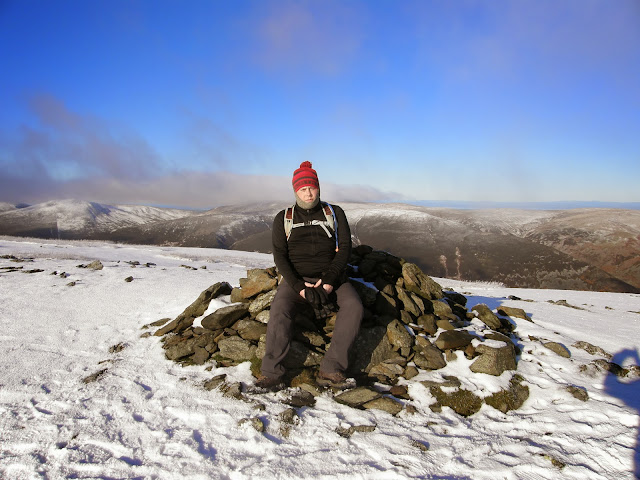 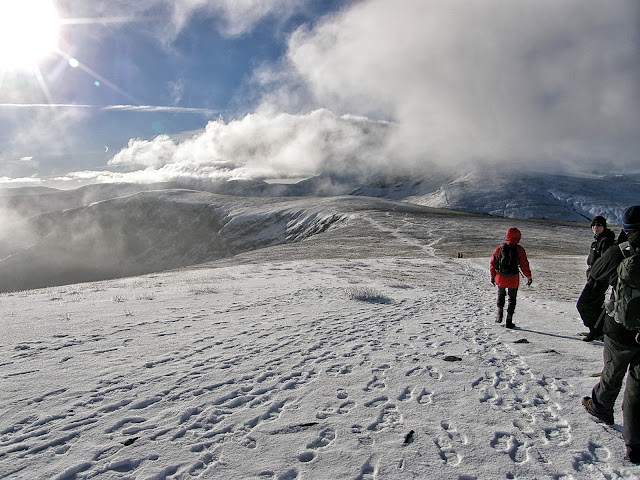 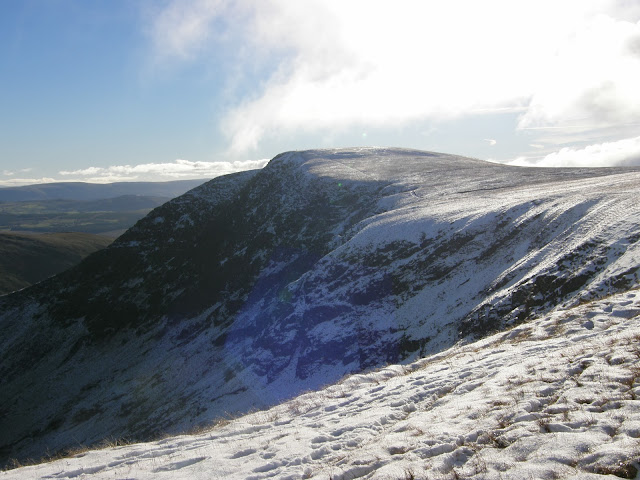 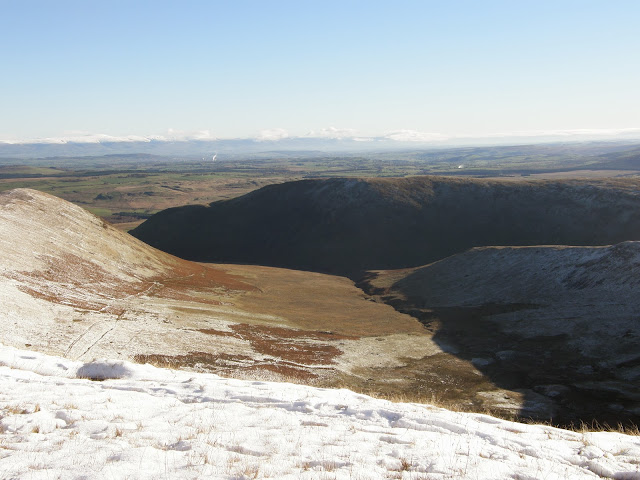 Looking back to Bowscale Fell 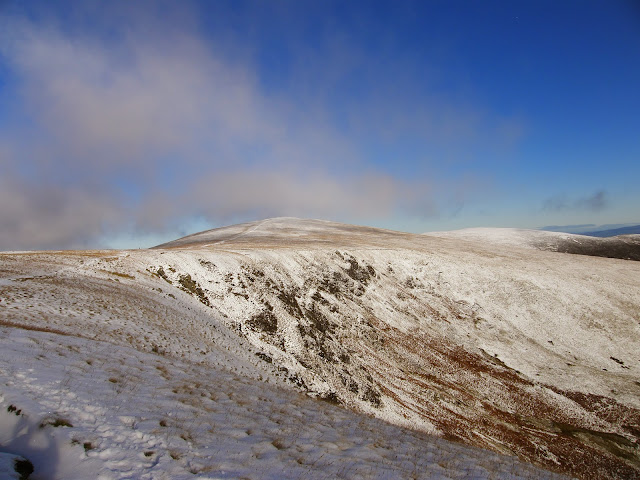 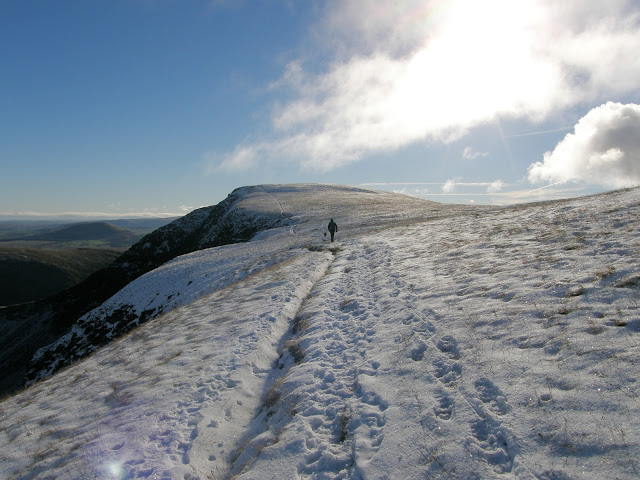 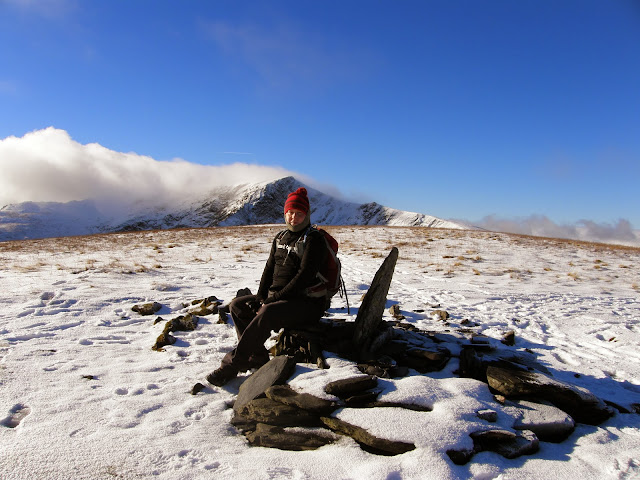 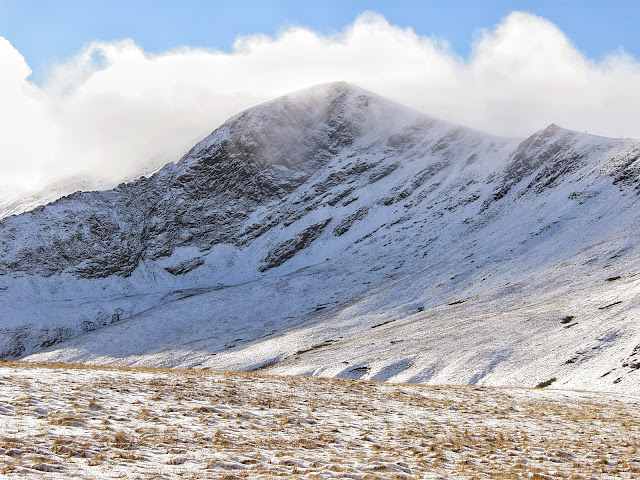 Our way forward to Souther Fell 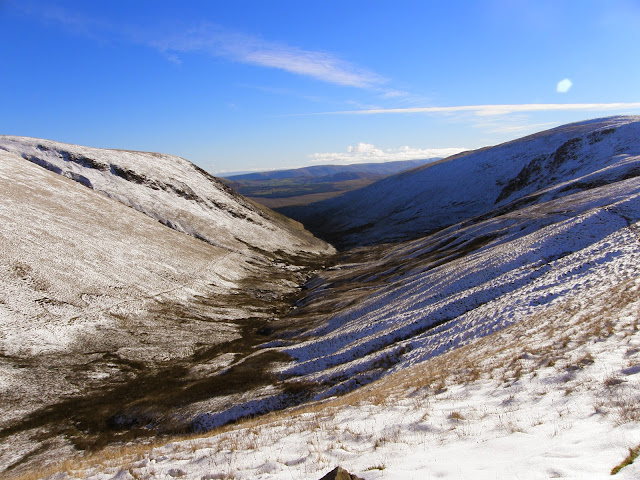 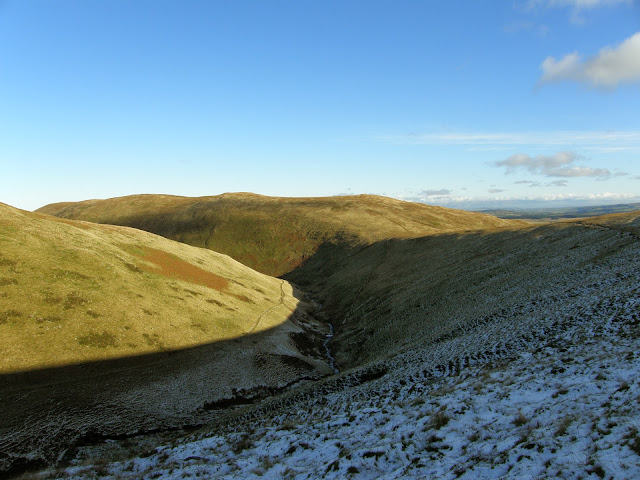 Sharp Edge from near Mousthwaite Comb 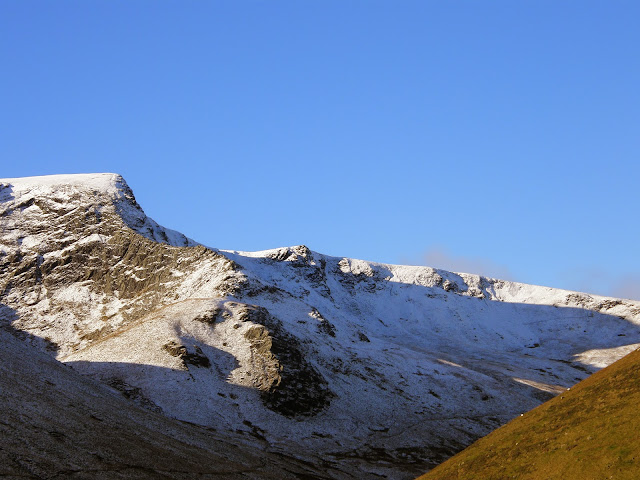 Re: A Mungrisdale Circuit in the snow

Looks a great day out in the snow, Did a variation of this route last Autumn where we did Souther Fell first. access wasn't a problem as we just followed the road till the wall ended and climbed from there. The East ridge of Bannerdale Crags is a canny ascent route but might have been a bit steep if snow covered.

Re: A Mungrisdale Circuit in the snow

Yes, the bottom would indeed be treacherous with snow on the ground. Thankfully, the snow never started properly until most of the steepness was over.