Thought I'd died and gone to heaven!

Thought I'd died and gone to heaven!


* * * * * * * * * WINTER HAS OFFICIALLY ARRIVED * * * * * * * * *
How I've been waiting for this moment, for the first proper snow adventure. Yes, summer is great, you can plan and undertake long walks, get easier access to remote mountains, you don't have to carry heavy gear, you don't worry about freezing your backside off etc. But when the white stuff arrives, it transforms Scottish landscape... And on a good, sunny day there can be nothing better than a high level walk with snow-covered peaks all around.
A b'day gift from my dreams, I thought when we started the long drive east to Braemar. The morning was cloudy in the north, but forecast said the cloud was going to burn off eventually and from midday we were promised loads of sunshine. Sometimes forecast is not 100% accurate, but this time it was

The hill we picked was An Socach, as I had deliberately kept it for a winter outing. With the long drive from Inverness (and back) we were looking for something we could complete in 5-6 hours, without having to rush like crazy. Having done all Cairnwell pass Munros but An Socach, it was the logical target.
Called a "minor Munro", this mountain is usually climbed in winter, and as we expected, there were already a few cars parked by the entrance to Glen Clunie and other walkers getting ready for the jaunt. We had an initial dilemma - should we or should we not take crampons? We decided to leave them this time and as it turned out, we didn't need them as snow was very soft higher on the hill, but it was surely the last time we got away without them. From now on its crampons & ice axe time!
We walked the traditional Baddoch Glen route to the summit:

Track_AN SOCACH 10-11-13.gpx Open full screen  NB: Walkhighlands is not responsible for the accuracy of gpx files in users posts
The starting point (gate) and cars parked on the layby: 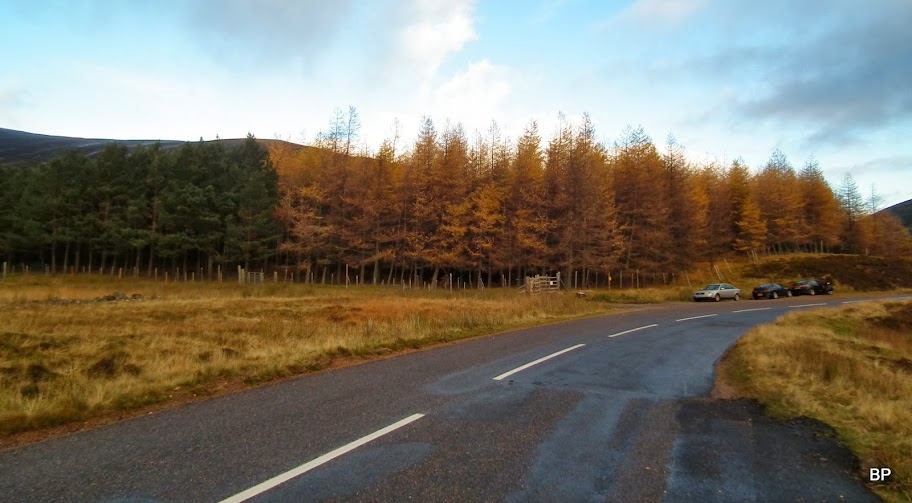 The first stage is easy, on a good track. It was still early but the cloud was already dispersing and our hopes were growing!
On the track just before Baddoch Farm (now abandoned 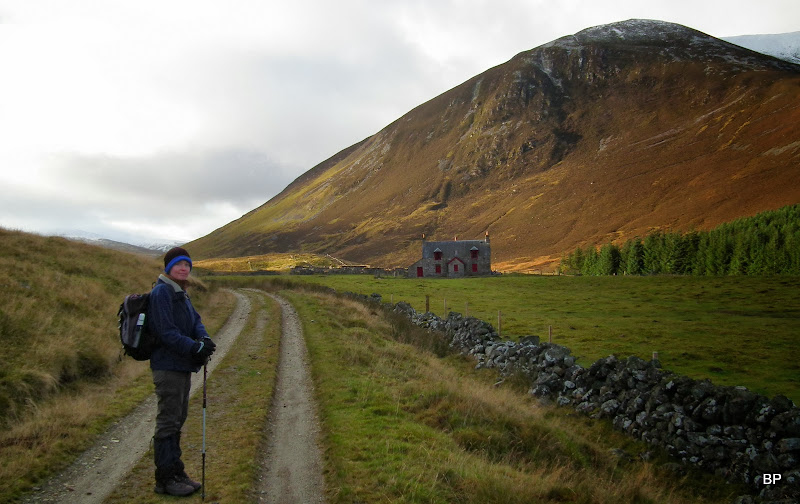 It felt a bit warmer than on Saturday, even though we walked in the shadow at the moment:

Walking along the glen is just the easy entrance to the proper workout here. The first obstacle - fording the stream flowing into Baddoch Burn (Allt Coire Fhearneasg): 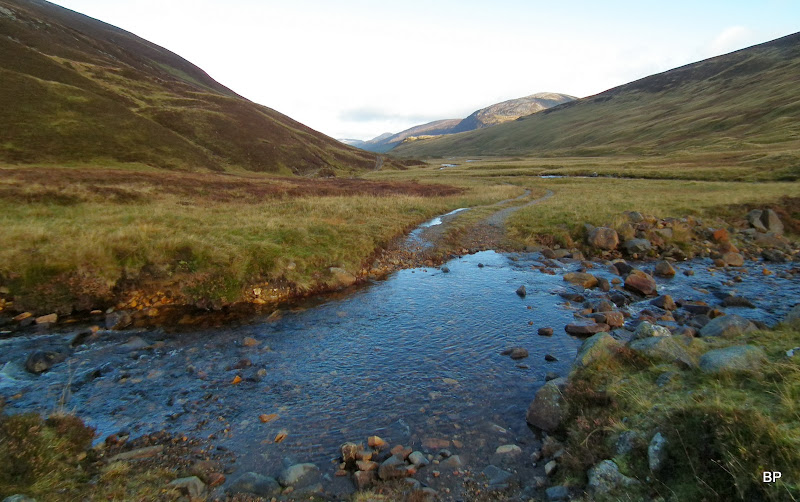 Just past the ford, we left the track to climb the slopes of An Socach, following the stream for a short time - there is a narrow path: 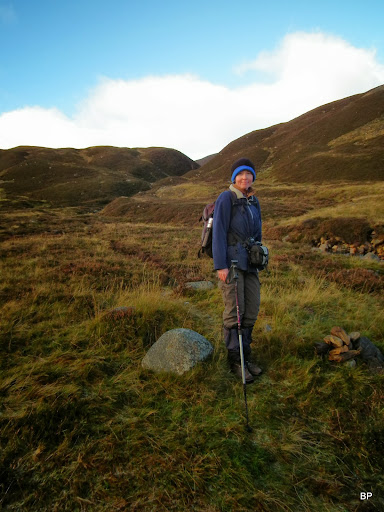 We left the stream behind at some point and continued up, quite steeply, ascending about 100m until the ground eased off a bit and we emerged from the shadows and into the arms of the sun

before us, we could now see the lower top of our Munro, covered in snow and looking so inviting!

Kevin still experimented with his boots, trying to work out how many pairs of socks/inner soles he needed to feel comfortable. During the ascent, he stopped no less than four times to take his boots off and put them on again, change socks, replace soles, tighten his laces and so on.

Eventually, he found the perfect combination... when we were just below the top of the ridge

Altogether, we lost about 30 minutes on his "boot manoeuvres" but I didn't mind, as we had enough time to enjoy this walk and there was no need to hurry. 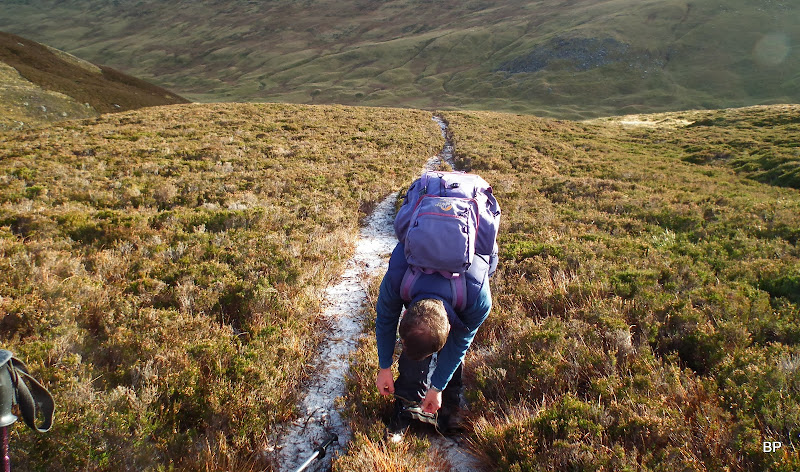 Boot adjustments aside, I was glad to see him happy!

One last cloud passed over when we arrived by the Socach Mor cairn - a short stop to take a few snaps... 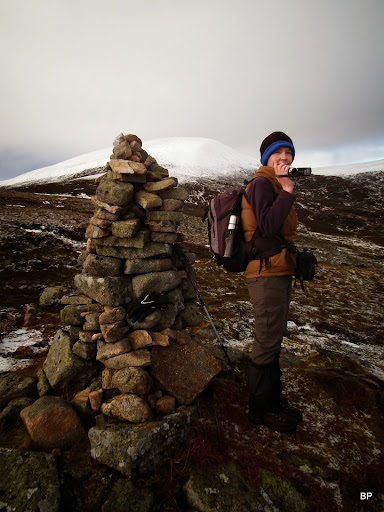 The cloud was definitely lifting away from the mountain tops and I spotted the summit of Cairnwell:

Kevin, gifted with a good pair of eyes, spotted a much smaller target - a mountain hare, higher on the snowy slopes. A few photos in Wildlife section:
http://www.walkhighlands.co.uk/Forum/viewtopic.php?f=3&t=37901
We continued up the slope, steepening again and the proper fun with snow began! The passing cloud cast a moody shadow over us, and for a very short time, the world turned grey... 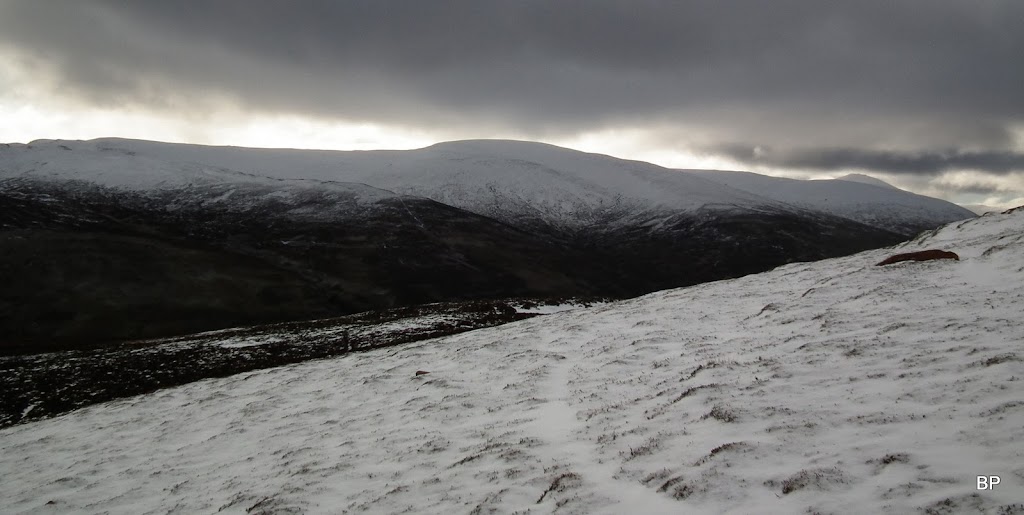 ...but I was marching up without hesitation! Climbing was rather easy, lots of soft snow but no ice underneath. I love such conditions!

Just below the first top, when Kevin was adjusting his boots for the last time, I had a moment of doubt, looking at the sky...

...but luckily, the dark cloud was only a temporary problem, it was already moving away...

The way up to heaven:

When we arrived by the cairn of the lower top (938m), the PURRRFECT blue sky entered the stage, and suddenly we were transferred into a whole different world, like we had died and gone to heaven

Still looking very alive and meowing in this photo though 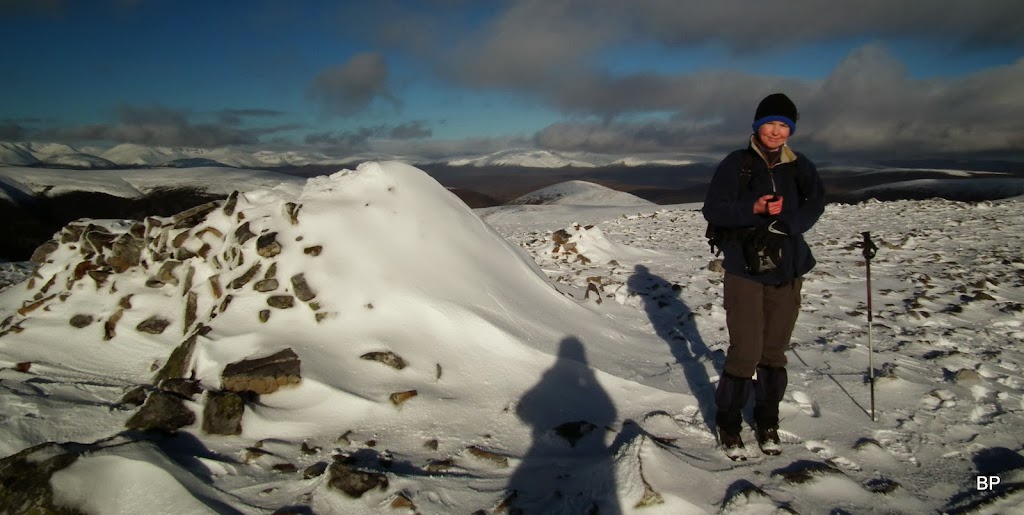 Now, time for some heavenly mountain experience. The white Cairngorms: 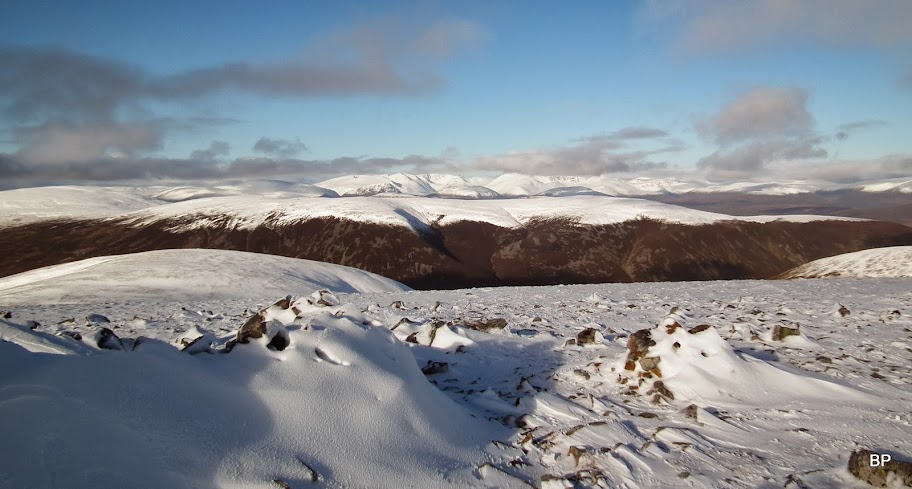 Devil's Point, Carn a Mhaim and Cairn Toul/Braeriach group behind: 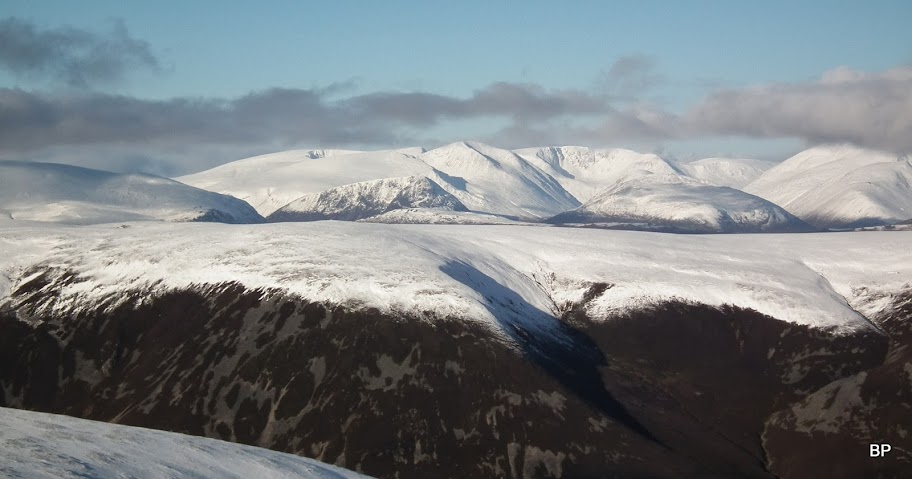 looking along the ridge, with the massive bulk of Glas Tulaichean dominating the view to the left, and Beinn Iutharn twins to the right:

One more with the cairn, and the rest of the ridge visible just behind: 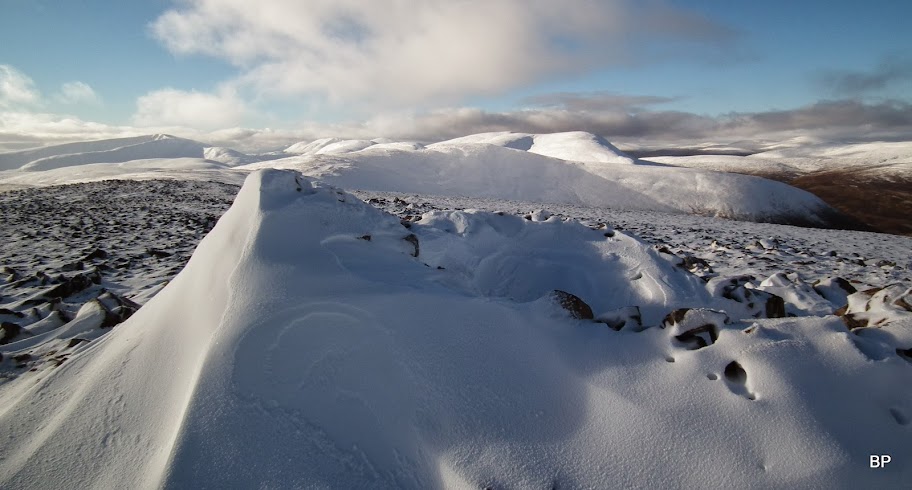 View NE with Sgor Mor top in front and Whitemouth hills on the horizon:

I could go on and on like that, but as this TR can't last forever, let's move!

After a short break on the first top, now we were presented with the enjoyable, snowy ridgewalk to the main summit of An Socach. And it was the best part of the day! Yeah, heavenly walking for sure! 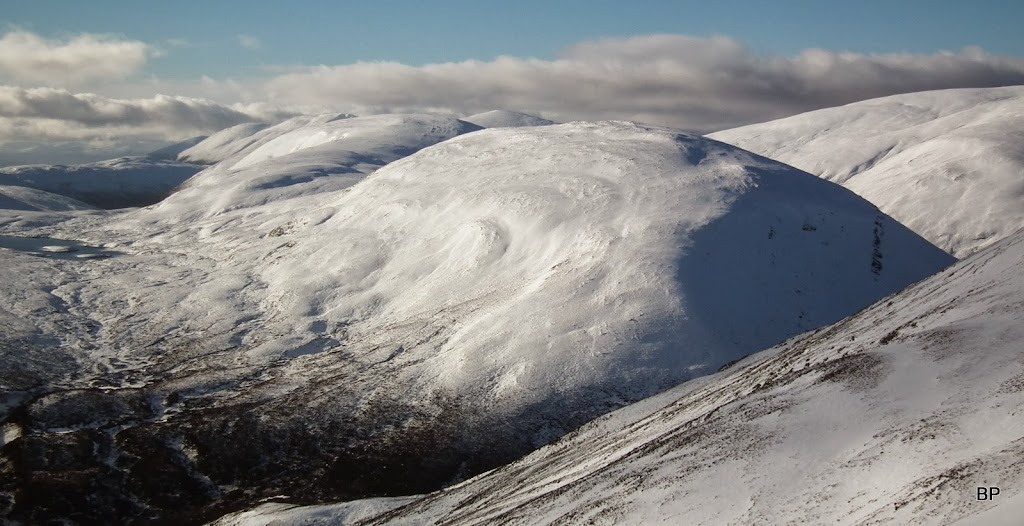 Cairngorms again - Ben Macdui and Derry Cairngorm in the centre:

Another break for filming, half way between the tops, with the lower top behind me: 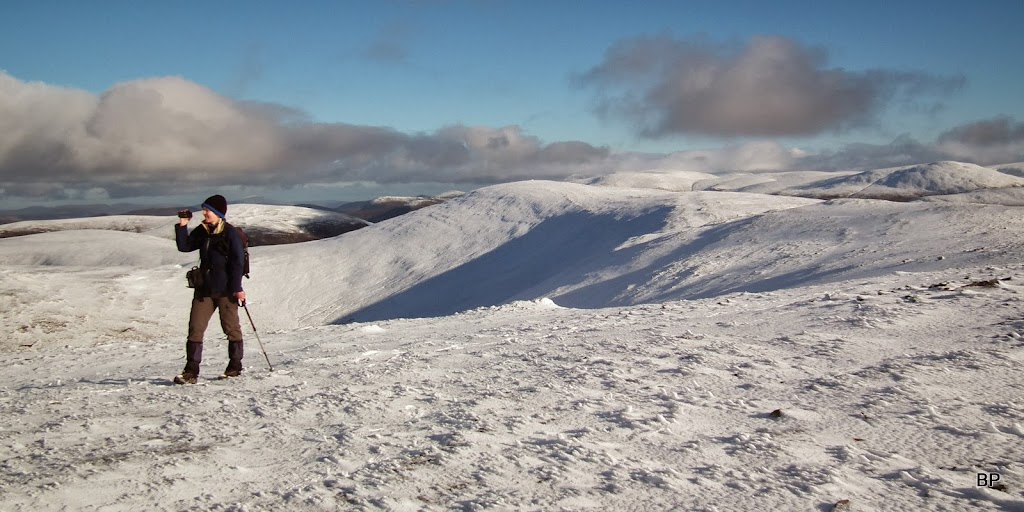 Looking into upper Baddoch Glen, it felt like I was gazing down from a cloud... 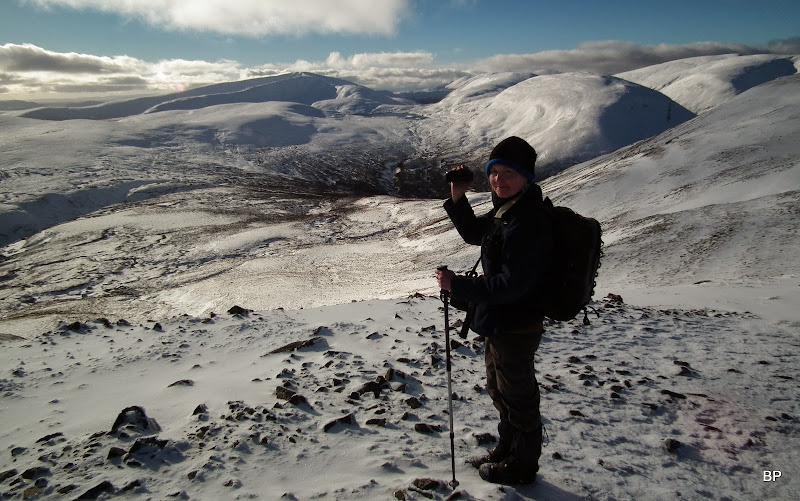 We reached the true summit (944m) and only to discover we were all alone on the hill, no other person in sight. We had met two other walkers earlier, but they started much earlier than us and have already descended back from the ridge. At the moment, we enjoyed the surprise gift of solitude in the white world

It was quiet - no wind whatsoever, it doesn't happen very often, usually in winter it's blowy up there...
My Munro No. 118: 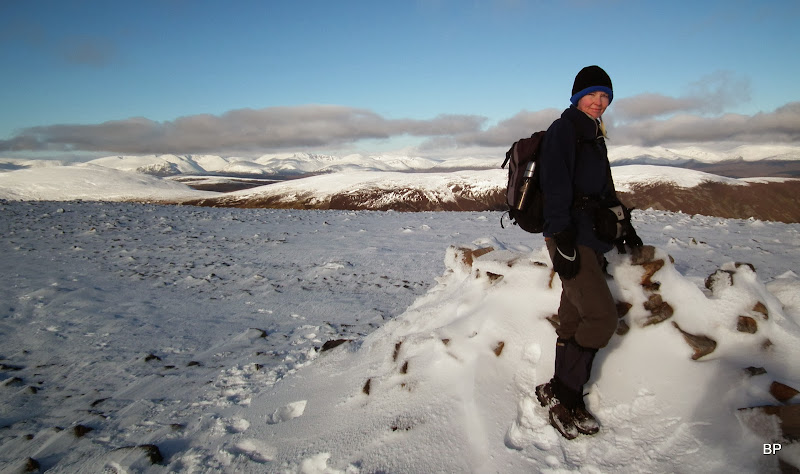 We dumped rucksacks by the cairn and and spent the next 15 minutes or so wandering about, taking photos and simply sinking in the incredible views around us...
Cairngorms one more time:

Ben Avon to the right, still harbouring a bit of cloud: 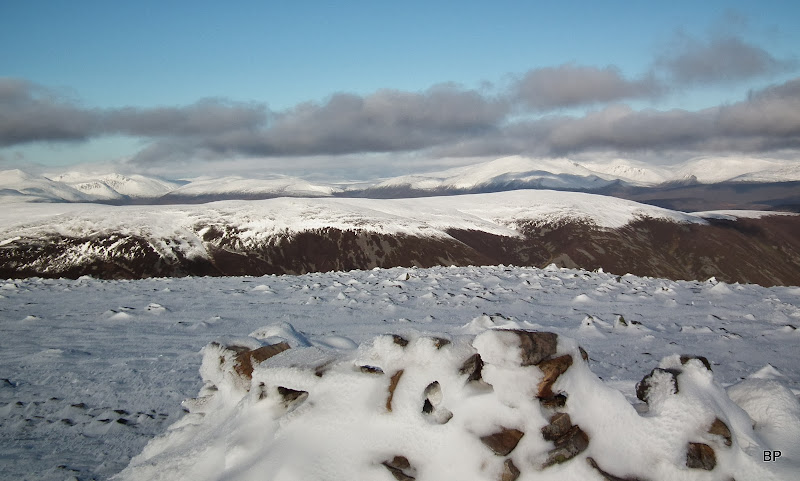 Glen Ey, like a giant gap in the white infinity:

The Cairnwell, Loch Vrotachan and the massive bulk of Glas Maol behind:

Kevin looking a bit unhappy 'cause he was eager to sink his teeth in my birthday cake, packed in for lunch! 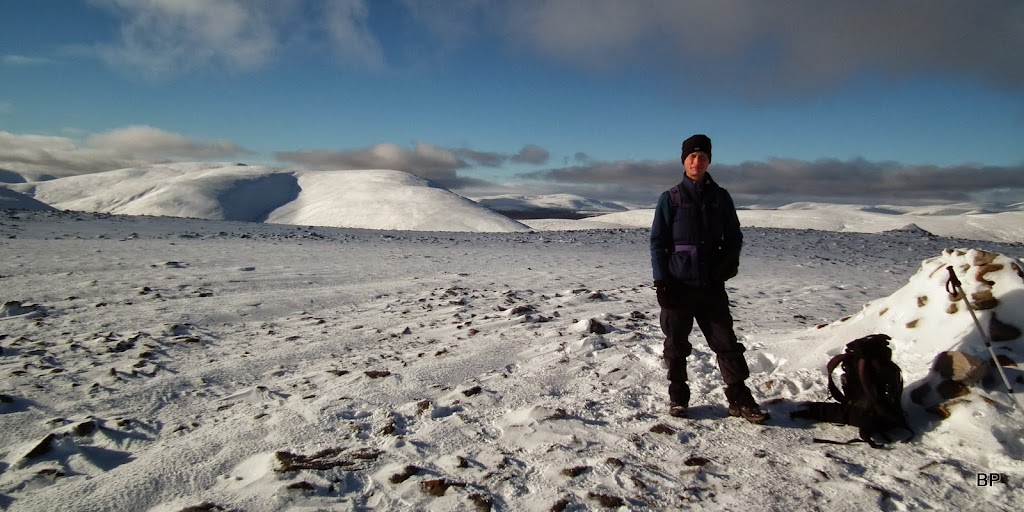 One of those pictures "Veni, vidi, vici, miaow" 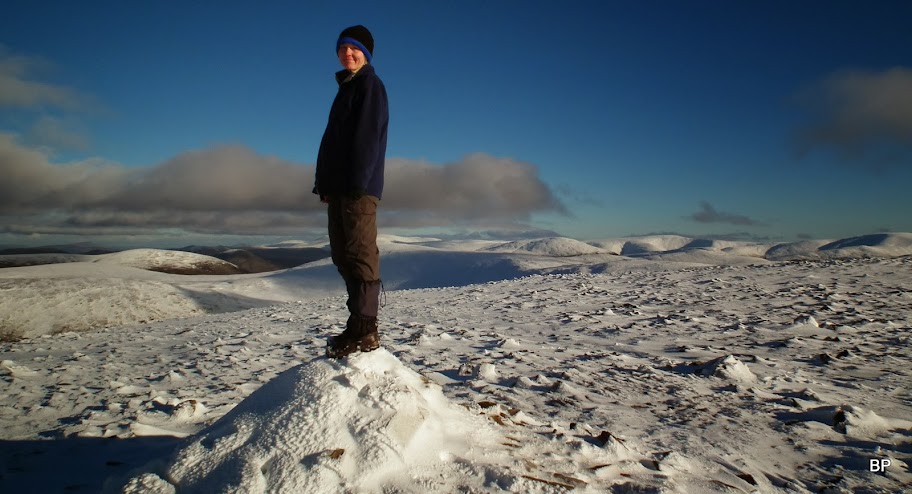 Mountains to the south-west:

A few more... The Iutharns:

Carn an Righ peeking through:

Not sure, but I think here we're looking at the back side of Carn a'Chlamain: 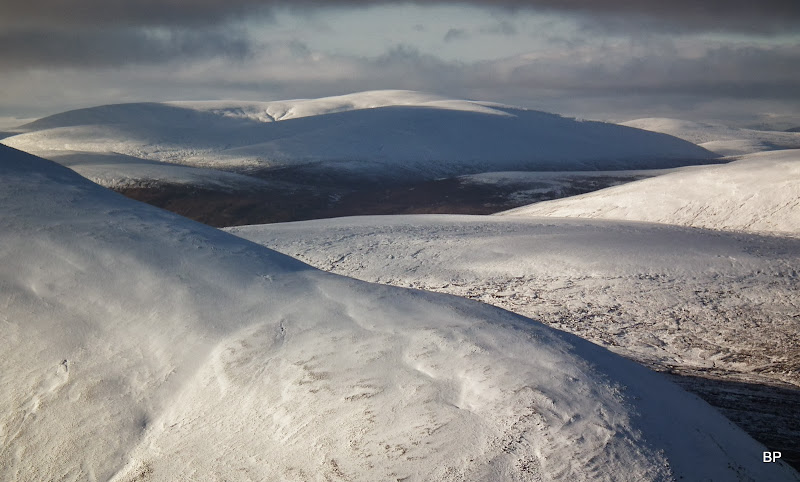 I let Kevin into the sandwich box eventually and we spent another 20min or so sitting by the cairn and... feeling like we had gone to heaven. I knew this was a hill to do in winter but holy c*** I did not expect it to be THAT good!!!
We would probably have sat there for even longer, but I spotted a large group of people emerging on the first top - it turned out to be a school trip. We decided to leave before they arrived and spoiled the heavenly silence

There is an option to descend to Baddoch Glen from the col between the two peaks, but we opted to stay on the ridge - it meant we could enjoy the views for longer!
On the way back, we kept taking photos:

When we returned to the first top, apart from the school trip, we counted at least 20 other walkers heading for the summit - the hill was now busier than A9, we were so lucky to have started the ascent earlier and avoided these crowds!
One last glimpse back to the first top:

We followed the path don to the glen, enjoying the afternoon sun:

On the slopes of Sgur Mor, we sighted a small herd of deer, stags making a lot of noise:

Well, once back in the glen, we had to descend from heavens to the earth and think about more ordinary things, like driving home and cooking dinner... But oh, what a day we had. Shows that there are no boring mountains and no boring routes. Certainly not this one. If Saturdays birthday walk was good, this one was Simply The Best. Meow!

Stunning photos, looks like you had the most amazing day

. What a fabulous birthday weekend. Makes me keen to get back out on the hills...just need this wind to die down a little

A superb collection of photos BP

Another of those so called less interesting hills, but your photos sure demonstrate that is most definitely not the case

This hill is actually a very special hill to me, but sadly is also the site of my most serious hill walking related injury to date (lost finger nail occasioned by a slip on the icy summit plateau in the mist

) Still, a hill I will return to though

Well done on capturing some lovely images of the cairngorm hills displaying lovely winter coats. Complete transformation from my recent visit to this lovely hill.

Poor Kevin and all that boot trouble! Least it was a nice day

Nice one BP - from rich autumn colours to sharp alpine monochrome against a blue sky. You had it all.

Very similar day to the one I had on this hill about 4 years ago, but my battery died early days and I hardly got any photos. This brings it all back. Thanks!

Just wanted to say thank you for all nice comments

We struggled a bit with the car, so missed one weekend, but went out climbing last Sat again - TR coming soon.

happy birthday and what a lovely way to spend it!