The route was via Gleann Dubh Liath and up onto Creag an Eich before heading for the bealach between Beinn Tuim and Meall an Uillt Chaoil we left the car at 8.30am The road through the harvesting site at Druim Sallaichan is grand , then a left fork on the track above the road down to the bothy takes you on to the open hill ..rough and wet it is as well

We soon hit the snow line and not to deep ...... fhathast Bha an t side breagha latha fuar ach grianach ..... The weather was perfect like a cold Alpine day and the scenery from the Bealach was promising all round but especially down Sheil side . We headed up to Meall an Uillt Chaoil a sharp climb with the snow becoming increasingly soft and deep ! good sealladh to the West and Eilean Eige 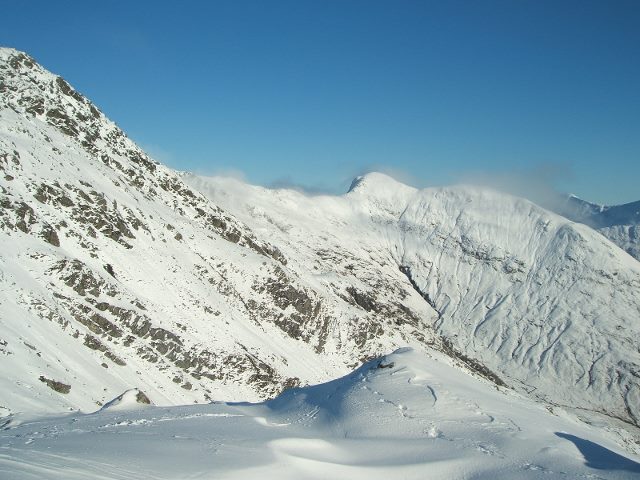 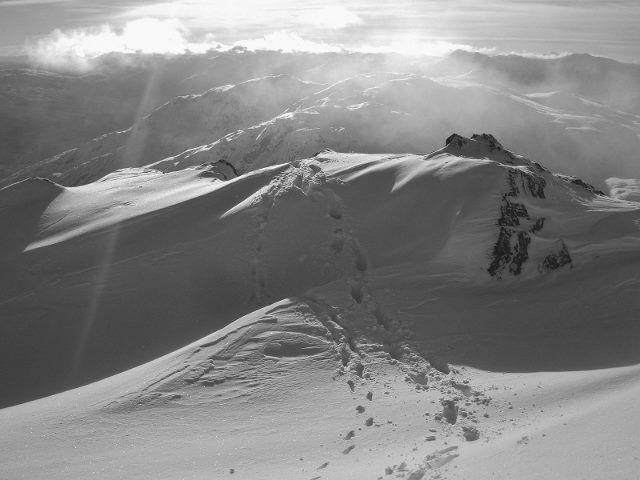 It took an age to reach the summit of this wee beauty so a quick stop for lunch , I was now conscious that time was pushing on so a short break to take in the views and the Druim Caoil Streap . And to the Ben The descent and renascent to this point was pretty full on in fact never ending and narrowing with dodgy cornicing making the going very slow...... weather was still superb 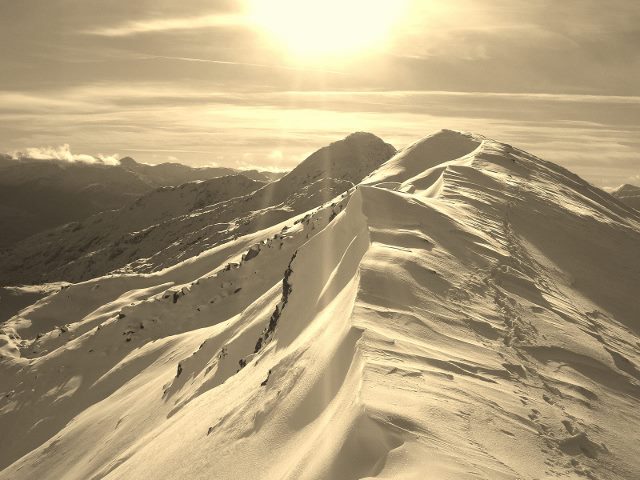 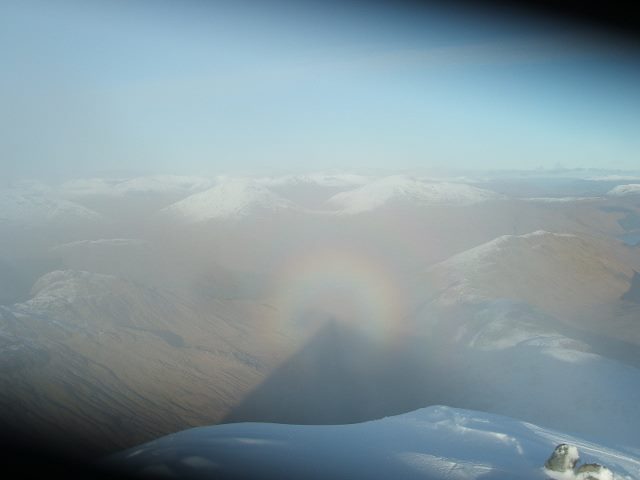 I tried to go round this stac on the North slope but I did not like the feel of the snow under my feet although deep it gave me the eagalach or fear .... just did not feel right The time was getting on at 2.30pm so I made the decision to bail rather than try to traverse this and on to the Streap Comhlaidh probably not the wisest decision I have ever made !

I dropped down into Coire Chuirn literally the corrie of stones .. heaps of them

Again slow slow going so as no to break a leg but I got through the fields of stone and onto the bowl of the coire and breathed a sigh of relief it was now 3.45pm and darkening I was in for one final surprise! ......over the lip of the coire a steep craggy slippy clamjamfourie of moss, grass, slab rock and ree snow ,at one point I seriously thought I was going to get stuck in a steep wee grass /stone /snow gully but by using the ice axe as a post I managed to negotiate my way down. In Summer this would be relatively easy but was a bit of a nightmare in these conditions . The dodgy route down

Co dhiu bha sin an latha .... that was a day to remember we were back at the car for 5.30 a full 9.5hrs and not even completing the circuit so a wee reminder in Winter allow loads of time , remember the snow and enjoy A tough, tough looking day, but some absolutely stunning views

Have got this one on my radar, but think I'll wait a while

S math a rinn thu! grand day and some cracking pictures capturing the essence of walking in these conditions..

scottishkennyg wrote:S math a rinn thu! grand day and some cracking pictures capturing the essence of walking in these conditions..

Have got this one on my radar, but think I'll wait a while

Beautiful
Have this up near the top of my part 2 list.
looks a tough one indeed

Beautiful photos, Colla, as ever - I did Streap on a hot midgey day 10 years ago..........
Find myself looking forward very much to your reports!
Beautiful.
Iain

. Lots of photos, 6th one in particular, look like the Alps or something. Hoping for a day like this (although hopefully with more solid snow) when I go up Streap.

The fear has to be respected

Its a cracker Robert ... that grahams total is getting there a bhalaich

Good effort and super photos, Streap is tough enough without doing it in those conditions.

Cheers one of the best days yet