Day 1 of the Kinlochleven meet.

I arrived up at the bunkhouse last night,,bringing Martin,MG1976 up from Glasgow. I had already planned on doing Sgulaird with Tomsie,,and by now, several others had signed up for this one too.

Starting point at Loch Creran agreed for 9am. Colleen and Barry, Tomsie, myself and Martin travelled from Kinlochleven and met up with Evie, Stuart, Hayley, Lucas, Kev who all drove up and over this morning, long drives for all of them. Party of 10, booted up and heading off at 9:10am.

The start of the climb is a little further past the layby, on a bend in the road. The track climbs away to the left beside another track to Druimavuic. We followed 2 walkers and a dog and started the initial uphill slog. A breather on the path up Views back down Loch Creran to the West

There are big scale works going on further up the Allt Buidhe burn, laying of massive water pipes and this track seems to be there to service this and provide access for JCBs, etc. Its a steep, zig zagging climb and fair gets the heart pumping.

Todays forecast was shakey to say the least, but brighter skies over the Ardgour peninsula were encouraging.
Then, at around 200mtrs and while still on the track, the rain started. We all stopped to get our waterproofs on, tops and bottoms. On heading off, eagle-eyed Evie had spotted we were actually at the cairn, marking the turn off up the hillside. A very boggy path followed on a steep ascent. Still no sign of the white stuff here, just a slog up to the initial wee top at 488mtrs. I had been warned by Allison and Weaslemaster that Sgulaird was a series of hills, dropping down and having to regain the height again. Shortly after the top here, we came to the first of these. Not a long drop down at all, about 30-35 mtrs down a steep zig zag before crossing a wire fence and starting on the less steep ascent of the next stage.

This climb was undulating, now in snow and quite rocky in parts so some hand to rock, poles down and scramble up. Helps to break up the climb a bit. By now, my new-to-me boots that had performed well on last weeks snowy climbs in the Lawers range, were well and truly soaking. Wet feet, not good this early in the day. I was also finding todays walk a little tough, no real reason that I could put my finger on, just a general lack of motivation or energy or 'something'.

On reaching Meall Garbh at 848mtrs (me last, again) I settled down to change my socks, to be honest,,this was a total waste of time. My left boot in particular was soaking and it just went straight through the dry sock. Not a lot of time to take in some fuel either here, this may also have contributed to my lack of energy later in the day. John under an impressive sky

On the upside,,,from here,, we could see across the next drop down (not good) to the rocky shoulder of Sgulaird itself. The view of the final push

You lose about 100mtrs on this drop and after a bit of hail earlier, the weather very quickly swept round the hill and over took us. Visibility dropped to about 20yrds, icy hail battered us from all angles, sore stuff, but we battled on. Each of the weather fronts coming over us today lasted no more than 5-10 mins each, couple of hail storms, 1 snow, 1 rain and we had a nice gentle snow fall on us at one point too, in a more sheltered part of our descent. better than we had hoped for. Barry all wrapped up for the storm

Again on clearing, we could see the continued rocky ascent up to the summit. The shoulder climbs NNW and falls away sharply on both sides, plenty snow on the ground now but also pretty boggy underneath. Think the coastal position of this hill may mean it saved less snow than those a bit further inland. There were several rocky chimneys, steep descents where you really had to take care. I did unfortunately and embarrassingly come a cropper on one,,lol oh still makes me laugh,, leading with my left foot down a slab of rock, the weight of my pack got the better of me and i started to fall away to the left, backwards, round the wrong side of the rock and slid to a stop, feet above my head and unable to move. Part of me hoping no one in front saw but I had to let out a girlie "HELP" ,,at that point I managed to roll over to see everyone looking back at me,,,all that was missing was the score cards

I continued my plod up hill knees a bit of a quiver after my spectacular slide and in my usual position of "the coos tail" I finally reached the top, then on over to the summit cairn at 937mtrs. Over to the summit

The weather had again cleared and we had smashing views down the loch to the sea and Ardgour beyond. The sun peaked through to show up some lovely autum colours under the snowy tops around. Very atmospheric at times. 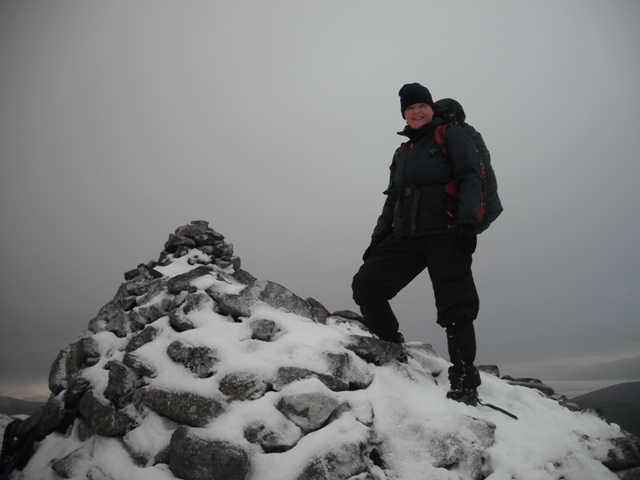 John against a sunny backdrop

Coffee, sandwich eaten and a Snickers bar stowed in my pocket (there are other brands of nutty/choco snacks! lol) we had a final look round and headed off. I had a wee giggle to myself on reaching the site of my earlier 'slip up' seeing the evidence in the snow as I scaled back round the right side of the rock lol

Coming down off Meall Garbh,,the WH route then veers straight down to the left,,rather than going back over the first of the hills. So off left, down towards the Allt Buidhe and the working track. The light was failing now , not long after 4pm and we got a lovely pink sunset sky. Thankfully, time to get back to the cars with no need for head torches, at around 4:45pm. Feet well and truly sloshing around, but not cold surprisingly. Back to the Blackwater ,,dry feet and lager.

This was a hill I hadn't given any thought to , previous to Johns suggestion for today. Its tucked out of the way a bit but despite my wet feet and lack of energy today, was a good one to get. A great crowd on the day, thanks all.

Re: Beinn Sgulaird,,the hill the keeps on going!

Nice one Gill ..she is a long wind right enough

Sounds a spectacular slip right enough but good no damage was done, apart from your pride!

Wasn't an easy walk was it? But worth it.
Great day out and nice to meet you all. Look forward to the next one

Sounds like good fun was had by all! It certainly is a rough hill. I was up there a couple of weeks ago: we started from
Elleric and went up the NE ridge. The final section is very bouldery and was covered in a thin layer of wet snow which made it all rather slippery. I decided it would be a good idea to descend into Coire nan Capuill, which looked like a reasonable proposition on the map and from what is visible from above. However there is a band of smooth slabs which extends right across the head of the coire: we eventually found a way through at a narrow fault by traversing a long way to the right (looking down) but I wouldn't really recommended it! The only other option would be a boulder filled gully on the left, but that did not look too appealing either. And the rest of the descent to Glenure was pretty rough going, too. This was our route: I'm more posting it as a warning than a recommendation, though the NE ridge is a fine approach.


sgulaird.gpx Open full screen  NB: Walkhighlands is not responsible for the accuracy of gpx files in users posts

It was great to do this hill in such fine company.Thoroughly enjoyed it as well as the beers at the bunkhouse

Bought some goggles yesterday so no more exfoliations for us!

jmarkb,,,already had a warning about the NE end of the hill,,so it was never an option for me lol

Barry,,, my goggles arrived while I was away,,,bad timing eh,,but armed and ready now!

Good start to the WH meeting in Kinlochleven, and walking with new folks. That fall could have being nasty, maybe we should start walking with the helmet's on .

Tomsie wrote:Good start to the WH meeting in Kinlochleven, and walking with new folks. That fall could have being nasty, maybe we should start walking with the helmet's on .

Nothing worth saving in MY head John lol