John, Jennifer and Mark had missed out on this one yesterday as conditions on Stob Ban were pretty bad, so I decided to join them on a northerly approach from Glen Nevis, on what was shaping up to be a bright, white day. 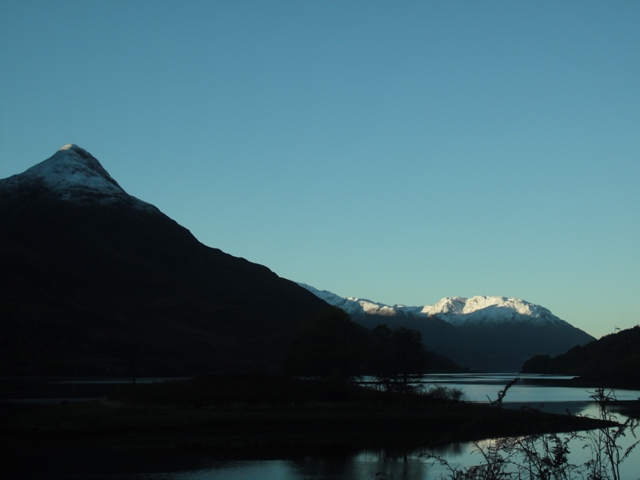 Pap of Glencoe and Beinn a'Bheithir in the morning sun

We parked up in the car park for Lower Falls, on the right of the road up Glen Nevis, at Achriabhach. I had started to have some doubts about my winter walking abilities and was harbouring a notion of pulling out and doing the walk up into Steall instead, but with some encouragement from John, bit the bullet and off we went. Walking back down the road, we went throught the gate for the Stob Ban route but realised we needed to be on the other side of the burn so back out on to the road and on to the forest track up. 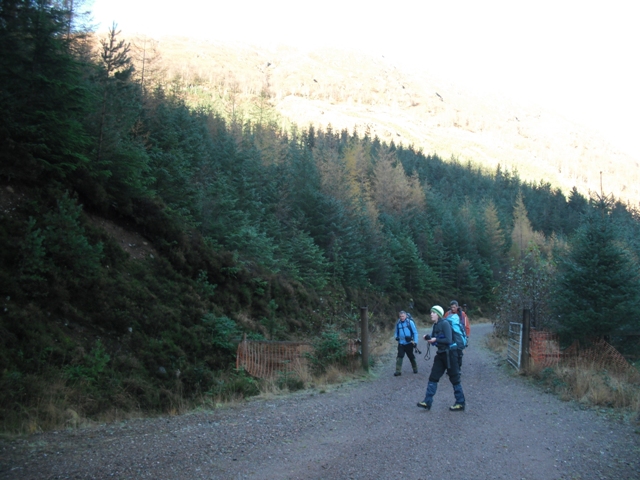 On the climbing forest path, we took a left turn, then a right, then reached a cairn above the burn that marked a path heading off up into the trees. The path was fairly flat in places, climbing round trees and rocks, some really muddy parts and a tricky bit climbing over a fallen tree,,hard with a big winter pack on your back. After a while,,we simply turned right and started climbing straight up throught the forest. This was a tough stretch, negotiating large packs round tightly packed conifers, branches catching packs, clothes etc and the wet roots were slippy too. Picking my way up , John and Mark a little way ahead, Jennifer,,she was a woman on a mission, couldn't even see her anymore lol 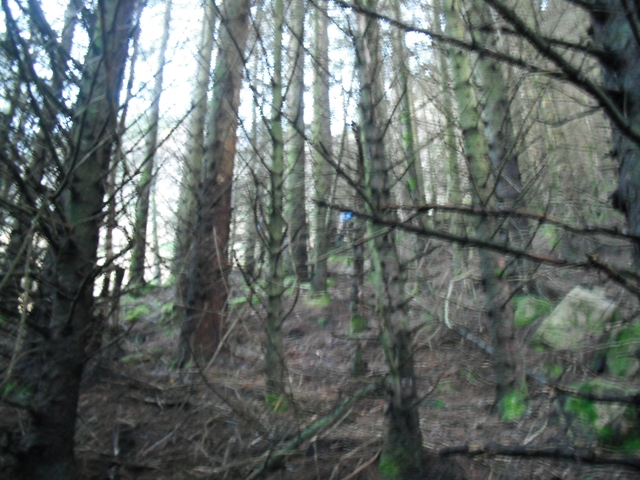 Up through the pine woods, John just visible in blue

Kept my eyes on J & M to make sure I didnt go too far off course but it really was just a case of UP UP UP. The trees started to thin and we found ourselves in amongst birches rather than conifer,,the sky opened up a bit and we then climbed on up through heather, bracken, grass and mud. Pockets of icy snow, melting in the days sun, got bigger as we approached the top. The sun had a real heat behind it, despite the time of year, lovely blue skies too. 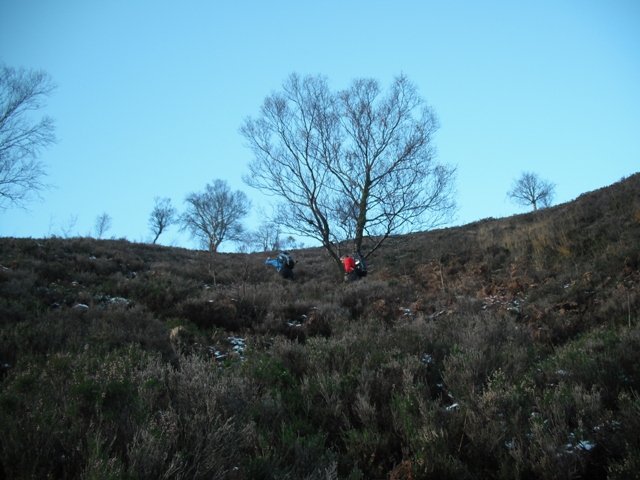 .....and into the birch and heather

I could see John and Mark discussing direction etc and thankfully they waited on me catching up before moving on.

As we cleared the top of the shoulder, we could see the fenceline running right/left a way ahead. The uphill approach from the right should have been our route up,,and would certainly be our route down. But for now, up we go. 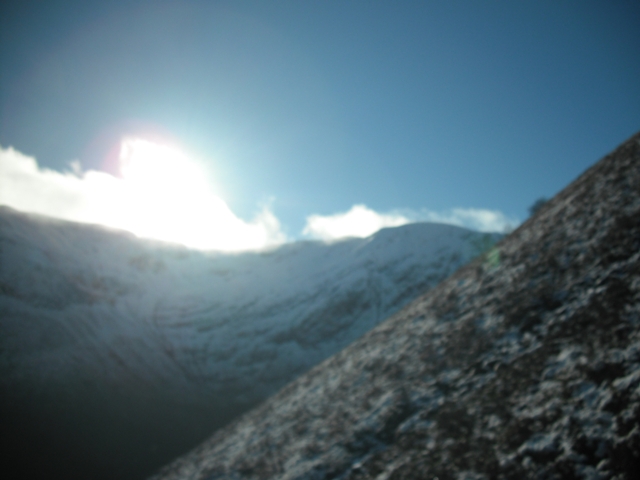 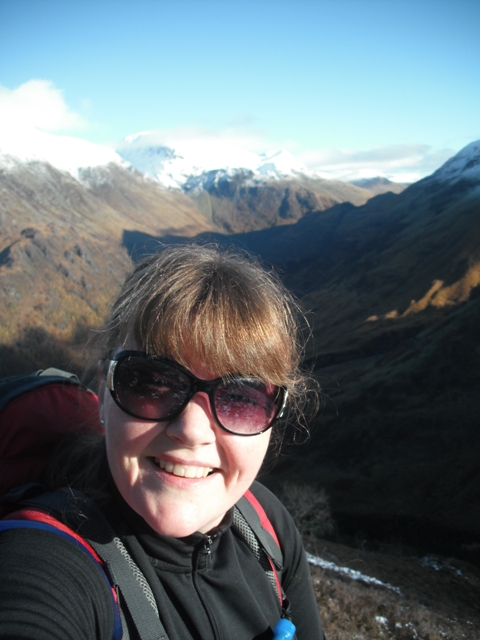 Selfy with Nevis in the background

Lovely snow by now, with Jennifers path cut for us already. All the way up,,we had glimpses of the views back to Nevis but now we had 360 degree views of snow covered hills under blue skies, totally fantastic. John pointed out Stob Ban, the one I missed yesterday (any takers to go back up there soon?) The ridge from their to Mullach nan Coirean seemed very long. 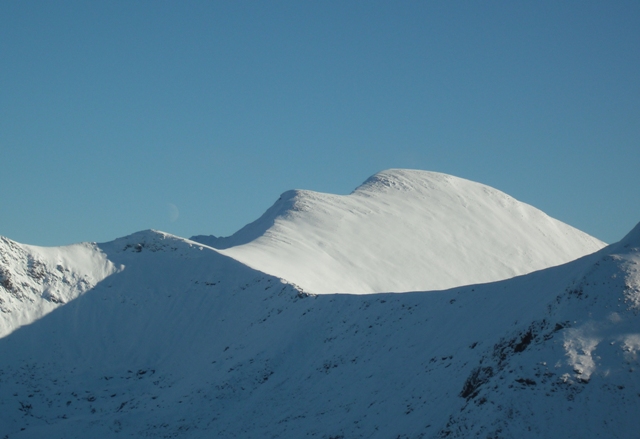 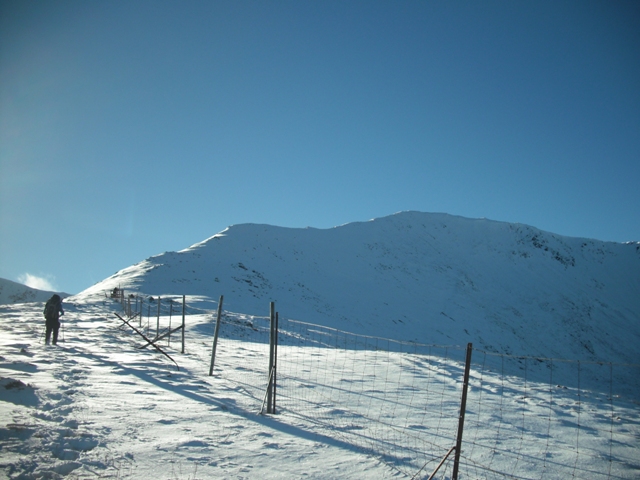 Following the fenceline up to the ridge 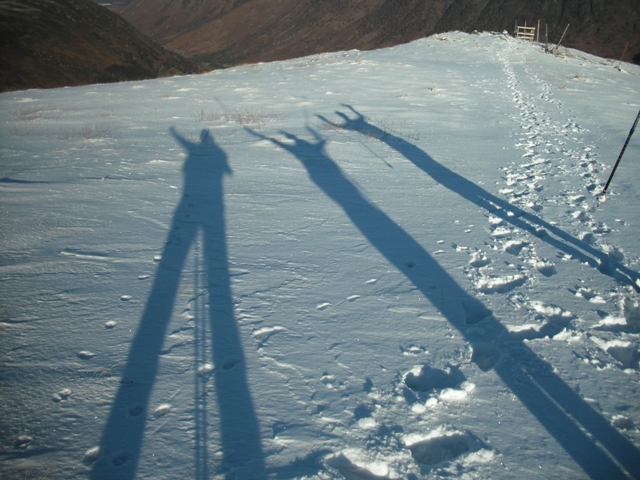 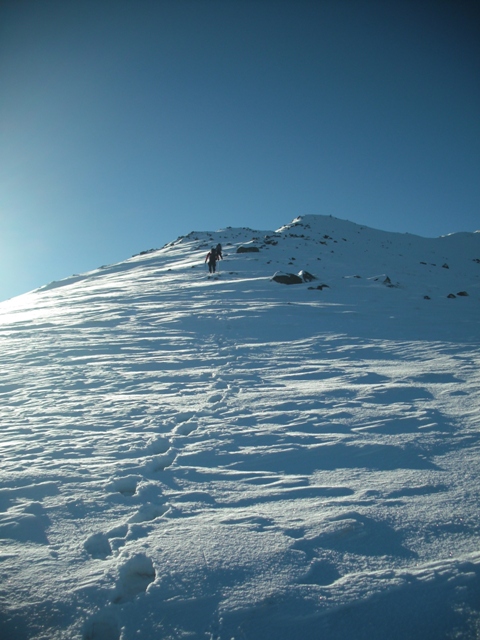 Fantastic climb up to the ridge

Todays route was easily seen ahead, over the fence at a stile, continue the ascent, through ever deepening snow and rocks, following the ridge line to the south west. Theres always a song in my head when im climbing, (that or much cursing) but today really was a Perfect Day,,so Lou Reed was giving it big licks lol

The narrow ridge between Coires Riabhach and Dearg doesnt seem so narrow as the map indicates due to the volume of snow,,but when your foot/leg disappears just the bit more off the trodden path, you get an idea of how much it slopes away.

Reaching the crest, the summit cairn could be seen over to the left and its a lovely flat wander round to meet it. We passed a chap here who had come up over Glas Chreag, probably using a starting point Scoob had suggested from about the West end of Fort William. 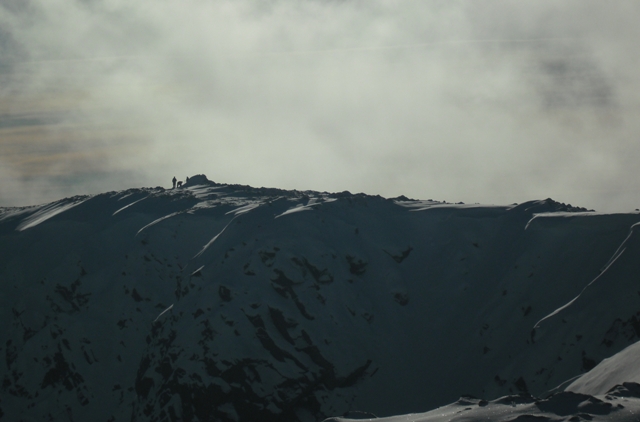 Over the ridge to the summit

Got to the cairn, again, surrounded by amazing views, some drifting low cloud but sun was beaming. Hats and gloves out though,,,this white stuff is pretty cool to look at , but colder to be in. Mark had brought some moustaches in honour of Movember, so in the spirit of the occasion, we donned one each for a summit pic. Worrying how much John suited it lol. 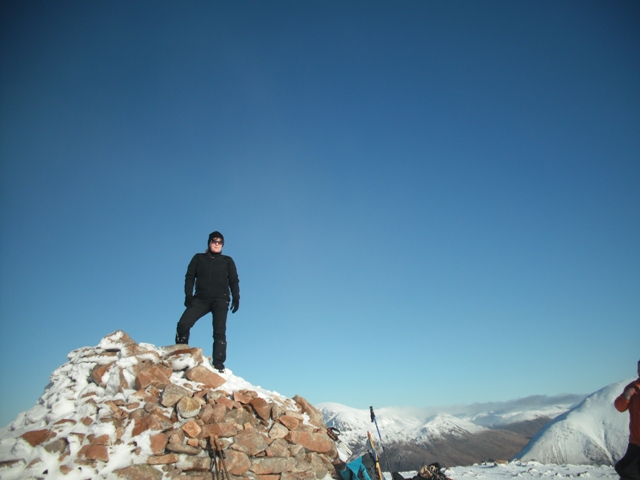 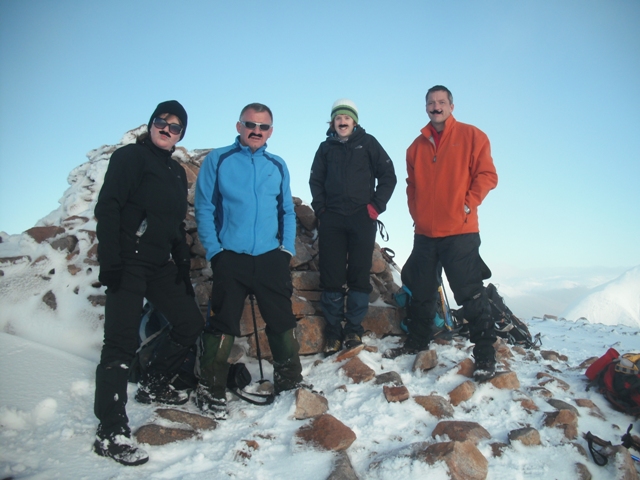 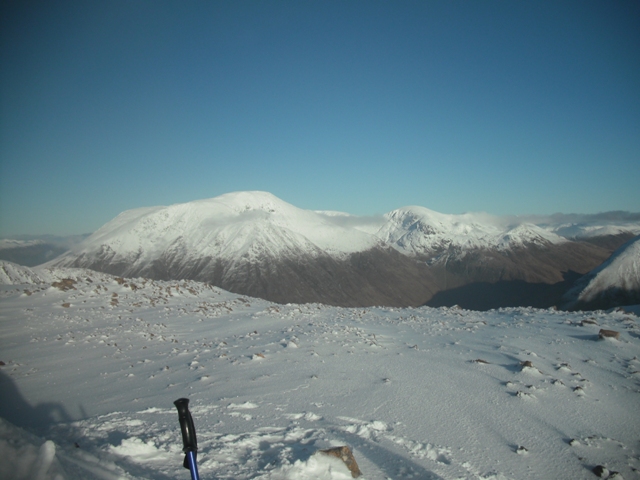 Views over to Nevis

We had seen two people behind us but they still hadnt reached the top,,,i had thought we should all keep the taches on until we met them lol

On heading off the hill, doesnt take long to heat up again. Lots of effort in dragging yourself out of snowy footprints that have collapsed under you lol. The light was changing constantly and the sun picking out different hills every few minutes, fabulous!

Jennifer, then Mark had headed off at quite a pace,,on reaching the stile at the fence, we couldn't see either,,although 2 sets of footprints stayed on the western side of the fence, John thought he'd seen Mark cross the stile from higher up. Anyway,,we both followed the two sets of tracks and were now on heathery ground, snow disappearing and pretty heavy going underfoot. We eventually caught up with Mark who was, indeed, on the other side of the fence. John helped him get over the deer fence just at the same time as I went over on my right ankle and let out a bit of a shriek,,,no damage though,,good job.

This section soon became very boggy,,with rocks covered in a thin film of slippy ice. tricky footwork needed. Mark and I preferring to hang off the fence for support with John wading through the bog a bit further out and away from the rocky stuff.

Climbing down, there is a high stile, with a doggy gate for the 4 legged hill walkers. up and over and then its off down through a felled area of forestry. Some huge tree stumps, wee wooden bridges etc. As earlier,,this should probably have been our route up the hill but I was happy we had taken the other route, gained height a lot quicker and also avoided the muddy boggy icy stuff too early in the day.

On reaching the main forest track, just followed the zig zags back down to the road.

This had been, for me at least, a perfect day, I loved it from start to finish. So glad I didnt listen to my own doubts earlier and missed this amazing experience. Thanks to Jen, Mark and John for your company. Magic 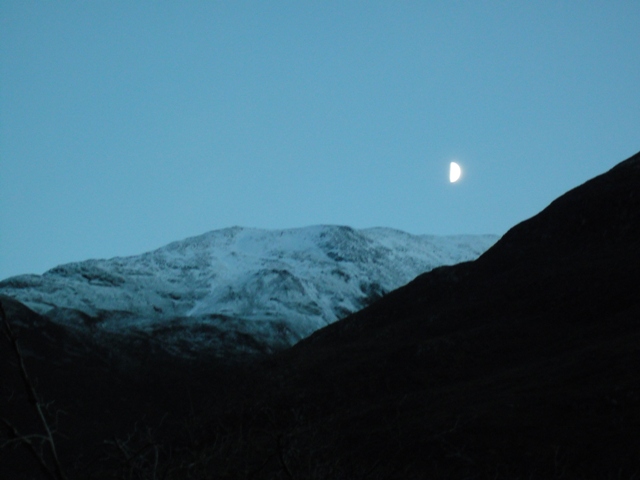 Moon over the AE ridge on the way back to Kinlochleven

Great report for a great day.

Wow, definitely a perfect hill day! Looks like a nice walk too..must give it a go soon

Thanks guys,,,im checking out the route to Stob Ban from Glen Nevis too,,straight in and out,,since I missed it last week.

The weather was perfect for this. Bit steep to start with but gave a different route up

Great report, it was a fantastic day out to round off a brilliant weekend - the views more than made up for the slog through the forestry

). Nigel and I almost succumbed to sunstroke on Garbh Bheinn!