Beinn a'Chrulaiste - A Day of Great Company and Great Views

Beinn a'Chrulaiste - A Day of Great Company and Great Views


It seems WalkHighlands Meet Weekends pass all too quickly. After a brilliant day with my other half, AnneJ on Stob Dubh, and a great night (quiz winners *cough* *cough*) it was time to get another walk done before we all went our separate ways. We hadn't really decided what to do, but Nathan79 had long fancied nipping up Beinn a'Chrulaiste, the Corbett which towers over the Kingshouse Hotel on the road into Glen Coe.

Arrangements were made and soon we were all meeting at the Altnafeidh "car park", which looks more like a testing site for lunar landings than somewhere to park a car without removing most of it's underbody. Nathan, having made the arrangements, was later than anyone else having stopped to take some photos

The first half hour is a boggy affair, but once on the steepish slopes the path is soon picked up, and it's an enjoyable wander up. It's not long before stunning views of Glen Coe's snow capped peaks reveal themselves. As we got higher up the mountain, the views got more and more spectacular. We were surrounded by the Bidean Massif, The Mamores and the looming giant of Stob Dearg across the road. The awesome view down Glen Coe There were photo-stops aplenty. Maja nipped over to a rocky outcrop for a spectacular snap. The walk sort of levels out after the initial rocky section, with a short stretch over some frozen lochans. The views were non-stop tremendous. These are the sorts of days that make up for all those other days on claggy summits and dismal weather. The Mamores opened up too. It was around this area we bumped into Meatball, on the way back down his mountain On we went, taking in the views all around. The snow was deeper at this point, but still that nice crunchy fresh stuff you can step properly into. There are a couple of false summits, but on a day like this, who cares? Stob Dearg from near the summit

Finally we reached the summit trig, and a little further on the true summit cairn. The views were absolutely breathtaking. A 360 degree panorama of Scotland's snow-capped mountains. It was difficult to decide what to look at first AnneJ with her two favourite mountains so far in the background

We wandered about the summit plateau for ages, taking photos, discussing which mountain was which, and generally feeling pretty lucky to have this kind of thing on our doorsteps. After a while it was time to get going back down. The views continued to be awesome. Shortly after the summit drop off we encountered Leithy and Basscadet who'd scrambled up the pink rib. That looks great fun driving past it later on. We were also treated to an improved view of the Mamores as the small cloud band lifted. Binnein Mor from this angle looks wonderful. The Bidean Range looks not bad either Ritchie was having fun too! Eventually we dropped out of the snowline and began the boggy stretch. This didn't take too long thankfully. We were also treated to the bizarre touchdown of a helicopter across the road, meeting a ScotRail truck. Miles from the nearest railway A last look at the mountain

Afterwards, goodbyes and good wishes were exchanged and we all set off our separate ways. Even the sunset was beautiful. We stopped off down the road a bit for the sunset over Loch Tulla and the Bridge of Orchy area. 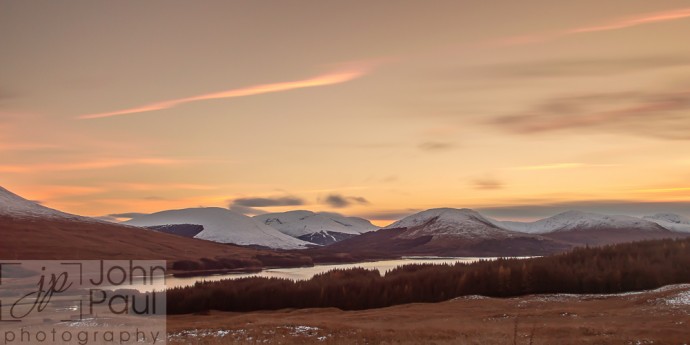 And so endeth another fantastic WalkHighlands weekend. Hopefully the next one is just as good

Re: Beinn a'Chrulaiste - A Day of Great Company and Great Vi