Apologies for another dreadful pun-titled walk report. I shall keep this one brief as i've had a few lately

My original intention had been to do the 4 munros from Invervar. Alarm set for ridiculous-o-clock and I was off at 6:30am. Annoyingly, upon arriving at Invervar, I found that not only was the gate locked, but the estate have surrounded it with high steel security fencing. Are they secretly working on another Area 51?

If the estate are genuinely having trouble with deer numbers and still culling, I'd respectfully suggest they find out what on earth the gamekeeper is playing at.

Anyway, onto Plan B. AnneJ and myself had abandoned Meall nan Tarmachan due to cack weather on the Friday before the meet, and having done the Lawers Range, I decided to nip up Meall nan Tarmachan instead. It was a cracking morning and i hoped to get some good photos. Glen Lyon is beautiful, and if nothing else, I now have a good excuse to come back to it.

The Lairig road was a tad icy in places, making an emergency stop to avoid hitting a Range Rover who seemed completely oblivious to passing places quite entertaining.

Anyway got a nice view of the reservoir on the way to the Lawers Car Park. 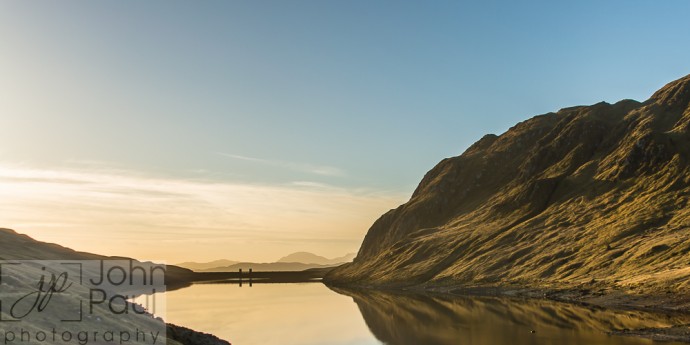 I parked up (£2.00 charge) and got moving up the hill. Lovely views of the Lawers Range opened up fairly quickly. 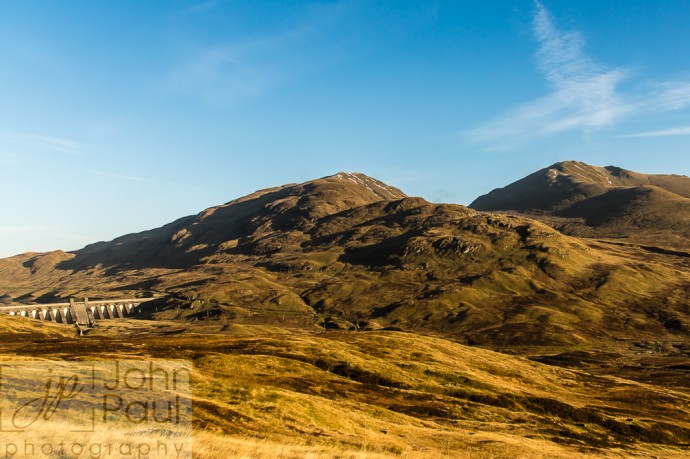 It's a quick walk up to the gate, and shortly once round the corner, you get a nice view of the ridge itself, and down to Loch Tay and Killin. The sky was a nice shade of blue also! 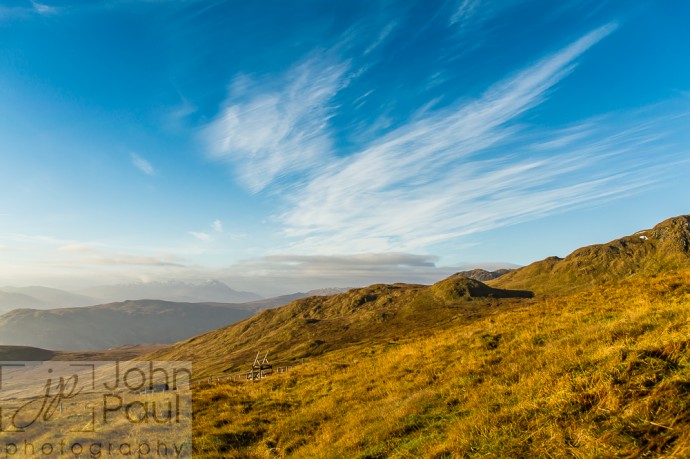 It's a short walk to the first top, and a cracking view of Lawers etc was to be had. The dam also looked like a toy from this height. 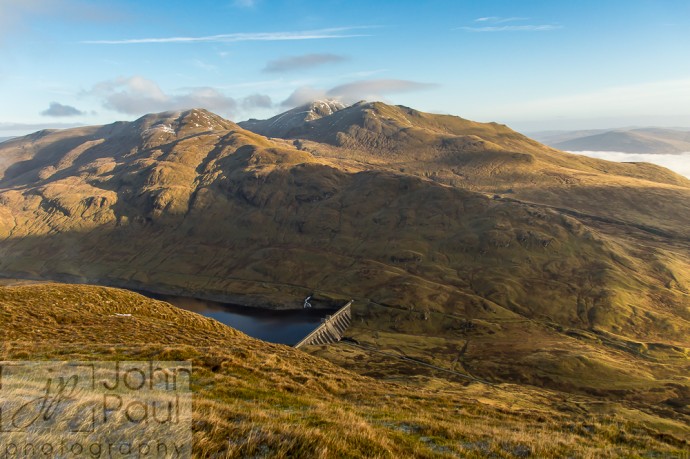 There's then a wee drop down, a stile to negotiate and then through the bealach and onto the final stretch, which is a steepish series of stone steps. Normally very handy but not when harbouring a thin covering of ice

It was now starting to cloud over which was a bit annoying, but also resulted in some nice rays on Loch Tay. 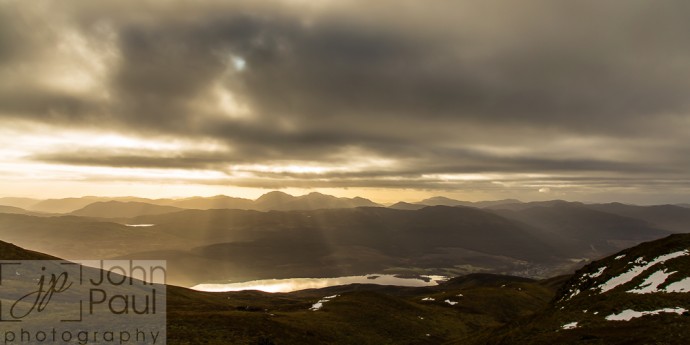 I was soon at the summit, enjoying a serious unhealthy coffee and not enjoying the fact that i'd left my sandwich in the boot of the car. Still, a lovely view from the summit cairn. 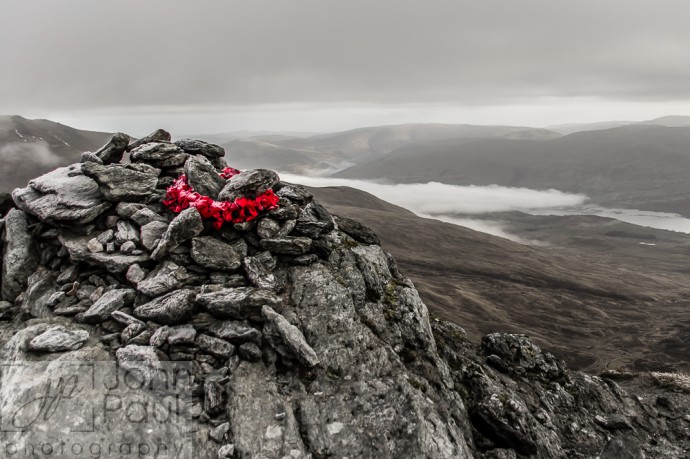 It was pretty nippy on top and with the lure of a cheese piece sitting in the car, I was soon heading back down. Got a pretty cool shot of the sun's rays bouncing up off Loch Tay as well. I've never seen this before! 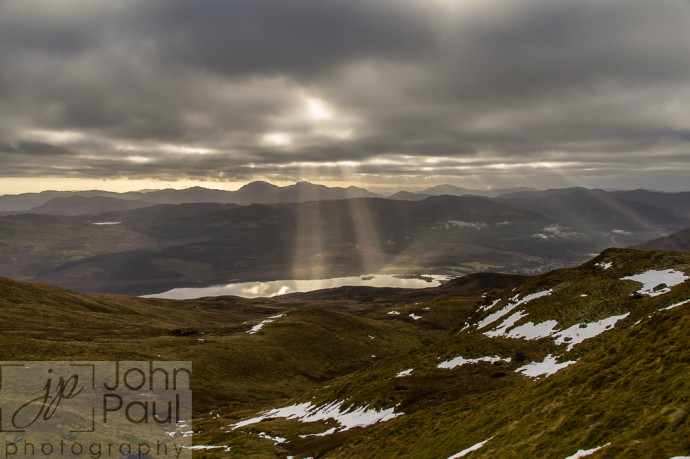 After this it was a quick jaunt back to the car park, passing a mass of walkers heading up the way. Weirdly as i got to the car, the inversion which had been hanging over the loch all day moved up the hill the disappeared.

Although unplanned, this was a very satisfying day.

A great day for views, JP, which you caught well with your photos. Would you have completed the ridge if you'd remembered your sandwich?

No, my intention was to do the Munro then nip to Killin and a few other places for photos before it got dark. I'll come back in summer and do the whole thing with my other half.

Great hill and great walk report. Really concerning to hear about issues at Invervar though. I've had problems there and apparently I'm not alone - Worth passing on this information to the local access officer.

It's extremely disappointing. I wish I'd taken a photo to pass on.

Shame about the sarnies, as the ridge is much the best feature on this walk - still ranks as one of my favourite hills. Still, you'll be able to discover the joys of the ridge another time

Lovely set of photos as always, the lighting is perfect. That road always worries me in the winter, hoping to head that way next weekend so hopefully it is ok!

As ever,,smashing pics there JP

Amazing almost all the snow has gone since me and Tomsie were up that way 2 weeks ago. Ive done the ones at Invervar,, couple of years ago now right enough,,interested to see what the score is with gates and fencing,,do keep us in the loop.

Nice photographs JP! on a lovely looking day, pity about the horseshoe though! Either you passed me or I passed you as I was doing the two Glen Lyon Corbetts from Innerwick, fine day for walking

Annoyingly, upon arriving at Invervar, I found that not only was the gate locked, but the estate have surrounded it with high steel security fencing. Are they secretly working on another Area 51?

We ignored their signs last month. Just go behind the building and hop over the small fence - or alternatively walk further down the road and take the next path on the right ignoring their signs to keep out (this is their "exit" signed route).