Tighvein: a waterfall & two lochs, but no monster...

Tighvein: a waterfall & two lochs, but no monster...


Over the last year or so, I've been trying to tick off Arran's Sub2K Marilyns. I was on the island again with family and friends for a long weekend in November, and after a shocking day's weather on the Saturday and patchy showers on the Sunday, the forecast for Monday looked terrific

... I had negotiated with my wife to get authorisation for a half day's walking, and I thought Tighvein should be do-able.
The slight problem with this was that we were based in Whiting Bay, and I didn't have an easy transport option up to the usual starting point at the Dyemill car park near Lamlash, as my wife needed the car and the bus times didn't suit

. On a first look at the map, Tighvein appears to be protected by fairly formidable forestry if approached from Whiting Bay. However, a perusal of Paddy Dillon's handy wee Cicerone guide to "Walking on the Isle of Arran" suggested that there was one way up through the trees, following the forestry tracks as far as the Allt Dhepin, and then picking up a sketchy wee path up the side of the burn, leading onto open moorland just south of Loch na Leirg. This is Route 12 in Paddy's book, and it looked like I could easily extend it to include Tighvein and maybe Urie Loch.
The holiday let we were staying in ("Helenslea", a lovely old hoose

) had another book in the bookcase that made this route even more attractive. "Tramping in Arran", by Tom S. Hall, was a grand wee guidebook first published in the late 1920s (although I think it was a 1960 edition that they had), full of local anecdotes ... and apparently Loch na Leirg has a monster! It's said that it has "the bill of a duck and the body of a seal", and that it quite likes to snack on passing "trampers"

, although Tom Hall does go on to say that it hasn't been spotted for a few hundred years. Well, naturally the possibility of spotting a giant carnivorous platypus just made the Loch na Leirg route irresistable

...
I got an early start, and Whiting Bay was looking unexpectedly tropical for November. I just followed the road uphill through South Kiscadale, which leads on to a forestry track signposted for Glenashdale Falls (one of several signposted routes to the Falls from Whiting Bay). It's a well-maintained track, with easy stepping stones where it fords a large tributary of the Glenashdale Burn near the start. A bit further off, a sign points off left to a wee side path for "Glenashdale Falls via Iron Age Fort". This leads to a grand viewpoint just a couple of hundred metres downhill, where there is a spectacular distant view of the Falls. I didn't carry on to the Iron Age Fort though, but just back-tracked up to the forestry track. A bit higher up, the track forks twice - the route goes left and then right, following signs for a cycleway to Kilmory. From here it's a long, curving route west then north around the moorland spur of Cnoc Mor, passing some Forestry Commission "Cloud Base" chalets, and eventually crossing the tumbling burn of the Allt Dhepin at a bend just before a lonely picnic table. Unfortunately, I completely failed to spot the wee path which runs up a narrow tree-free strip just to the right of the burn: it has a white marker post, but I only saw this on the way back down about three hours later ... anyway, here is a photo of where the path starts taken on the way back, in case anyone else fancies trying this route. 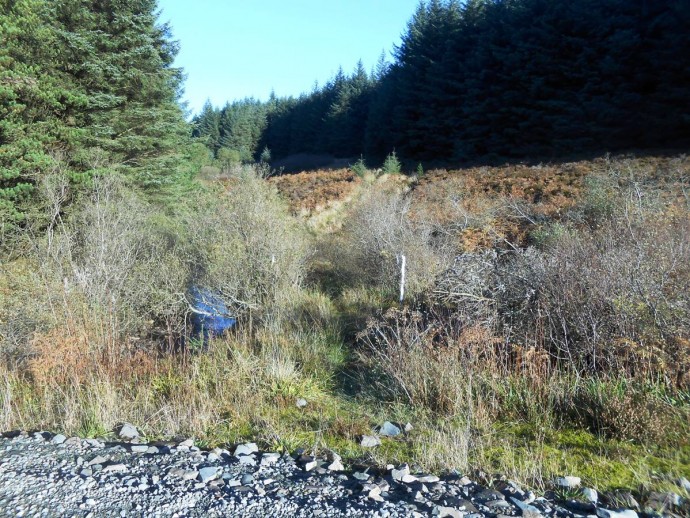 What I actually did, though, was to attempt to follow a narrow fire break a bit further up the track, which looked to be heading in the right direction. However, this quickly became blocked by fallen trees, and although jooking round them was good fun initially, it quickly palled. Unfortunately I'd neglected to bring a machete along 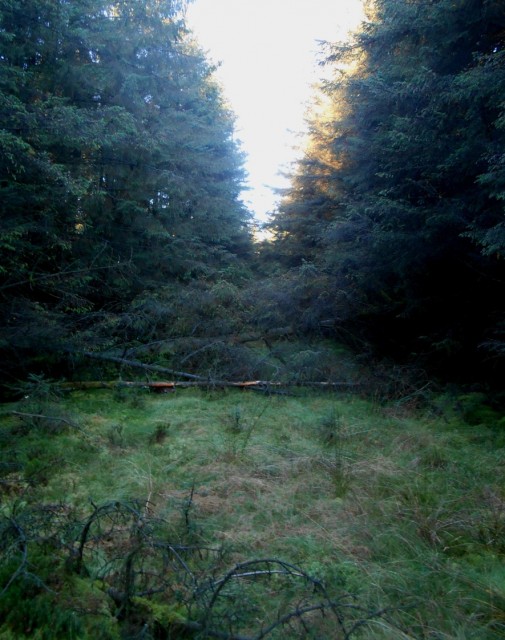 This was fairly mature spruce forest, and I did manage to pick a way uphill slowly between the trees, despite some "interesting" terrain en route: not recommended At long last, I made it out the top of the forest a bit west of the Allt Dhepin. From here I just headed northwest, uphill across the moors in the direction of Tighvein. There was a fine view south to Ailsa Craig en route. 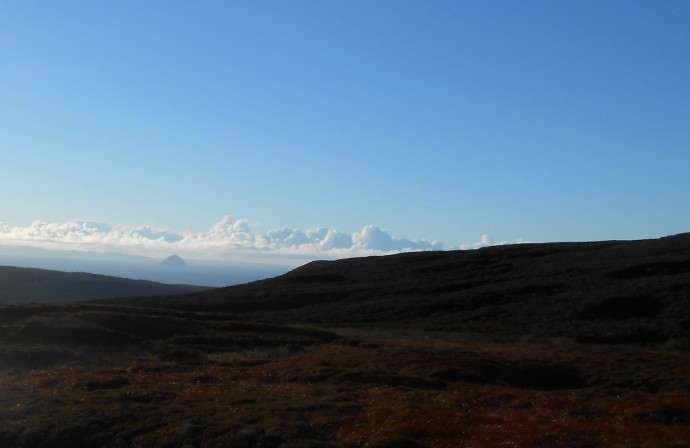 A bit further on, a line of old fenceposts headed off to the southwest, with Kintyre and Sanda Island visible across the Kilbrannan Sound. From here, Tighvein's cairn and trig point also came into view, just a few hundred metres to the northwest. 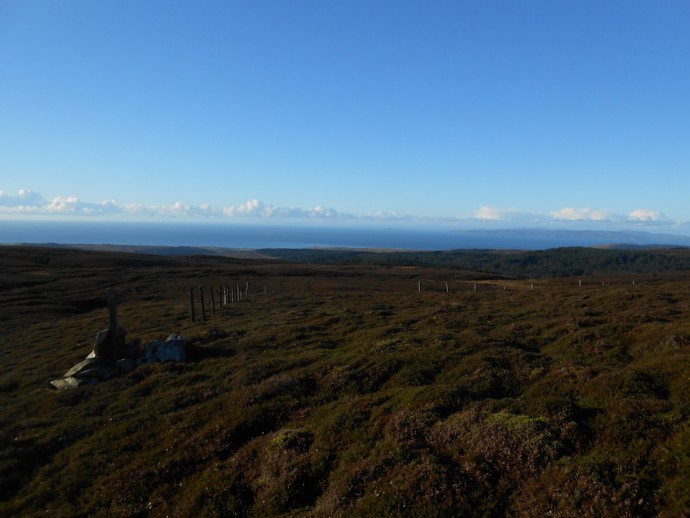 Like so many otherwise undistinguished smaller hills, Tighvein turned out to be a grand viewpoint, with Kintyre out west, Ailsa Craig to the south, the Ayrshire coast to the east, and of course the spectacular Arran Corbetts to the north. 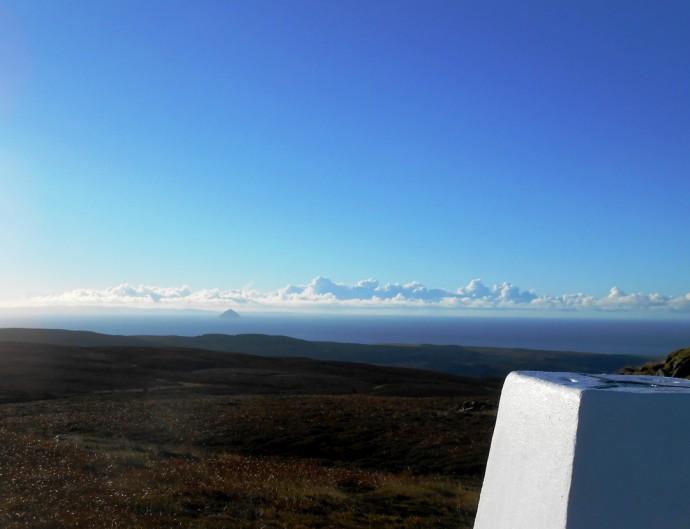 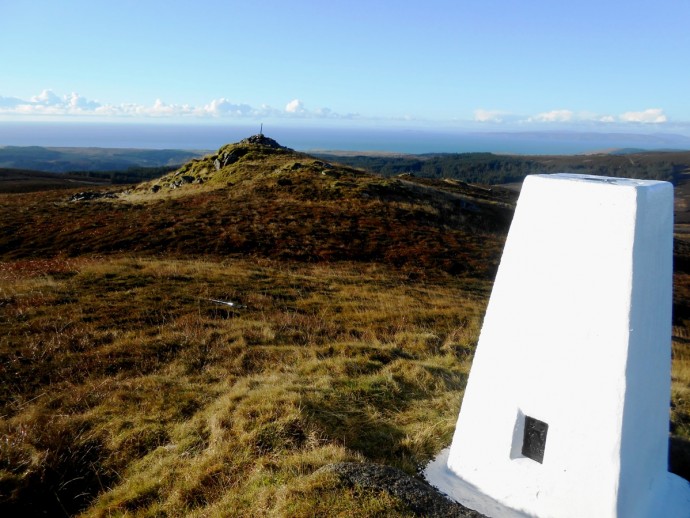 Having eventually gotten fed up taking photos in all directions, I took a bearing northeast for Urie Loch. Although pathless, the moorland gave surprisingly easy going and the loch wasn't far at all. It was another very bonny spot, with good views east to Mullach Mor of Holy Island, and north to the Arran Corbetts range. I skirted the south edge of the loch, and headed off on another bearing towards Loch na Leirg, hoping for a glimpse of that monster. Another nice view of Ailsa Crag on the way: 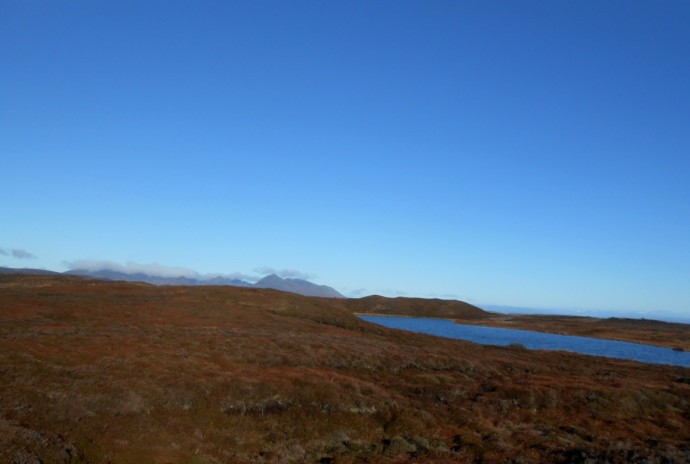 Disappointingly, the monster seemed to be nowhere in sight 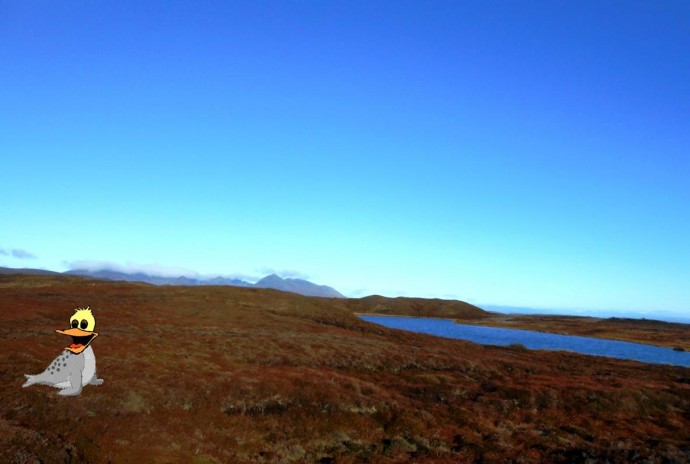 To my considerable relief, route-finding back down through the forestry was much easier than on the way up. After heading just a couple of hundred metres southwest from Loch na Leirg, the gorge of the Allt Dhepin was clearly visible, and I just aimed for where it entered the forestry, hoping to pick up the wee path mentioned in Paddy's book. And sure enough, the path duly materialised, giving a pleasant stoat back down to the forestry track, along the east side of the Allt Dhepin. 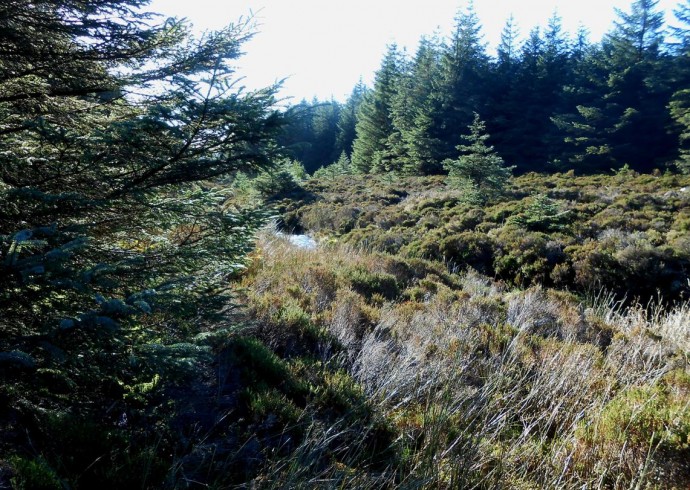 From here, I just plodded back down the track to my starting point. Tighvein may admittedly not be the pointiest of hills, but it's certainly a grand viewpoint when the sun's out

Re: Tighvein: a waterfall & two lochs, but no monster...

Re: Tighvein: a waterfall & two lochs, but no monster...

Cheers! I certainly lucked out on the weather for once...