Our trip up this bulky Aberdeenshire Corbett broke a couple of records for us - for the haziest views we've ever experienced on a hill walk, and for the most unexpected sight at a summit cairn. It also meant a "Morven compleation" - with the Morvens of Braemar and Braemore climbed previously.


morven.gpx Open full screen  NB: Walkhighlands is not responsible for the accuracy of gpx files in users posts

We were the second car to park up at the end of the road at Logie Coldstone. A well-dressed couple were enjoying a picnic on a nearby hillock, basking in the warm, hazy afternoon sunshine. A few minutes' walk took us to the abandoned farmhouse of Balhennie, which now seems to serve as a sheep hotel. Fluffy bundles stared at us silently from the dark interior. 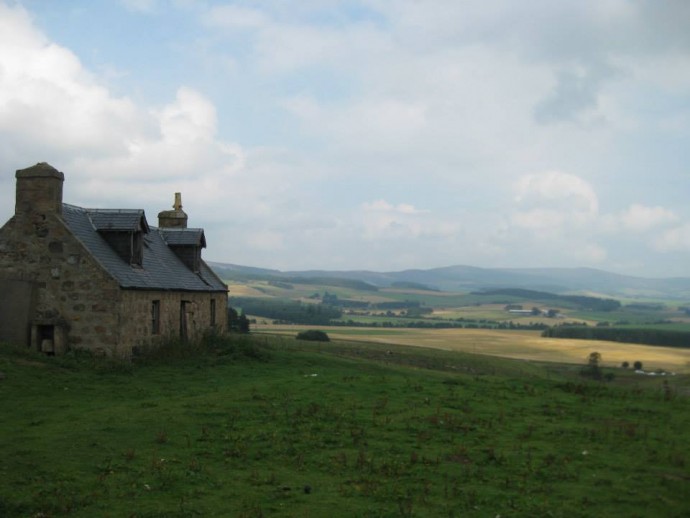 Beyond, the climb started in earnest. The main path goes straight up the fall line, eroded in places and making for hot work. This little fellow provided a welcome reason to stop. Eventually the sheep were left behind and the gradient eased as we reached the first shoulder. Morven is notorious for its false summits, but at least once you achieve the first one you know the worst part of the climb is behind you. Little Cairn and Mid Cairn were passed next, with the views increasingly hazy - ridiculously so once nearing the top. The top of Morven was a bright but barren, windy place; piles of rocks everywhere thankfully provided some shelter. If only it wasn't so hazy... Leaning back against the summit cairn and posing for a photo, I suddenly realised that the rock immediately next to me appeared to be moving. Jumping away in surprise, it became clear that the top of the cairn was absolutely swarming with wasps! 872m above sea level on this exposed summit wasn't the first place you'd expect wasps to be. I don't enough about wasps to even guess a possible reason for them being there... anyone?

Suitably puzzled, we left the summit and began the return journey, descending the stony slopes by, at first, the outward route. The haze appeared to be clearing somewhat as we arrived at the fork - turning right for the alternative descent. The patchwork of fields you can see from much of the eastern Cairngorms is something I'm going to miss once I move away from this part of Scotland. The path very briefly became extremely boggy once we turned off, but soon improved, with some new views south towards Roar Hill and Deeside beyond. Wait right until immediately before the track crosses the burn before turning off left - a couple faint paths just before this point seemed to fizzle out amongst the heather. From here, it was a gentle traverse of the slopes all the way back to the sheep hotel near the start. This is probably a Corbett best saved for a cold, crisp, clear day, as the views from the top weren't helped this time by the haze. But on any walk there's always something to see - the wildlife, both expected and unexpected, provided plenty of entertainment for us!

nice report - bet you got a fright when you realised you were sharing the summit with all those wasps!!!

Never seen the like of that! wasps on the summit cairn, there were certainly no sign of them last month when I climbed it, and I looked closely as I was looking for the summit log book which I heard was hidden in the cairn, but no sign, maybe the wasps had eaten it!

Pity about the haze but better than being tracked by the shooting brigade!

Wasps???? Did you get a fright? Sounded like a nice walk on the Corbett

. Not great it was hazing though!