The Sunday of the WH Autumn meet I was set to conquer the mighty Sgiath Chuil on my return back to Ayrshire (I'd actually planned to conquer it on the way up, but work and weather had scuppered that plan). So confident was I that I had boldly made such statements on the Saturday

But as my dear mother would have said “least said, soonest mended”

But lets face it the weather on that Sunday was rubbish. I mean, who would want to go walking on a day like this? 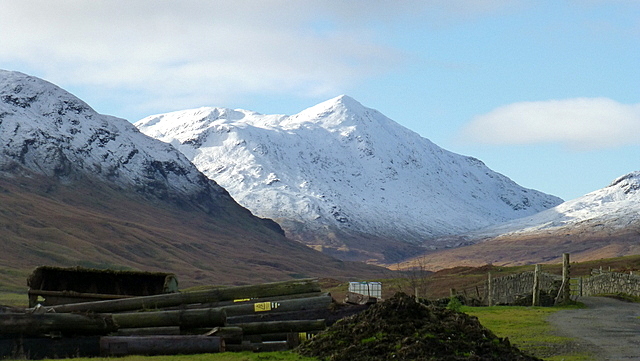 The appalling conditions of the weekend before

One week on and I had pencilled in a return to Glen Lochay to finally put this saga to bed. Arriving at the new (well, new to me) parking area I was struck by what a difference a week makes. Where was all the sna 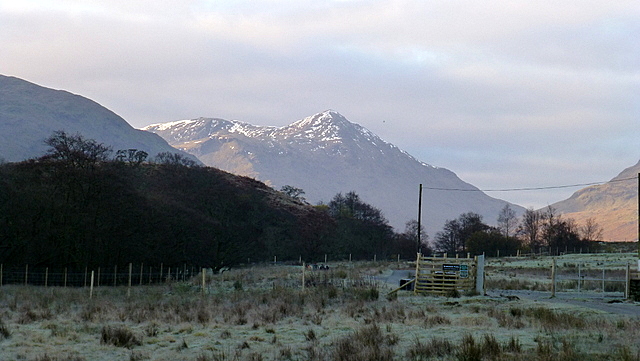 My route for this hill was a fairly simple one. I walked to the farm at Kenknock where the road then zig-zags up and over to Glen Lyon. At this point, rather than continue to the fording of the river Lochay at Lubchurran I chose instead to cross by the immediate bridge over the river and make my way up a zig-zagging forestry track (forestry now deforested) up to a stile over the deer fence higher up.

Glen Lochay from the forestry track 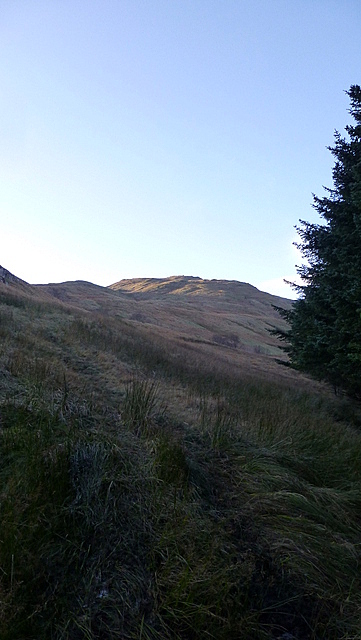 My initial route up

From here it was a case of picking up a boggy track to a dam over the Allt Innis Diamh. As height got gained views back to Meall a’Ghaordaidh and the Tarmachan ridge opened up nicely, as did views of Creag Mhor. Beinn Sheasgarnach looked every bit the lump I remembered it to be the day I slogged up and over it a few years back 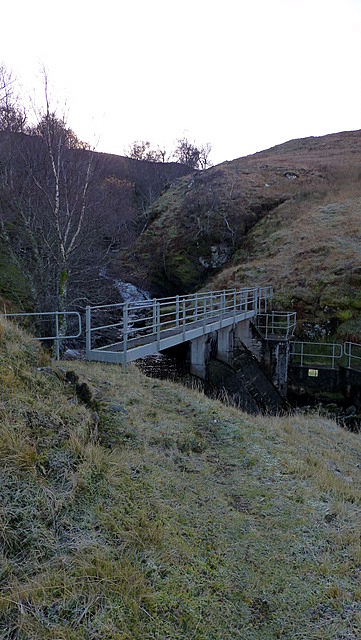 The next stage of the route involved navigating up and over or around and about various rises, and falls, hummocks and other annoying sticky up mounds to arrive on the north ridge of the hill, heading firstly to Meall a’Churain. 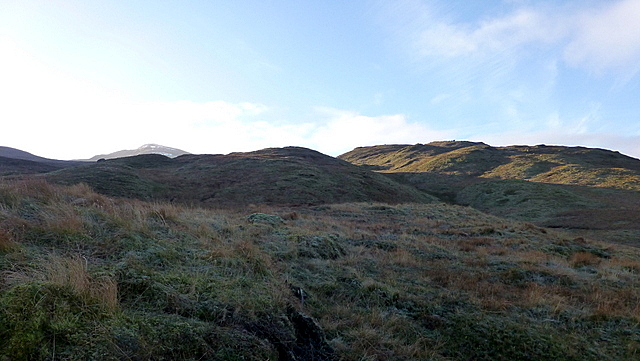 Up and down and round and about........the route ahead 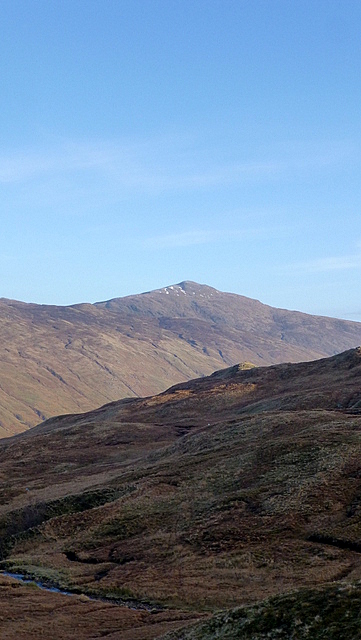 After that the next stage of the route involved navigating up and over or around and about various rises, and falls, hummocks and other annoying sticky up mounds that occupied the ridge (to be fair it wasn’t as bad as it could have been, but clearly this was not a nice gentle climbing ridge at this stage). 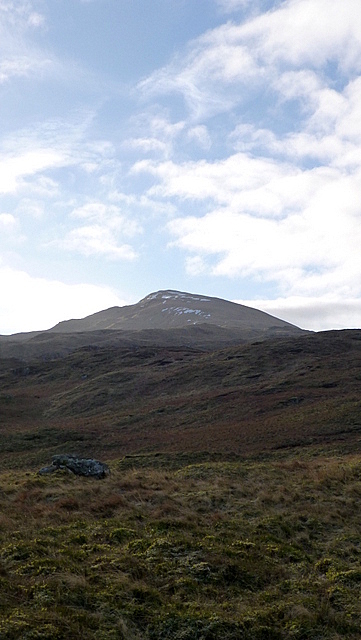 The next stage of the route involved…….a bit of a slog

Ok, so the rises and falls were done with now. Now it was just a solid slog up the ridge in order to arrive at the minor top of Meall a’Churain and the view across to the cairn of Sgiath Chuill. By now the early sunshine I’d been enjoying had been replaced with a thinnish layer of grey murky cloud as I made my way across the short distance to the summit.

Thankfully surrounding hills were pretty much cloud free, so views were still to be had all round, with Ben More and Stob Binnein dominant to the south, along with Ben Vorlich and Stuc a’Chroin. The Lui four to the west had more attention from the cloud and the steep sided Meall Glas was standing loud and proud directly to my right hand side, with the Corbett of Beinn nan Imirean peeking out further back 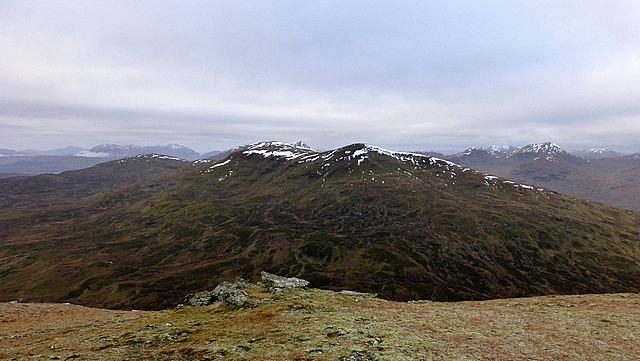 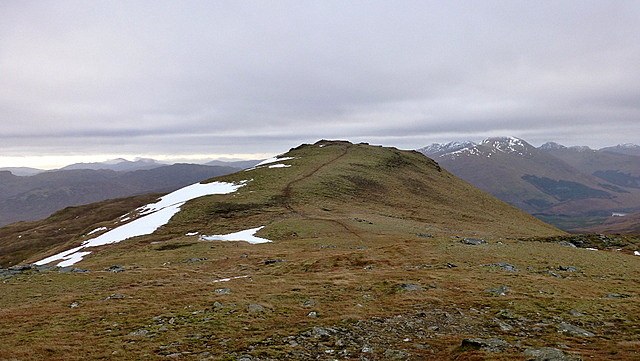 A hop, skip and a jump to the summit

Panoramic shot taken from the summit looking across Glen Dochart 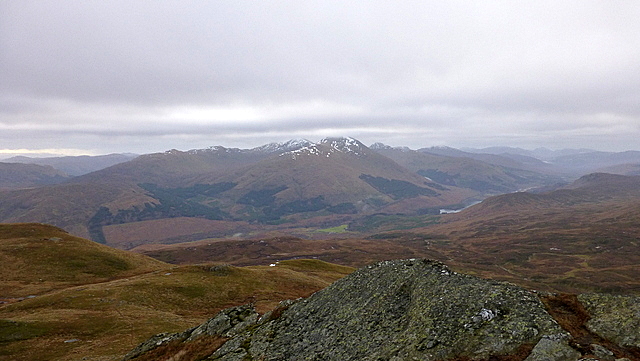 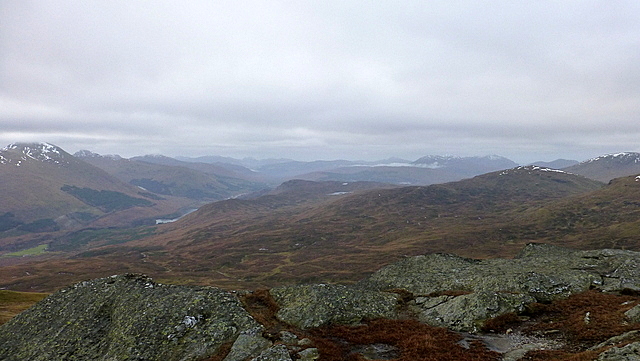 After a short stop on the top I was soon retracing my steps and looking for a route down the hills steep side to Lairig a’Churain, the saddle with Meall Glas. 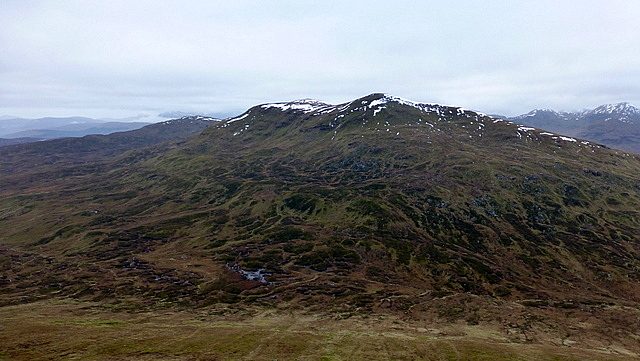 It was all very steep and in the end I happened across what I assume is a stalkers path (so more likely an animal track) contouring Meall a’Churain, which I followed initially. When that finally ended I then made a meandering descent (eventually steep) down to the saddle.

I’d no intention of revisiting Meall Glas on this trip, although was tempted at one point to pick off the top of Beinn Cheathaich, as I had missed that on my visit a couple of winters back. In the end though I didn’t give into that temptation, as simply rushing to the top and back down wouldn’t have done it justice. Instead I’ll happily save that for a return to do a round of Meall Glas and Beinn nan Imirean from this side of the hills 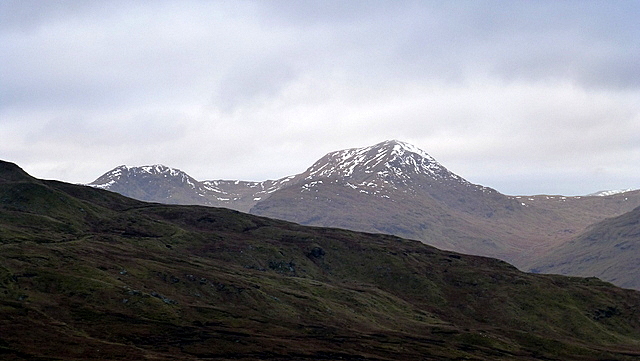 Once on the saddle it was another meander across some boggy ground to pick up the landrover track and the then easy (but sometimes steep) drop down to Lubchurran. The cottage here looks very nice now, all spruced up as it is 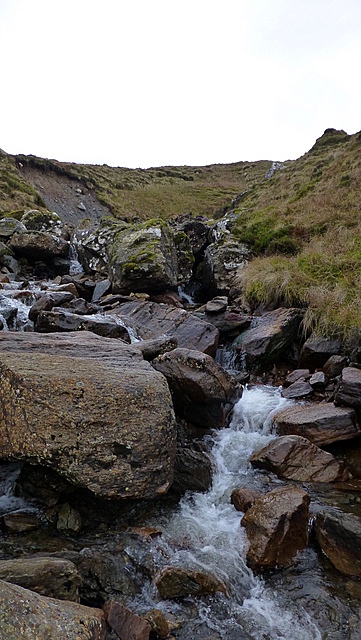 Burn running down from the saddle 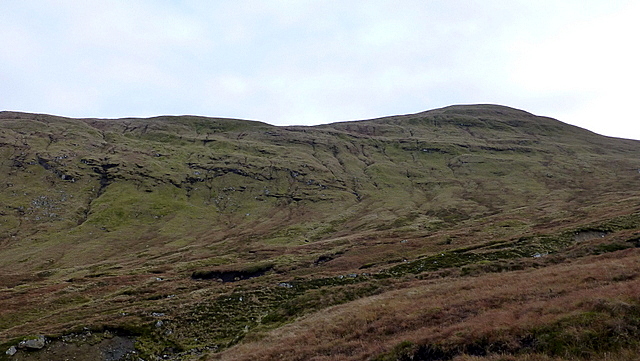 My route of descent is there somewhere 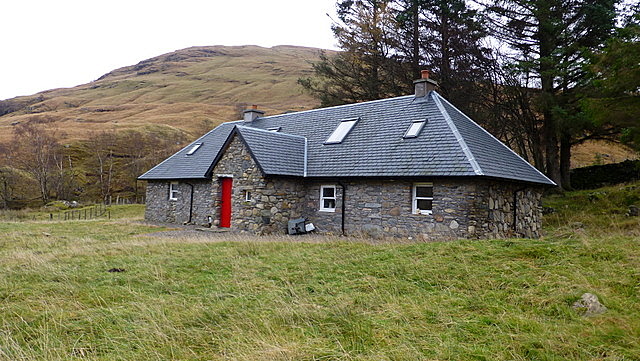 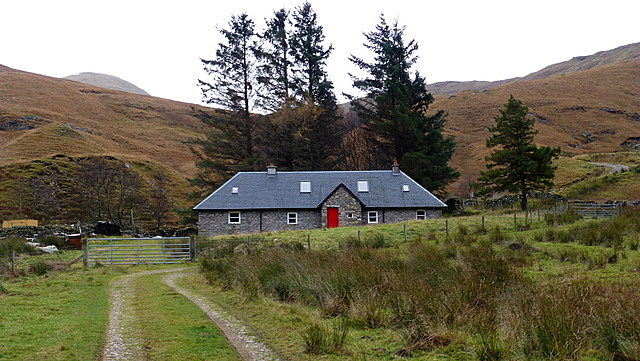 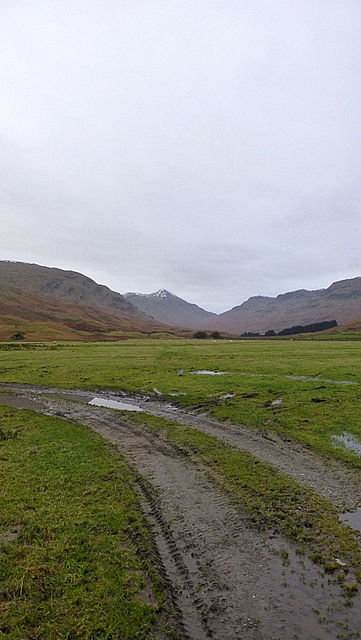 Managed to make a hash of the fording of the river Lochay for some reason. Usually I consider myself pretty adept at river crossings, but got something a quite wrong here. Clearly I needed to take a diagonal line from left to right, so it was quite a surprise to find myself heading straight ahead as I stepped into the water

Not too deep at first, but then as it got a bit deeper I could sense a dampening of the foot (well, feet if truth were told

). At the same time I appeared to put the willies up a number of fishies (Salmon I assume) who were jumping about all over the place as I disturbed them. This is turn led to them giving me the willies, with all their jumping about

With a dampening of the foot and the giving of the willies I decided then to run across the remainder of the water. Big mistake that

Once on the other side the correct direction of travel was obvious to see, but all too late. Still the walk back to the car certainly gave me time to dry out little on the way 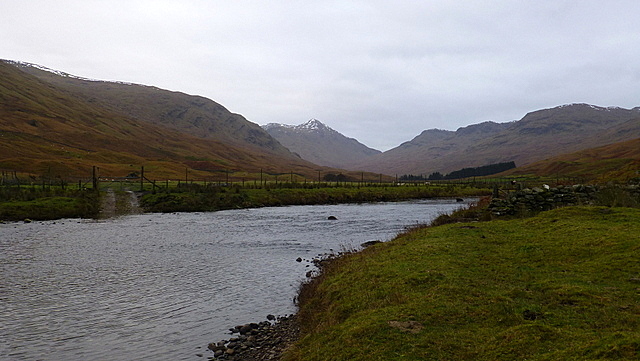 The fording of the Lochay 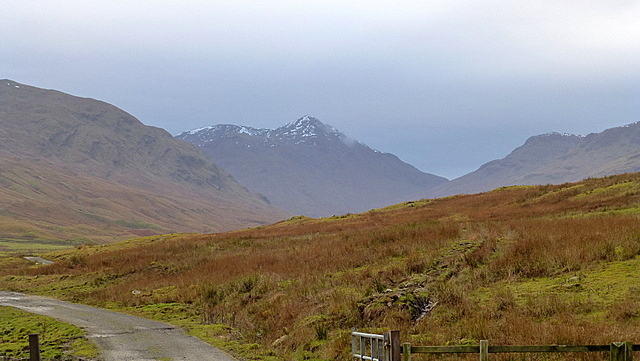 A rather ominous look over Ben Challum 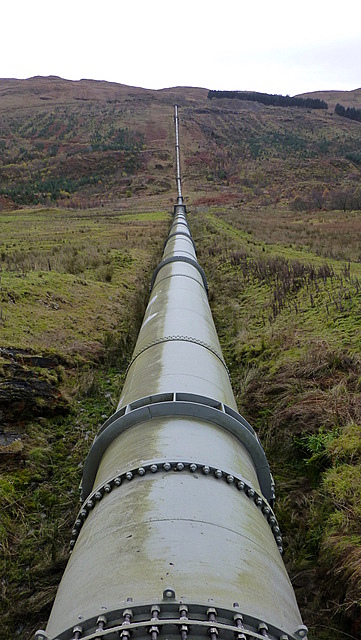 So that was Sgiath Chuil………at last. I couldn’t help but wonder when I was on the summit and the cloud had thickened that this would be a super hill to tackle on a crisp wintery morning, with a good layer of snow on the hills and clear blue skies. But what are the chances we’d get a day like that in Sco……oh…… 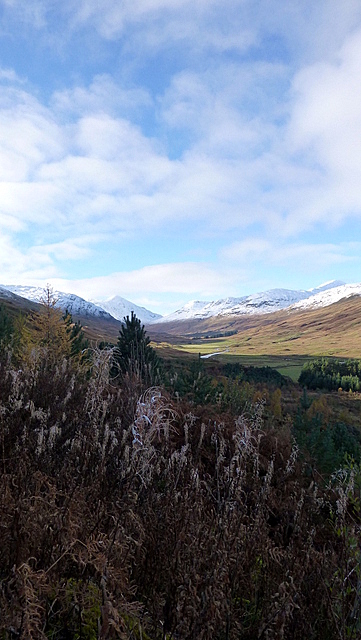 A flashback to those rubbish walking conditions from the previous weekend

Aye failed this one as well way back ,need to return ..will wait for hard frost

Some nice pictures there, Pete, and an interesting ascent route. Cameron McNeish describes Sgiath Chuil's summit as "a fairly undistinguished top", but I think it's an attractive, rocky place with good views. I hope you get clear weather when you come back to do Beinn Cheathaich; the view is particularly good from the trig point.