The four North Glen Lyon hills are of course usually done as a classic horseshoe route from Invervar. However, I'd attempted them anticlockwise with Andy C on a right dreich day in early March 2012, and we ran out of daylight (and, in my case, out of energy) on Meall Garbh, and ended up going home (Carn) Gormless, with only three out of the four in the bag

. I therefore needed to come back at some point to tick off Carn Gorm. At this opportune moment, I got a text from my pal Pam, who was convalescing after orthopaedic surgery back in July... Now, while this might have meant a year or more off the hills for most mere mortals, in Pam's case it just meant that she was slowed down to something like my pace

, and she'd naturally thought of me and suggested that we could tackle an easy Munro or two... I suggested Carn Gorm, and maybe carrying on to Meall Garbh which is the next one round the horseshoe, if we were making good enough time.

our_route.gpx Open full screen  NB: Walkhighlands is not responsible for the accuracy of gpx files in users posts
We got an early start, and when we arrived at the car park just past the phone box in Invervar, the sun was shining brightly

. Although the Chesthill Estate hadn't taken their "Stalking Season - keep away" signs down, we were mindful of the general "No Stalking On Sundays" rule, so we thought that we should be okay. Besides, based on my previous outing on these hills, my recollection is that the deer tend to stay to the east side of the horseshoe, particularly favouring Coire Chearcaill between Carn Mairg and Meall na Aighean. This turned out to be right enough - we didn't see a single deer on the western two Munros. By the looks of it, plenty of other people agreed: the car park was full, and the hills turned out to be surprisingly busy, with several other parties out enjoying the November sunshine

.
It's a lovely walk up from Invervar, on a forest track by the side of the tumbling Invervar Burn. As we neared the top of the forestry, Carn Gorm was still obscured by the trees, but the next hill along - Meall Garbh - was filling the head of the glen rather prettily. As the track reaches the top of the treeline, it crosses the Invervar Burn on a decidedly shoogly bridge. We should possibly have gone over one at a time On the west bank of the burn, an excellent path climbs towards Carn Gorm's south-east ridge. Our objective was in sight now, complete with a picturesque dusting of the White Stuff. To its east, the Munro Top of An Sgorr was looking surprisingly pointy. When viewed from down here, An Sgorr looks quite formidable, and almost deserving of being a fifth Munro rather than just a Top. This is just a trick of perspective, though: once up there, it turns out just to be a relatively minor rise on the ridge As usual, Pam was striding off purposefully up the ridge. As we got higher up, there were some grand views back down south-east over Glen Lyon. The sun was still shining at this point, and Carn Gorm and An Sgorr were looking unexpectedly mountainous for this range of rounded grassy hills, with definite aspirations towards pointiness Unfortunately, the sunshine didn't last much longer: all of a sudden, it clouded over, although thankfully the cloud remained well above the summits. Over on the south side of Glen Lyon, Ben Lawers wasn't looking so lucky, however! Another nice view over Glen Lyon, with some low-level mist still filling the glen a bit further east. Higher up, we encountered a wee bit of snow, although nothing to slow us down too much. If you don't believe me that Can Gorm is pointy, it was sporting a cornice, of all things From here the summit was closer than we'd expected. As we left the summit in the direction of An Sgorr, there was yet another nice view south-east to Glen Lyon. 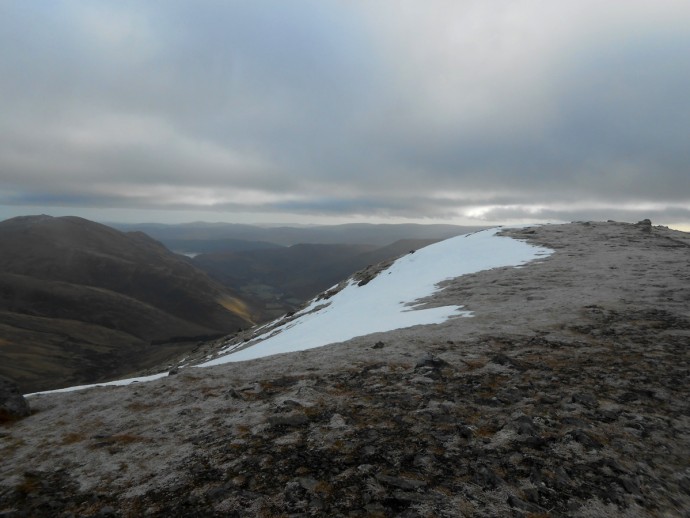 It looks as though most people completing the Full Bhoona of the four Munros give An Sgorr a body-swerve, as there is a well-established bypass path. However, as we were only planning on doing the western two Munros, it would have been a shame to miss An Sgorr. It's a fine wee hill, with a small but shapely cairn and everything. We were momentarily tempted to carry on right round the horseshoe of the four Munros, as Carn Mairg and Meall na Aighean were clearly visible over to the east, and didn't look that much further. Common sense prevailed however, and we didn't go any further round than Meall Garbh, with its bizarre Tate Modern-style cairn, festooned with old iron fence-posts. Meall Garbh is a fine viewpoint. Back out to the west, Carn Gorm was still looking unexpectedly pointy. The best views were probably out to the north and north-west, however, with Carn Gorm's sweeping north-west ridge leading down to a sea of low cloud over Loch Rannoch. From Meall Garbh's main summit, we left the main route round the horseshoe to descend south-east to Meall Garbh's slightly lower south top, which sports its own diminutive cairn. There were fine views south from here to the Lawers range, and back west to Carn Gorm. From the south top, we took a bearing SSE towards the top of a tributary burn of the Invervar Burn, hoping to follow this back down to the main track. Somewhat to my surprise (my navigation isn't normally so reliable!), this worked perfectly, and it was an easy descent. More fabulous views across the glen to the Lawers Range on the way down. A bit lower down, we found a grand big rock to perch on for a spot of lunch. (Since you ask, I had M&S Turkey & Stuffing sannies which my wife had got reduced the previous evening; Pam's lunch wasn't quite so grand - cheese and pickle sandwiches as far as I recall...) It was a perfect spot from which to admire the autumn colours down in Glen Lyon. We made it back to the car in less than five hours: slightly ahead of schedule, which is an unusual experience for me

! So that's Carn Gorm ticked off at last: a blue balloon on the Blue Cairn

Nice photographs, it was all misty when i done these. Well done

scooby0511 wrote:Nice photographs, it was all misty when i done these. Well done

Thanks! It was a better day than the forecast, for once