An Socach, Munro No. 57, and a wee neighbour

An Socach, Munro No. 57, and a wee neighbour


With a couple of corbetts or a Munro on the cards, we decided on An Socach to add another blue balloon for me in the area. Another lovely day in prospect as we headed down the A93 to our starting point at the area of forestry, gate marked for the Invercauld Estate.

There isn’t a lot of parking here but we got the 2 cars parked up at the gate, and there is a small layby across the road with room for another 2-3 small cars too. Very icy underfoot here due to compressed snow at the roadside. Booted up and headed off shortly after 9am. We got a friendly wave from a chap in a landrover, think he had been in putting out feed for some white ponies we saw in an adjacent field.

We were going to use today as a chance to practice some of my recently learned nav skills so on taking the left fork just after crossing the burn, we spotted the wee house at Baddoch and used this for our first bearings check. So far so good. On passing the house, we went off on to a rougher patch of ground and checked the map, the ruins of the building were on our right,,should have been left. So,,we jumped a fence down to the path at the burn. I was enjoying using the map to identify ground features, island in the burn, old ruined buildings etc and points where the path and burn parted then rejoined. John pointed out Sgor Mor above us with the steep sides of Coire Chrid. 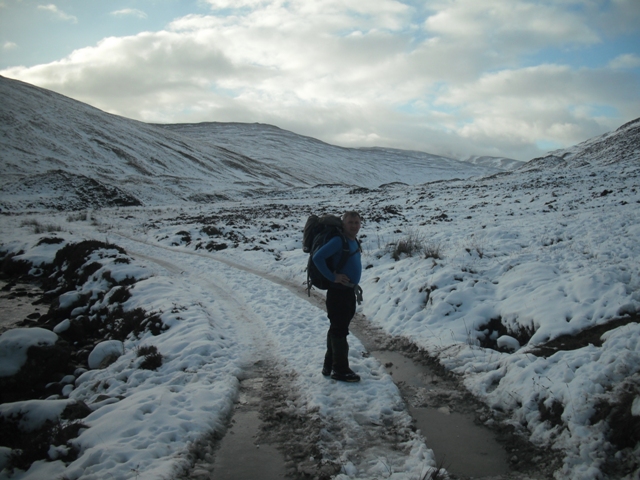 On the road in

We had discussed two options,, John having done this hill before, had climbed around Sgor Mor, behind the finger of land marked at 855 on the map and up, returning over the front of An Socach. His suggestion this time was to reverse that route. Me,,I just wanted to have a good day lol.

Using the map, identified the 2 fording points on the Baddoch Burn before we could clearly see the first objective, the large, well built cairn on a spit of land above Socach Mor. Pretty heathery and snowy but able to see tracks from the previous day which helped on the way up. The cairn here looks more like a memorial but nothing to indicate what for, not just your normal heap of stones.

From here, its down a bit, (a very small bit) then over and up a fairly steep sided section. On reaching the top of the rocks, it’s a slight but flat incline up left and over to the cairn at the first top of An Socach at 938mtrs. 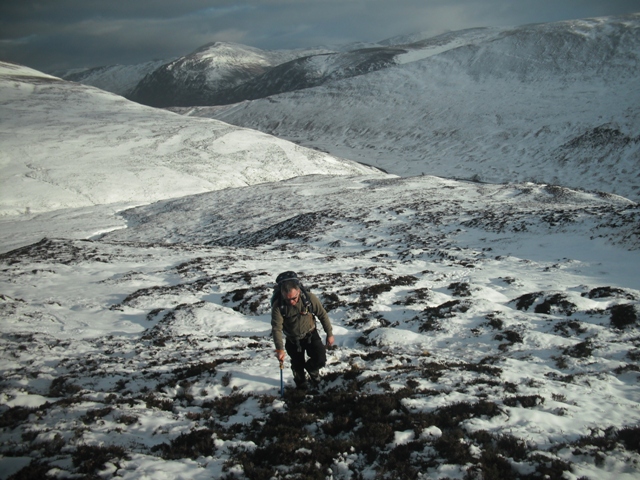 On up and proving im not always at the back

The views North East showed a build up of dark clouds, wind direction was in our favour here, so fingers crossed. From here you can see the undulating but relatively flat expanse arching to the West and the summit cairns of the true top. We had seen at least one person behind us at the lower cairn. 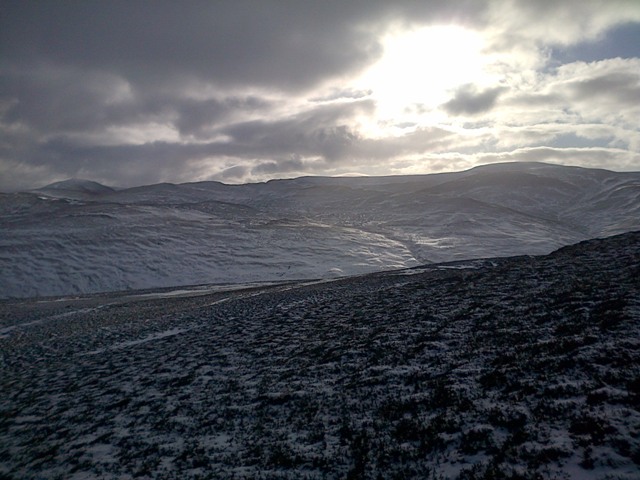 Aware of daylight etc and knowing we were planning a circuit rather than a straightforward return, we simply headed off towards the summit. This took about 45 mins and gave us a good opportunity to enjoy the surrounding snow covered hills. 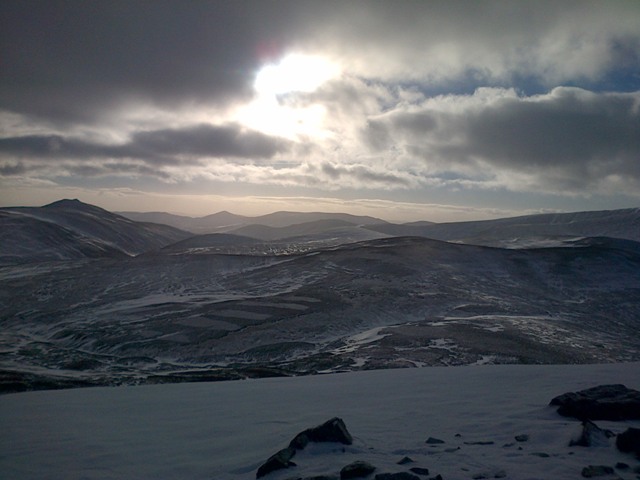 Looking South, Gulabin on the left

Both cairns covered at the 944mtr summit,, my 57th Munro, girls doing well!! 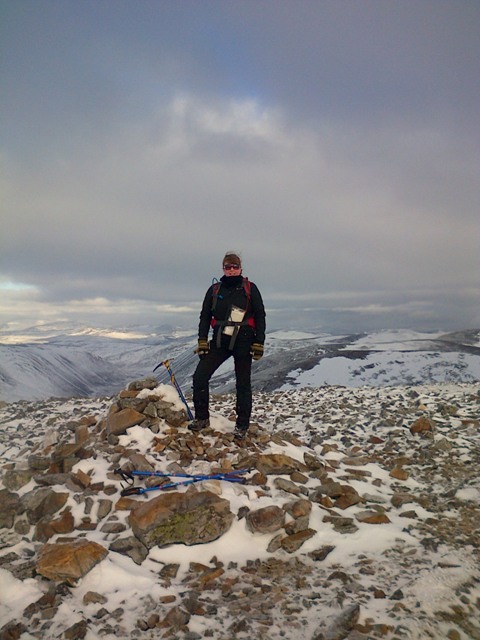 Found some shelter from the biting wind under the first cairn, bite to eat and a chat. One of our followers arrived at this time and passed us to get to the second cairn. We didn’t hang around too long,,icy icy icy.

Heading off, another walker passed us on our way. Poles away etc to let me get my hands in my pockets,,,the cold really got to them at the top so had to get some heat back. We strode off and a little before the lower top, we headed down into Coireachan Dubha, it looked far from Dubha under its snowy blanket and heck,,I even broke into a wee run on 2 occasions, not so easy once we hit the deeper stuff.

John took the time here to point out the hills to the North, snowy glory and a whole new area to me, some of the names meant nothing, but Im sure I will see them soon. Smashing broad flat area as we headed over towards Sgor Mor. Initially , the plan was to drop to the wee Bealach under Mor and back down and round the hill, but on reaching it, we decided we had plenty of time, prob around 2pm at this point, so headed off up the path.

We had seen a couple at the cairn on Sgor Mor from across the Bealach and stopped for a quick chat as they descended. This isn’t such a steep section but my legs felt it here, been a fast day, on top of my 4 Munros from yesterday but made it up and over to cross the gentle incline , reaching the small cairn at 887mtrs. 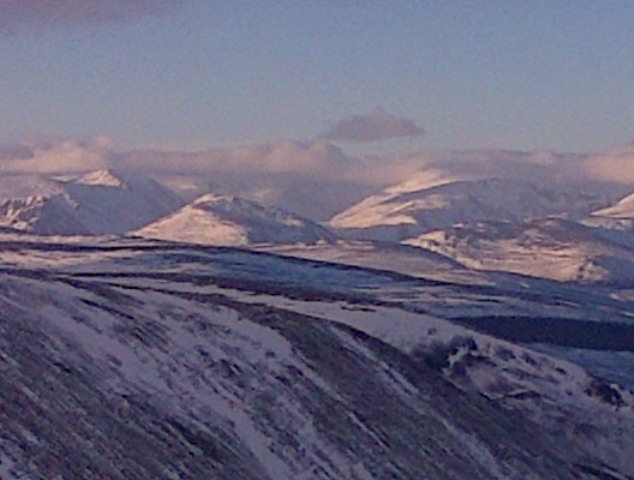 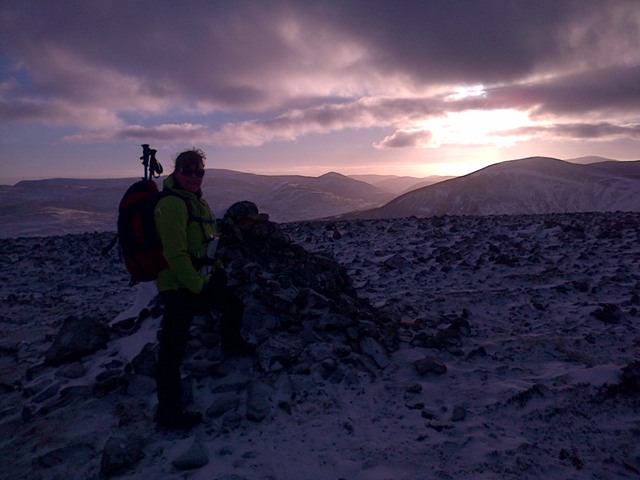 The sun was getting low in the sky now and casting lovely pink and orange rays over us. We took some pics, map bearing and headed off. Im always a bit worried when anyone suggests heading “straight off” yeah,,you go check how straight it is mate! 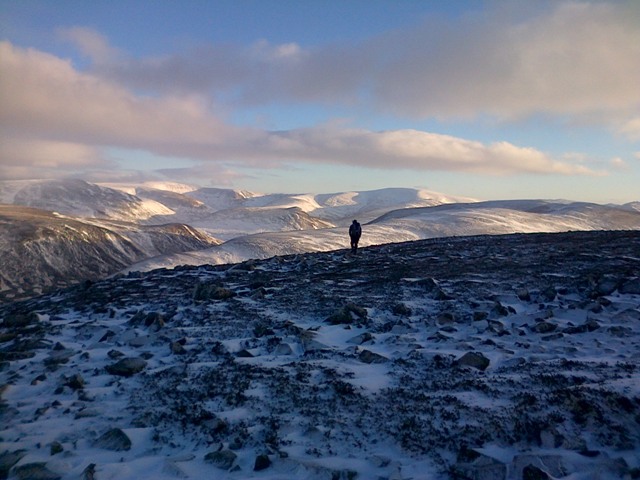 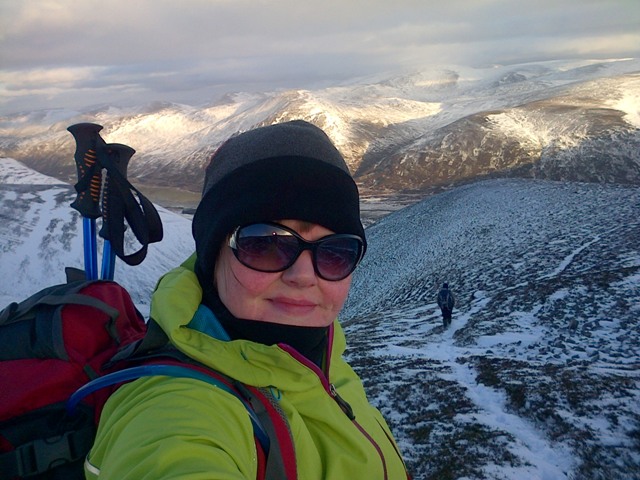 From below, its easy to see how you would skirt to the south of Coire Chrid but we opted to follow the footprints and path of the previous peoples ascent round and straight down into the Coire. Steep in parts and icy underfoot as the sun probably hadn’t reached this place in weeks. We had wanted to avoid coming down into the trees but thankfully, this path brings you down to the burn and continues beside, rather than in, the forest. Still plenty of daylight as we crossed the burn via some rocks and skirted round and down.

Approaching the house at Baddoch Burn, we had to negotiate a rickety wooden bridge, no handrails, snow and ice on top. I kicked one of the first planks to get the snow off my boots,,the plank fell off and into the burn below lol Not a good sign. We started looking for ways to cross the burn directly, only a short distance from the car so I wasn’t bothered by wet feet at this point. Then John suggested we just shimmy over the bridge on our hands and knees. Hey if it works,,don’t knock it. Off we went, John taking the lead, man that was hard on your knees, hard ice on the planks. Dignity? who needs it? Made it over and negotiated the last half mile or so of icy track back to the car.

Hashed up some grub from supplies in the boot while John boiled up for a wee coffee. Dry socks and boots and still plenty daylight. Bliss

Thanks to Tomsie for doing a repeat but letting me get another one in the bag. Smashing day, yet again.

Good day just what we needed for exercise, thanks for the tips.

Good to get a different hill in too.

Another good report too, nice reading it.

Tomsie wrote:Good day just what we needed for exercise, thanks for the tips.

Good to get a different hill in too.

Another good report too, nice reading it.

A fine wee winter hill and you some nice photographs there, great stuff. Just checking your hills and number of walks of late, I bet your feeling hill fitter than any other time of your life! Totals are adding up and looking impressive

The Rodmiester wrote:A fine wee winter hill and you some nice photographs there, great stuff. Just checking your hills and number of walks of late, I bet your feeling hill fitter than any other time of your life! Totals are adding up and looking impressive

Yep,, defo had a lot of hill time this year,,working on improving my pace now too,,,need to stop admiring the views so much,,,(but i LIKE admiring the views lol) The biggest difference i see is my recovery time, sore legs are a thing of the past following a day out. lol

GillC wrote:
working on improving my pace now too,,,

Walking every week is certainly helping that

GillC wrote:
working on improving my pace now too,,,

Walking every week is certainly helping that

What happened the Heinz