With the exception of Lochnagar, the Munros of the White Mounth are usually all explored on a long circuit which takes in all of them at once. However, we'd climbed Lochnagar before (our first Munro), but never visited the valley beyond the western end of Loch Muick. The plan was therefore to follow this valley up past Dubh Loch, before ascending the slopes to the south and just taking in Cairn Bannoch and Broad Cairn.

The weather forecast suggested a low chance of morning drizzle, but a 70% chance of cloud-free Munros and light winds. The drive up through Deeside to the Spittal of Glenmuick was promising, despite clouds covering the side of Lochnagar, and getting stuck behind an oil tanker on the spittal road! Parking up though, we could see clouds and clouds of midges through the windscreen...

They descended on us in their thousands immediately after we opened the doors. The activity of getting one's boots on has scarcely been completed so rapidly, and was achieved whilst hopping desperately around the car park, trying to escape the biting monsters. Granted I haven't spent much time on the west coast, but I've never encountered so many midges before. The swarms dwindled to just a semi-dense cloud on the track down from the car park, before clustering horrifically again around the visitor centre and toilets. Three months on, I have an enduring memory of slapping at my face and being bitten whilst trying to go to the loo...

Upon leaving the trees and visitor centre behind, the midges left us too, and the rest of the day was thankfully midge free. The loch was lovely and still, and quiet thanks to it being a weekday. 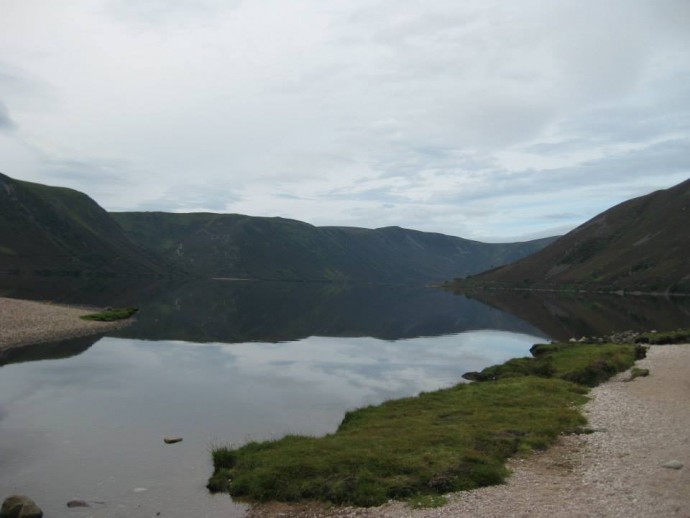 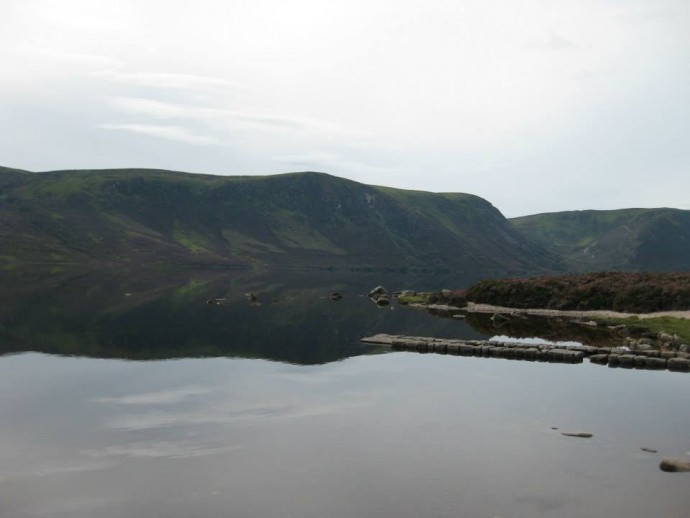 We headed round past the boathouse and began traversing the northern edge of Loch Muick. This can be a tedious journey at the end of a long day, but it was a pleasure early in the morning and we just enjoyed the peace and quiet. The large building at the Glas Allt was reached before long, which marked the limit of where we'd explored before (we descending from Lochnagar to here in September 2011 - our first Munro). Loch Muick's only islet is just across the water from here. We left the trees behind again, Broad Cairn rising majestically above the valley ahead. The clouds seemed to be parting too. The path ascended gently and forded The Stulan Burn below an attractive cascade. This really was a lovely area and path, although it didn't really appear to be suitable for cycling, as one guy was attempting to do. He seemed to be carrying the bike more than he was riding it... Soon we came over a crest and Dubh Loch was laid out before us, with the huge crags of Creag an Dubh-loch on the southern shore. Apparently these are famous climbing routes, and it's easy to see why. After having a rest on a beautiful sandy beach, we headed up on the north bank of the stream, which flows over wide bands of exposed rock here - making it look a bit like a giant water slide. At the top of the first slope, the stream drops in a waterfall through a series of small holes in the rock, re-emerging by way of a narrow gorge. A tiny feature, but interesting to come across and unexpected. We crossed the stream just here and began cutting across in a southwesterly direction, then southeasterly, ascending the slopes between two areas of crags. Another couple were doing the same thing so this seemed like a fairly popular route up. There were a number of mountain hares playing near the top of Cairn Bannoch. From Cairn Bannoch there were great views back over the valley we'd ascended from, with Lochnagar behind. The views to the south were more hazy, with a few wisps of cloud (and perhaps some rain) covering the higher tops around Glens Clova and Callater. From here we joined the bagger's route, leaving Cairn Bannoch behind. The path here turned out to be a bit of a motorway, heading directly for Broad Cairn, Munro number two. The views over Loch Muick from here are magnificent (not surprising given Broad Cairn's prominence from Loch Muick itself). There were now some heavy showers (not forecast) over Deeside as well, but the immediate surroundings were bathed in sunlight. Another eroded track led down from Broad Cairn towards Sandy Hillock. There was a choice here - descend on a path down to Loch Muick, or stay on the higher track along the ridge. In wind, rain or fog the lower route would seem a better choice, but today we stayed on the ridge for some amazing views down Glen Muick, and back towards Broad Cairn. 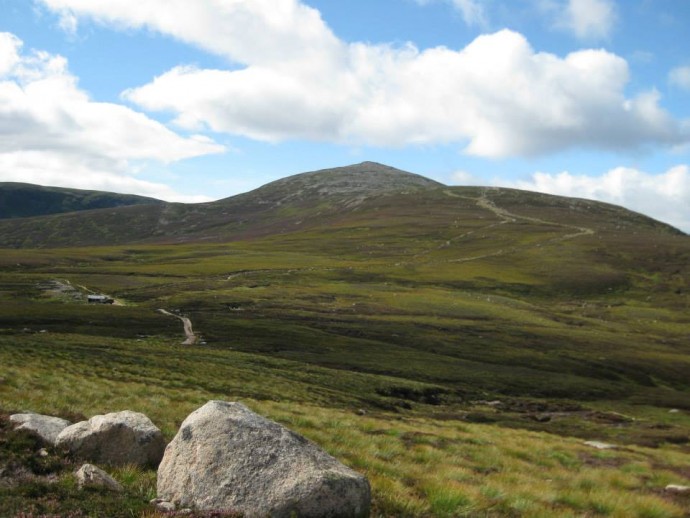 If you're not in the mood for all five White Mounth munros, and you've already climbed Lochnagar, this is definitely a decent alternative. For us, it was a lovely sign-off to the best August for exploring that I've ever had

(edit: except for the midges, which feasted on us once again when we returned to the car. They also managed to get inside the car, and continue to feast all the way back to Aberdeen, even with the windows open. And one or two even followed us back into the house!)